General Mills could make Easter-themed Lucky Charms with all the holiday’s symbols. The jingle practically rewrites itself: lamb, fish, and rabbits; pastel eggs in baskets; butterflies, palm branches; and some hot cross buns!

And then there’s the Easter lily.

Attend an Easter service anywhere in North America, and you’re bound to see white, trumpet-like flowers anchoring the floral arrangements, or at least pick up their strong perfume. Also known as Bermuda lilies, or Lilim longiflorum to the horticultural crowd, Easter lilies became the go-to flower for the spring holiday on American shores in the 20th century. Yet the lily’s ties to Christianity were established long before.

They’re mentioned in both the Old and New testaments of the Bible, referenced several times in the Song of Solomon as well as in the Sermon on the Mount. Legend has it that lilies also grew tall in the Garden of Gethsemane from the Agony of Christ.

They’re viewed as symbols of purity and rebirth. In ancient Egypt, water lilies represented creation and regeneration, innocence and modesty. According to Greek mythology, lilies were identified with the goddess Hera, who was believed to have created the flower from her milk.

Later, in the Christian faith, they became associated with the Virgin Mary, as well as the resurrection of Jesus, an event that’s commemorated every year on Easter.

Much as the lily’s significance has traveled through time and traditions, Easter lily bulbs have traversed the globe. Native to the Ryukyu Islands in southern Japan, the species was discovered by Swedish naturalist Carl Peter Thunberg in the late 18th century. Thunberg brought the lily to England, from where it later reached Bermuda in the mid-1800s.

Commercial production took off in Bermuda. By the turn of the century, the island nation was responsible for growing the majority of North America’s Easter lilies, though its streak only lasted a few decades. Production shuttered after a virus ravished the crop in the late 1800s, passing the bulk of the Easter lily market back over to Japan.

The flower’s commercial presence in the United States was forged by the World Wars. It’s credited with arriving on American soil in the suitcase of a World War I soldier named Louis Houghton upon his return to Oregon from Bermuda in 1919. Houghton, as the story goes, shared the seeds generously with friends and family.

It was not until World War II that production boomed in the United States, however. Following the events of Pearl Harbor, the Japanese Easter lily supply dried up, creating a domestic demand for the crop that caused its value to surge. It became known as “white gold” on the West Coast. By the war’s close in 1945, upward of 1,000 farmers had started cultivating the flower, finding particular success along the Oregon-California border.

Today, a slim, coastal stretch between the Harbor-Brookings and Smith River areas of Oregon’s Curry County and California’s Del Norte County, respectively, has come to be known as the “Easter Lily Capital of the World.” A wooden sign erected near the Smith River city limits announces as much to anyone passing through.

The industry has become more concentrated over the years, with just four commercial growers now producing all of the Easter Lily Capital’s bulbs. Their efforts not only account for the Easter lilies circulated around North America but are also commonly cited as representing 95 percent of the entire potted Easter lily market.

The majority of the bulbs grown in Smith River are sent to Canada, says Justin Riggs, the agricultural commissioner for Del Norte County, who notes that Puerto Rico also fills a large annual order. Other bulbs are sent to Europe, Asia, and elsewhere, where they’re forced into bloom in carefully controlled greenhouses.

It’s a fickle business, considering Easter falls on a different day every year. To ensure the flowers are ready in time for the holiday, their environments are strictly monitored. Temperature, moisture, and light are constantly regulated to ensure optimal growing conditions. 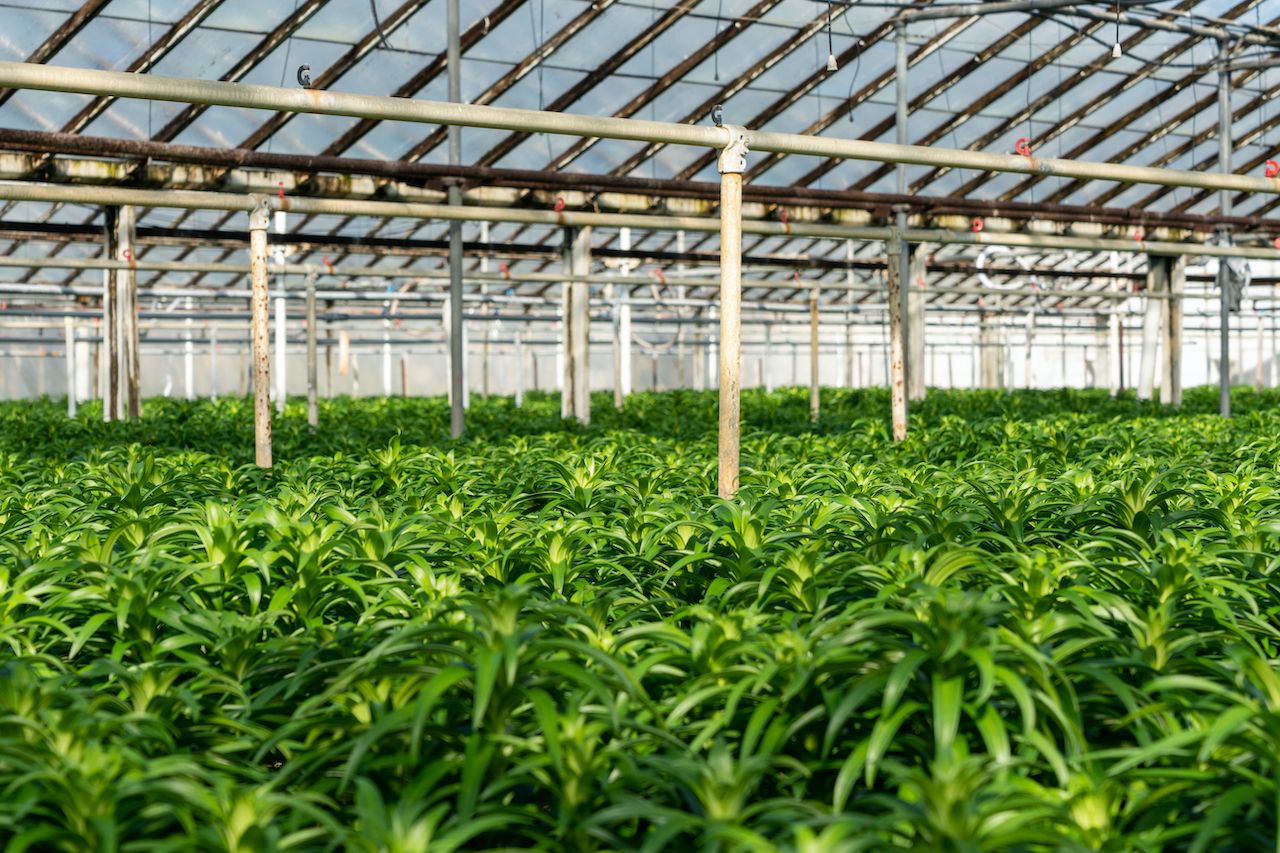 It’s also a fickle flower that takes over two years to grow, though it’s suited to the West Coast.

“Long days and sunny summers are great for the crop,” explains Riggs. “Smith River specifically is warmer than other coastal parts of the county, and that really lets the bulbs get going.”

Along with Easter lilies, Del Norte County’s main agricultural industries are cattle, dairy, and timber. The county’s annual agricultural value is in the 40-60 million range, with lily bulb production accounting for 10 million of those dollars each year.

It’s a wide range. Timber production can fluctuate wildly, says Riggs, who also notes that, save for a small yet steady decline, the Easter lily demand is as stable as the holiday itself.

Yet, like so much else over the past few weeks, Easter is in jeopardy of being canceled this year, so to speak, due to the coronavirus crisis, much the way St. Patrick’s Day celebrations were impacted earlier this month. And as Easter gatherings go, so does the demand for Easter lilies, a concern growers are now working to reconcile.

It remains to be seen how the outbreak will affect the potted Easter lily industry in the post-COVID-19 world. But there’s always an alternative to buying your holiday blooms: growing them yourself. According to Riggs, who’s propagated them personally following commercial methods, Easter lilies are far more manageable in a home setting.

Just don’t expect them in time for Easter.

“They start breaking from the ground around the new year,” says Riggs. “Then, around here at least, they bloom naturally, if you don’t force them, right around the Fourth of July. And they’re really just the perfect thing to put around the flag.”

National ParksThe 7 Most Fascinating Flowers Around the World You Need To See in Person
Tagged
Holidays Religion
What did you think of this story?
Meh
Good
Awesome