In the cannabis space, sustainability is an exercise in paradoxes.

Despite a general ethos of respecting the environment among growers, cannabis is a taxing crop due to the plant’s high demand for resources like water and electricity. The industry is coming of age at a time when environmental scrutiny is playing an unprecedented role in consumerism, making it subject to the demands of an increasingly eco-conscious public. That public, however, is largely undereducated in sustainable practices.

Some activists worry that mass-produced cannabis can never be truly sustainable. Independent growers and brands are changing their business models so that it doesn’t compromise the environment, yet current regulations are hindering that mission.

Take buzzwords like organic and biodegradable, characteristics that buyers have been conditioned to seek out. In truth, neither is accurately represented in the cannabis, or any other, industry.

Federal regulations prohibit cannabis from being labeled as organic, regardless of cultivation practices, because cannabis is illegal at the federal level. Biodegradable paraphernalia, on the other hand, misleads consumers by implying that it breaks down easily, and that that’s a good thing.

“Everyone wants biodegradable packaging,” says Ron Basak-Smith, the CEO and co-founder of Sana Packaging, whose approach to making cannabis more sustainable centers on addressing the single-use-plastics problem that’s only growing as the industry does. “There’s no certification for that,” he says. “It just means that something breaks down into something at some point in time,” which may likely mean sitting in a landfill releasing carbon and methane. 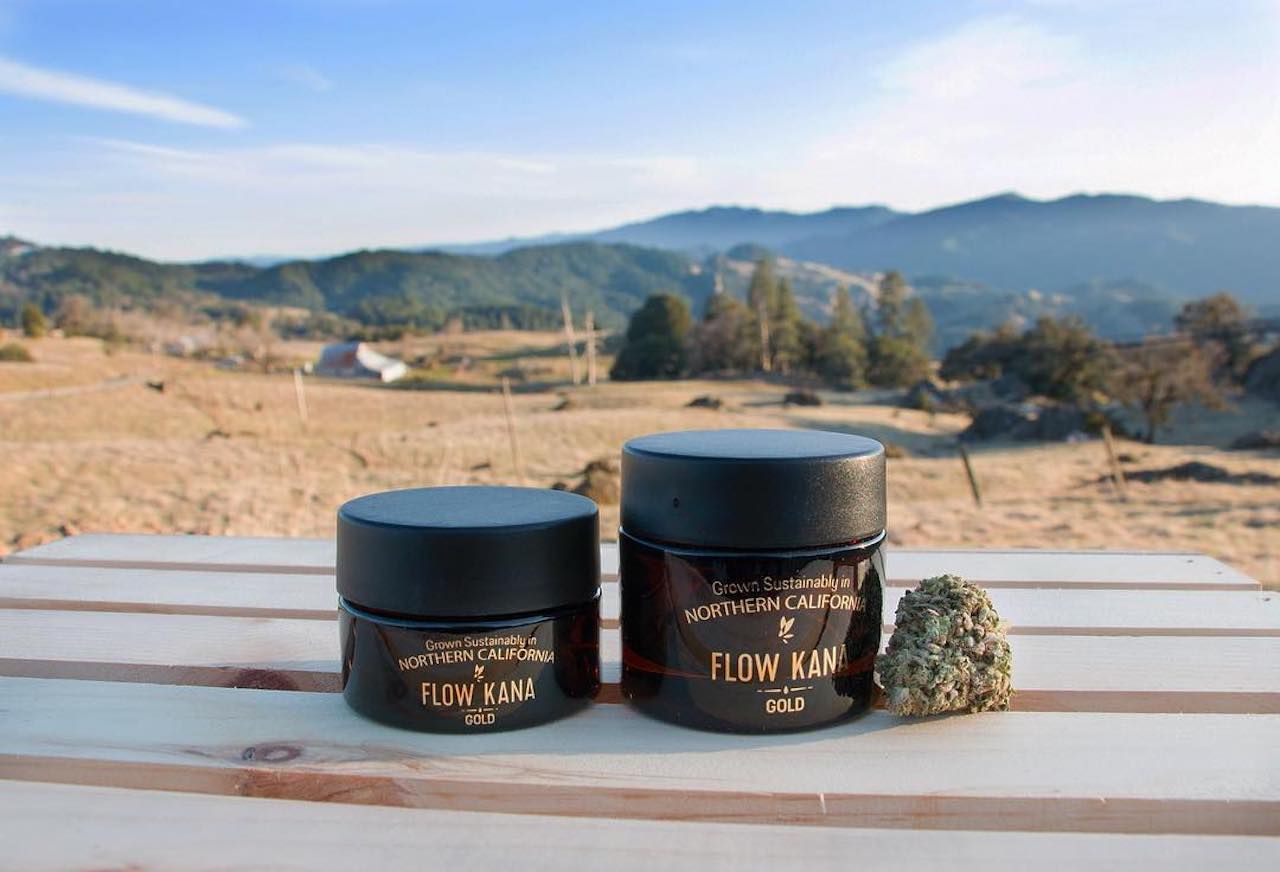 Flow Kana, a cannabis brand that partners with independent growers in Northern California’s Emerald Triangle, where the majority of the country’s cannabis is produced, believes that, with some support, craft cannabis farms can succeed, sustainably, at scale.

The company, which has raised close to $175 million in investments and is projected to be worth billions, follows a model similar to that of Uber and Airbnb, which have become giants in transportation and accommodation without owning any vehicles or hotel rooms.

Only one factor is true across the board: Flow Kana exclusively enables sun-grown cannabis.

“From our perspective, indoor [cannabis] is just a relic of prohibition,” said CEO and co-founder Michael Steinmetz during a Flow Talks presentation this year, adding that the silver lining to California’s bygone cannabis prohibition is that it resulted in tens of thousands of off-grid operations that were forced to adapt to cultivation without access to traditional water or power sources.

Though many illegal operations historically resorted to ecologically damaging practices, such as growing cannabis on public land and pillaging watersheds, others developed sustainable processes, such as employing solar power and rain catchments. Most also grew other crops, establishing diversified, ecologically beneficial farms.

Though Steinmetz concedes that mom-and-pop marijuana cannot compete with Big Cannabis on its own, he believes that this “model where you’re empowering thousands of small farmers that tend to the land, that love the plant, that do it with intention … can actually bring craft and scale to the same equation.” And, so far, it’s working.

Sustainability in the cannabis space does not start and end with cultivation, however. By the time flower and other cannabis products go to market, they introduce the issue of plastic use. Enter companies like Sana Packaging.

Basak-Smith was involved in the liquor industry when recreational cannabis started to take off in Colorado. Anticipating an onslaught of plastic packaging, he questioned whether cannabis would, or rather should, become the next industry built on the back of single-use plastics.

Together with James Eicher, Basak-Smith started Sana Packaging in 2016 to combat the planet-threatening problem. Their first step: Seek out sustainable and renewable materials. 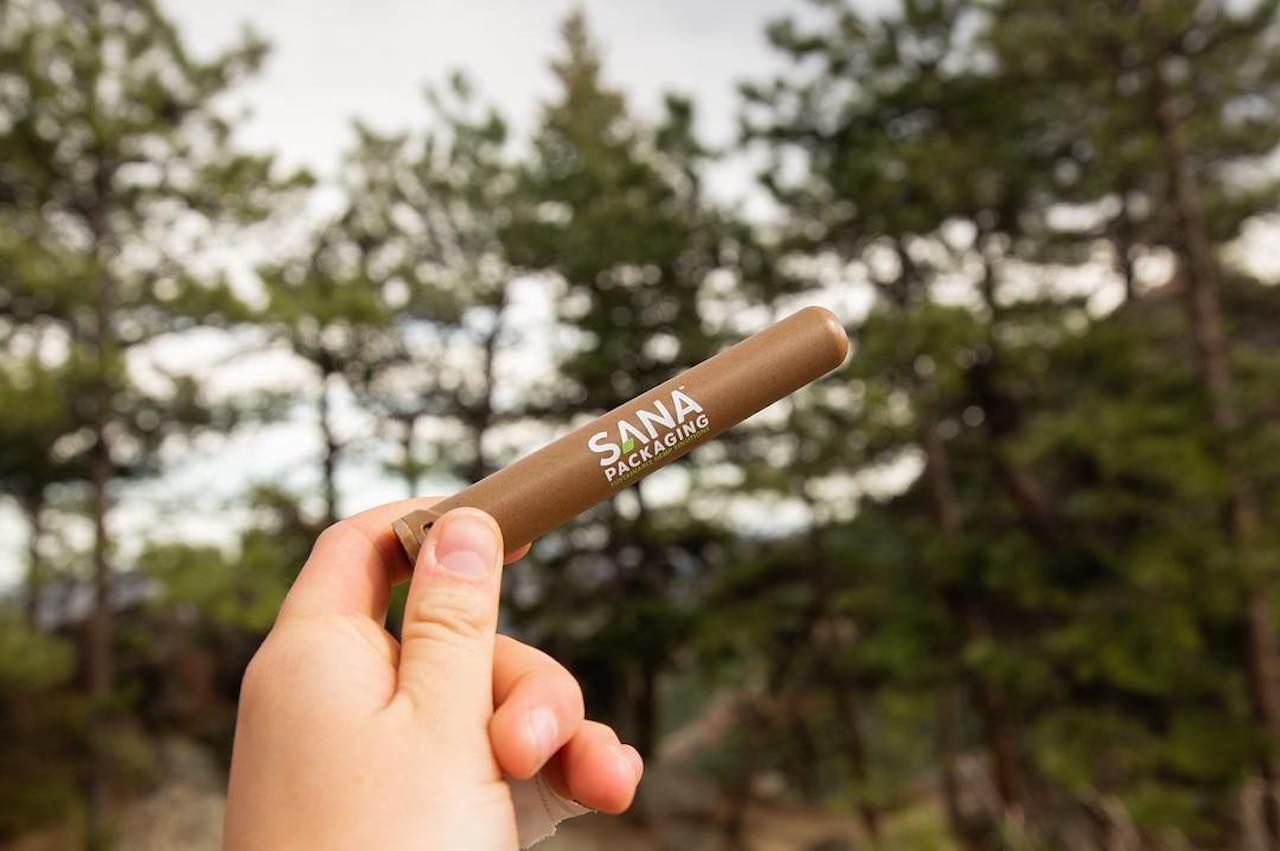 Many of the company’s products are made from 100 percent plant-based hemp plastic, a biocomposite that compounds hemp, a relatively eco-friendly feedstock, with polylactic acid, or PLA, the corn-based polymer from which all bioplastics are made. The company also partners with Oceanworks to create products made from 100 percent reclaimed ocean plastics.

Nonetheless, Sana Packaging considers itself “material agnostic.” Investing heavily in specific materials when both the regulations and science surrounding sustainable cannabis packaging are rapidly changing only contributes to the problem of promoting sub-sustainable materials.

“Think of plant-based plastics similar to the way you think of the early computer,” says Basak-Smith, who acknowledges that PLA, whose supply is largely controlled by multinational corporations that use genetically modified crops, is not free from scrutiny. “They’re really expensive, and oftentimes, there’s an easier substitute to use. But as the technology curve improves, you start to see the price drop, you start to see efficiency come in, and the materials become better. That’s where we stand with plant-based materials right now.”

Because of its reticence to promote a single solution, Sana Packaging recognizes the importance of building a brand on values with which consumers can identify. This poses challenges of its own: A product’s packaging is traditionally not meant to interfere with the product itself. Moreover, flashy packages, made with bright ink and mixed materials, are rarely sustainable.

Sana Packaging’s ocean tubes, for example, are currently only available in white, as white and clear plastics have the most recycling potential. As such, the company is banking on name recognition to catch a shopper’s eye. This necessitates building a brand based on substance, not style, that consumers want to support because they support what the company stands for.

Yet convincing cannabis companies and dispensaries to use Sana Packaging, and shoppers to buy products thusly packaged, is still only half of the Sana Packaging mission.

“We’re really trying to get to the core of the issues,” says Basak-Smith, who identifies failings within the country’s current waste-management systems as the primary inhibitor of truly sustainable packaging. Though he acknowledges the consumer appeal of a product made with reclaimed ocean plastic, for example, “at the end of the day, we didn’t start this company to make single-use plastic widgets.”

The next step is addressing the end-of-life cycle of cannabis packaging. Though state and federal regulations have created hurdles around recycling within closed systems, Sana Packaging is committed to carving out opportunities for consumers to put their used cannabis packaging back into circulation and, eventually, nature.

One option the company is exploring is establishing take-back programs that allow consumers to return their used packaging to local collection centers “because once it enters into the larger waste and recovery system … it’s not gonna get remanufactured,” says Basak-Smith.

He calls this top-down approach to proper manufacturing and disposal “producer responsibility.” It’s an environmental obligation that falls on companies, not consumers, despite the emphasis corporations and lobbies have placed on individuals to be more environmentally friendly over the past several decades. What good is it for the average American to recycle if those recycled goods are not then repurchased, he wonders, noting that allowing consumers to believe that they’re contributing to a sustainable system that is, in fact, deeply broken does more harm than anything.

What consumers can do is put their wallets where their intentions are. Supporting brands like Flow Kana and Sana Packaging sends a message to industry leaders and regulators alike that sustainability matters to cannabis users, even if it means paying a little extra for products.

As more states adopt legal cannabis, and the country stares down the barrel of a future in which federal legalization is increasingly likely, “everyone’s playing the game of who’s going to become the Pepsi Cola of cannabis,” says Basak-Smith. Let’s just hope sustainability in the cannabis space winds up miles ahead of the standard set by soda companies.

SustainabilityWater, Energy, and Plastic Packaging: Inside the Environmental Impact of Cannabis
Tagged
Cannabis
What did you think of this story?
Meh
Good
Awesome

This Map Shows Every State Where You Can Legally Consume Cannabis

Everything You Need To Know Before Traveling With CBD and THC, at Home or Abroad