Trips to Germany often highlight the country’s beer (or in Bavaria, beer and wine), art, and Gothic history. And while trips to cities like Berlin, Munich, and Hamburg are where most travelers experience these cultural touchpoints, a trip farther north to the city of Bremen will give you an entirely new perspective. With the Überseestadt, one of Europe’s largest urban development projects, in the works, Bremen is only becoming more attractive to visitors. Here’s how to best see the city when you go.

Things to do in Bremen, Germany 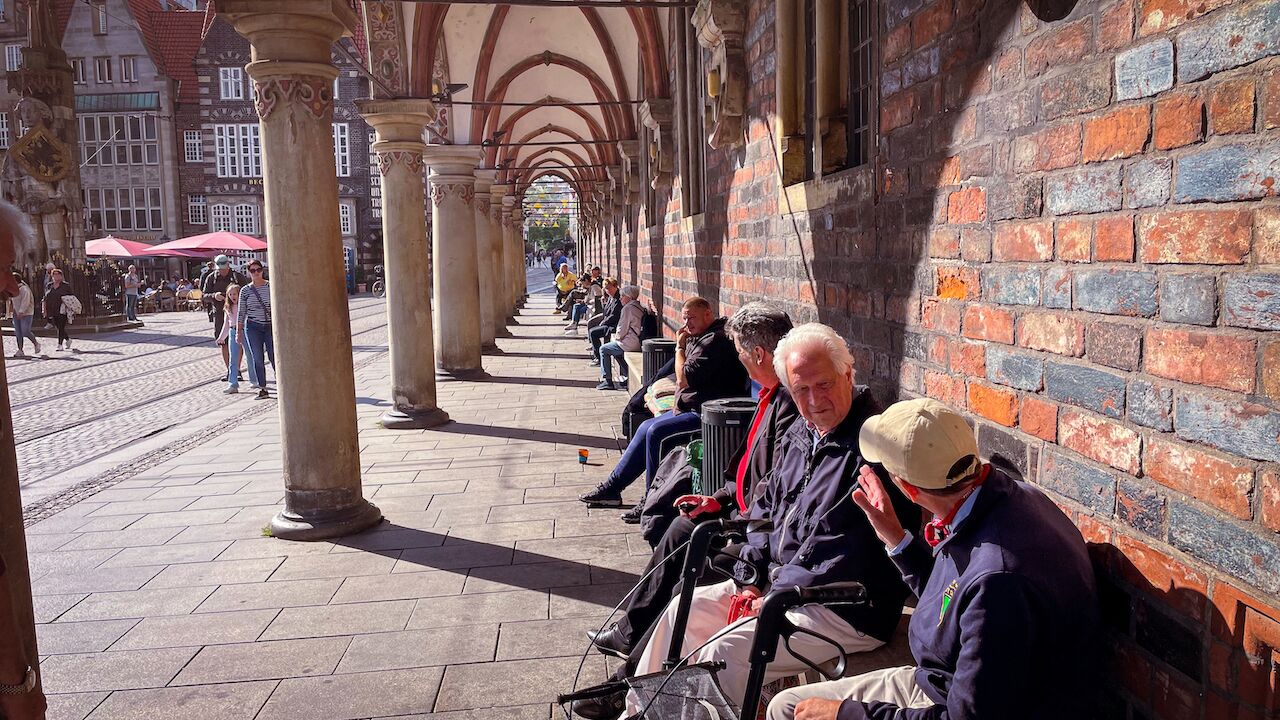 Klimahouse Bremerhaven: This museum tells the story of climate change through the lens of a man who documented his journey along the 8th-degree meridian. Visitors experience the various climates and cultures along the way in various engaging exhibits. The museum’s tactile and innovative storytelling can keep the whole family entertained. 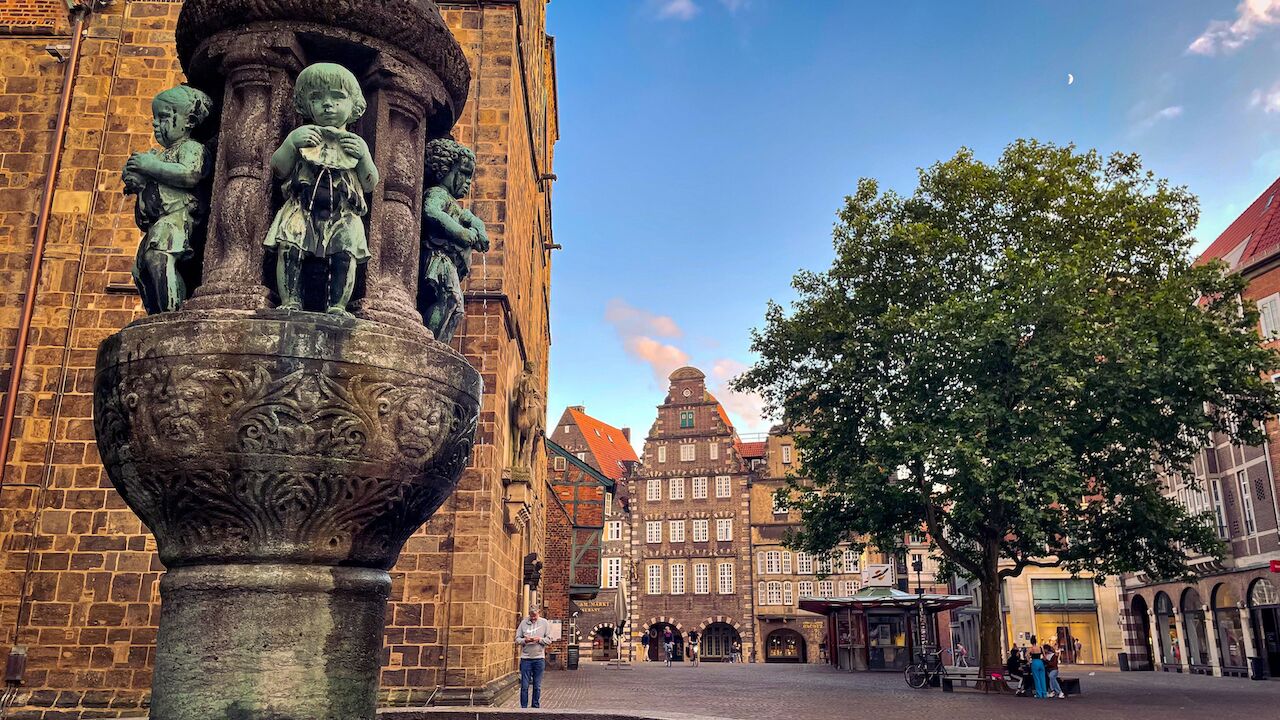 Bremen’s historic core: Bremen has a legendary 1200-year history, and it was the epicenter of the medieval merchant guild known as the Hanseatic League. This made it an economic powerhouse in the Middle Ages, and today the historic core has multiple UNESCO World Heritage Sites. Walking around the Gothic Marktplatz or stepping inside St Peter’s Cathedral is like a time machine. The cobbled streets, shops, and stunning architecture make Bremen a delight to walk through. Don’t miss the Schnoor neighborhood. This historic residential neighborhood’s colorful buildings and narrow lanes make for a great evening stroll.

Cycle around Worpswede via Moorexpress: The Moorexpress takes people on a 50-minute ride to Worpsweded on old-timey heritage cars. The service runs from May to October, with tickets available at the Bremen train station. Bike rentals are readily available in Bremen, and the conductor will take and store bicycles so travelers are free to enjoy the ride. Once in Worpswede, cyclists can enjoy a variety of cycling trails throughout the area.

Devil’s bog: The peaceful devil’s bog (teufelsmoor in German) is known though a centuries-old local legend as a place that the devil created to suit his desires. Today, the rivers, marshland, and dramatic clouds of this flat landscape are the picturesque scenes that continue to attract artists, and visitors can go to Hammerstrand and take a peat barge trip down the river to enjoy the serene landscape.

Where to eat and drink in Bremen 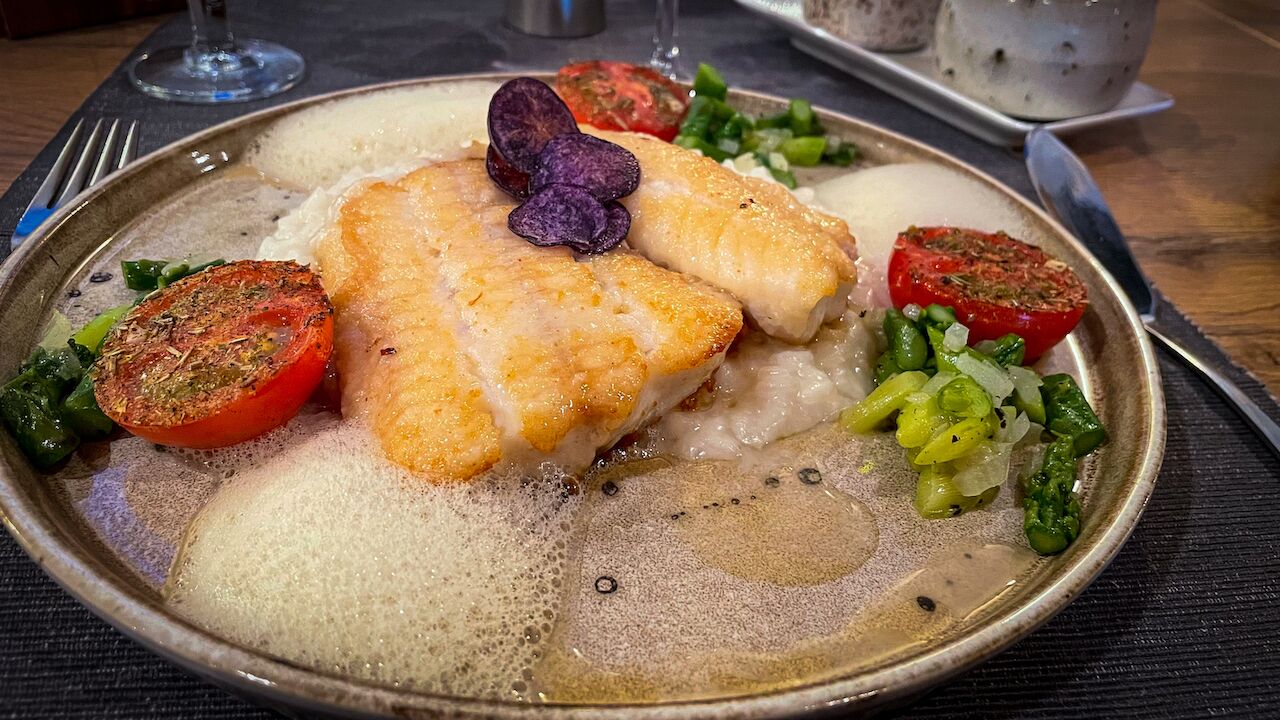 Restaurant Dock IV Bremerhaven: Located in the former fish market and harbor Schaufenster Fischereihafen, this restaurant is the place to go for perfectly prepared fish.

Katzencafé Bremen: A colorful restaurant in the picturesque Schnoor neighborhood that has outdoor seating in a central courtyard on warm days. The menu is pan-European with a French twist, and there are plenty of meat options and fresh seafood from the North Sea.

Hammehütte Neu Helgoland: This riverside restaurant has views of the beautiful Taufesmoor landscape near Worpswede. Local dishes make it a must-visit in the area, and it’s a great place to try traditional matjes (herring). 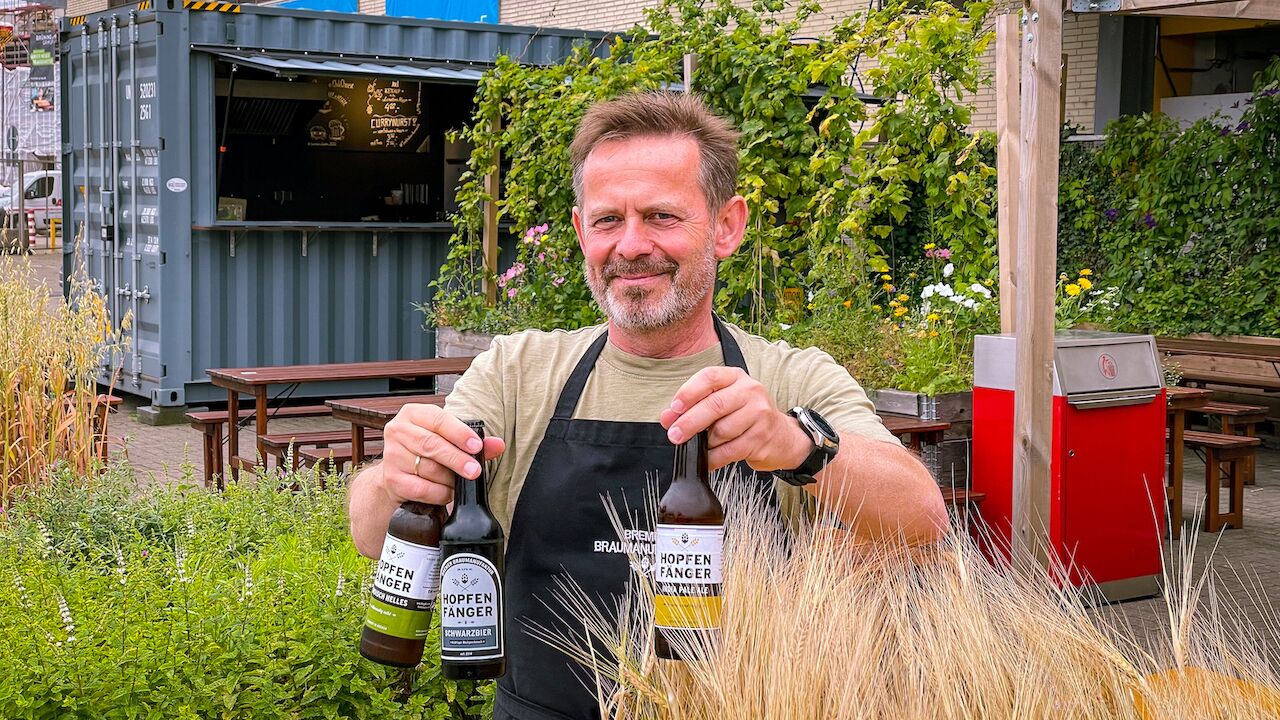 Bremer Braumanufaktur: Bremen has a 1,000 year brewing history. This microbrewery started making beer at other breweries in 2014 and opened its own brewery in 2019. It’s part of the upcoming Überseestadt, and is the place to go for beer lovers thanks to good beer, good food, and beer seminars for anyone who wants to dig a little deeper.

Bremer Ratskeller: The 600-plus-year-old Bremen Ratskeller is the oldest restaurant in town. The incomparable dark wood ambiance dates back to 1404. It’s an ideal location for a group, family, or special dinner out.

Bluer Fasan Bar: This bar is hands down the hippest place in the center of Bremen. The elevated cocktail menu features both classic and creative offerings, and the setting is casual yet sophisticated.

Where to stay in and around Bremen, Germany 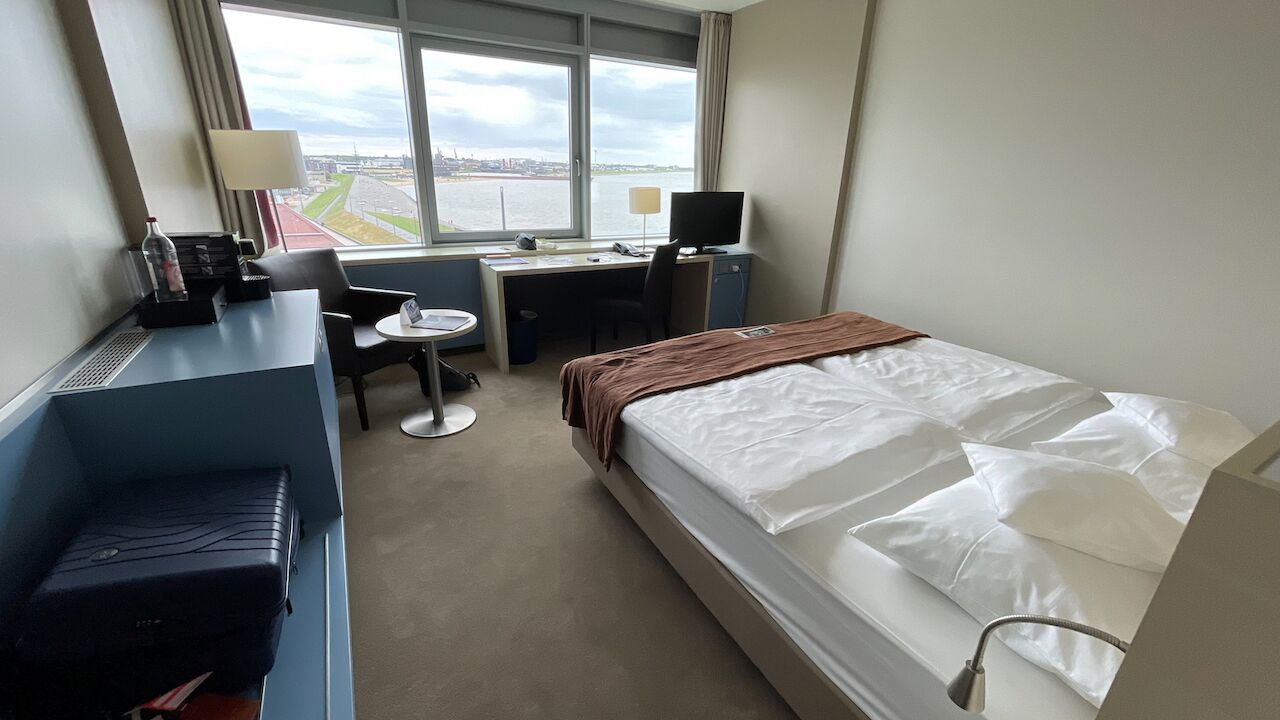 Atlantic Hotel Sail City: This sustainable hotel is located on the Bremerhaven harbor next to the Klimahouse Museum. Most rooms have views of the harbor, and an observation deck at the top of the hotel offers stunning 360-degree views of the area. 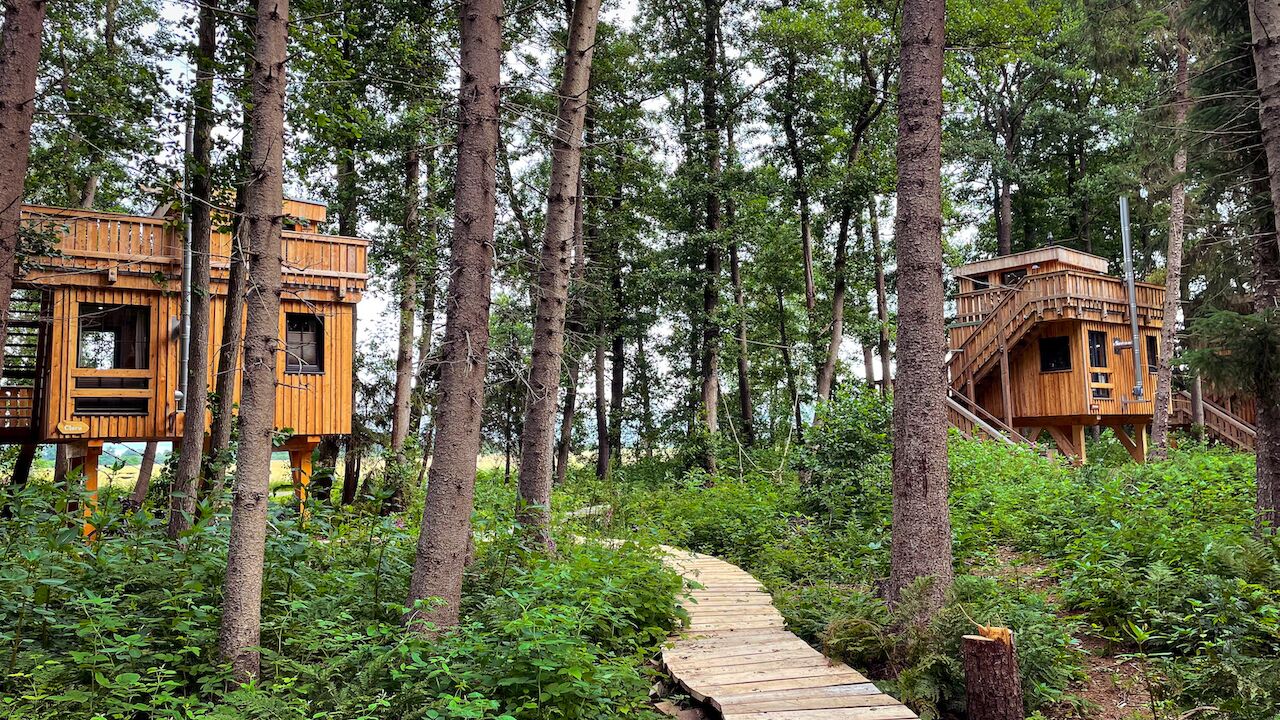 Land of Green: Land of Green is a glamping gem with tiny houses, tree houses, RV Camping, a safari lodge, and a campground in the protected area of the Teufelsmoor near Worpswede. Amenities like canoe rentals, sauna, and hot tub are available.

Dorint City: The location of the Dorint City Hotel could not be more central in Bremen. The elegant rooms are comfortable and spacious, and the hotel can arrange bicycle rentals (and has bicycle parking readily available). The gym and sauna on the bottom floor are a must for those looking to work out or relax.

How to get around Bremen, Germany 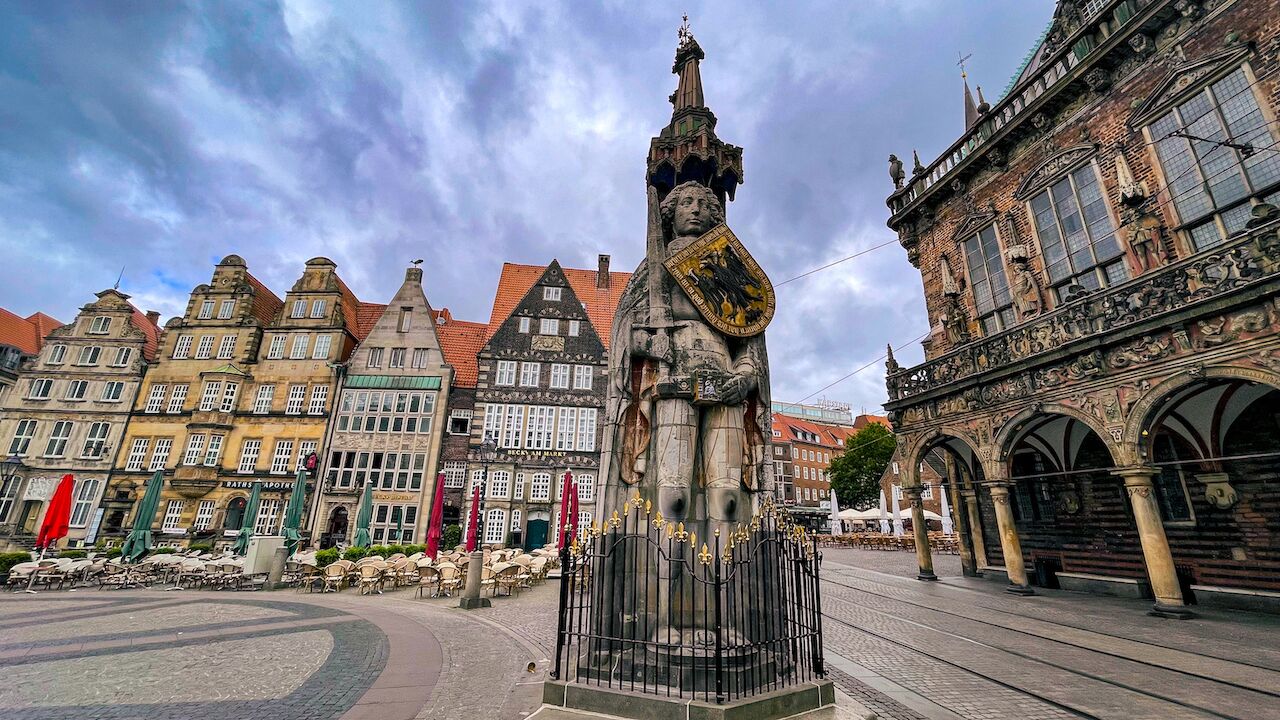 Bremen has a walkable city center, and the historic core and Schnoor neighborhood have plenty of pedestrian-only streets. If arriving by train and staying within the historic core, walking from the station to a central hotel only takes a few minutes. Bremen has a strong cycling culture, and hotels can easily arrange a bike rental (including for electric bikes).

To get into the city, the tram, covered on the 9 Euro rail ticket, connects the airport to the historic core and stops at all of the central city highlights. Bremen’s train station has connections to other parts of Germany. As the capital of the State of Bremen, there are direct high-speed and regional trains by the German National Railway (Deutsche Bahn) to major cities like Hannover, Cologne, Hamburg, and Frankfurt.

How to get to Bremen

Lufthansa Airlines has direct flights from the United States to Munich, and the Munich Airport makes for an easy 70-minute connection to Bremen. The State of Bavaria is the majority owner of the Munich Airport, and the Federal Republic is the minority owner, and it has faced less of the cancellation and staffing shortage chaos that has plagued other airports as people return to travel.

Bremen is also reachable by high-speed or regional trains from any part of Germany on the Deutchebahn National Railway.

Getting into the Bremen city center is straightforward by taxi or city tram. The city tram stops directly in front of the Airport and is included in the 9 Euro Deuschebahn ticket.

WineYou Know Bavaria for Beer, but You Should Be Going for the Wine, Too
Tagged
Travel
What did you think of this story?
Meh
Good
Awesome