Chocolate is a unicorn in the food world: It’s one of the very few ingredients that nearly everyone can agree is perfect in every way. It can be creamy, rich, or decadent — and it’s usually all three at once. Its flavor is surprisingly complex, but balanced, hovering somewhere between sweet and bitter. And chocolate is versatile, too: It can satisfy and titillate in the form of a hot drink or a bar of fudge. But in the form of cake, it has no equal.

Whether it’s constructed from light sponge cake filled with chocolate buttercream or layers of dulce de leche in between coffee-soaked chocolate cookies, chocolate cake takes many forms and has spread across the globe, from Hungary to Japan. Regardless of the style, chocolate cake offers a feeling of familiarity to travelers from everywhere and anywhere in the world.

Here are seven chocolate cakes to try on your travels. 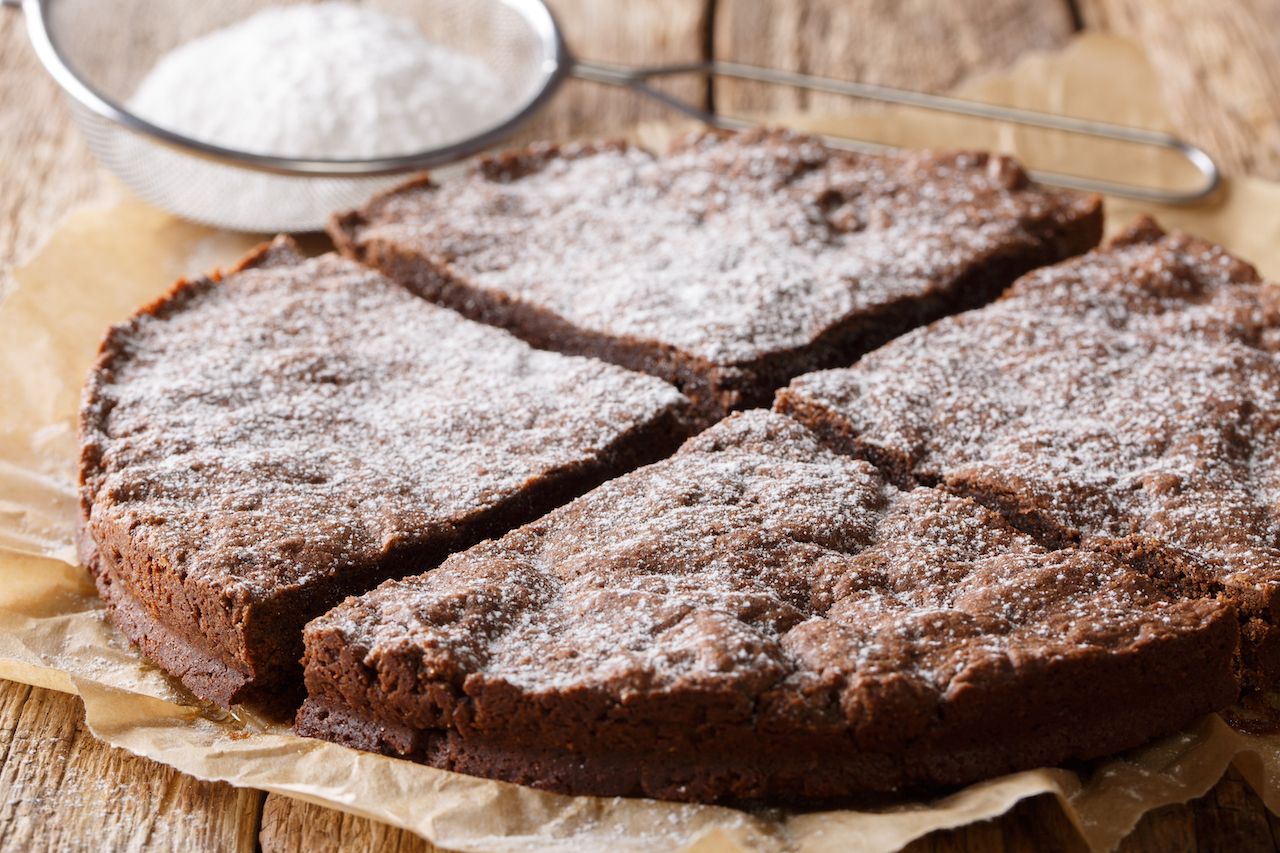 This dense chocolate cake is one of the most popular desserts in Sweden. Similar to a brownie, kladdkaka (which translates to “sticky cake”) is crispy on the outside with a gooey, fudgy center, and powdered sugar is sprinkled on top. It’s often purposefully undercooked so that the center remains soft. Kladdkaka is often served at fika, the Swedish tradition of enjoying cake and tea with friends or colleagues. 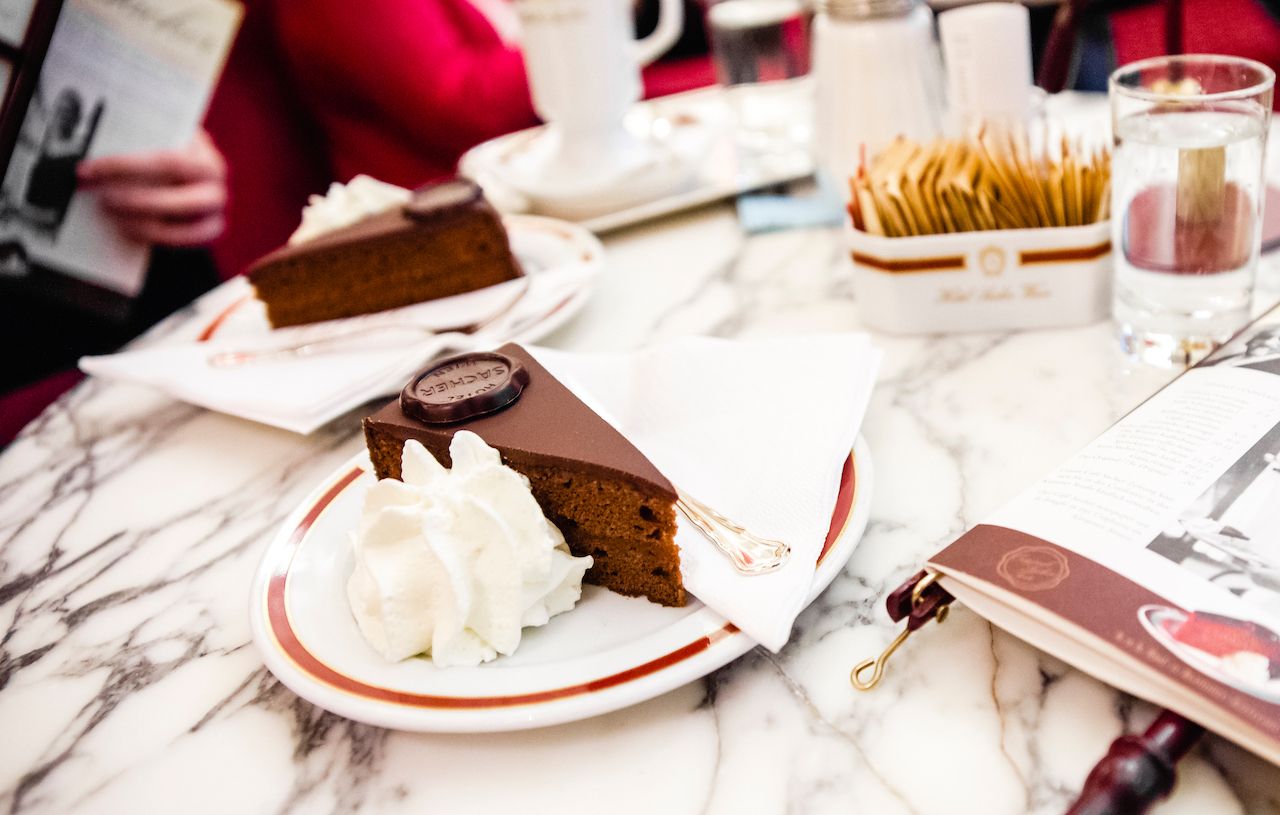 Sachertorte is legendary in Vienna, where it’s sold in almost every cafe. The cake is the creation of a pastry chef named Franz Sacher. According to legend, Sacher created the cake in 1832 at the request of Prince Klemens von Metternich. With the head chef out sick, the 16-year-old layered apricot jam between slices of chocolate sponge cake, then covered the cake in rich dark chocolate. His son, Eduard Sacher, eventually founded the Hotel Sacher, which still boasts the “Original Sacher Torte.” One of Vienna’s oldest cafes, Demel Patisserie, bought the rights to reproduce the original recipe. That version includes a layer of apricot jam directly underneath the cake’s chocolate glaze topping. 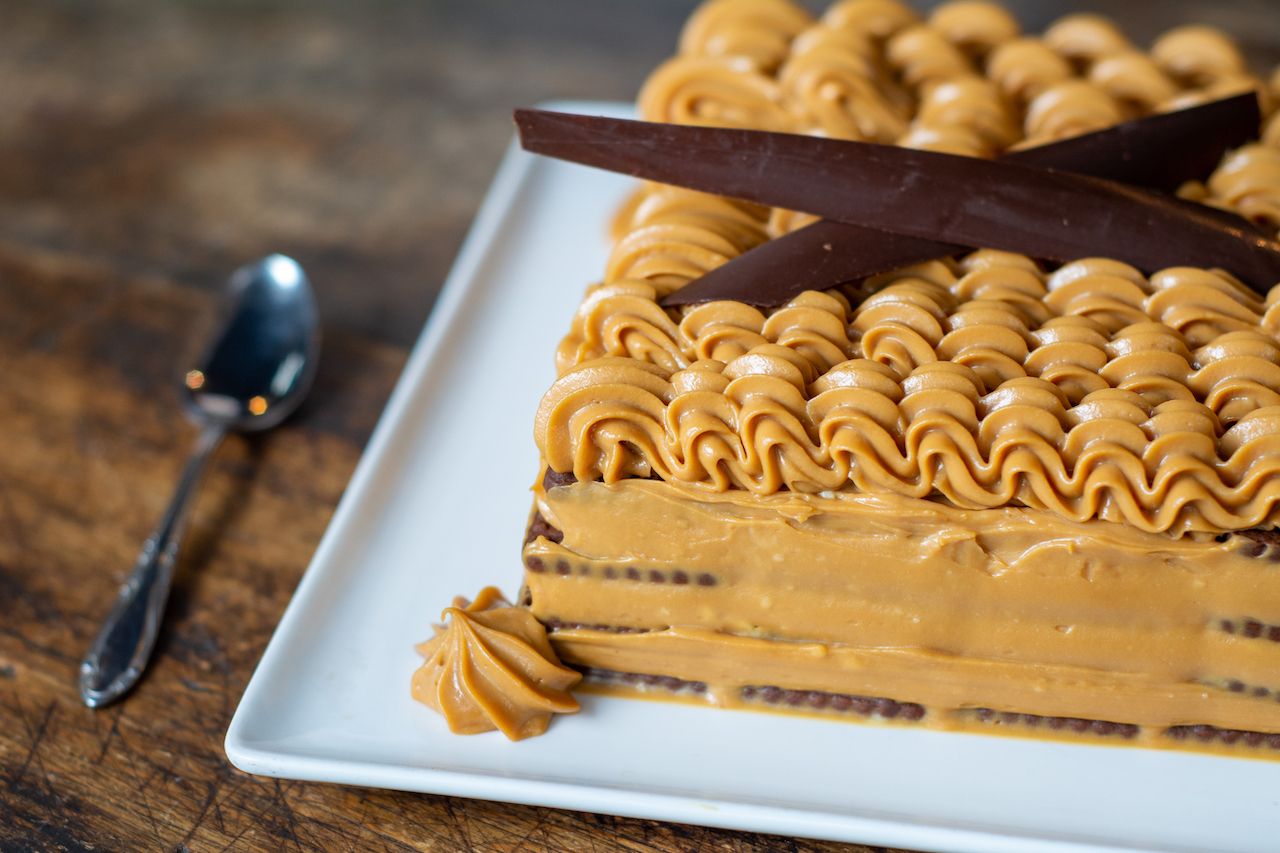 A staple at kids’ birthday parties in Argentina. The decadent creation is made by layering chocolate cookies soaked in coffee or chocolate milk between still more layers of dulce de leche and cream cheese, or queso crema. The resulting confection is so soft and gooey it can be eaten with a spoon. The cake is a relatively new creation: In 1982, a woman named Marité Mabragaña, who worked for an advertising agency, came up with the recipe as a way to promote two of her clients at the same time: cream cheese and chocolate cookies. 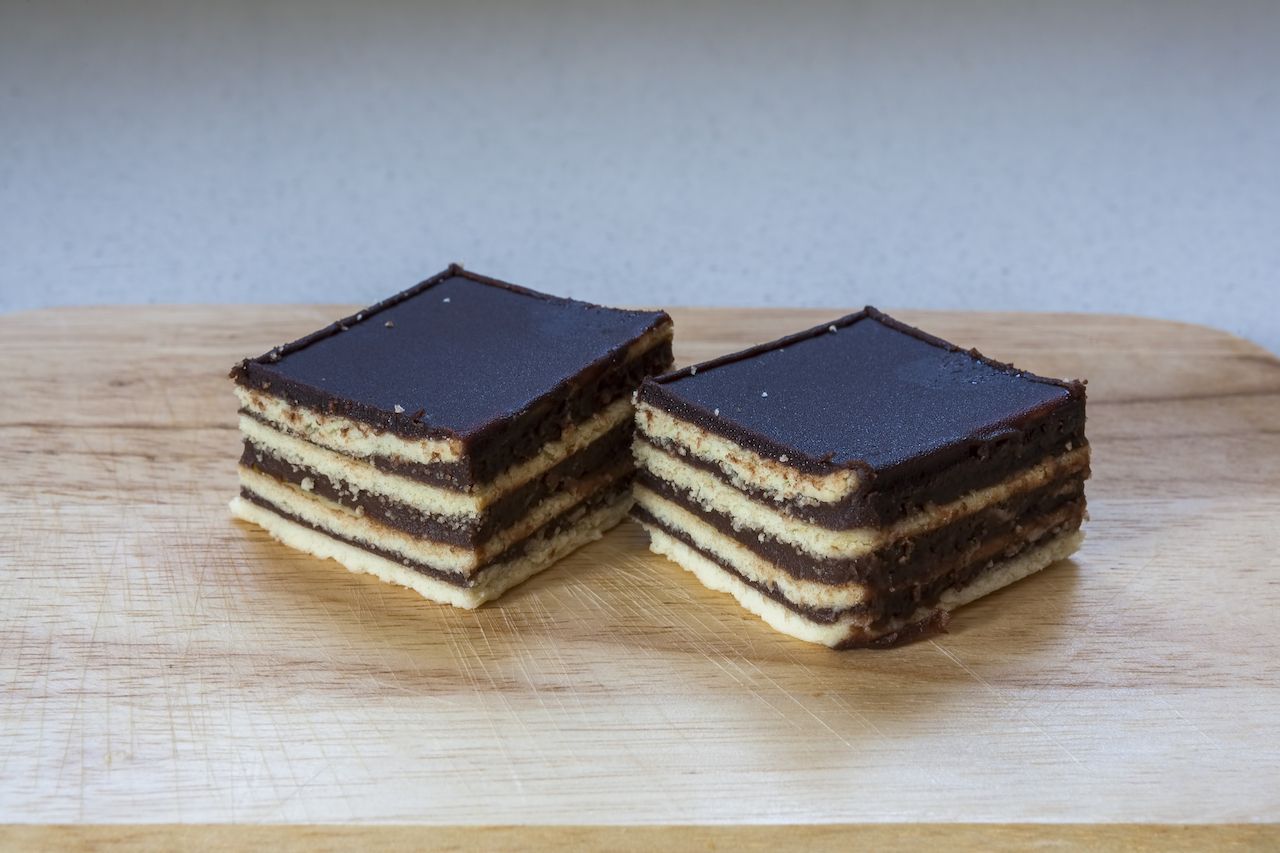 This Croatian layer cake’s name translates to “Hungarian girl,” and it’s one of the most recognizable desserts in the country. Moist slices of cake are layered with rich chocolate buttercream filling and topped with a chocolate glaze. Instead of being served as a whole cake, it’s usually cut into small, bite-sized rectangles. Madjarica is a staple at special occasions and holidays, especially Christmas. 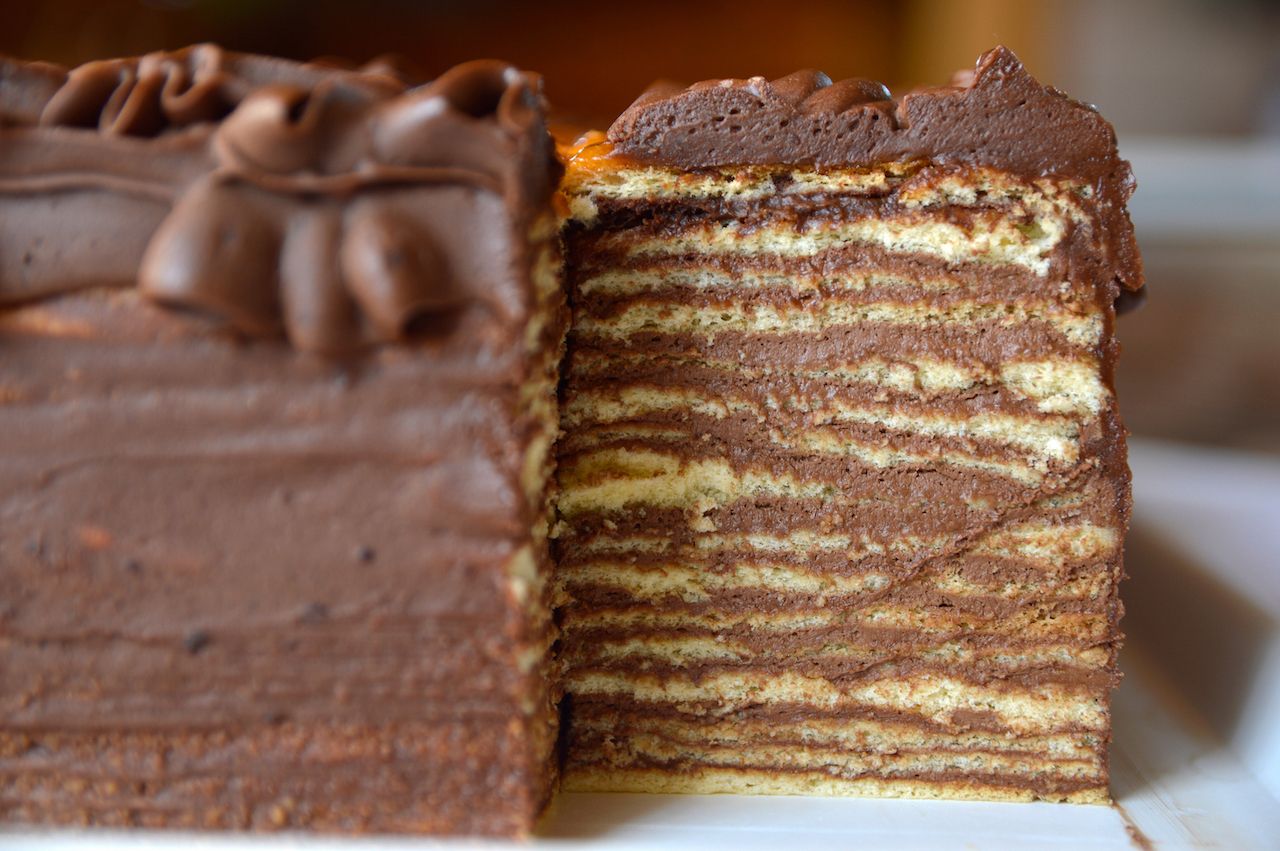 This Hungarian layer is similar to madjarica. Many thin slices of cake are layered with chocolate buttercream, and there’s a layer of crisp caramel glaze on top. The layers of cake can’t be cut from the same cake; each one must be baked individually. It’s named for its inventor, József C. Dobos, a pastry chef from Budapest who came up with the recipe in 1885. The cake quickly became a favorite of Emperor Franz Josef I of Austro-Hungary, causing its popularity to explode. Dobos refused to reveal the recipe, even taking it on tour with him around Europe. Eventually, Dobos relented and donated his recipe to the Budapest Confectioners’ and Gingerbread Makers’ Chamber of Industry when he retired in the early 1900s. 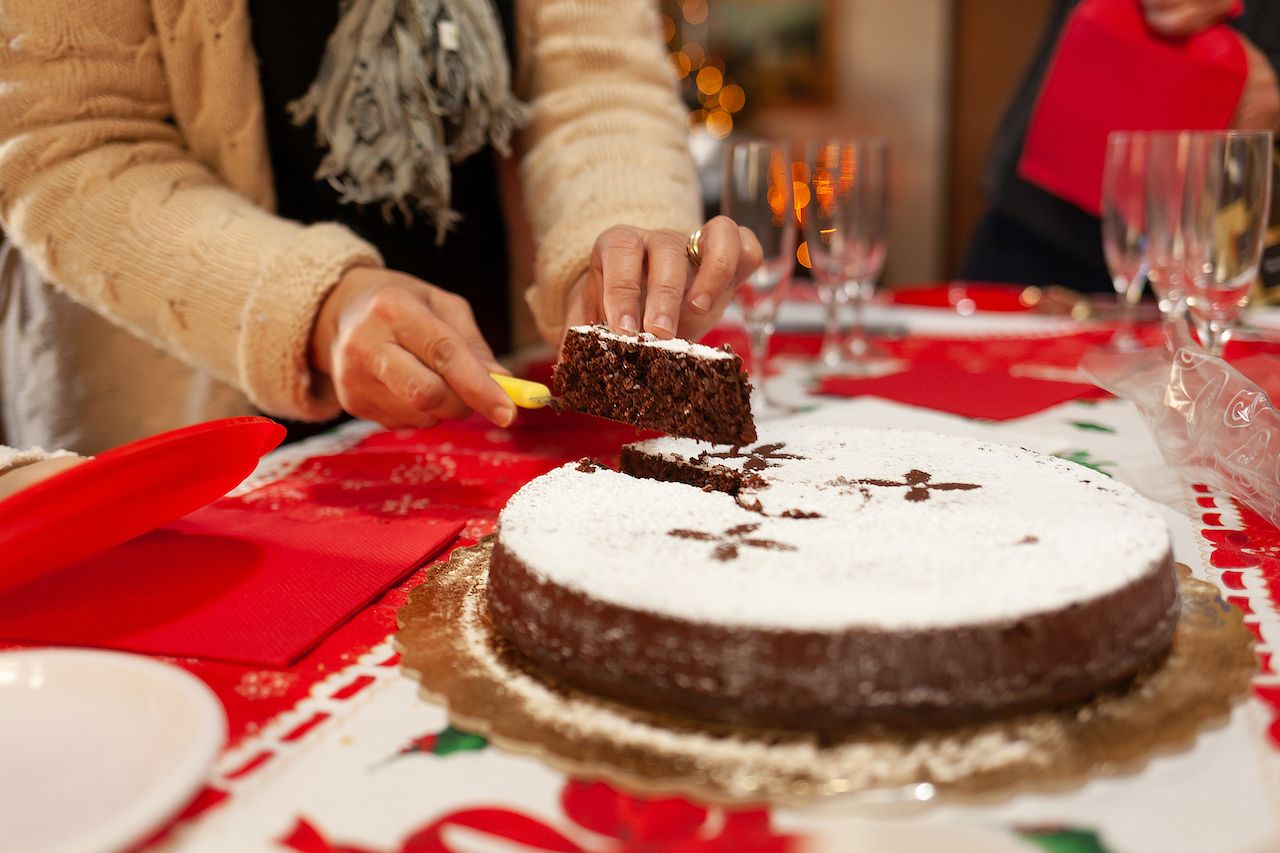 Torta caprese originated on the Italian island of Capri, but it’s also popular in Naples. Similar to kladdkaka, the outer layer of cake is a crisp, chocolatey shell while the inside is soft and gooey. The biggest difference is that the cake is flourless and flavored with almonds or walnuts. The exact origins of torta caprese is unknown, but according to legend, the cake was probably created by accident when a chef in a rush left out the flour in his chocolate cake recipe. 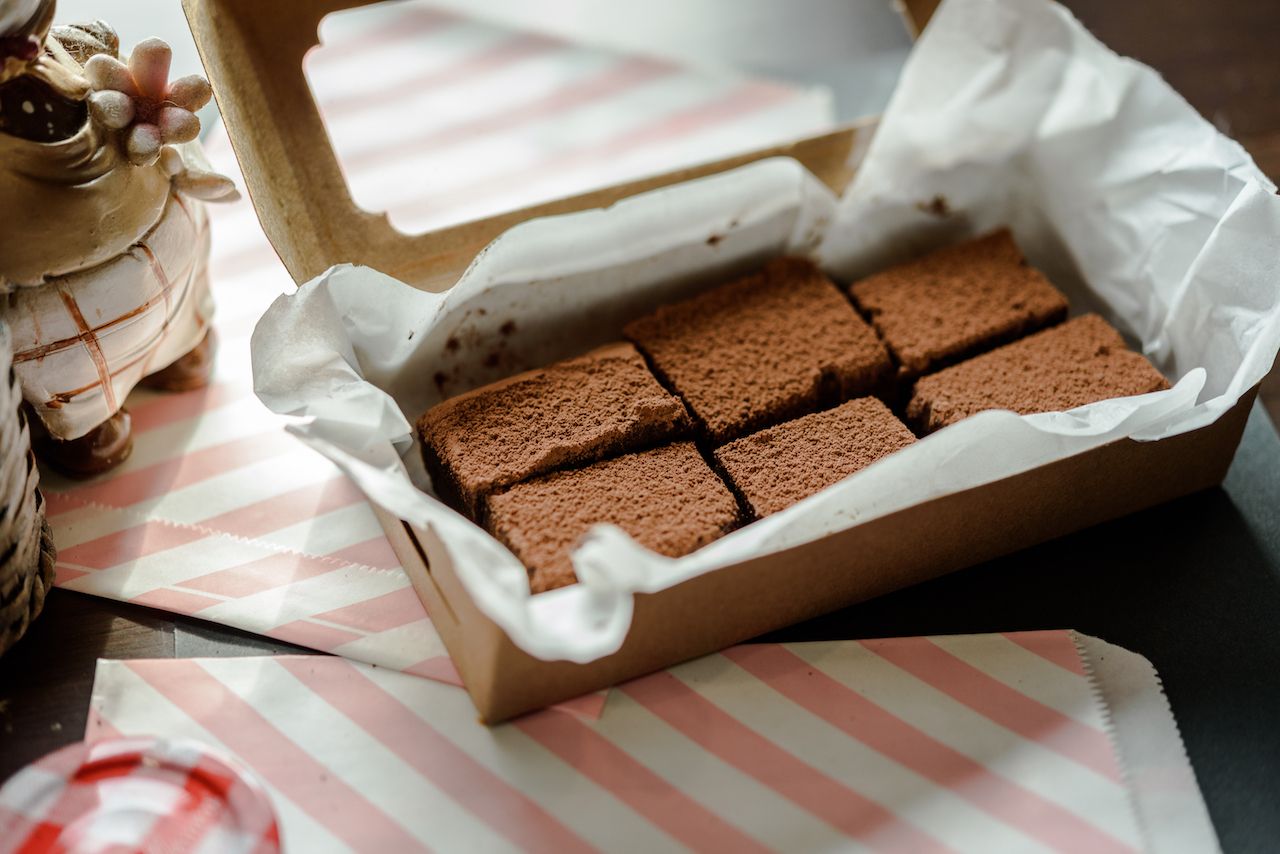 It might be a stretch to call nama chocolate a cake when the texture is closer to fudge, but these rich squares of ganache are a luxurious treat in Japan. Nama means raw or fresh in Japanese, a reference to the fresh cream used in the ganache. Cut into cubes and dusted with cacao powder, nama chocolate is wrapped in delicate boxes and tied up with ribbon, making it a popular gift. Nama chocolate didn’t appear in Japan until the eighties, but it was likely inspired by a Swiss confection called pave de Geneva.

Super fluffy, light, and airy chiffon cakes inspired by similar European cakes are also very popular throughout Japan, in many flavors including chocolate. 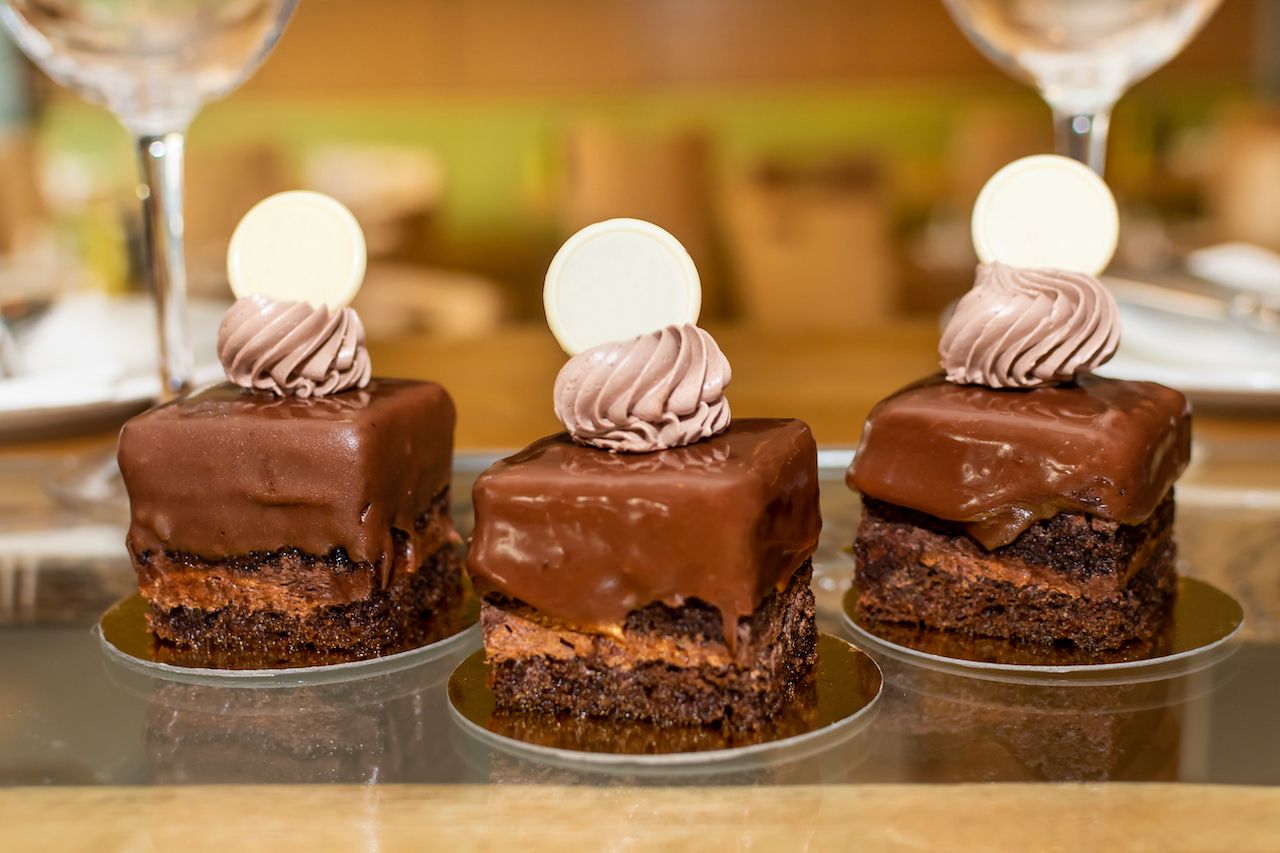 These Romanian chocolate cakes fit in the palm of your hand. The sponge cake, which is sometimes first soaked in rum, is filled with caramel and chocolate or almond buttercream. The top is finished with a silky chocolate fondant glaze. You’re likely to see amandine displayed in the windows of most sweetshops in Romania.

Food + Drink9 Sweet, Savory, and Downright Delicious Pies From Around the World
Tagged
Dessert
What did you think of this story?
Meh
Good
Awesome