It’s tough adjusting to the era of social distancing and self-isolation. Simple pleasures — such as grabbing a coffee with a friend — are faraway realities, and the idea of hopping on a train or plane is entirely improbable. Although it isn’t possible to physically embark on adventures right now, you can still mentally escape the confines of your home by listening to the right podcasts. Here’s a round-up of some of our favorite travel-oriented podcast episodes, so you can drift off from the current situation by just plugging in your headphones. 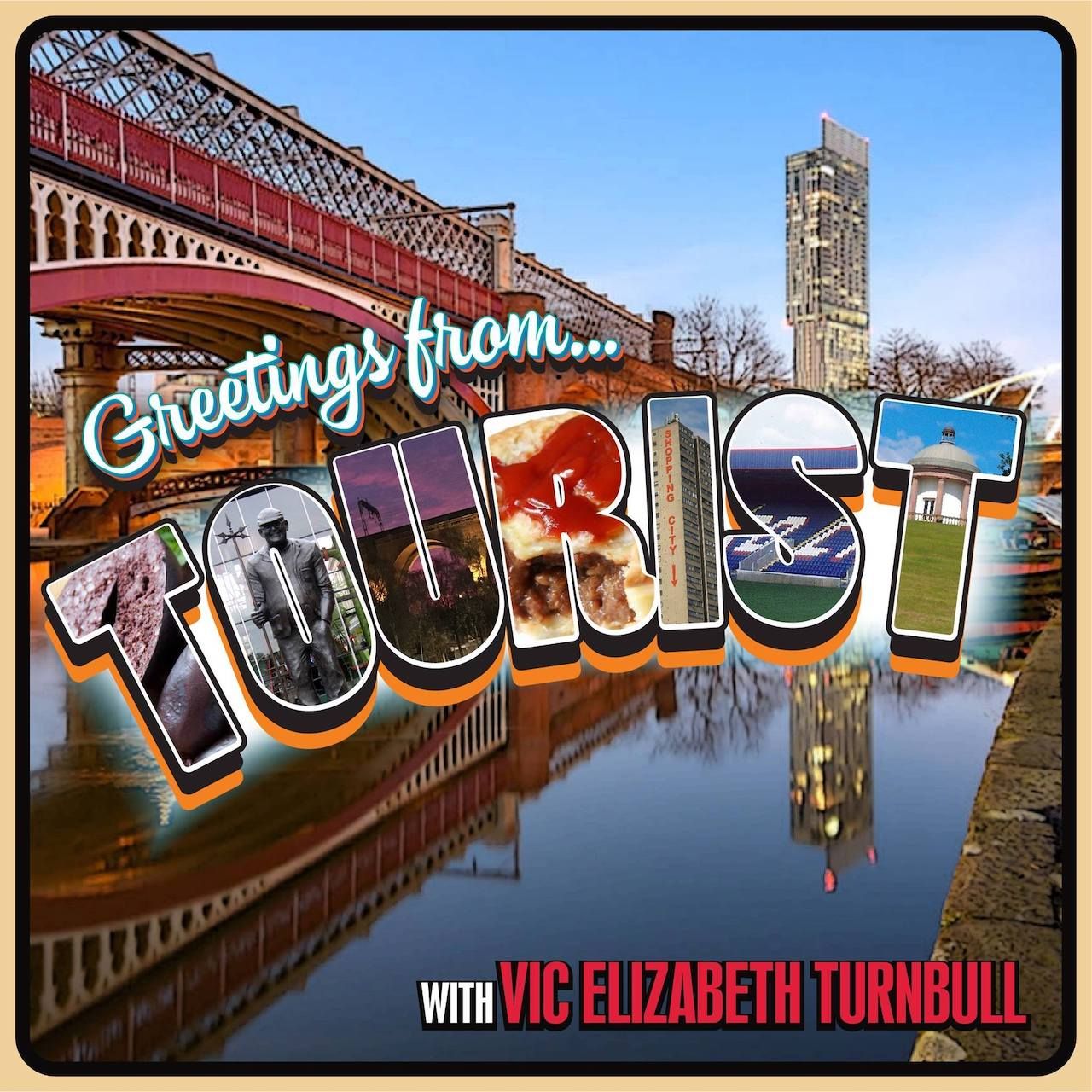 Tourist Podcast is a show wherein host Vic Elizabeth Turnball chats with comedians about various tourist attractions in the United Kingdom. In this episode, Jen Brister (British standup comic, writer, and podcaster) walks with Vic through Manchester. They first stop at a restaurant called Frankie’s Toastie Bar, which offers anything you can imagine between two slices of bread. Then they visit the LGBTQ+ district to see the Alan Turing Memorial, which pays homage to the gay British mathematician who cracked the German Enigma code during WWII. The conversation between Vic and Jen fluctuates between playful and serious — while listening, you feel like you’re joining two friends for a casual stroll in the city.

You can listen to the episode on Stitcher, Apple Podcasts, or SimpleCast.

This episode of Vox’s Reset podcast is a must-listen for anyone who travels using Airbnb. Allie Conti, a freelance reporter, uncovered a large Airbnb scam after attempting to rent an apartment in Chicago. Just before Allie was ready to check into her Chicago apartment, the host called her and told her the apartment was flooded. He offered another apartment for her stay, and she agreed, frazzled in a new city and trusting her host. Allie arrived at the new property and discovered that it was dirty, dingy, and run down. But by then, it was too late. The scam takes advantage of the fact that travelers cannot request a full refund after checking into a rental. Listen to the full episode to learn how to spot this scam, and what you can do to protect yourself while traveling.

You can listen to the episode on Apple Podcasts, Spotify, or Stitcher. 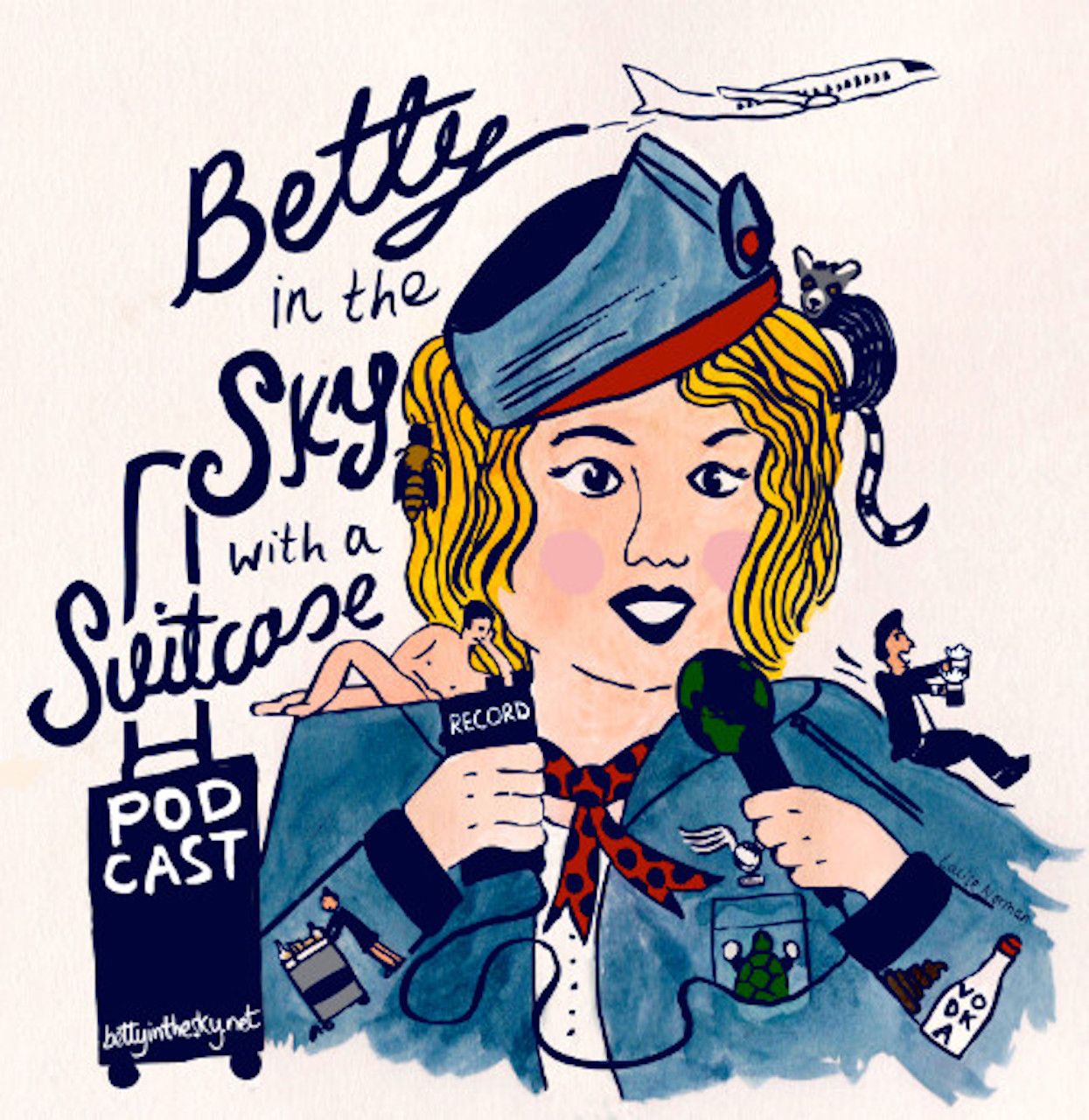 Photo: Betty in the Sky with a Suitcase

If you’ve ever wondered about the secret world of flight attendants, then this is the show for you. Betty in the Sky is a long-running podcast, and each episode contains funny stories told from the eyes of flight attendants. You can pretty much select any episode and be guaranteed a laugh, but this one is particularly hilarious. In “Eau du Sandwich,” flight attendants share stories about playing pranks on newbies, monks, and sumo wrestlers. Betty’s podcast is an especially great choice if you’re in the mood for something light. And trust us, after listening, you’ll never look at a flight attendant the same way again.

You can listen on Betty’s website, Apple Podcasts, or Stitcher.

The Jungle Prince is a special mini-series, composed of three 35-minute chapters, from the New York Times. This podcast follows reporter Ellen Barry as she discovers a fascinating story while working on an assignment in Delhi, India. A local myth in Old Delhi claims that a deposed prince, princess, and queen of the Shiite Muslim royal line lived in a hidden, crumbling palace on the outskirts of Old Delhi. After repeatedly hearing about this legend from locals, Ellen received a call from her office manager with instructions about how to reach the supposed royal family. This gripping tale about Ellen’s investigation will have you listening to all three chapters back-to-back.

You can listen on Stitcher, The NY Times website, Spotify, or Apple Podcasts.

5. She Explores — “Shining A Light On Caving: Katt Greaser” 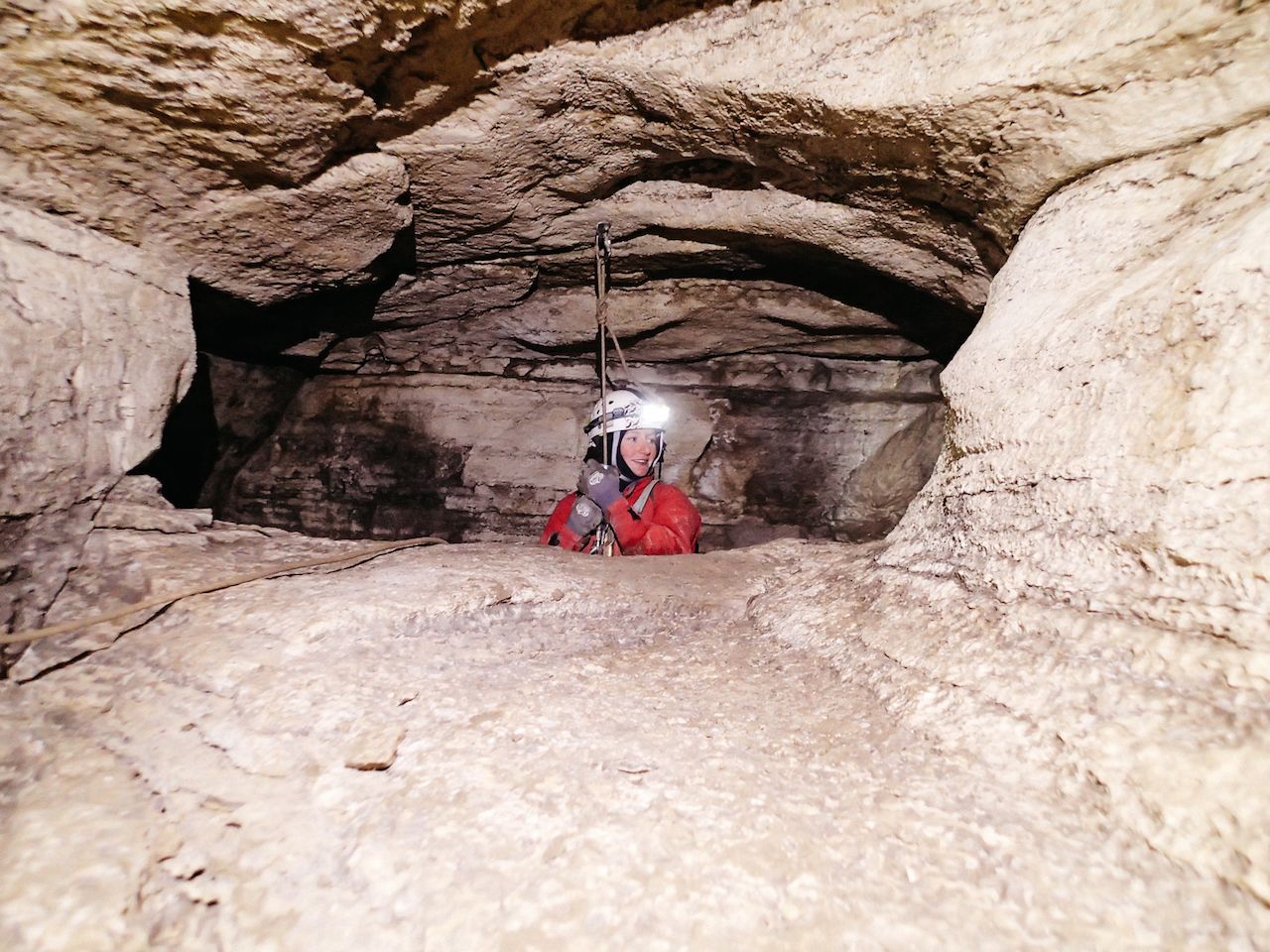 Photo: Brian Gindling via She Explores

She Explores is a podcast hosted by Gale Straub that chronicles stories of women who are passionate about outdoor adventure and travel. In this particular episode, caving enthusiast Katt Greaser discusses how she got into caving, as well as her recent caving trip in the Scapegoat region of Montana. Katt shares audio recordings from inside the Scapegoat caves, as well as insight about cave navigation techniques. Her obvious passion for the sport is contagious. This episode is a great listen for anyone who has ever considered caving, and it’ll certainly provide inspiration for your next trip once the era of social-distancing ends.

You can listen on the podcast site, Apple Podcasts, or Spotify.

The Trip is a podcast series by Roads & Kingdoms, the travel publication associated with the late Anthony Bourdain. Nathan Thornburgh is the host of The Trip, and in this episode he sits down with world-renowned conflict photographer Yuri Kozyrev. Yuri spent 25 years covering conflicts from Chechnya, Afghanistan, Iraq, Libya and beyond. This intimate interview covers the personal struggles of being a conflict photographer, and eventually, Yuri’s decision to quit. It’s a must-listen for any traveler interested in travel journalism.

You can listen on Spotify, Luminary, or the Roads & Kingdoms website. 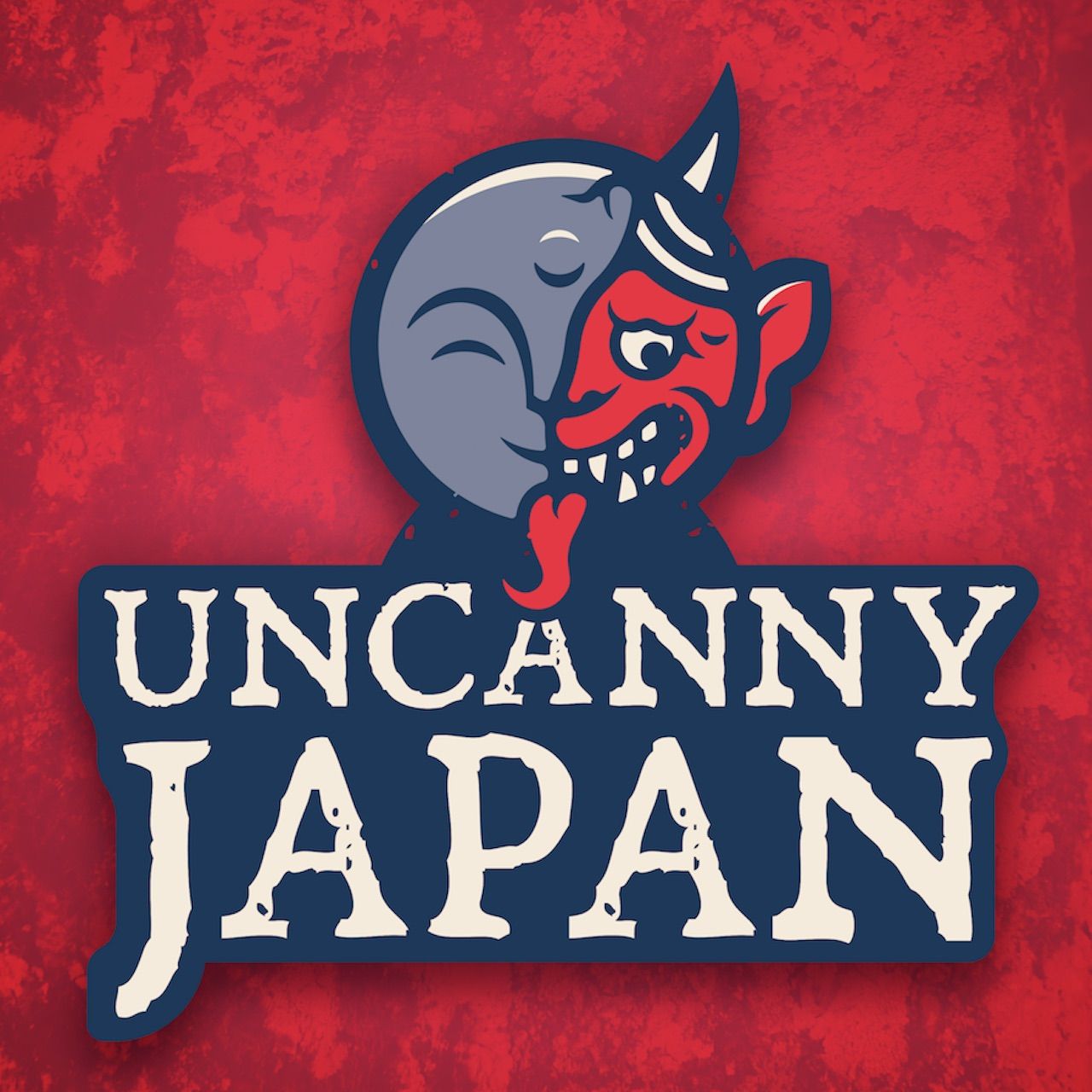 Uncanny Japan is a podcast hosted by fiction writer Theresa Matsuura. She was born in the USA but has lived in a small Japanese fishing village for the past 25 years, making her an expert on some unusual aspects of Japanese culture. In Episode 37, Matsuura discusses an eyebrow-raising app that contains animations of oni — Japanese demons — to help parents discipline their children. A parent can “call” a demon to frighten their child into obedience. The app contains a series of demonic animations and pre-recorded messages for different scenarios, such as convincing a child to brush their teeth. Matsuura isn’t certain whether she agrees or disagrees with the concept of the app, but she downloads it and gives listeners an interesting, hilarious tour of all it has to offer.

You can listen to the episode on Stitcher, Apple Podcasts, or Spotify.

This fascinating episode of Nat Geo’s Overheard podcast follows Kristen Romey, an underwater archaeologist, as she investigates the 2,300-year-old tomb of a Kushite king that is submerged in rising groundwater. This particular tomb — of pharaoh Nastasen — is located in Sudan in an outcropping of pyramids dedicated to a legion of ancient black pharaohs. Kristen must feel her way through dark water and narrow chambers beneath the pyramid in order to excavate irreplaceable artifacts from the royal tomb. In addition to detailing the excavation, this podcast dives into the little-known history of the Sudanese pharaohs. It’s a gripping, informative listen, well worth the 17-minute play time.

You can listen on Apple Podcasts, the National Geographic website, or Spotify. 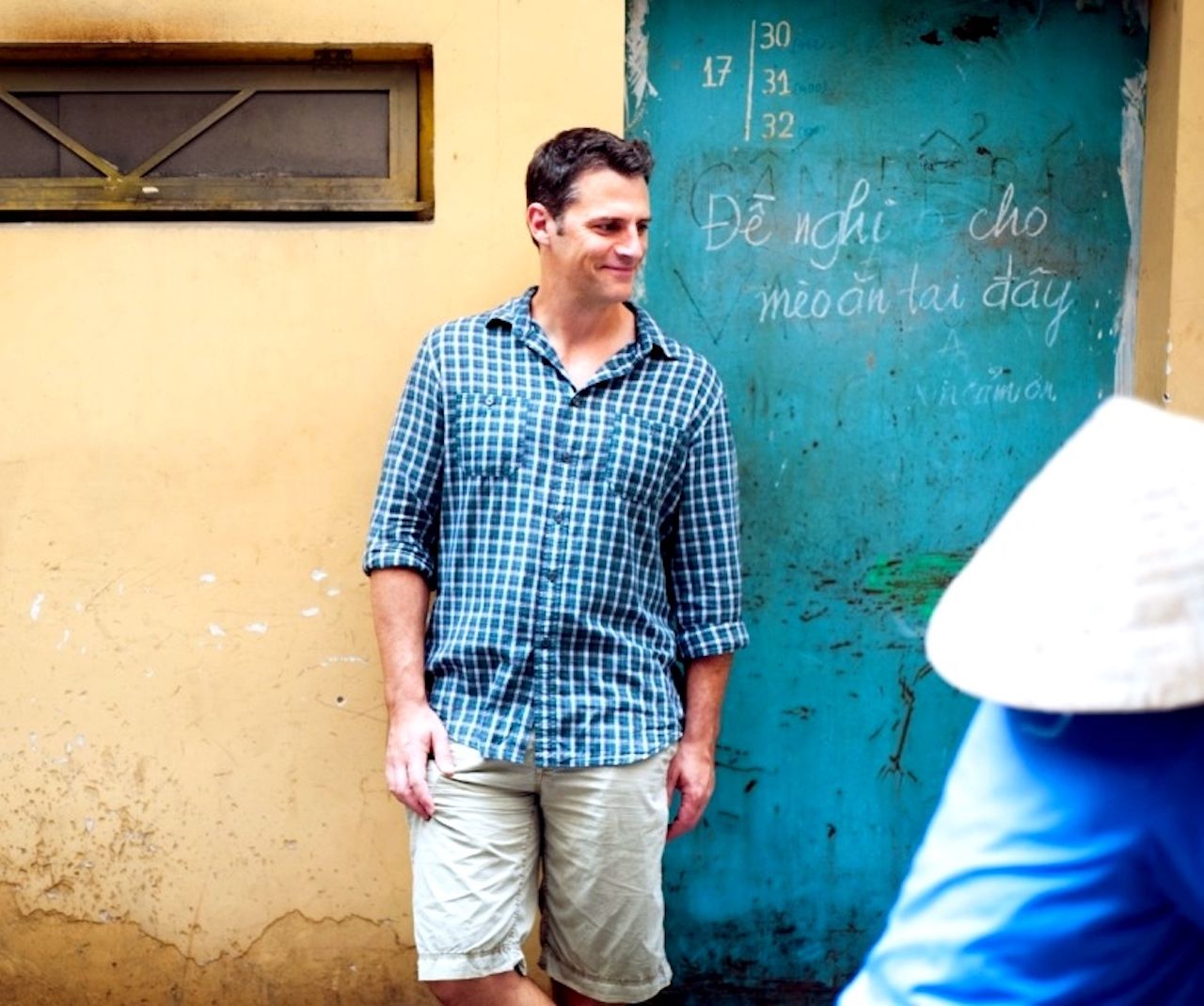 Travel Tales is a podcast hosted by American comedian and television host Mike Siegel. In this episode, Mike takes a break from working as a comic on an Alaskan cruise ship to record this interview with fellow performer Katei. Katei is a rock violinist of Korean, Chinese, Taiwanese, and Japanese descent. Mike grew up in Japan, Argentina, and Australia, and lived for several years as a musician in Tokyo. This interview contains stories about growing up Asian in white Australia, surviving the 2011 Tokyo earthquake, and making a living as a busker. It’s an easy listen, and the conversation between Mike and Katei is both good-natured and entertaining.

You can listen on the podcast’s website, Stitcher, Apple Podcasts, or Spotify.

BooksCheerful Books That Will Bring You Joy During This Isolating, Scary Time
Tagged
Entertainment Podcasts
What did you think of this story?
Meh
Good
Awesome