Wedged in the foothills of Mongolia’s sacred mountains, Ulaanbaatar might just be the biggest city you’ve never heard of. The economic, cultural, and political center of the country is home to 1.5 million citizens, about half of Mongolia’s total population. Geographically limited by the rugged landscape, UB (as the locals call it) continues to define itself as it literally grows up into a contemporary capital city. A modern skyline is rimmed by traditional ger (yurt) districts, and congested streets ultimately give way to vast open spaces. UB teeters between the rural and urban, historic and contemporary, simple and complex. It can easily fill several days on your travel itinerary, and here’s how you should fill them.

Take in the city lights and historic sites. 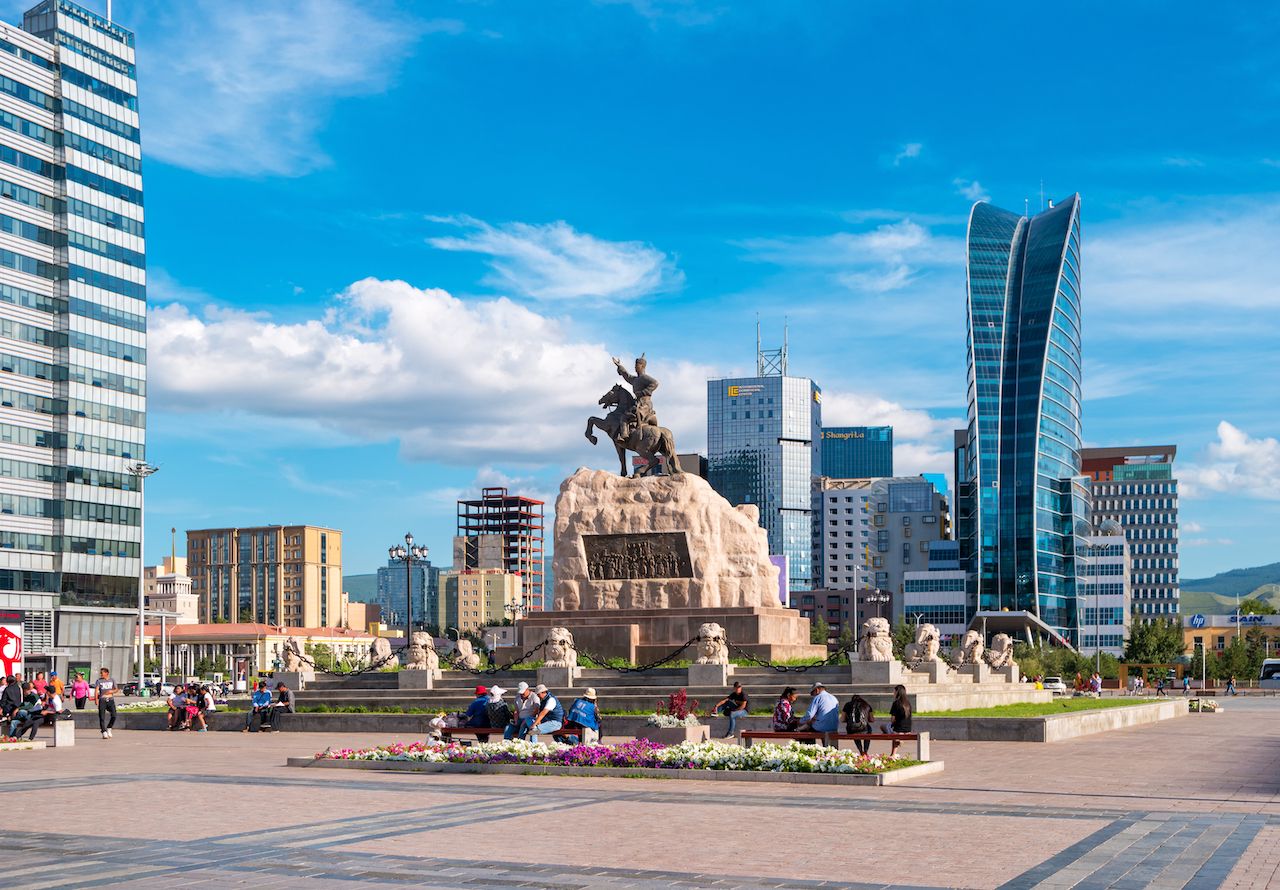 The heart of Ulaanbaatar is Sukhbaatar Square, a large plaza flanked by the city’s most important buildings, including the Parliament (aka Government House), Cultural Palace, National Academic Theatre of Opera and Ballet of Mongolia, and Stock Exchange. Huge statues of Mongolian heroes set an official tone, including namesake Damdin Sükhbaatar, who declared Mongolia’s independence from China in 1911. The ideal way to begin a trip to the city is to spend a morning walking through the square as it’s essentially a mini history lesson in itself.

Throughout the year, people gather in Sukhbaatar Square for events like state ceremonies, national holidays, and cultural displays. A national sport day, for example, showcases Mongolian athletic prowess in wrestling, boxing, football, and other sports. Should you be in town during a cultural festival, expect to see brightly costumed dancers and resonating throat singers, along with musicians playing horsehead fiddles, oversized drums, and other traditional instruments.

Despite some leftover Soviet-era architecture, significant recent development has created a respectable skyline of modern buildings. For exceptional views of the city, head to the 25th floor of the Best Western Premier Tuushin or to the top of the Khuvsgul Lake City Tower, both adjacent to Sukhbaatar Square. Just south on the opposite side of Peace Avenue, the chic Blue Sky Tower offers great views, especially from its Blue Sky Lounge.

Spend a day touring the National Museum and the Gandan Monastery. 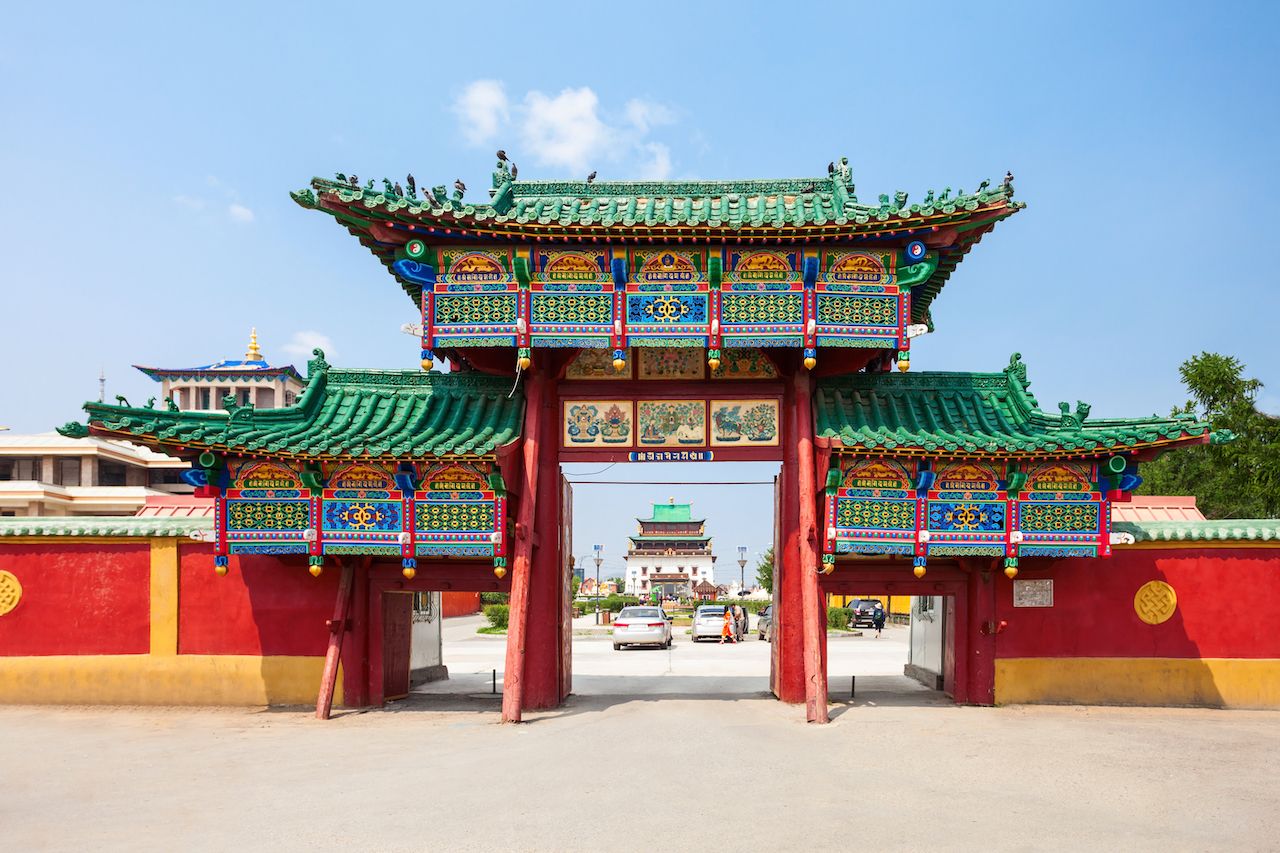 A short walk from Sukhbaatar Square is the National Museum of Mongolia, well worth its nominal entry fee to learn about generations of heroes and centuries of history, including a collection of some 57,000 objects. Permanent exhibits include prehistoric archeological findings, a full-sized traditional ger, and displays depicting the more recent socialist and democratic eras. Highlights include halls of colorful ethnic costumes, traditional musical instruments, and dinosaur relics from 70 million years ago.

Most Buddhist monasteries in the country were destroyed during the Communist regime with the exception of Gandan Monastery, the largest and most important in Mongolia. Its official name is Gandantegchinlen Khiid, meaning “Great Place of Complete Joy,” but no one will expect you to pronounce that title — Gandan Monastery will do just fine. Reopening in 1944 after being closed for several years, Gandan brought joy to Mongolia as the only functioning monastery at the time. It’s still fully functional and is home to several hundred monks, multiple temples and universities, and an impressive 87-foot-high golden statue. It is one of Mongolia’s most important tourist attractions and a place that nearly everyone you talk to in Mongolia will encourage you to visit. 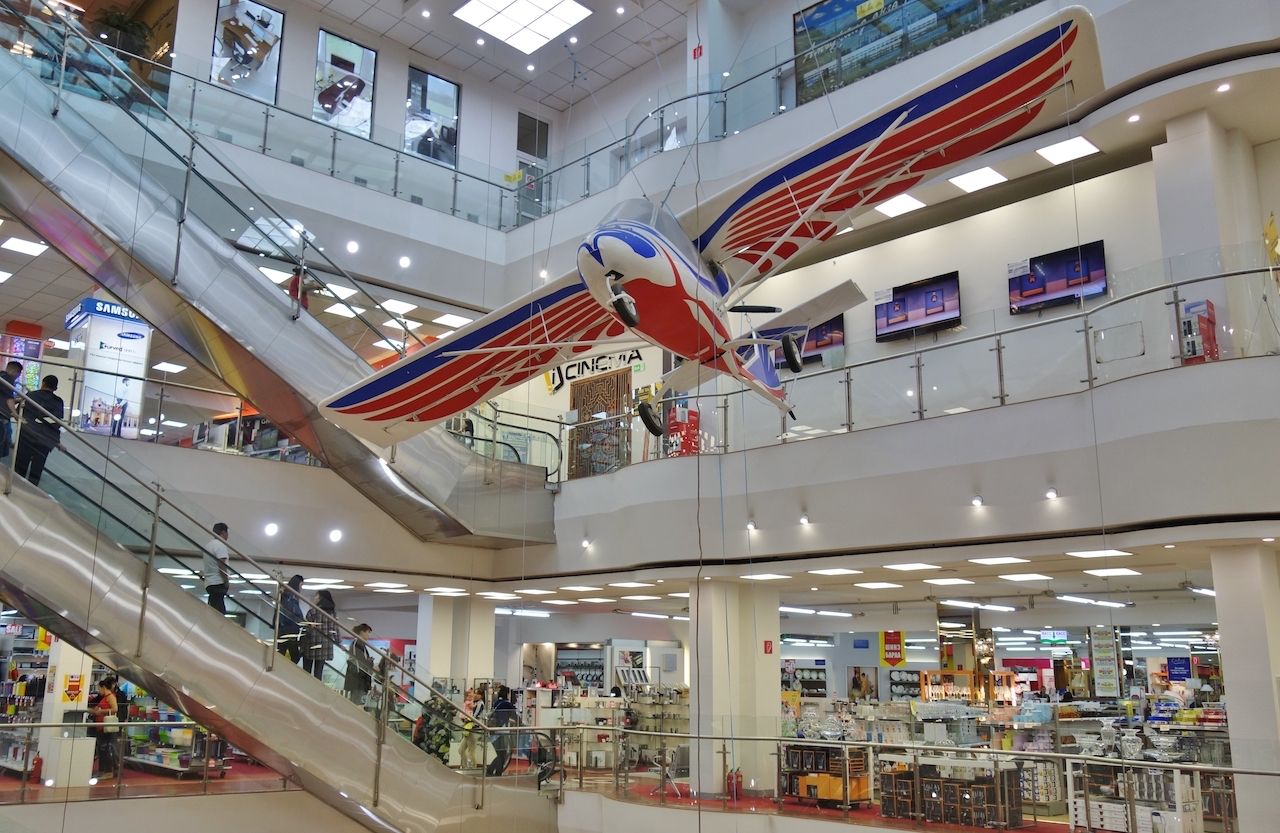 Another must-do in UB is the State Department Store whose motto is, aptly, “All needs are fulfilled.” Established in 1921, the exterior reflects the city’s dark Communist past while the interior is bright and modern. State is well worth a visit, whether seeking forgotten items, picking up Mongolian souvenirs, or looking for global name brands. There’s also some great people-watching to be had there.

Taking a bus from one end of Peace Avenue to the other will get you close to most attractions (purchase a bus card at a store or kiosk near the bus stop before boarding). It can be difficult to hail a taxi on the street and may be a good idea to pay the driver to wait when making a short stop. Official taxis can be arranged by hotel or restaurant staff. Since few taxi drivers speak English, it’s best to have the name and destination written in Mongolian for the driver. Traffic is heavy and can be gridlocked — plan ahead if on a schedule.

Rethink your knowledge of meat. 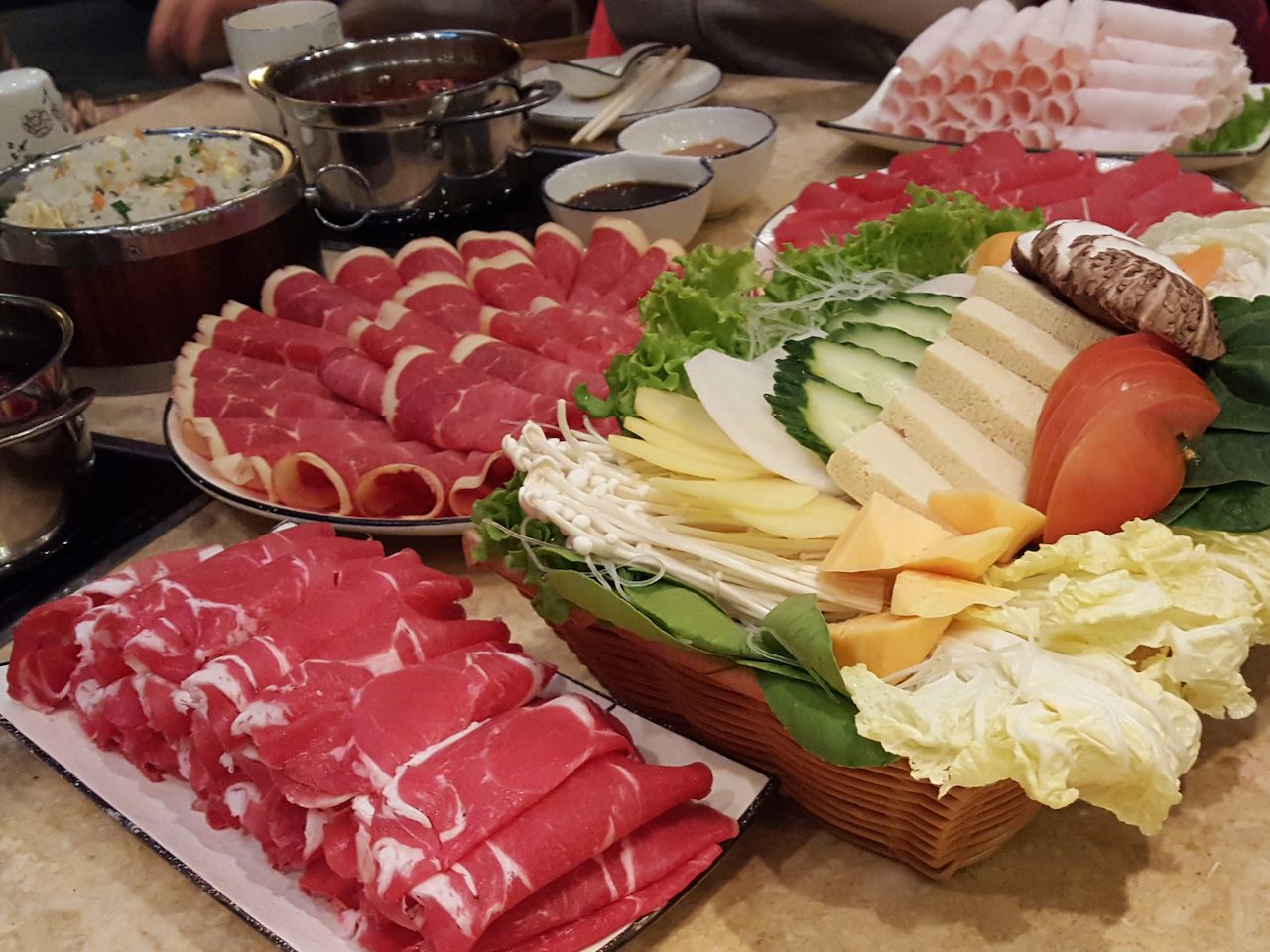 On the culinary side, UB offers both local and international cuisine, so whether you are an adventurous eater or looking for the old standards, you’ll find good fare here. Meat is king in Mongolia, and near the city center there are many spots to dive into a good local meal. Most traditional dishes feature beef, goat, mutton, or horse; however, poultry, pork, and vegetarian dishes are offered at most urban establishments. Dumplings of various shapes and sizes are traditional and popular.

Among the best spots to try these meats is Khainag Grill, on top of the four-star Khuvsgul Lake Hotel in the Sukhbaatar District. The restaurant serves organic meats cooked on a grill right at your table. You’ll don an apron before you grill your own meat with options ranging from typical beef, pork, lamb, and goat to more uncommon animals like yak, camel, and reindeer. Choose one or get the chef’s taste, which includes four types of meat. Try a Mongolian beer or vodka with your meal, then hang out at the uber cool rooftop terrace surrounding one of only three helipads in the city.

Hot Pot restaurants are also popular in Ulaanbaatar, and they’re your best bet for value. Diners are served a hot broth into which they add noodles, raw meat, and vegetables that cook on the table over a burner. A popular location is the Bull Restaurant on the third floor of the Bluemon Center, northwest of the main city square.

For a unique casual dining experience, check out Black Burger Factory located near Sukhbaatar Square. Their black-bun burgers are more than a novelty — they’re so juicy that you can request a pair of black plastic gloves to wear while eating. The menu includes several burger choices with a diverse array of sauces and fresh vegetables.

Visit Route 22 Restaurant and Wine Lounge for date night, or a similar occasion where a touch of extravagance is needed. The menu features salmon, seabass, truffle risotto, salads, and pastas, though the charcuterie board is stunning and a meal in itself. An extensive wine list includes imports as well as domestic; however, when I tried to order a Mongolian wine, the waiter refused to serve even a sample, hinting that it’s best to stick to imports.

Getting here and staying a while 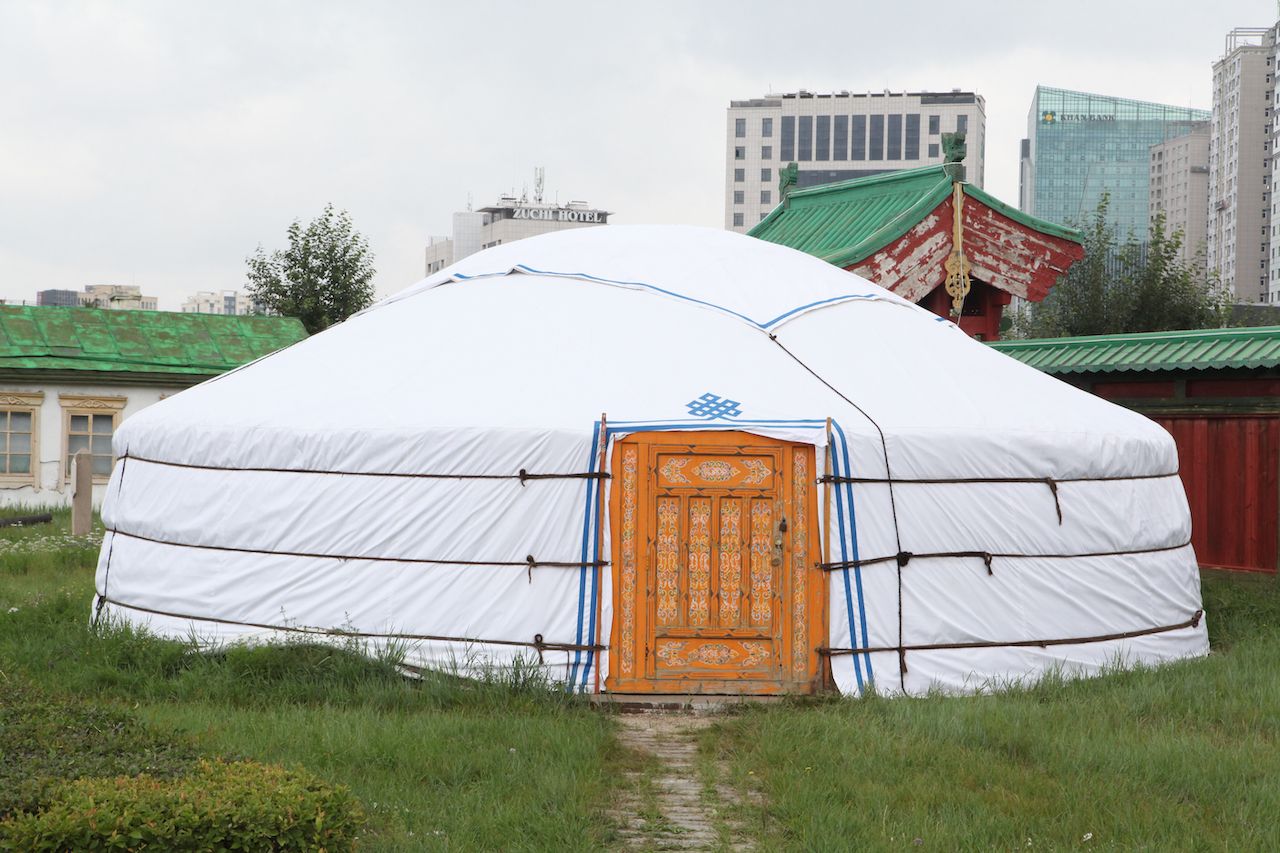 As noted by the many building cranes dotting the skyline, Ulaanbaatar is a city quite literally on the rise. After years of delay, a new international airport is slated to open in 2020, replacing (and assuming the name of) the current Chinggis Khaan International Airport. Tripling passenger capacity with daily flights arriving from China, Russia and South Korea, the new airport means you can get here from North America by connecting directly in those countries. For a reportedly more quaint experience, hop the Trans-Siberian railway from Moscow or Beijing, transferring to the Trans-Mongolian route that cuts the city from north to south.

Once you arrive, Ulaanbaatar offers a wide range of accommodations from hostels to five-star hotels. With most historical and cultural attractions located within a central walkable area, stay near Sukhbaatar Square to avoid the traffic that often stands the city still. Centrally located hotels like Best Western Premier Tuushin, Khuvsgul Lake Hotel, and Blue Sky Hotel and Tower feature modern rooms,contemporary bars and restaurants, and great service at a price point typically under $100 per night. Keep it even more affordable by staying in a hostel. The best options include UB Guesthouse & Hostel, Golden Gobi, Okay Hostel, and Town Yard Hostel.

To really dive into Mongolian culture, though, Mongol Nomadic Ger Camp, 34 miles from the city, offers the opportunity to sleep in a traditional nomadic hut with modern conveniences including electricity and internet access. You’ll experience a performance of the nomadic lifestyle, including traditional food and drink, games, throat singing, and music.