Crowlers have become the toilet paper of the brewing industry.

Not that guys with beards are fighting over 32-ounce stainless steel cans at the local brewers’ supply shop. But a nationwide shortage of crowlers has created a level of desperation that’s driven some beer makers to extremes.

“Our supplier said they have a spot up in Jacksonville where we can pick up 300 crowlers they’ve allocated for us,” says McKay Ferrell, operations partner at Gulf Stream Brewing in Fort Lauderdale, Florida. “They said, ‘We can’t ship them out, but if you want them, come get them.’ So we hit up our contacts, pooled some resources, took the day trip up and back to make sure we can get them here.”

This week, he sent a member of his Gulf Stream Brewing team over 300 miles north to Jacksonville. He doesn’t expect his crowlers to last through the weekend. 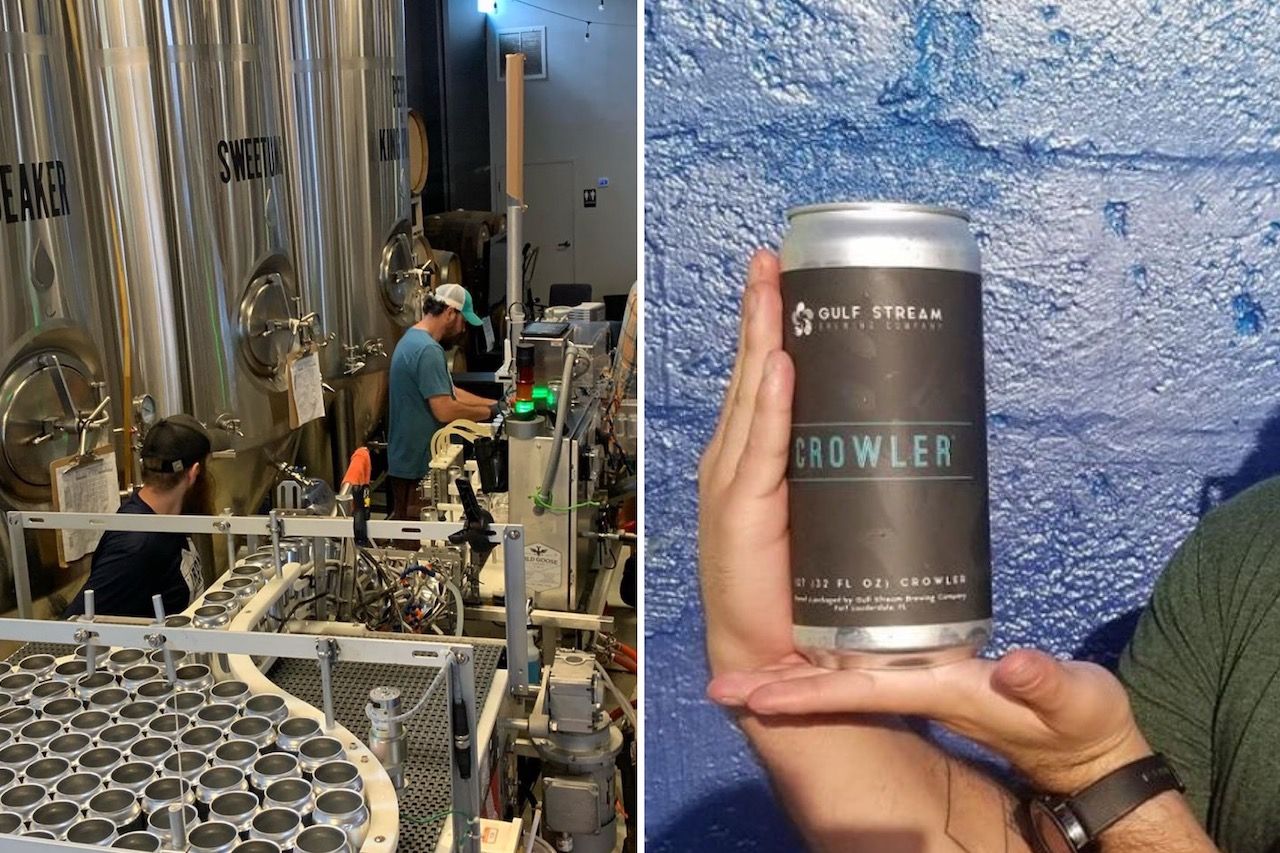 Gulf Stream and South Florida aren’t the only places crowlers have become near-impossible to find. Since nearly every craft brewery in the United States has had to temporarily shut down its taproom in the wake of COVID-19, they’ve shifted focus to package sales. For breweries without large-scale canning operations, that means selling beer in crowlers.

That’s crowlers, with a C. Crowlers are 32-ounce sealable cans that brewers can quickly fill on-demand, one at a time, for people who want about two beers’ worth to go. Not to be confused with growlers, with a G, the large, glass, 64-ounce containers many breweries have used in the past.

So why the sudden popularity with the smaller format?

“The crowler gives you a fresh taste, and its two pints so it’s easy to consume,” says Julian Siegel, who runs Tarpon River Brewing, also in Fort Lauderdale. “Once you get to a 64-ounce jar, that’s four beers. That’s a big commitment.”

Brewers also like crowlers because it allows them to sell beer that’ll be quickly consumed, and consumed at its freshest.

“I think the general drinker understands once they open a growler, beer starts to oxide and decarbonate,” says Brett Taylor, the head of brewing at Wild East Brewing in Brooklyn, New York. “We like it from the standpoint [of] you open it, [then] you signed up to drink those two pints, and it ensures people drink fresher beer.”

It’s also a lot cheaper than canning, the other way craft breweries are still pushing out their product. A crowler machine — which seals the large-format cans — costs a couple thousand dollars, according to Taylor. A full-scale canning line starts at $100,000, and it only goes up from there. Many small brewers also use canning services, who bring portable canning lines to breweries and can for them. But those are also expensive.

“You have to pay for three people to be there all day to operate the machinery,” Taylor says. “Not to mention any of your own people you have to bring in. Then you still have to put on plastic sleeves, palletize. It’s a decent amount of work.”

A seldom-used format suddenly flies off the shelves 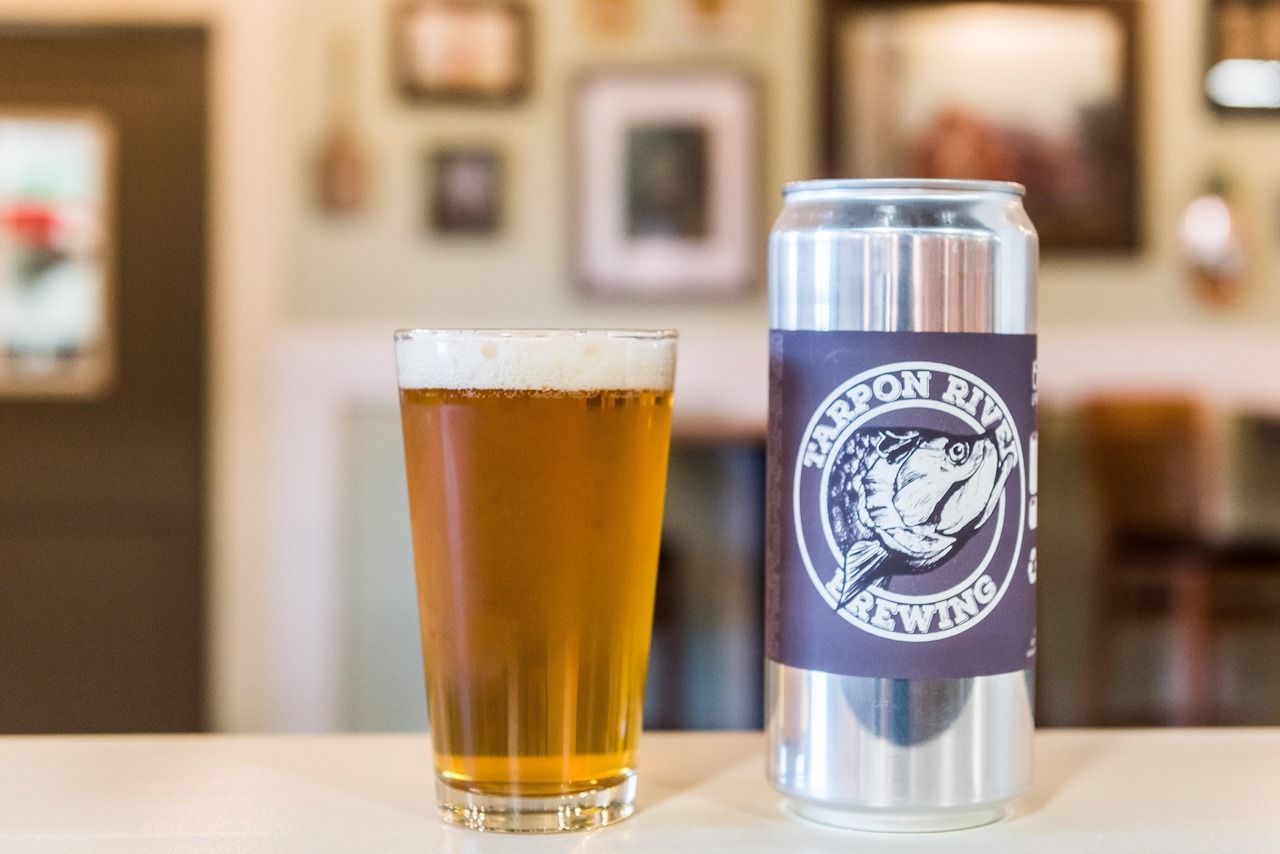 Craft breweries never anticipated this kind of demand for crowlers, and since most businesses base supply orders on previous sales data, they’ve been left scrambling with increased demand.

Though his brewery received an order of crowlers right before it was forced to close, others in the area have not been so lucky. In true beer-community fashion, he lent and sold his crowlers to other local brewers at cost, unlike toilet paper hoarders.

Nearby in Rochester, Rohrbach Brewing had just begun offering crowlers at the beginning of March, and ordered about half as many as they’d anticipated needing, just to see how it went. That did not end well.

“We were not built to be a completely takeout operation,” Joel Will, the brewpub manager, says. “I think we sold 120 of them…it was chaotic, we weren’t prepared for it at all. So we just shut down, and have to reassess how to do things.”

The brewery closed all of last week and is reopening this weekend, though Will said he’s still looking at an eight-week lead time to get more crowlers.

The crowler craze caught manufacturers by surprise too 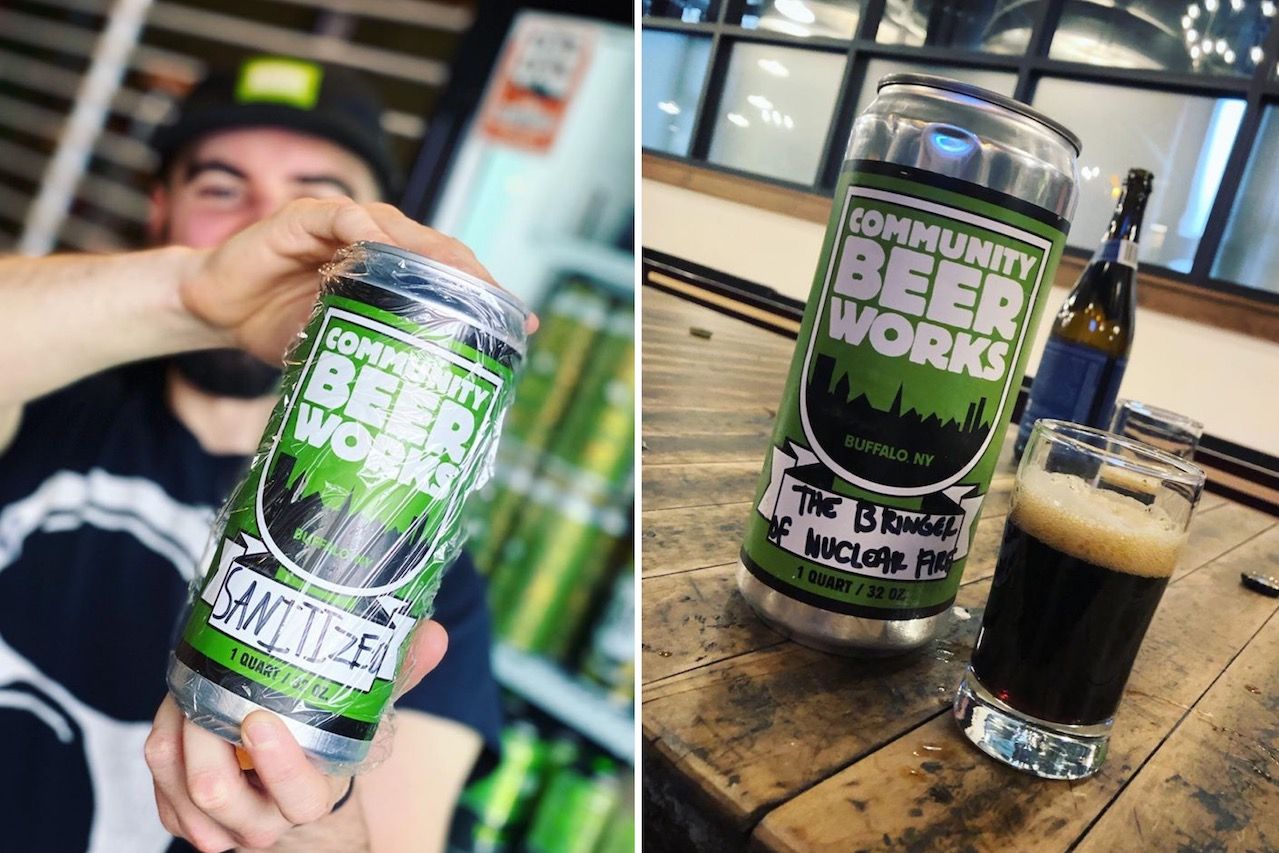 So why can’t breweries just order more crowlers? Well, for those not overly familiar with the nuances of supply chain management, brewers have to order the crowlers from either a distributor or a manufacturer. The problem is, there’s really only one company who manufactures crowlers: Ball, a name you may also recognize from your hipster-chic mason jars. And that company hadn’t anticipated this kind of demand either.

Ball makes crowlers once a quarter, based mostly on previous sales data. Which means for this quarter, it made a lot fewer than breweries need with spiked demand and doesn’t have inventory to send out. Hence the backlog.

“Things are pretty busy,” says Ball spokesperson Scott McCarty in a brief email. “(We’ve) adjusted our production to help meet that demand, and additional cans moved into the market. We will continue to work with our customers on their needs.”

Distributors were so slammed, each one we reached out to responded with a polite variation of “We’re too busy to talk to you right now.” Clearly, the chaos extends far past craft brewery taprooms.

Cans, and even soup cups, filling the void 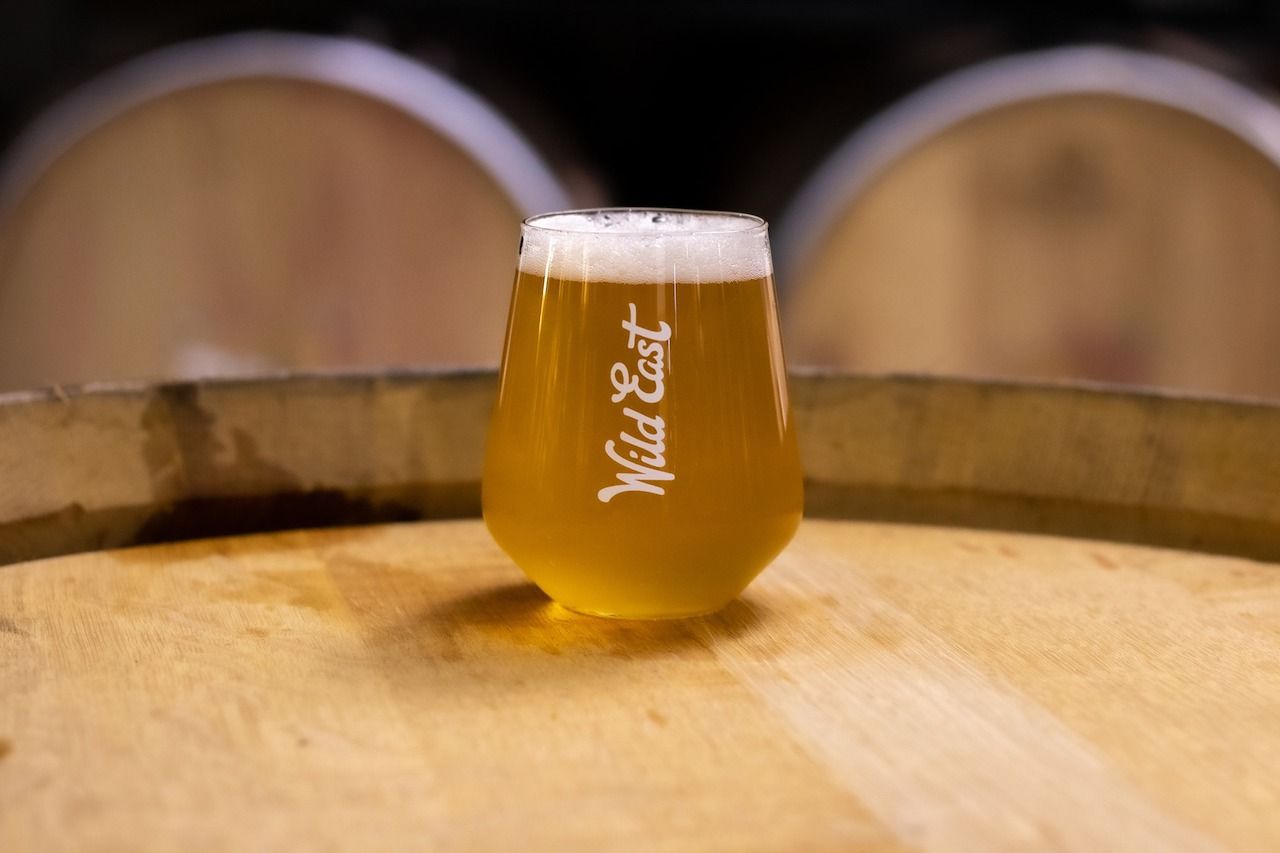 Americans’ collective thirst for beer won’t be going away any time soon, so brewers, like anyone looking to survive, are finding ways to get it to them.

Mostly, they’re focusing on canning beer and distributing it both in their facilities and through grocery stores.

“We have a canning line, if we did not, I do not know how many ways we’d be fucked,” says Community Beer Works’ Cox. “Even with the canning line, we have a lot of beers that were drafts or taproom release only.”

Other breweries are shifting their production to focus on beers they’re already set up to put in traditional cans, of which plenty are available.

SLO Brew had the misfortune of reaching the end of its supply right when the taproom shut down. Kerr said he’s looking at an eight-week lead time until he can get cans from his distributor.

“There’s a shortage because restaurants are trying to package beer now as well,” Kerr says. “And since ABC relaxed the laws on to-go containers, they’re packaging it in anything with a lid. To-go containers, soup cups, anything they can get their hands on.”

Kerr’s brewery has stopped short of selling beer in soup cups, and is also steering away from growlers as well, Every brewer we talked to was hesitant to do growler fills, both because the containers are bulky, heavy, and expensive, and because customer growlers can’t be guaranteed sanitary, so they’re forced to use a new growler every time.

Back in Fort Lauderdale on a recent sunny afternoon, Gulf Stream is back to serving beer to-go and enjoying a fresh supply of crowlers that just arrived from Jacksonville. Its drive-through operation is full of cars, many also grabbing a pizza from the brewery’s pop-up pizza shop.

“There’s definitely a run on them, and I don’t think they’ll be around for long,” Ferrell says of the crowlers, and maybe the pizza. “But it was definitely worth the investment.”

BeerRochester Has Reinvented Itself as the Northeast’s Best Beer Town
Tagged
Beer
What did you think of this story?
Meh
Good
Awesome