You know what sounds great right about now? A beach. Some nice, calming, lapping waves and a soft patch of sand to lay your head down and forget about all the problems of the world. If you can imagine yourself there, it’s not so far away. It’s right in this country, which, with 88,000 miles of coastline and countless inland lakes, has an abundance of places you can spend the night next to the water. Here are 15 of our favorite beachfront campgrounds, from the deserts of New Mexico to the shores of Alaska. 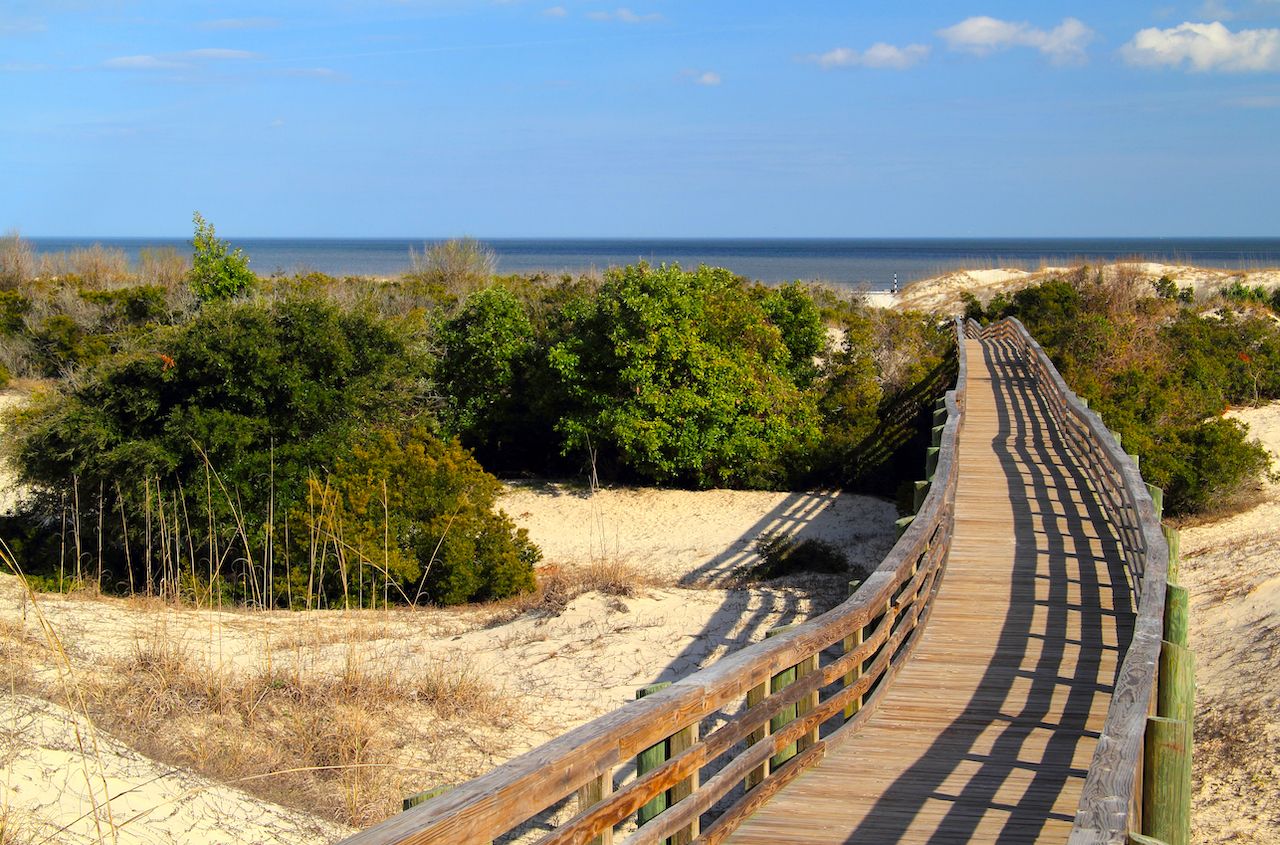 Cumberland Island National Seashore is some of the most remote, pristine wilderness in the South. And as the island is only reachable by ferry, the best way to see all of it is by spending the night. Camping here isn’t abundant, with only five spots island-wide, but the most popular is Sea Camp. After the last ferry leaves at 4:30 PM, you’ll have most of this woodsy island to yourself, with miles of hiking trails going deep into the forest. Just remember to bring your bug spray and prepare for all kinds of weather if you go in the summer. The island’s isolation is nice, but it also means you won’t have anywhere to buy supplies once you’re there. 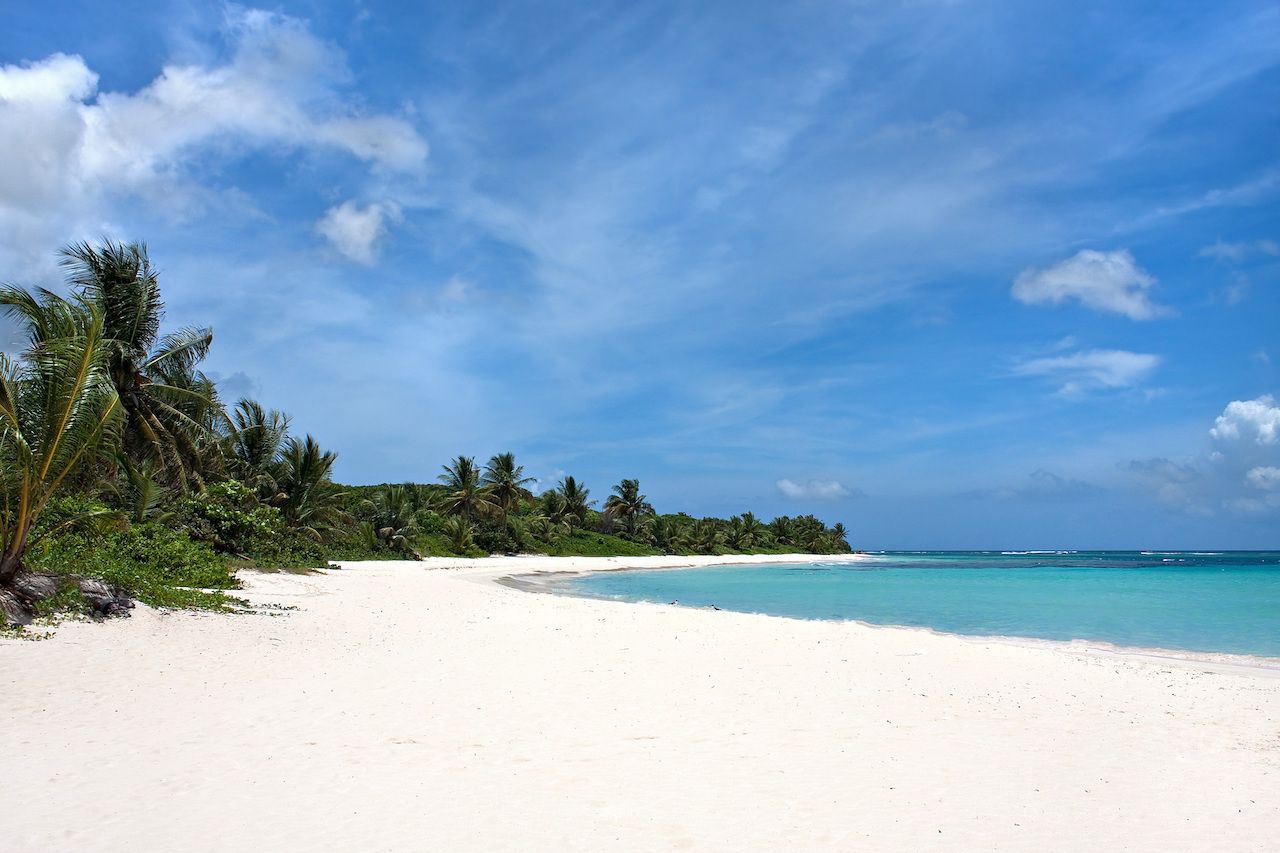 While much of Puerto Rico has been developed with hotels, resorts, and fancy restaurants, the little island of Culebra not far from St. Thomas still feels like an unspoiled tropical paradise. The only place to camp here is at Flamenco Beach, where you can literally pitch a tent on the sand and grill up whatever you like on one of the pit barbecues provided. Don’t have a tent? No problem. Flamenco is cool with you stringing a hammock between palm trees and being your best beach bum self. And though it’s only steps to restaurants, shops, and bars, look towards the water and you’ll feel miles from the real world. 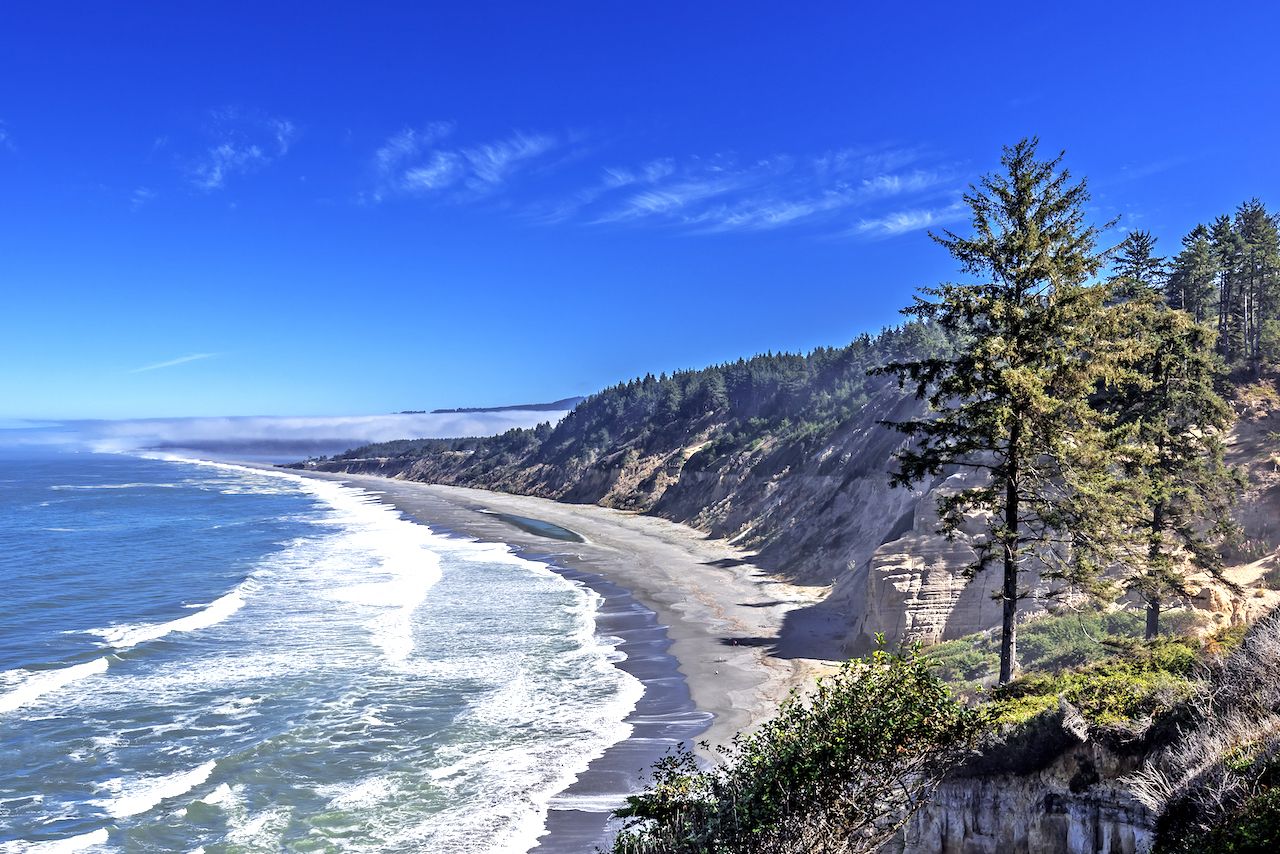 Just south of Redwood State and National Parks is this one square mile of Northern California paradise, a little peninsula jutting out into the Pacific where you can hike through deep forests down to tidepools rich with marine life. Patrick’s Point is also home to a fully reconstructed Native American village from the Yurok tribe if you’d like some cultural education during your camping trip. The campsites aren’t right on the ocean, and given the violent surf in this very northern part of the state, that’s probably a good thing. But they’re only a short walk to the coastline and offer hot, coin-op showers and fresh drinking water. 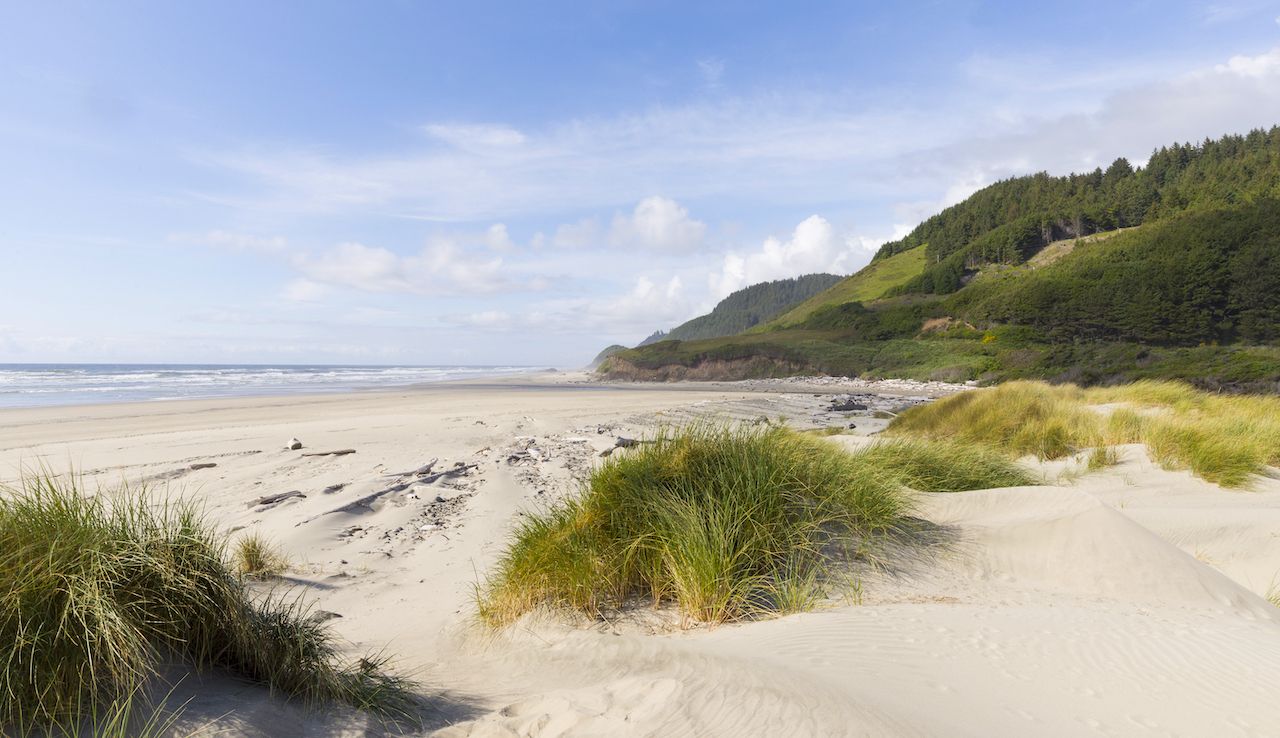 You’ll find no shortage of camping sites along Oregon’s wild coastline. But this park between the town of Waldport and Yachats State Park is almost smack in the center of the state, and every campsite is just steps from the Pacific. Wake up to the crashing waves, then head to the marine tidepools to catch a morning breeze before venturing down to the Heceta Head Lighthouse. You can also take a short walk along the Yachats Ocean Road State Natural Site, a one-mile loop off the main highway that winds past some of the state’s top spots for whale watching. 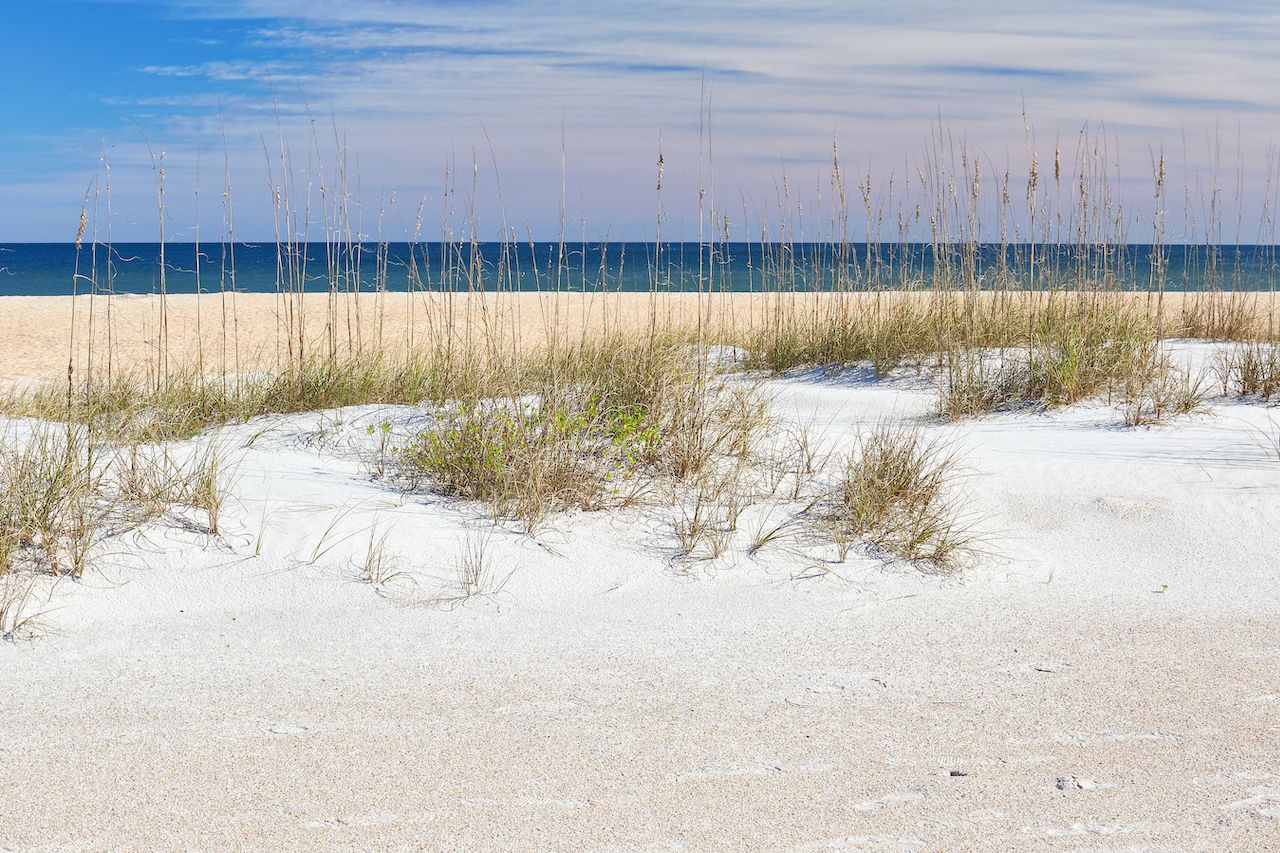 Northeast Florida is often overlooked in terms of Sunshine State beaches, forgotten behind the white sands of the Gulf Coast and towering condos in South Florida. But that’s precisely why this park outside St. Augustine is such an ideal camping spot, with golden sands and rolling dunes from which to watch the sunrise and fewer people than you’ll find in the rest of the state. Inside the park you can hike through the dunes and natural hammocks, as well as back to a coral quarry dating to the 1700s. Then you can retreat to one of 139 campsites under swaying palm trees. 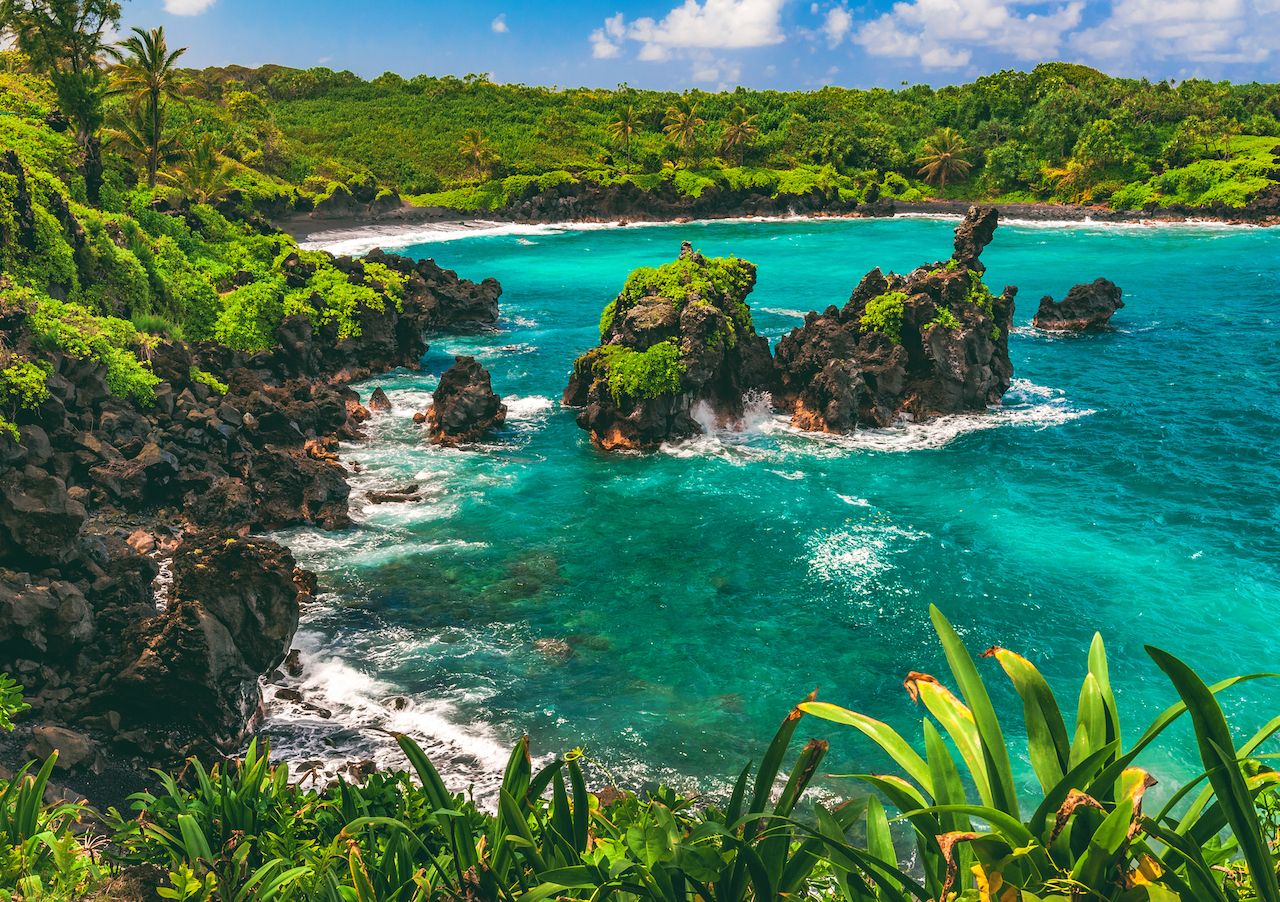 Maui’s reputation as Hawaii’s quieter, rural island can sometimes overshadow the impressive volcanic features on the eastern coastline. They’re on full display at Wai’anapanapa State Park, full of natural arches, blowholes, caves, and black sandy beaches. Here you can camp next to the Pacific surf by night, and hike along an ancient trail leading to Hana by day. Or venture deeper into the park through the hala forest to anchialine pools, which connect underground to the ocean. 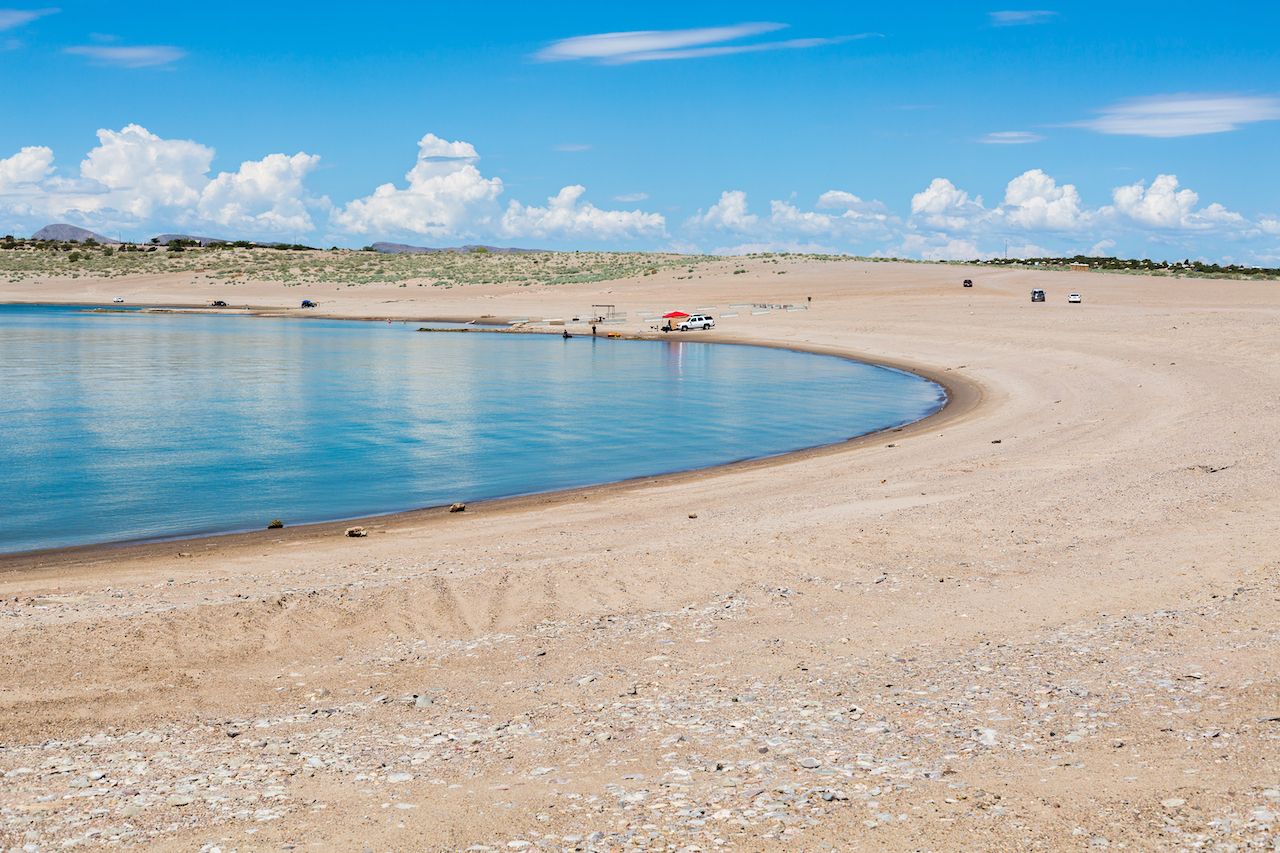 The vast red rock deserts of New Mexico aren’t automatically where you’d expect to find first-rate beach camping, but thanks to a dam built along the Rio Grande in 1916 you can now find it on the shores of Elephant Butte Lake. Beach camping in the desert seems a little surreal, but once you’re out on the lake fishing, waterskiing, or just generally cooling off from the heat of the Chihuahuan desert it feels completely natural. The two major campgrounds — Lions Beach and Desert Cove — both have electrical hookups too. So while you may feel isolated in the desert, you’re never far from civilization. 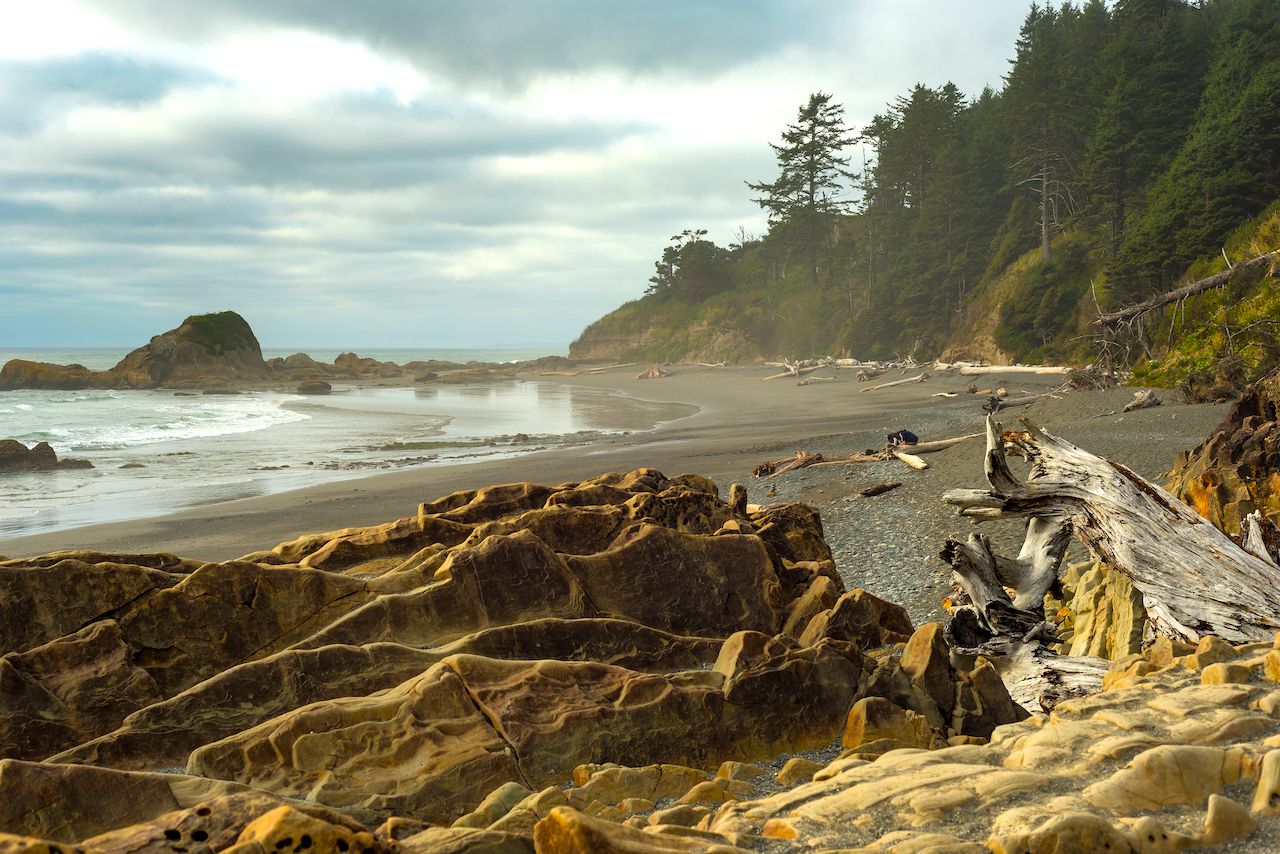 Along the southwest coast of Olympic National Park, you’ll find this campground set between Highway 101 and a cliff atop the Pacific Ocean. The campsites at Kalaloch sit on said cliff, where you’re only a short staircase walk to the beach, and will have a much better view and a lot less ocean mist. That said, if you’re hellbent on camping by the water, hike the short trail to Second Beach. You’ll need a wilderness permit and a bear canister to spend the night there, but for the best ocean camping in Washington, it’s worth the extra shopping. 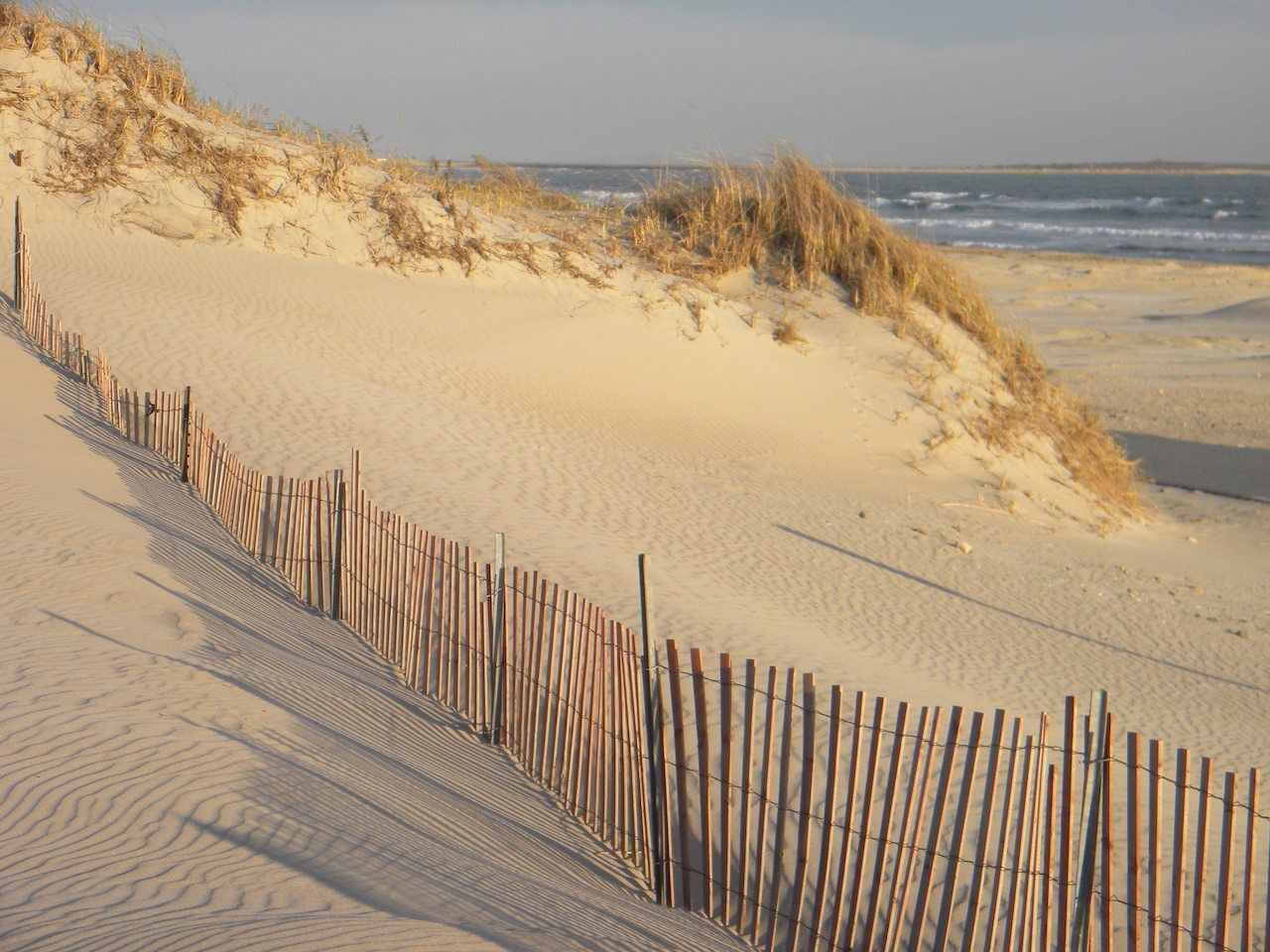 This two-mile, soft-sand beach just across a causeway from Gooseberry Island is a massively popular summer destination for New Englanders, drawing almost 100,000 visitors a year to its lush 800 acres. The park, which among other things was a casino and a coastal defense base, is popular with windsurfers for its strong breezes and offers 96 campsites as well as hook-ups for most RVs. 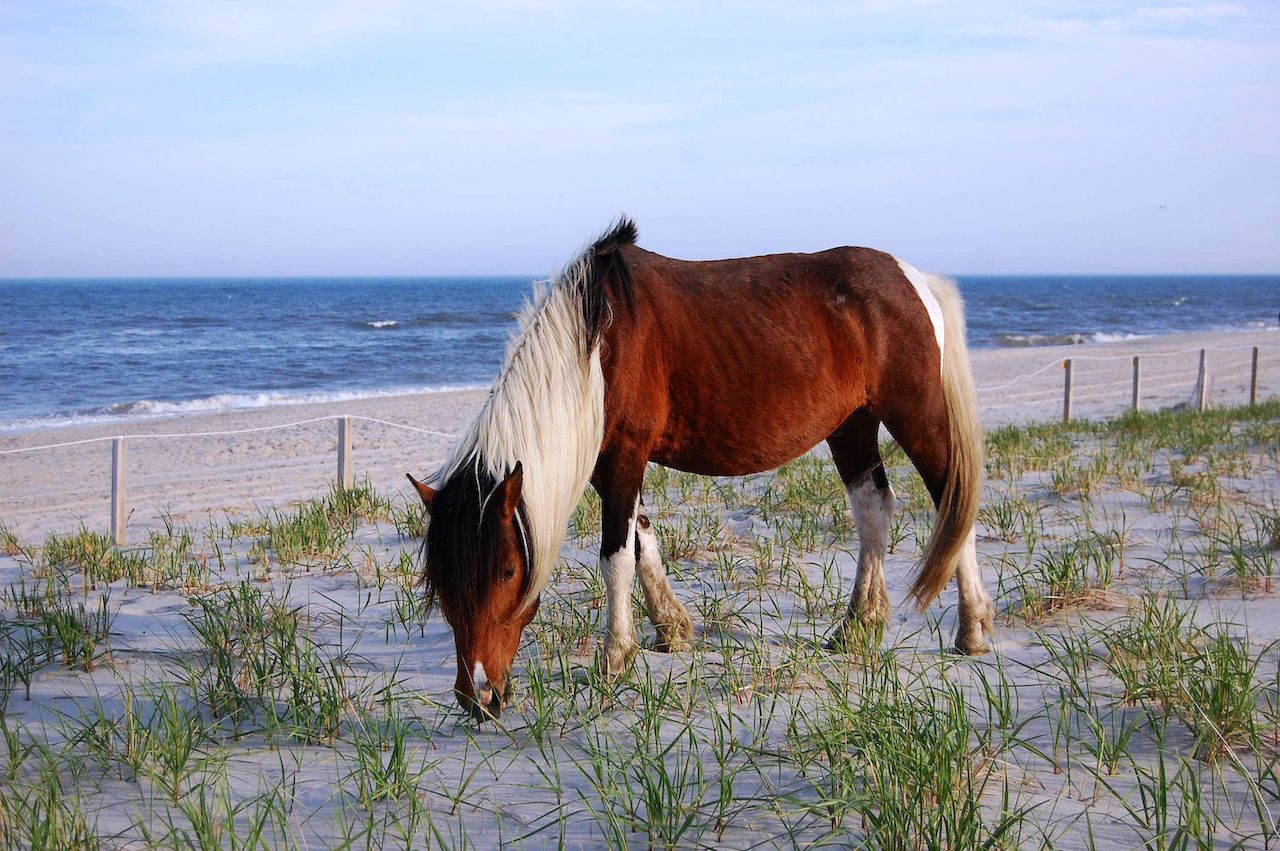 Get as close to being an old cowboy as you possibly can in 2020 on the Maryland side of Assateague Island, where from October to April you can ride right along the beach, hitch your horse to the appropriate posts, and camp right near the ocean. The sites are across a small dune line from the actual sea, but they afford a nice barrier to ensure you don’t wake up to ocean water in your tent. If you’d rather go during warmer months, you can still walk in or car camp as well. And if you take the time to hike around, you might meet one of the park’s famous wild horses. 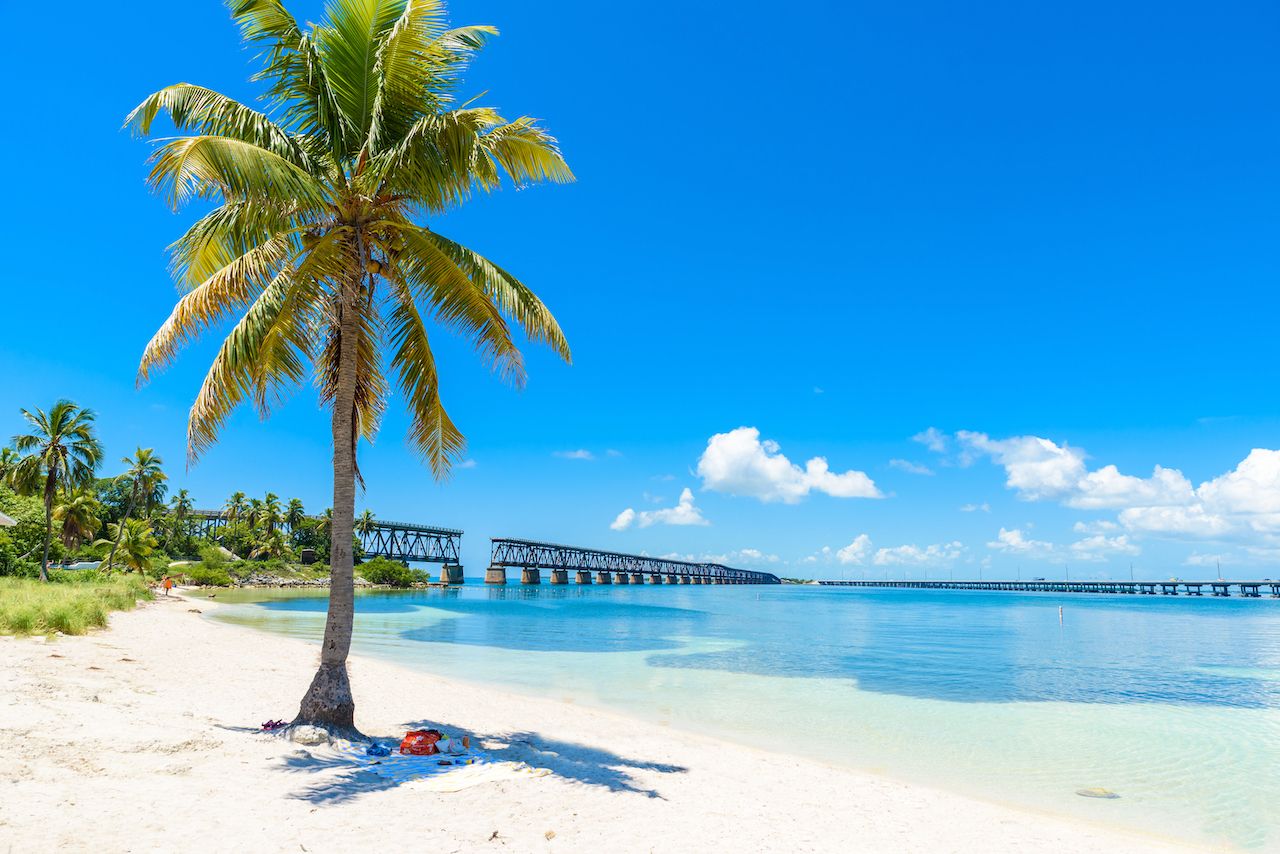 Dubbed America’s Best Beach by the esteemed Dr. Beach in the ‘90s, Bahia Honda’s white sands and aquamarine waters are the picture of a tropical Florida vacation. The most scenic campground is on Sandspur Beach, which offers nine sites a stone’s throw from the ocean. Even if you don’t have a front-row seat to the water, it’s only a short walk anywhere in the park’s 500 acres to the shore. Once in those inviting seas, you’ll find some of the best snorkeling in Florida, as well as warm currents to calm you after a long drive down. 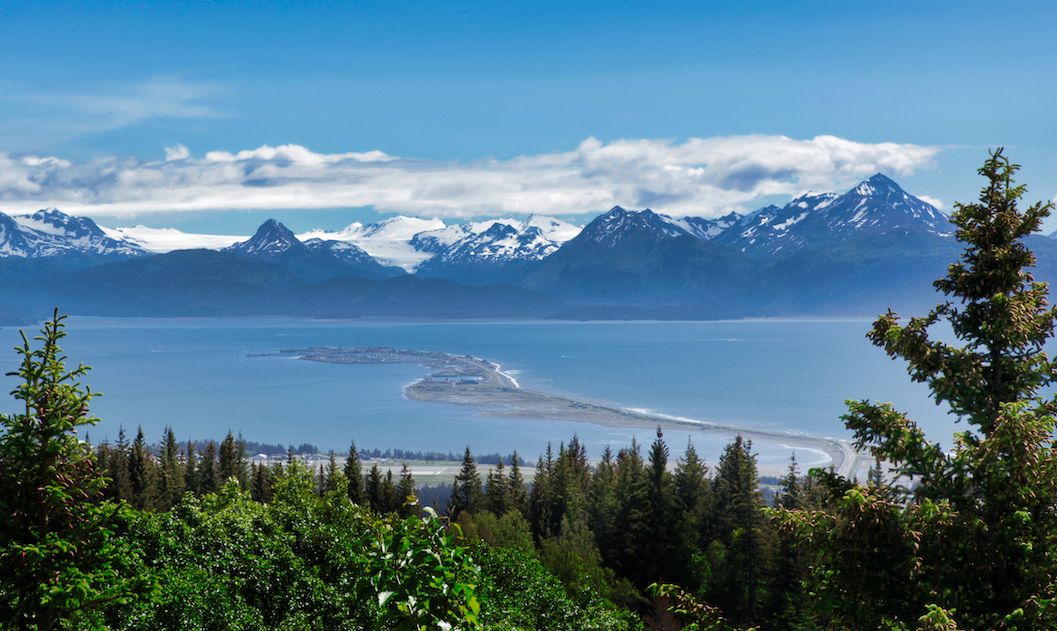 We wouldn’t go so far as to call Homer Spit “glamping,” but as far as waterfront camping with a direct mountain view in Alaska goes, this is about as nice as it gets. This campground, set right on the shores of Kachemak Bay, offers 122 RV sites with full hook-ups, a gift shop, hot showers, and free WiFi. It’s also just a short walk to bustling downtown Homer, where charming shops and the Salty Dawg Saloon await. And if you feel like getting out into nature, the campground serves as a perfect launching point for kayak trips into the bay or one of the dozens of hiking trails in the area. 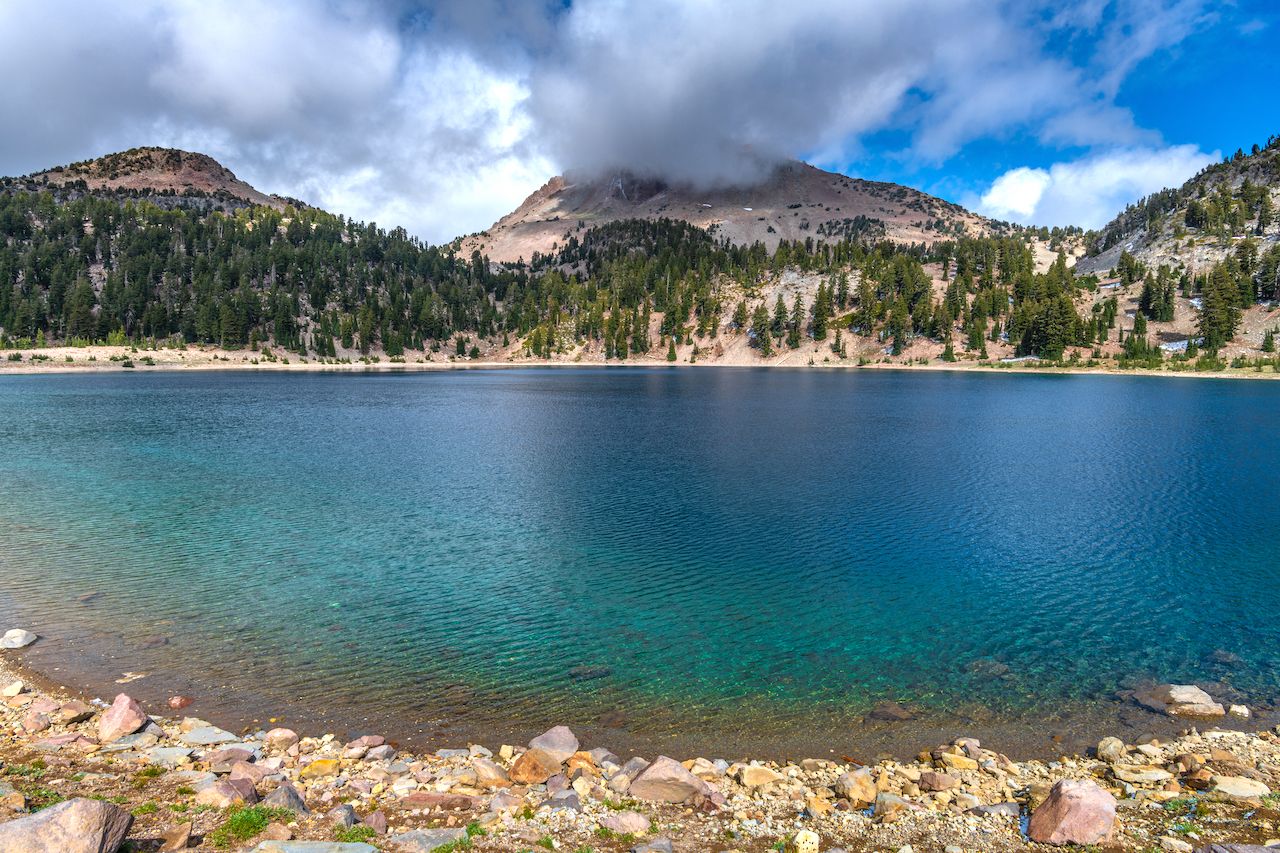 Sometimes forgotten after the waterfalls, rock faces, redwoods, and sequoias of California’s big name national parks is the volcanic wonderland at Lassen. A little over an hour from Redding, Lassen Volcanic National Park offers eerie lavascapes and treks up to the top of Lassen Peak. It also boasts the best inland campground in the state, where the bright blue waters of Juniper Lake reflect the surrounding trees and snow-capped mountain. Though the views are spectacular, the accommodations are spartan, as you won’t find any potable water or flush toilets. Still, if you don’t mind bringing all your stuff with you, you’ll find one of the most peaceful escapes in California. 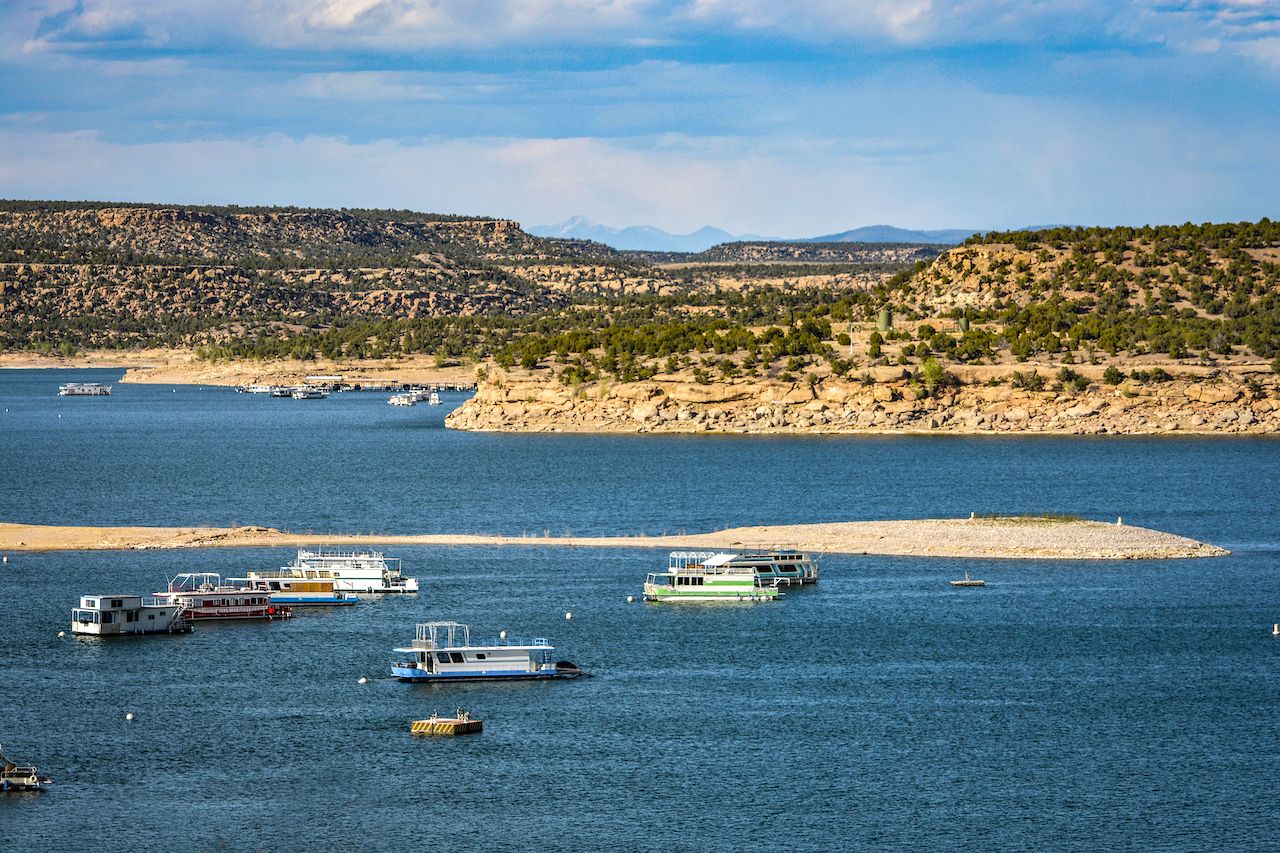 Colorado has no shortage of mountain lakes by which to camp, but the state’s ultimate beach camping experience will be along the shores of Navajo Lake near the New Mexico border. Here you can plop yourself and your family on the primitive sites at Windsurf Beach. Or, if you want electricity and water, make your home at the Rosa Campground, which overlooks the lake. During the day, you can partake in all varieties of watersports, from fishing to boating to lake-long swimming. Or just post up on the sand and work on your not-so-mountainous mountain tan. 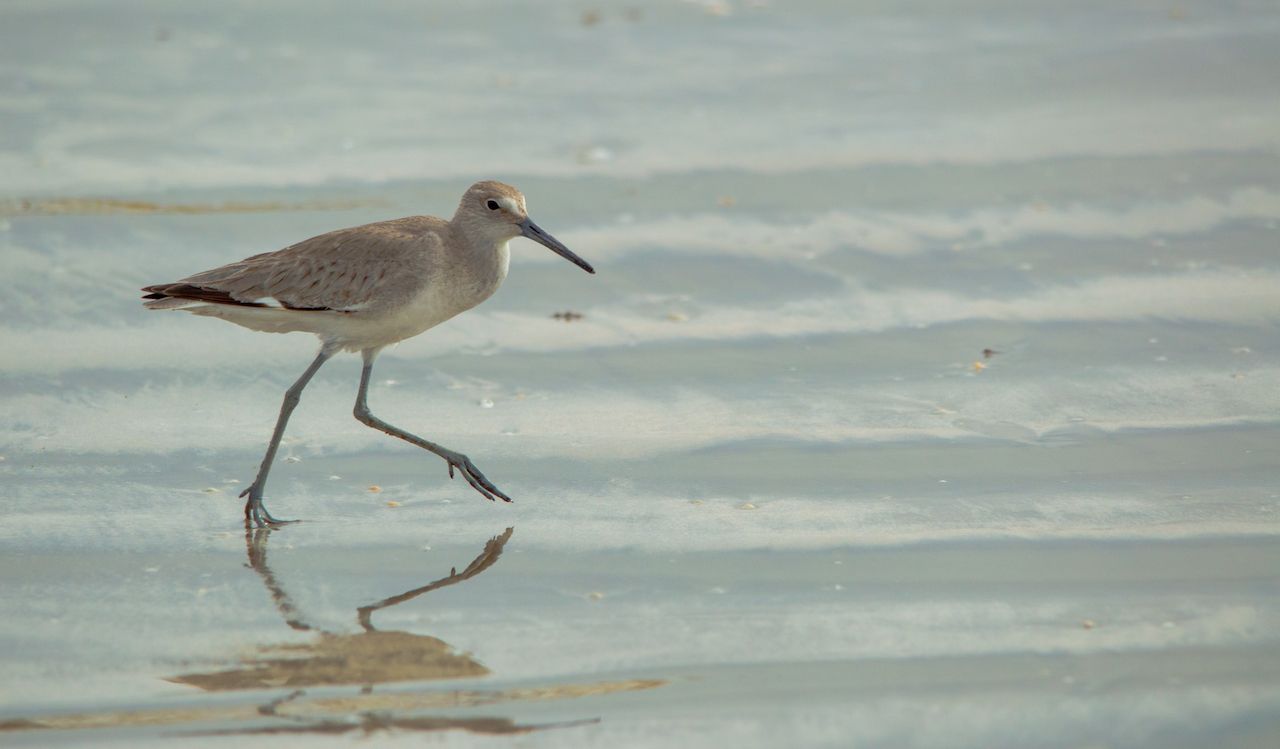 About half an hour south of Port Arthur you’ll find this peaceful, bird-filled marshland park right on the Gulf of Mexico. The 4,000-acre park is one of the top kayaking destinations in Texas, with trails running up to 10 miles for those looking for an all-day paddling challenge. Even for recreational paddlers the park is fantastic, where serene trips through the marsh can be followed by quick jumps in the gulf. You’ll find plenty of places to set up camp on the five miles of shoreline, or you can opt for the lone cabin in the park. For a real adventure, head two miles down the kayaking trails to the primitive floating dock sites, where the only way in or out is by boat.

CampingCamping Your Way Up California’s Highway 1
Tagged
Beaches and Islands Camping Parks + Wilderness United States
What did you think of this story?
Meh
Good
Awesome