For the uninitiated, Ethiopia might seem like a country where the cuisine tends to be centered heavily on spiced meat dishes. The truth is, some of the most flavorful vegan and vegetarian cuisine on the planet comes from this East African country. If you closely examine Ethiopian food, you’ll find a cornucopia of plant-based dishes that integrate the country’s lush and abundant plant and vegetable life, from lentils and garlic to mushrooms and collard greens.

In Ethiopia, most meals are eaten with the hands rather than with the silverware you’ll find on most dinner tables in the West. That’s where injera comes in. Ethiopian meals start with injera, a sour, fermented, spongy flatbread. Not a meal itself, it’s more of a utensil, used as a way to soak up and eat the main course. Etiquette says that you tear off pieces of injera and use it to scoop up the other elements of the meal. Injera is usually paired with wat (or wot), a heavy, spicy stew of lentil beans, various vegetables, and sometimes lamb or beef.

But there’s much more to Ethiopian cuisine than flatbread and stew. Here are 10 vegan and vegetarian dishes from Ethiopia. 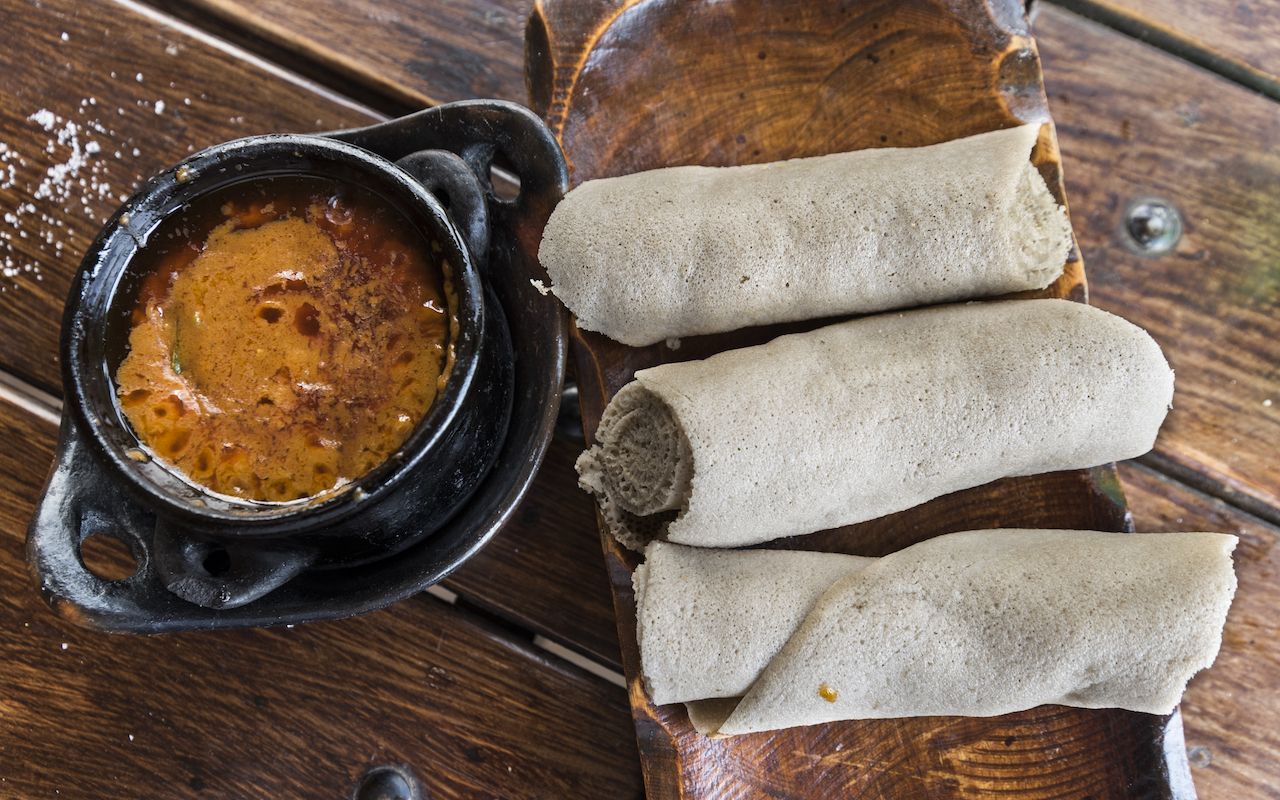 One of the most popular dishes in the country, this red-hued stew is made from a meal ground from broad beans or powdered chickpeas. Garlic, onions, ginger, and various other spices add flavor and depth. Chopped tomatoes and chili peppers give it its rich color. Like many dishes, it’s served alongside injera, and it’s often prepared during Ramadan or Tsom, the period of fasting and abstinence in the Ethiopian Orthodox church. 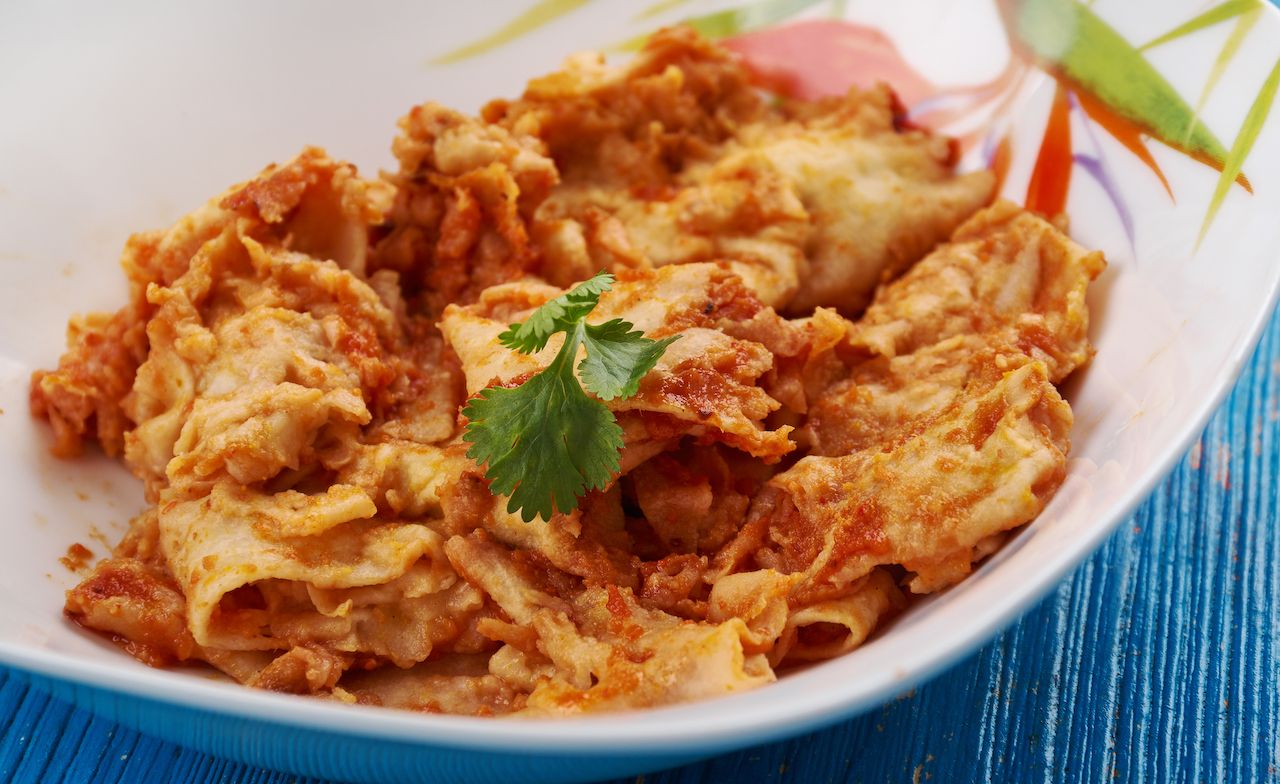 This breakfast dish, sometimes also known as kita fir fir, is made by frying pieces of a flatbread (called kita) in a flour-based batter. The fried bread is then mixed with niter kibbeh, spiced butter, and berbere, a deep red Ethiopian spice blend that combines paprika, coriander, and cumin among other spices. It’s served with honey and coffee or tea. 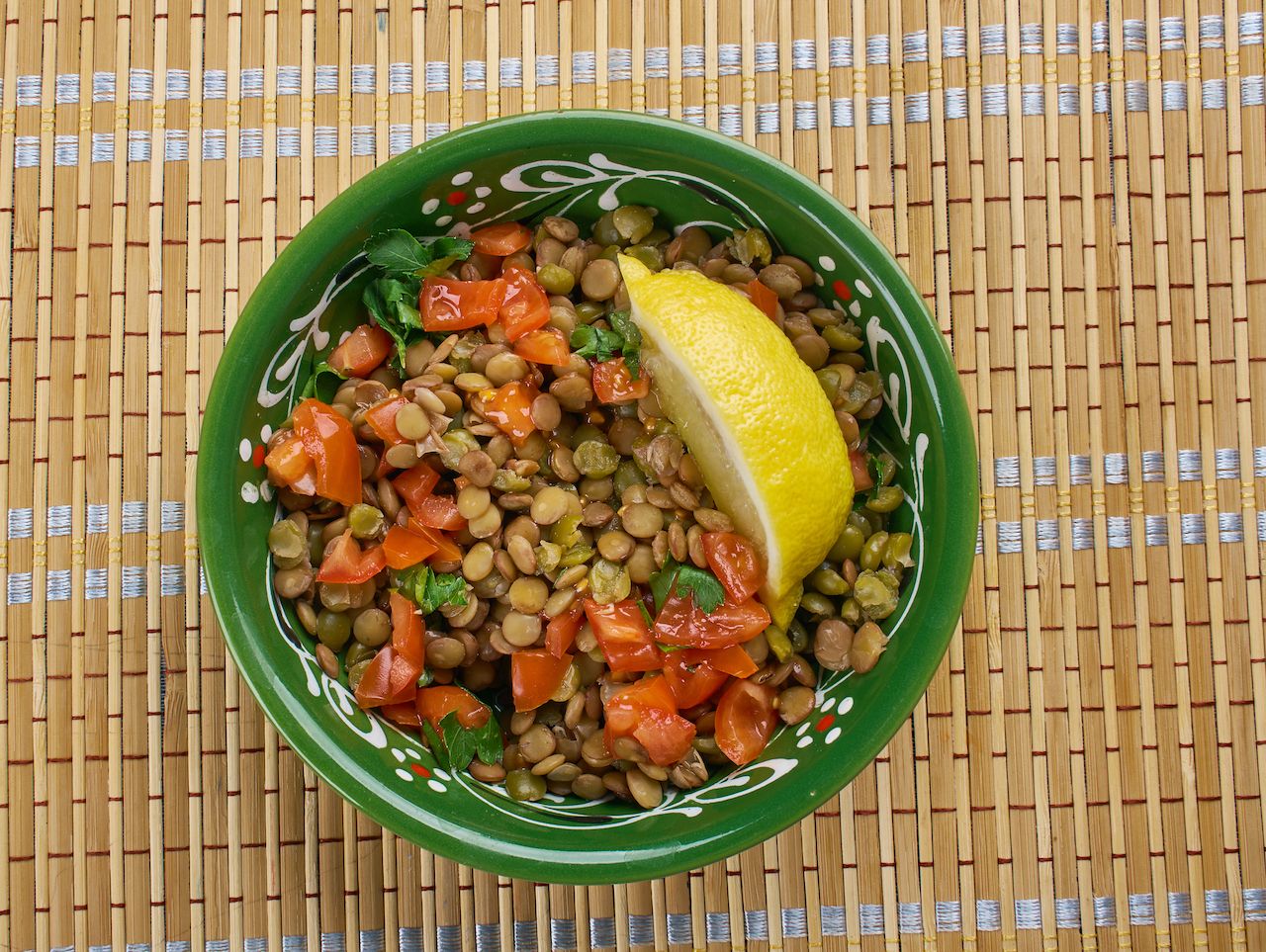 This fresh, cold salad starts with a base of green lentils. The lentils are combined with hot peppers, seasoned with ginger and black pepper, and given a tangy squeeze of lime juice. Azifa is light, easy to make, and a very popular alternative to meat-based dishes during Lent. 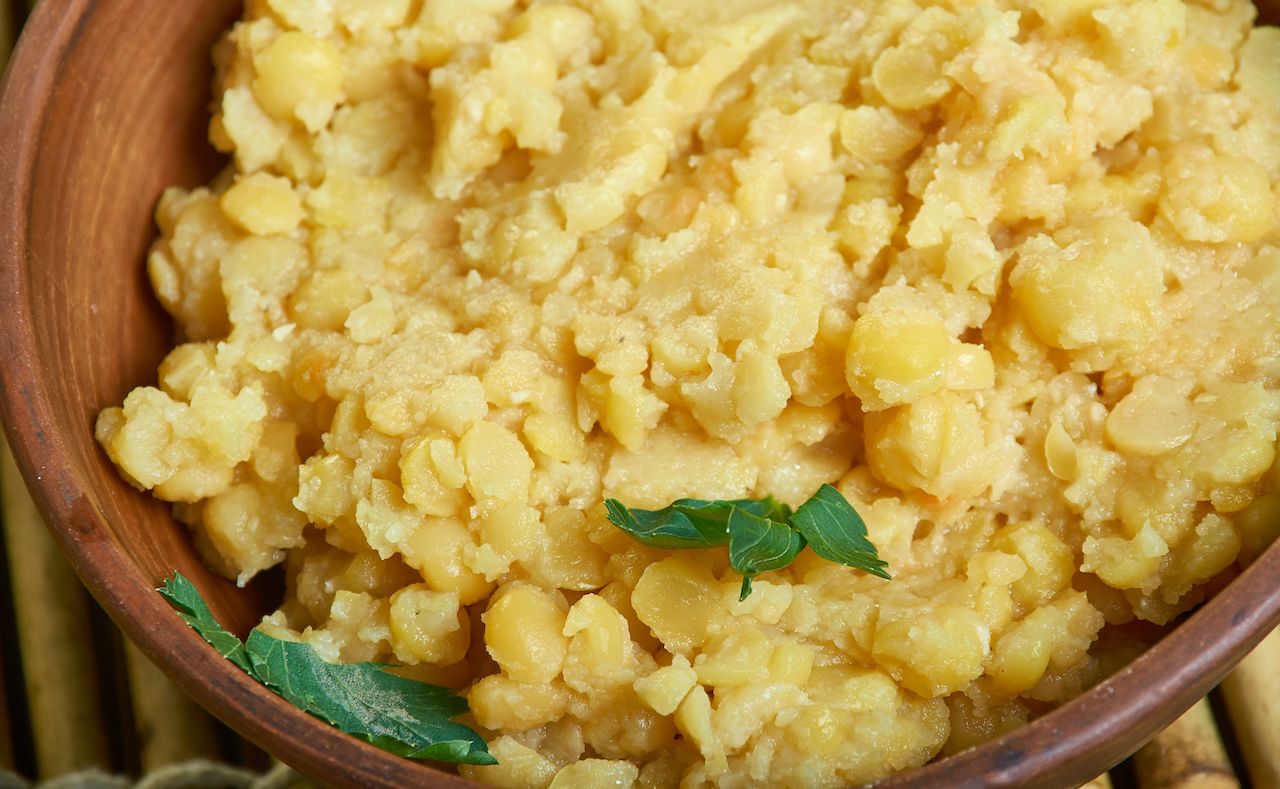 If you’re a fan of mushy peas, you’ll love atir kik alicha. That’s because this creamy Ethiopian split pea stew is made with soft, mushy peas, onions, and garlic, and then seasoned with cumin, turmeric, and coriander. This mild dish is often served over rice or injera. 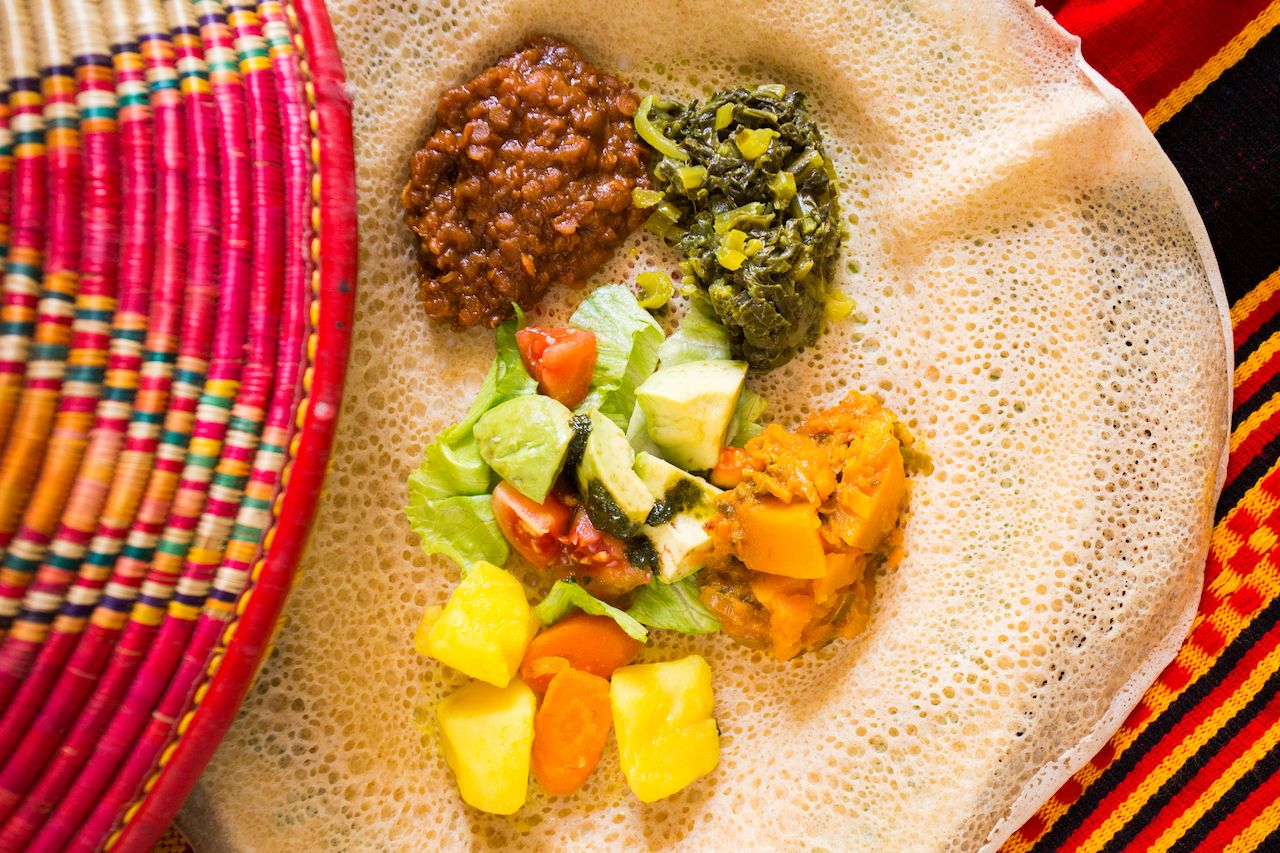 The key ingredient in this dish is collard greens, one of the most widely consumed leafy greens in Ethiopia. Sauteed with niter kibbeh (spiced butter), onions, garlic, and peppers, and spiced with salt and pepper, gomen besiga might be compared to a stir fry. Beef is often added to the mix, but it’s not necessary. 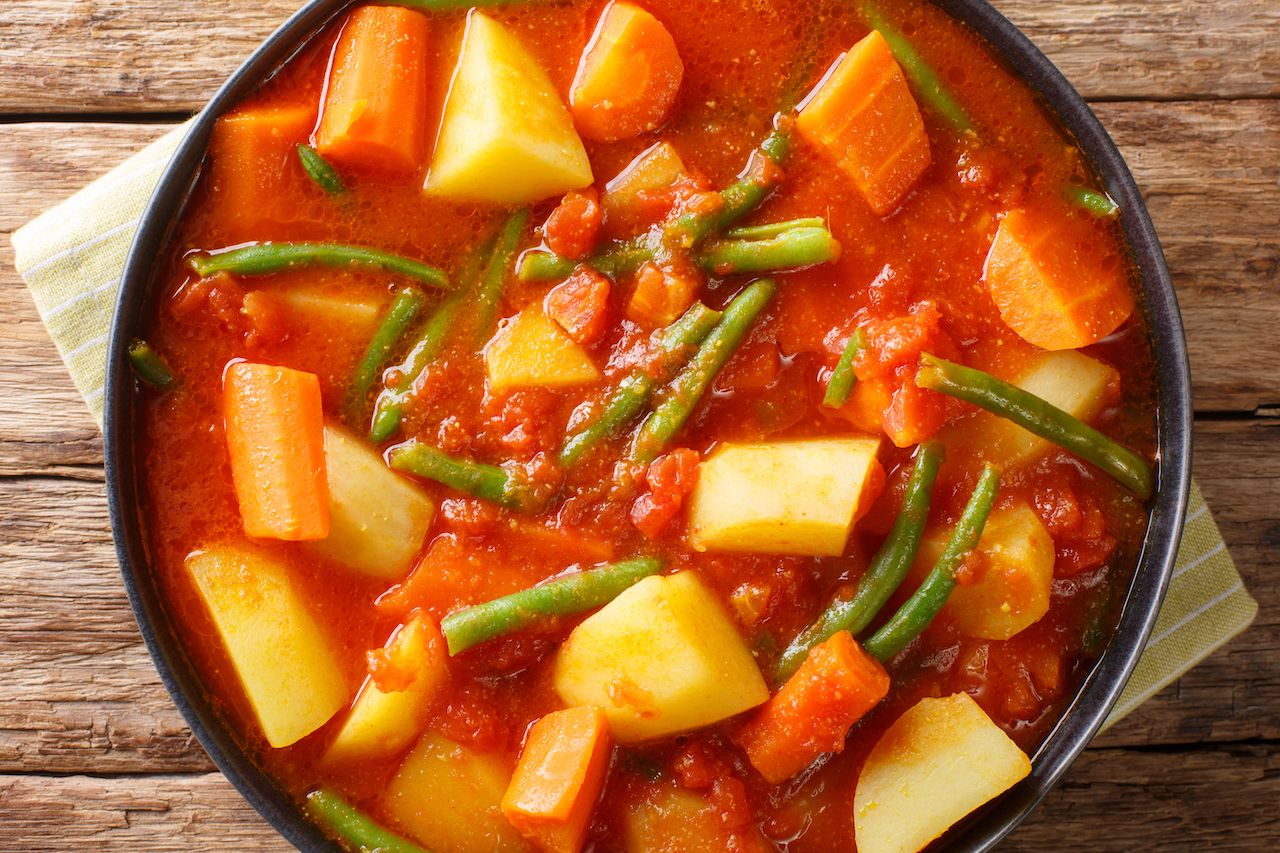 This stir fry dish starts with a base of green beans and carrots. The simple recipe combines these two vegetables, diced garlic, ginger, and onions. Potatoes are sometimes added to create a heartier dish. Another version adds tomatoes and tomato paste, transforming fossolia into a stew. Once the vegetables and spices have been sauteed, they’re slow-simmered until the mixture becomes tender and all the flavors meld together.

Also known as Ethiopian cabbage, tikil gomen is a one-pot vegetarian dish featuring cabbage, potatoes, and onions. Tikil gomen is heavily spiced with a laundry list of seasonings that includes cardamom, coriander, cumin, ginger, cloves, and tumeric, among others. Beloved for its simplicity, tikil gomen is often served alongside injera and other stews.

The term tibs usually refers to chunks of beef or lamb, but in this dish, the meatiness comes from mushrooms, sauteed with berbere spice, mixed with onions, peppers, and tomatoes. It’s often served as a stew with injera, or even as a filling for a sandwich. 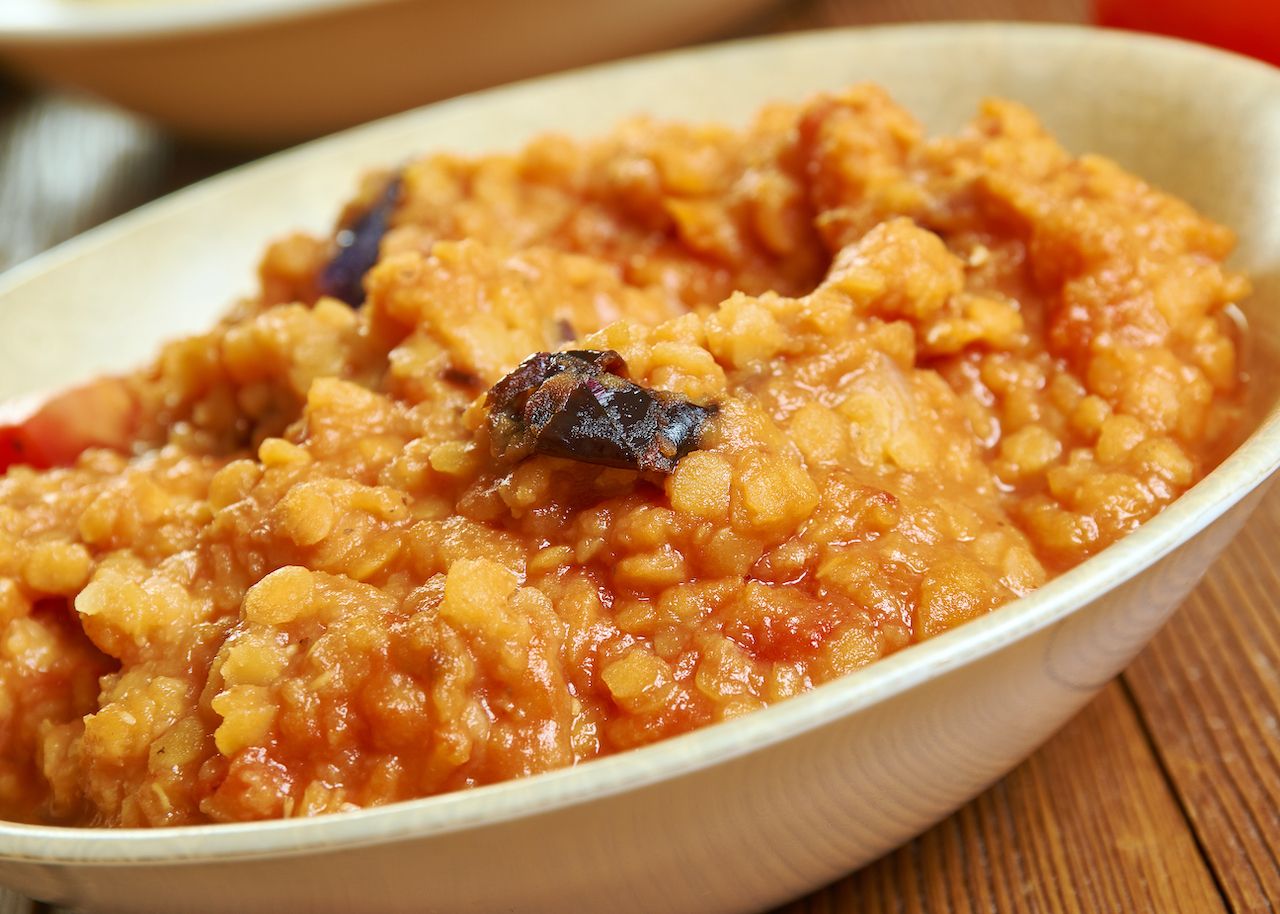 The base of this spicy red lentil stew is berbere. Lentils are one of the most abundant crops in Ethiopia. Onions, garlic, and tomatoes are sauteed in niter kibbeh, then combined with slow-simmered red lentils. The buttery, savory dish is served on injera alongside similar stews. 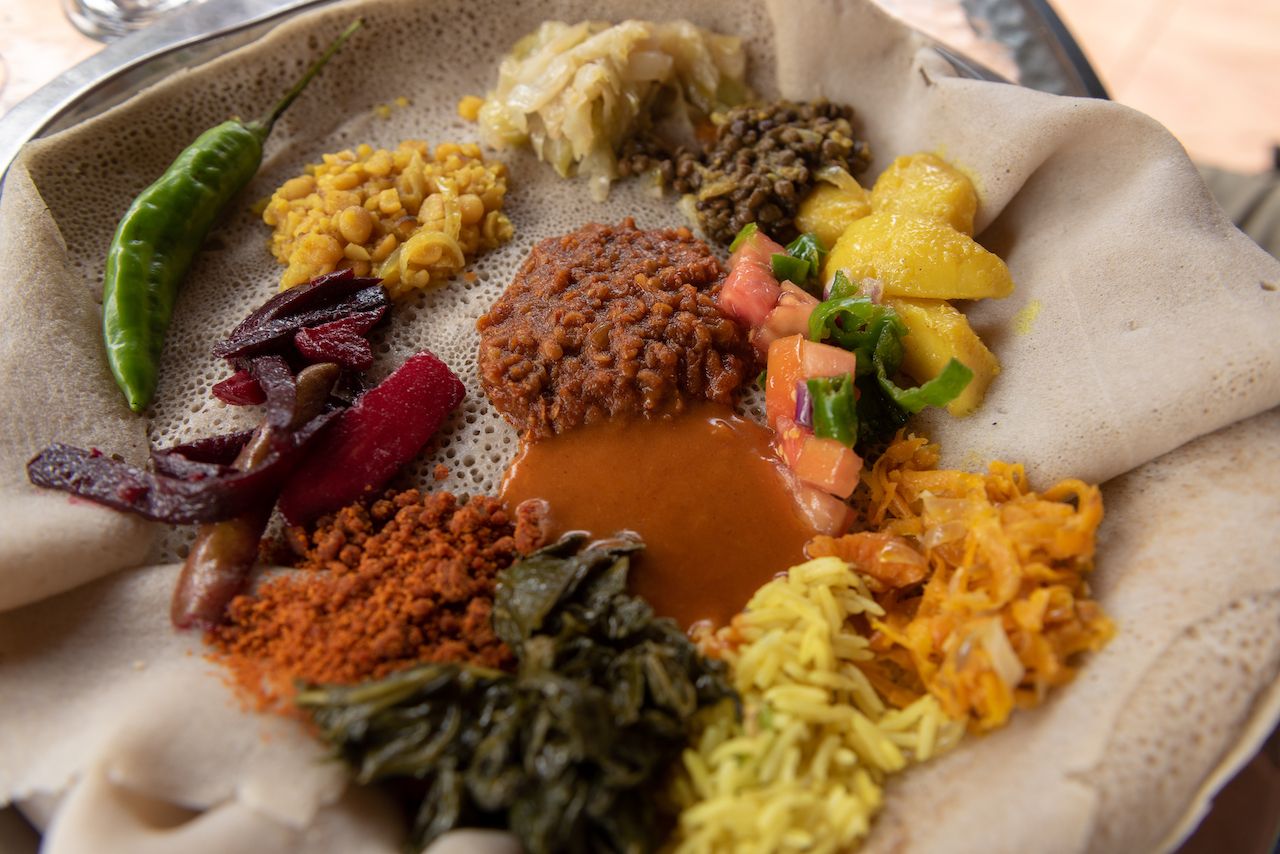 This colorful platter of vegetarian dishes spooned onto a blanket of injera spread on top of a silver platter. It usually consists of dishes like misir wat, shiro, and tikil gomen. The dishes served on the bayenetu platter are always meat-free. It’s the perfect sampling platter to order next time you eat at an Ethiopian restaurant.

National ParksThe Most Breathtaking Geography in Ethiopia
Tagged
Vegetarian Ethiopia
What did you think of this story?
Meh
Good
Awesome

The Most Breathtaking Geography in Ethiopia

First Person Dispatch: I Want To Be a Poor Doctor, Like Dr. Abeba