The stone piazza in Urbisaglia, in the Marche region of central Italy, is like many in the country’s medieval villages. School kids play soccer under the shadow of a 16th-century tower, their abandoned book bags strewn on the church steps. Two older men sit on a bench and talk politics. A woman crosses the piazza, heading home with groceries in-hand. The clothing store shopkeeper steps outside to smoke a cigarette as a pair of travelers watch Italian life unfold, relaxing over aperitivi and snacks on a cafe patio. The difference between here and Rome or the Amalfi Coast is that they are the only tourists around.

Shaped like a big apostrophe, Le Marche, or Marche as it’s commonly known, is northeast of Rome in a shallow curve that juts into the Adriatic Sea. The Apennine Mountains mark the west of the region, with rivers flowing from the mountains through midland hills to the sea. The northernmost river delineates the border with Emilia Romagna, the southernmost with Abruzzo. The name means “the borderlands” in Italian, and geographically defined borders have kept this region all but a secret for centuries.

Most of the few visitors the area receives mispronounce its name, which flows off the Italian tongue as “Lay Markay.” Much of the region is covered in open countryside just a 30-minute drive from both mountains and the sea, surrounded by medieval hilltop towns, patchwork fields, grapevines, olive trees, and sunflowers. On your next Italian trip, come here and stay in a B&B or rent a vacation home for a week. There’s no better place to feel like a local.

Stay in Urbisaglia and explore the region’s ancient archaeology. 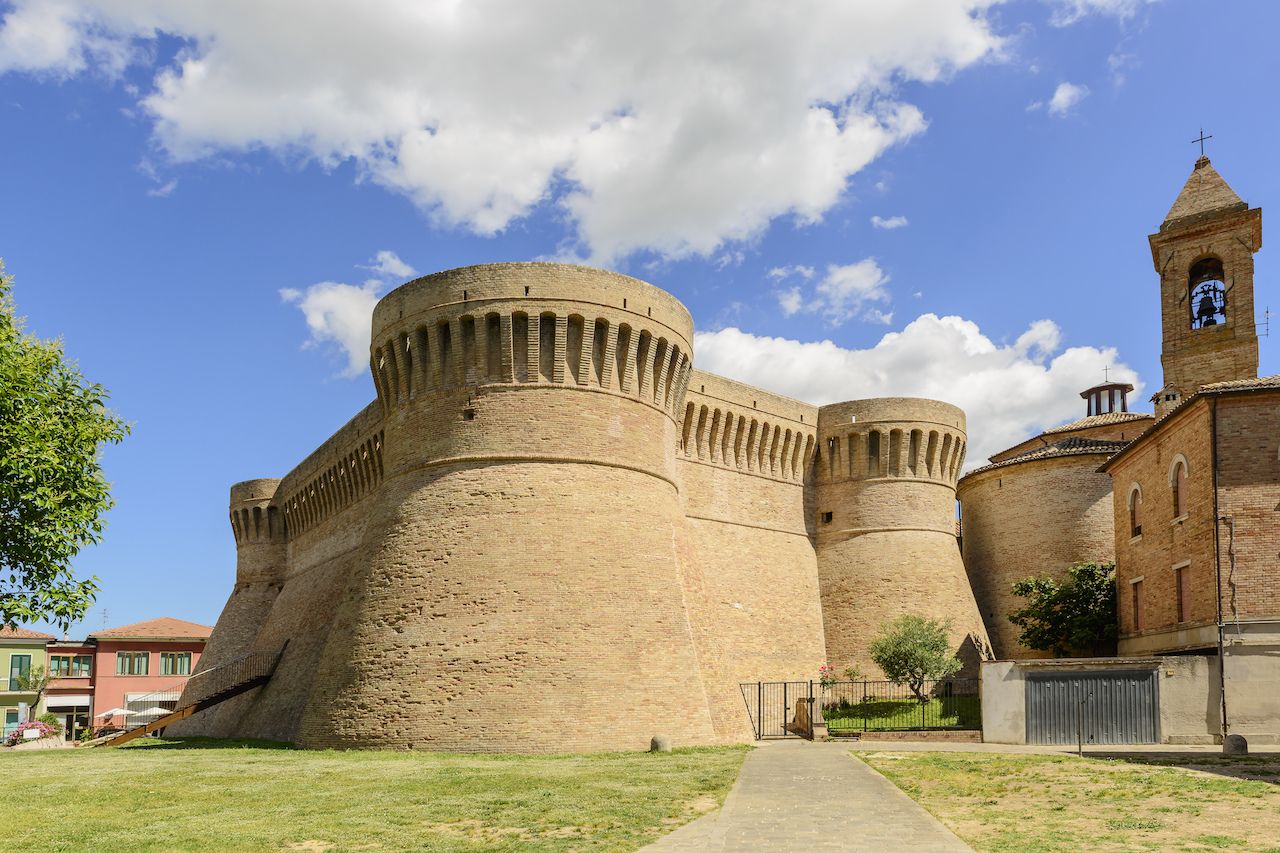 Urbisaglia is a fortified city on a hill in the Macerata province, with walls built from stones taken from the ruins of the ancient Roman settlement Urbs Salvia. Though the original settlement was destroyed by the Goths in 409 AD, the ruins are preserved in a landslide below the town in a 100-acre archeological park. A temple and the 5,000-seat amphitheater are visible as you drive by on Highway 78. Excavated statues and carvings are displayed at the Municipal Archeological Museum in Urbisaglia’s historic center. If you visit during the summer, the amphitheater hosts regular performances and plays often preceded by an outdoor dinner — a great opportunity to mingle with local residents and other visitors and get a feel for the area’s artistic chops.

Le Marche’s 112-mile long Adriatic coastline has 29 Blue Flag beaches, recognized for clean water and environmental quality. Clifftop medieval villages with postcard views overlook the sandy coast and occasional rocky inlets, and you can explore both the beaches and villages on foot. You may pass by local men playing bocce in the shady park that separates the beach from the road, but even during the height of Italy’s tourist season in July and August, there’s always a spot for your beach towel.

Take part in weekly festivals held from spring to fall. 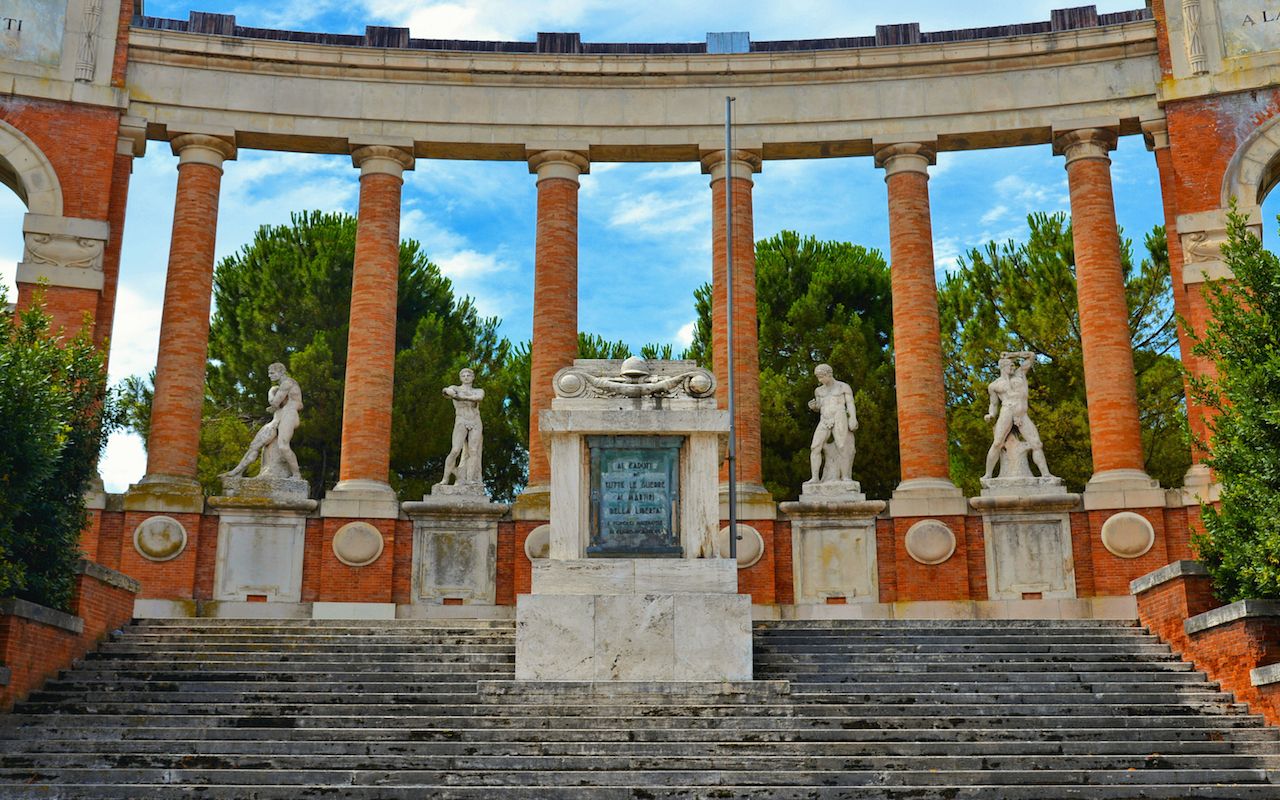 Three earthquakes struck southwest Le Marche in 2016. San Ginesio, a walled city known as a borghi più belli, one of the most beautiful villages in Italy, suffered immense damages. Renovations are underway, but the indomitable spirit of the residents went uninterrupted. San Ginesio continues to host an annual horse race called a palio that is part of La Medievalia, among the more popular draws to the area. Held in the days leading up to the August 15 holiday, the festivities start with a battle reenactment and include jousting competitions, dances, performances, and a communal dinner in the old-town style for attendees. You’ll be served recipes dating back to the 1300s, celebrating the 1377 victory of local residents over attackers from the town of Fermo.

Also worth a visit on your Macerata visit is an elliptically shaped arena known as the Sferisterio, built in the 1820s for local circuses, bullfights, and other competitions. The arena has space for 7,000 spectators, who nowadays watch headlining musical acts perform outdoor concerts. The facility also hosts the massive Macerata Opera Festival each summer. After weekend opera shows, organizers clear space for themed parties, concerts, and dancing under the stars until the wee hours. This is among the most traditional, old-Italy experiences in which you can actually take part as a visitor. 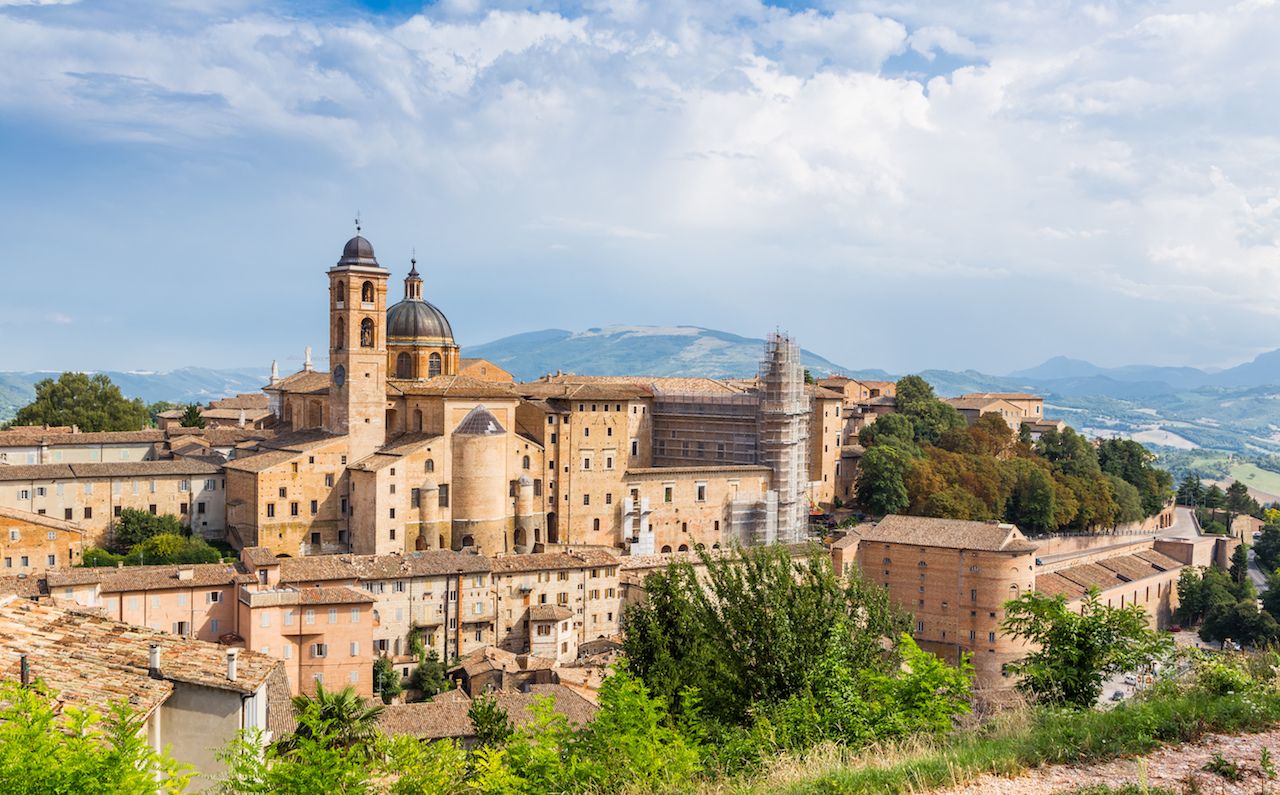 The historic city center of Urbino, a small town in the heart of La Marche, was awarded UNESCO World Heritage status for its well-preserved Renaissance character. In the 15th century, Duke Frederico da Montefeltro, a famous soldier and art patron, brought notable artists and architects to Urbino to build his Palazzo Ducale, “a city in the form of a palace.” The Ducal Palace, with its narrow twin towers, was designed to face Florence and is where you can admire artworks by notable artists such as Raphael (who was born in Urbino), Piero della Francesca, van Ghent, and Titian.

Drink award-winning wines you can actually afford to buy. 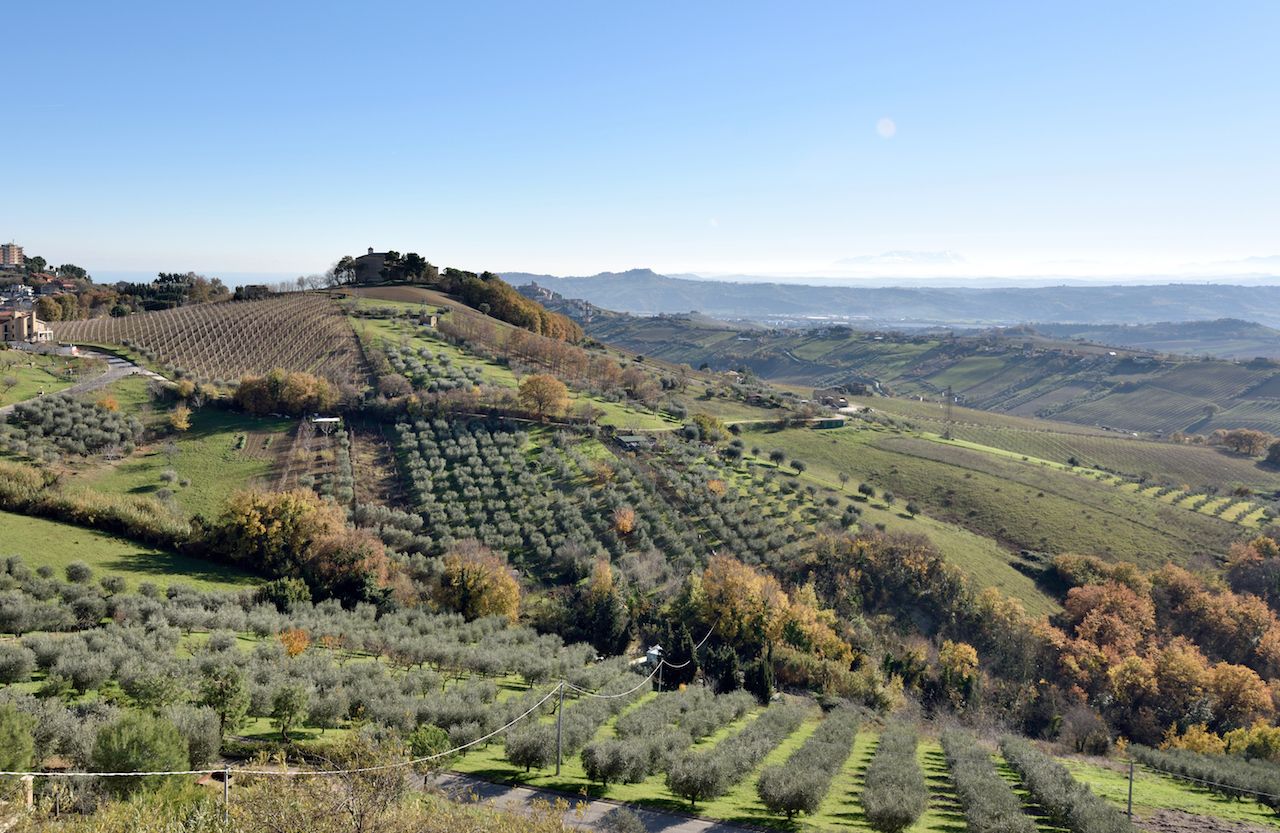 Le Marche’s climate and soil are ideal for winemaking, and the region produces notable yet reasonably priced wines. The region is known for a white grape called verdicchio, the base for many a highly praised wine from the area made with the same grape. It grows in two different regions: Jesi, influenced by the sea, and Matelica, in a mountain valley. Winemakers offer free tastings and private tours, most likely given by an owner. Be sure to try a glass of both Castelli di Jesi Verdicchio Riserva DOCG and Verdicchio di Matelica Riserva DOCG and taste the difference between the two areas.

If you’re a red wine drinker, Marche has at least a few bottles with your name on it. Vernaccia di Serrapetrona is made in a 163-acre region in Serrapetrona, and the same grape makes three distinct wine styles: a dry red perfect with grilled meat, a unique dry sparkling red that is excellent with pork, and a sweet sparkling red that’s best with dessert. You can try all three at Alberto Quacquarini’s tasting room. If you call ahead, they’ll show you how it’s done in their cantina. 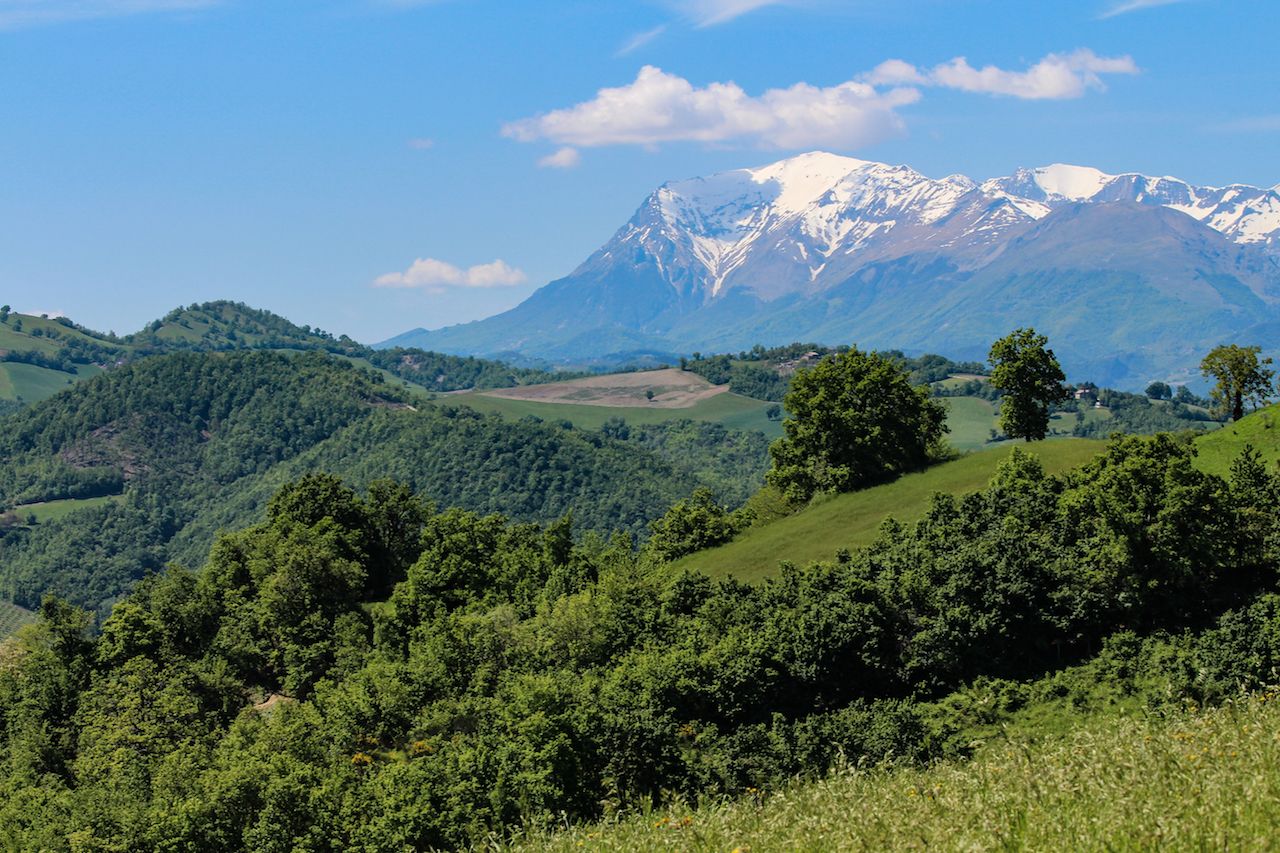 Travelers have sought out the Sibillini Mountains for centuries. The region’s southwestern border was long known as a land of fairies, mystics, and the eponymous prophetess Sibyl, who lived in a cave near the summit of Mount Sibilla. These same enchanting mountains now encompass the 270-square-mile Monti Sibillini National Park in which medieval villages and a network of shelters provide hospitality to hikers trekking the nine-day-long “Great Ring,” a 77-mile path that encircles the park. Be sure to pack and prepare properly if you plan to tackle part or all of this trek.

Wildflowers abound here in the summer, which is also peak time for bird watching, hiking, and biking the many trails. Winter brings skiing, sledding, and snowshoeing, after which you can warm up in one of the many restaurants serving hearty local cuisine. Guided full-moon evening hikes and stargazing events are offered year-round if you prefer to have an experienced local leading the way.

Eat and truly feel like you’re part of the family. 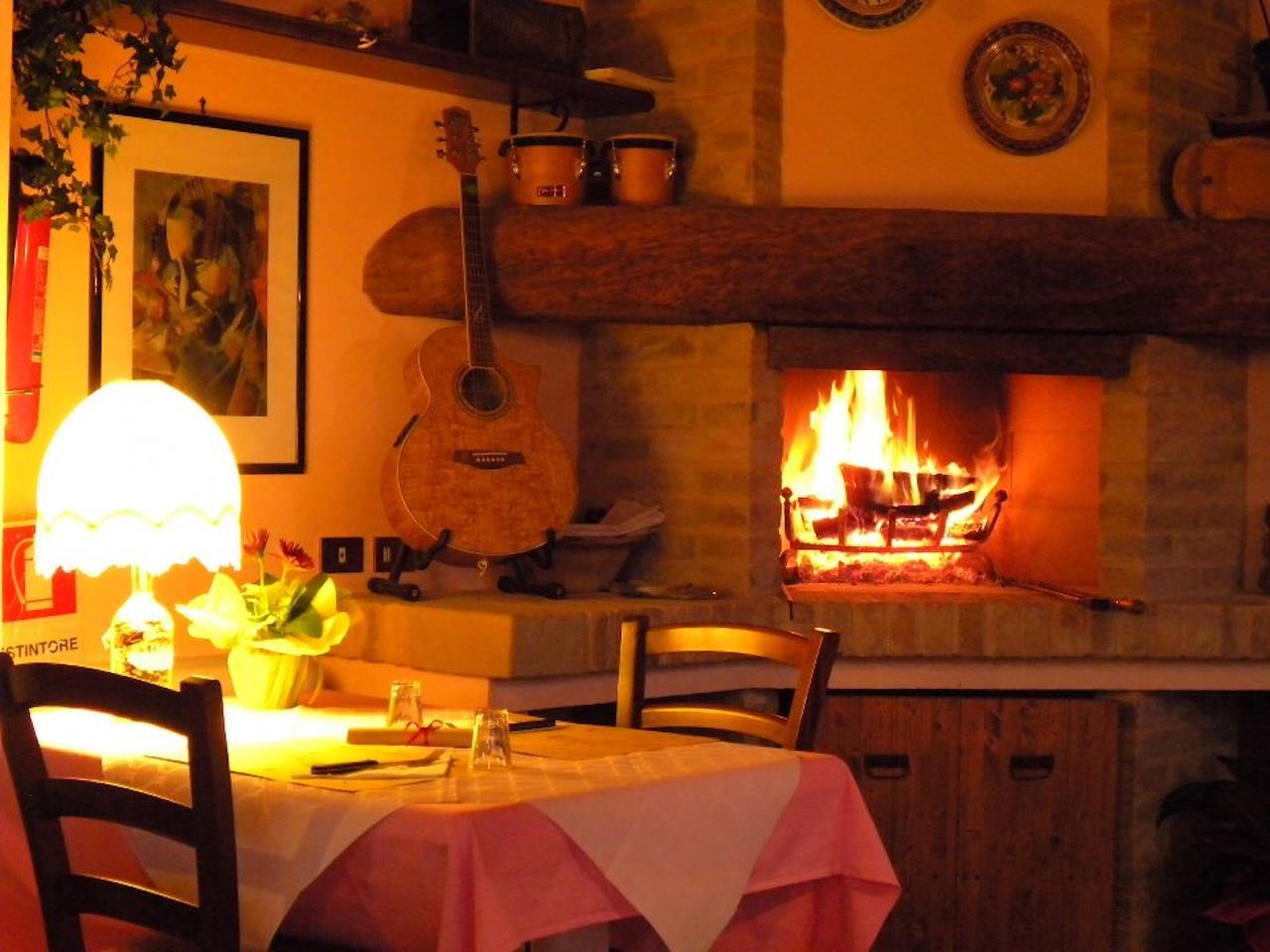 After exploring the high country, a restaurant you absolutely must try is Osteria Scherzi a Parte, a longtime local favorite near the medieval mountain town of Sarnano. The place is the perfect stop after exploring the national park, where you’ll be greeted not only by the owner Gabriele at the door but by other diners as you sit down to a meal. Gabriele may just sit with you and tell you what his wife Tiziana is cooking in the kitchen that day. In true Italian style, your best bet is to let him do the ordering for you and not try to interfere. Just be sure to add a half-liter of the house wine, which costs only a few euros. Gabriele will pour a small glass for himself and ask everyone in the room to join him in making an international toast to guests visiting from other countries. You may not be the only international travelers there, but you’ll feel like family.