To drive onto the grounds of Chatsworth House, in Derbyshire, England, at the edge of the Peak District, is to be transported. You leave present-day England the moment the tires hit the pavement driveway leading to the house, and enter an idyllic 18th-century oil painting of the English countryside. Fluffy sheep dot the emerald green hillsides and roam freely along the roadside like placid little clouds. The River Derwent runs through the foothills of the property, its current drifting under a stone bridge. In the distance, the house itself takes shape, a vision of classical elegance and extravagance. Tucked away in the upper left corner of the grounds, in the hills above the house, is the Kitchen Garden, a sprawling 3-acre garden where the estate grows fruit, flowers, herbs, vegetables, and leafy salad greens.

Chatsworth House is a magnificent testament to the wealth and status of the British aristocracy. Formidable 16th-century noblewoman Bess of Hardwick built the house in 1553. Bess convinced her second husband, William Cavendish, to sell all his property and buy the Chatsworth estate, and then became one of the wealthiest women in England and a friend to Queen Elizabeth I after Bess’ third husband was (probably) poisoned by his brother. Chatsworth is still the seat of the Duke of Devonshire, and is currently the home of Peregrine Cavendish and his family. 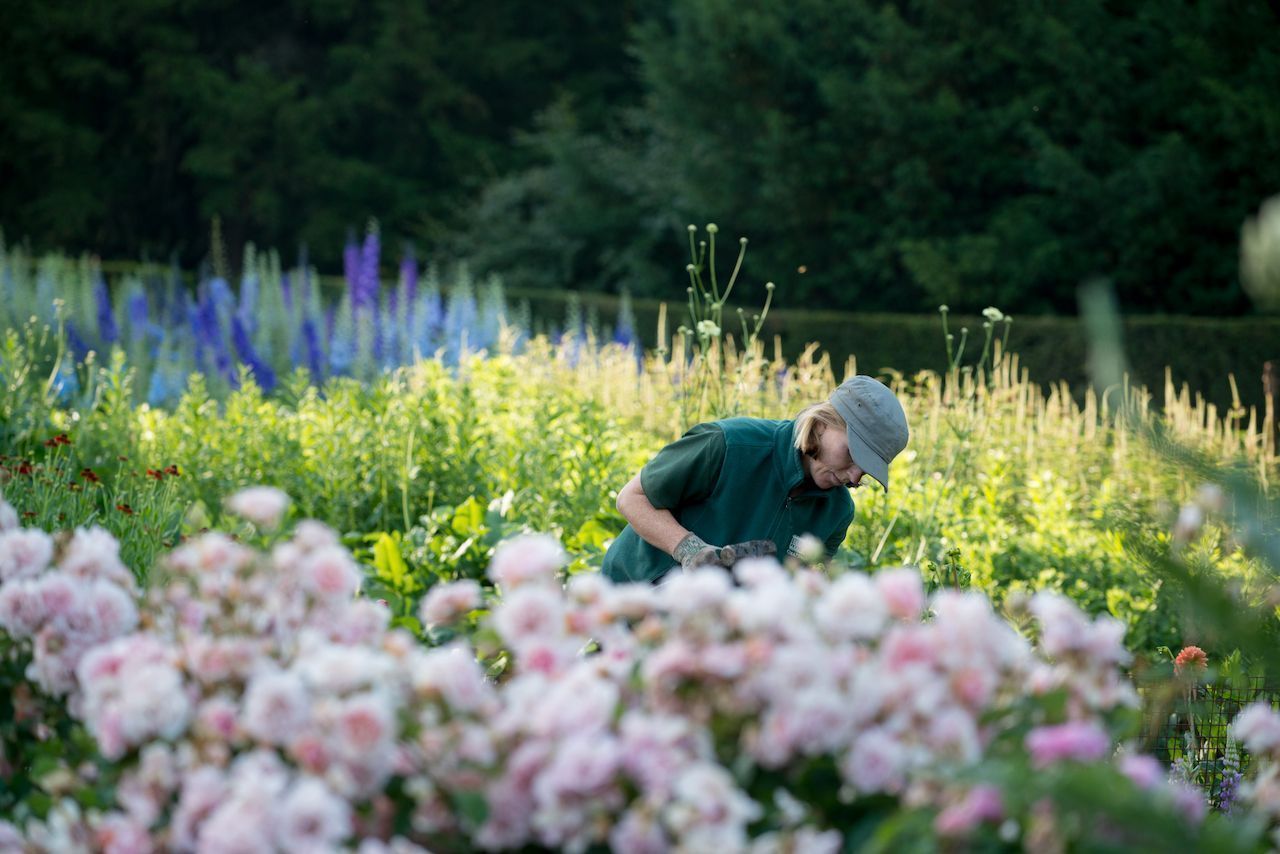 The 35,000-acre estate is a pastoral paradise. The grounds include a waterfall, two ponds, a maze, a rock garden, greenhouses, and the stunning Cascade fountain, which revelers bathe in during the summer. The Kitchen Garden, however, is one of the estate’s highlights. Perhaps less glamorous than the home’s ornate bedrooms and marble statue gallery, in the spring the Kitchen Garden blooms into a collage of herbaceous scents and a full spectrum of color from lavenders and magentas to deep greens and purples. 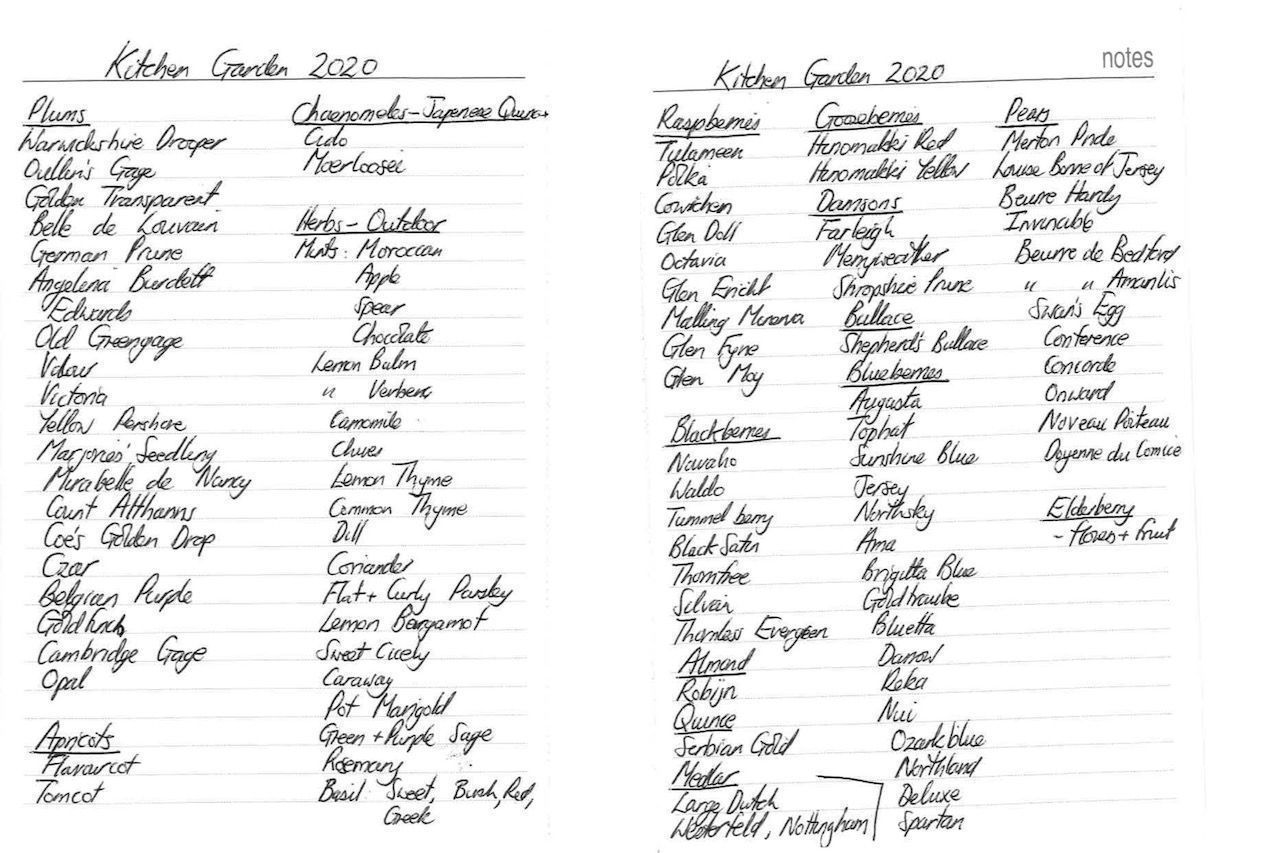 Three full-time gardeners care for the vast collection of plants that are grown in the many beds around the garden. Head gardener, Stefan, says the Kitchen Garden is “roughly split into the cutting garden, fruit and herbs, and salads and vegetables.”

According to an exhaustive handwritten list compiled by Stefan and his fellow gardeners Sophie and Glenn, the Kitchen Garden grows 16 different varieties of blueberry and 10 varieties of tomatoes, as well as strawberries, raspberries, gooseberries, figs, pears, apricots, and plums. Mint, chives, thyme, dill, caraway, chamomile, and rosemary are among its herb collection. Cucumbers, onions, radishes, brussel sprouts, eggplant, beets, celery, chard, and watercress cover just the beginning of the plants grown in the vegetable garden. A mini orchard at the back of the garden grows nearly 40 different apple varieties.

A brief history of the Kitchen Garden 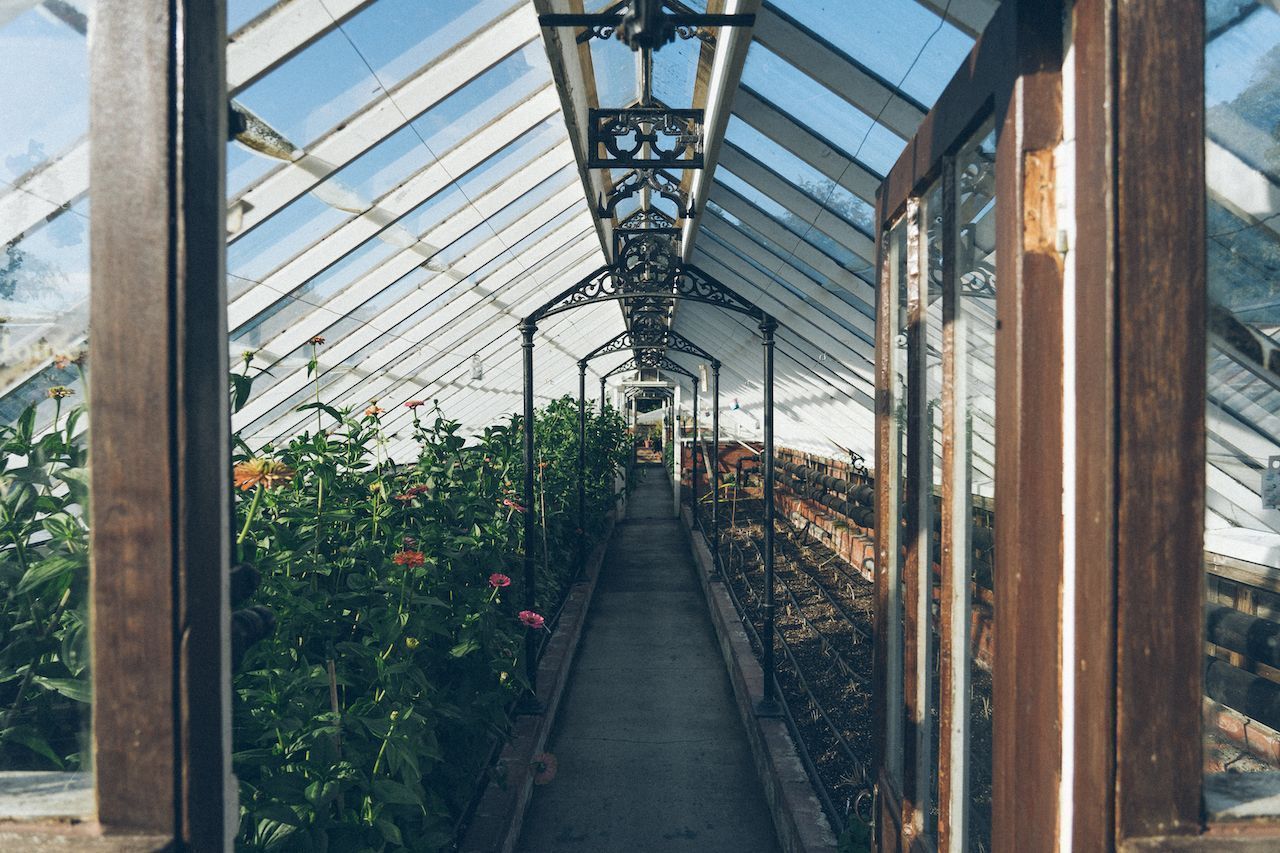 Deborah Cavendish, one of the infamous socialite Mitford sisters and known as Debo to her friends, is responsible for cultivating the modern Kitchen Garden in the late ‘80s. But 500 years before her intervention, gardens growing food for the Cavendish family existed all over the estate. Stefan explains that the first Duke likely established “productive gardens” around 1549. In the mid-1700s the third Duke built walled gardens, versions of which were used all the way up until the 1900s, when a lack of resources, likely due to the onset of two World Wars, forced the estate to abandon its upkeep.

Forty four years after the end of World War II, Debo ordered the restoration of the glasshouse and the construction of paths and raised beds in the area where the garden exists today. Over the course of three winters, the estate built up the Kitchen Garden until it opened to the public in the early ‘90s. 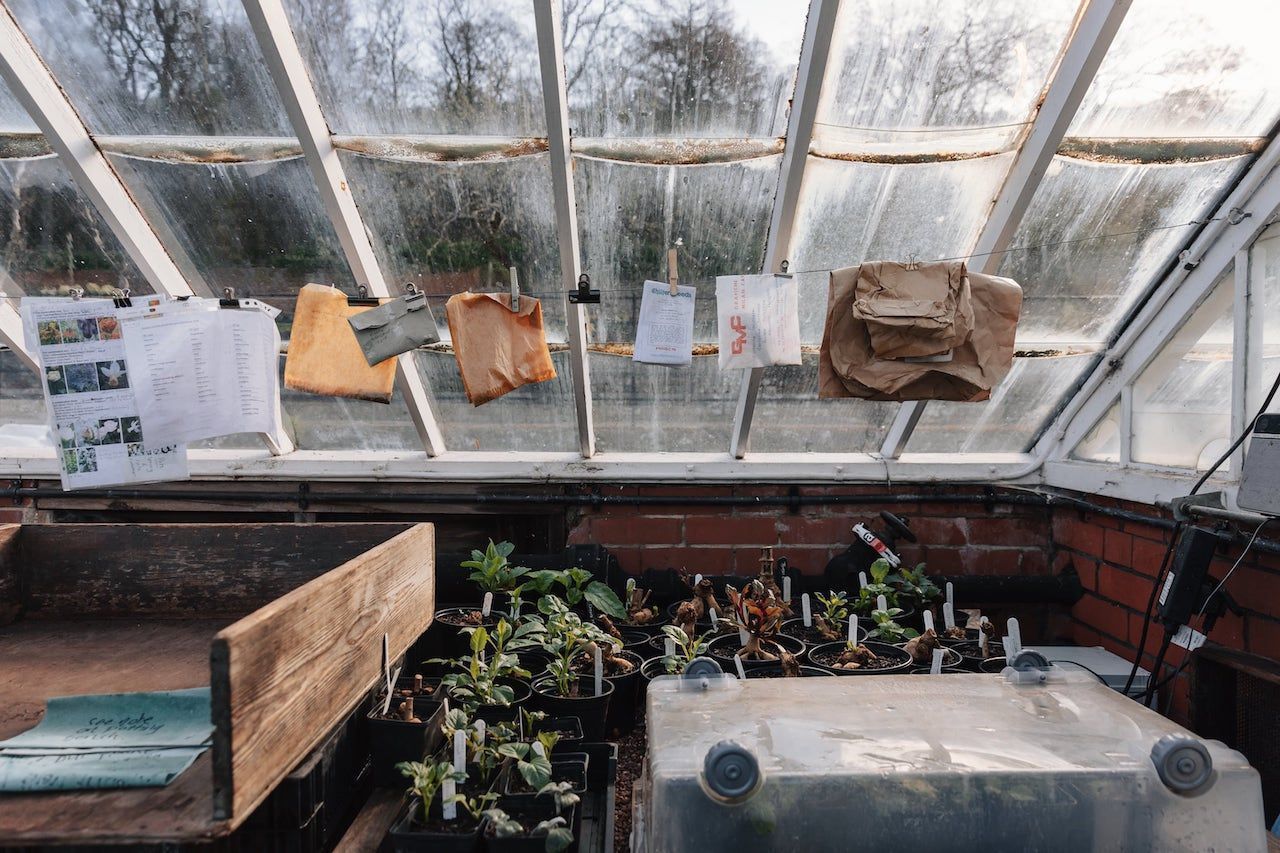 “The 11th Duchess was a keen gardener, wanting to showcase all areas of horticulture and as self-sustaining as possible,” Stefan says of Deborah Cavendish. “She transformed an underutilized area beyond the stables onto today’s kitchen garden, utilizing existing glasshouses she laid out the structure and planted a wide and diverse range of crops.”

The crops grown in the Kitchen Garden are primarily used for the Cavendish family, who pay for the garden’s produce through a charity set up to maintain the Chatsworth estate. Any excess food not used in private kitchens at Chatsworth is sold at the estate’s public farm shop or is used in its restaurants. Any leftover waste is fed to the estate’s pigs.

Many historic estates in the Peak District, from Renishaw Hall to Heath House, support their own working kitchen gardens, but Stefan says it’s the scope of the Chatsworth produce garden that sets it apart. The Kitchen Garden grows some produce that is rarely seen in other parts of England, like the Passiflora edulis — passion fruit — as well as six different types of melons.

When to visit the Kitchen Garden 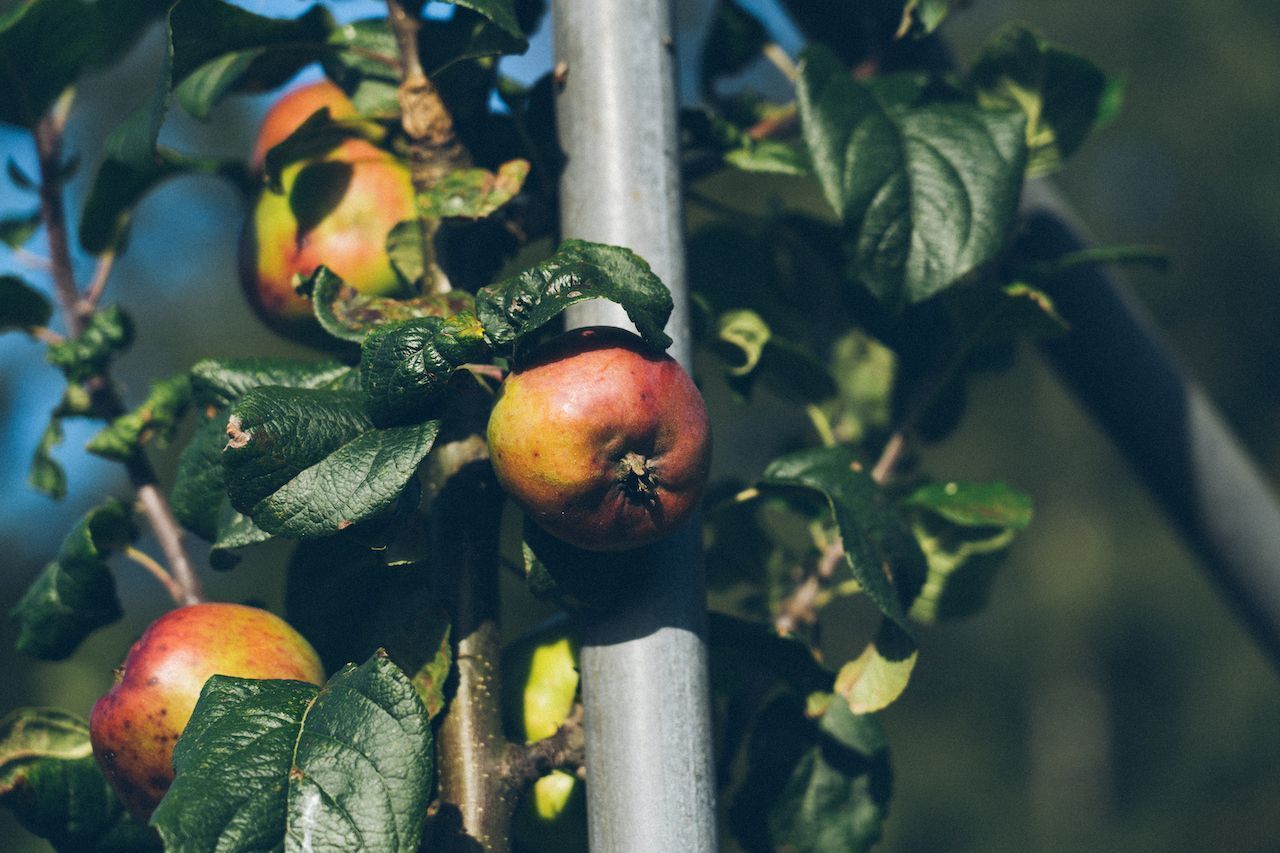 Stefan says that the Kitchen Garden is productive year-round. When I visited the Kitchen Garden in October of 2019, a kaleidoscope of green hues had flooded the garden: Emerald bouquets of kale and cabbage with leaves like silk fans looked ready for harvest. Nearby, bunches of neon green parsley, mint, and basil sprouted from the ground in neat rows. The air smelled fresh and herbal and, even on the overcast day, sunlight lit up the gravel pathways between the raised beds. You’re likely to experience at least some of the abundance of the garden whenever you visit.

However, if you want to see a bounty of flowers, from lilies and snapdragons to tulips and Icelandic poppies, gardener Sophie says the best time to visit the gardens is from May to August, while most vegetables sprout in July and August.

Chatsworth House is one the most majestic sites in the Peak District, and the Kitchen Garden is just one small section of an estate that is full of ostentatious furniture, gilded architecture, paintings of prized hunting dogs, and an overall atmosphere of a once powerful and influential aristocracy that has mostly faded into legend in our modern world. It’s worth visiting for a peek into the private life of an elite family alone. The Kitchen Garden is different: It’s a simple, beautiful tribute to nature, just like much of the surrounding Peak District National Park. Built and cultivated by hand, the Kitchen Garden pays homage to England’s bountiful countryside and stunning natural landscape. The only thing that’s missing from the garden is the chance to sample its produce straight from the ground.