For many, a beautiful golf course is the last thing they need to improve their golf game. It’s enough trouble remembering to keep your head down, left elbow in, and knees bent without also being distracted by all the incredible scenery around you. Whether your golf game is Tiger status or leaves something to be desired, we don’t think you’ll mind the “distractions” on these courses. From the stark opal fields of the Australian Outback to the icy hazards of Greenland’s Ummannaq, these courses might not help your handicap, but they’ll certainly be a memorable day on the links. These are the most scenic golf courses in the world. 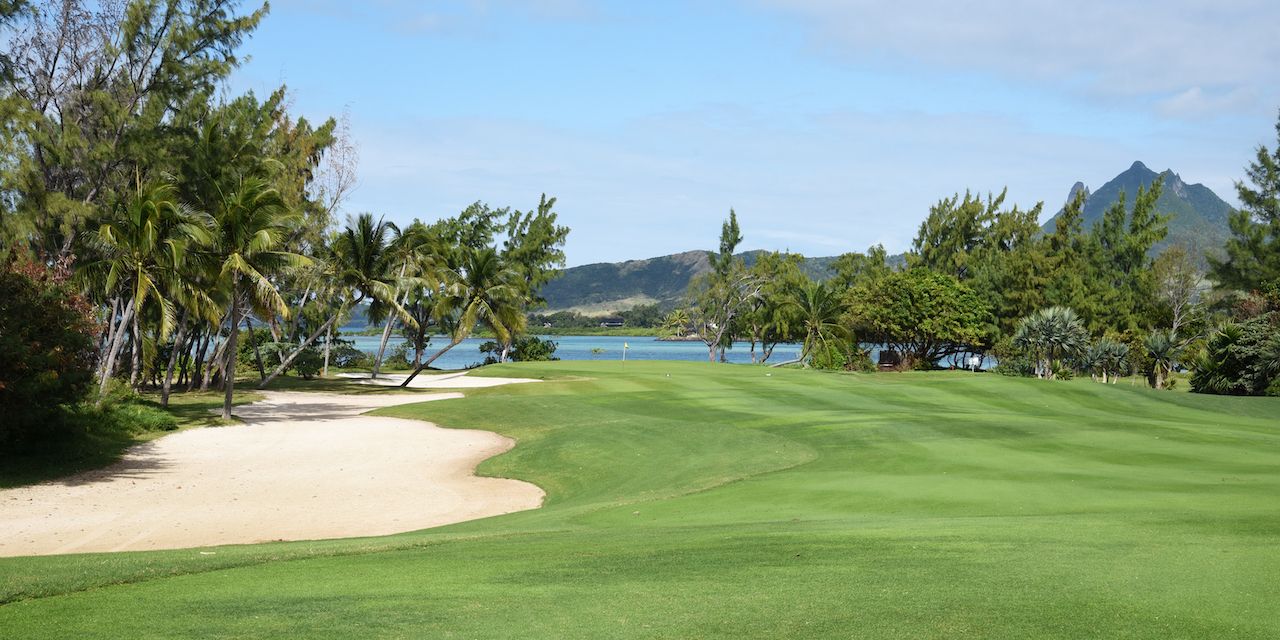 Pretty much everything about the island of Mauritius is visually stunning, and Le Touessrok Golf Course is no exception. This 19-hole course on the east coast of Mauritius can only be reached by a golf boat shuttle from its private jetty or by scenic helicopter ride. The course lies on the beautiful Ile aux Cerfs, and its holes sit alongside the island’s preserved tropical flora and fauna. As you play, you’ll find yourself moving among the island’s unique topography, including volcanic rock outcroppings, lakes, and gullies. All holes have ocean views. Unsurprisingly, it’s been recognized as the top course in the world to play at least once in your lifetime by Golf World magazine. 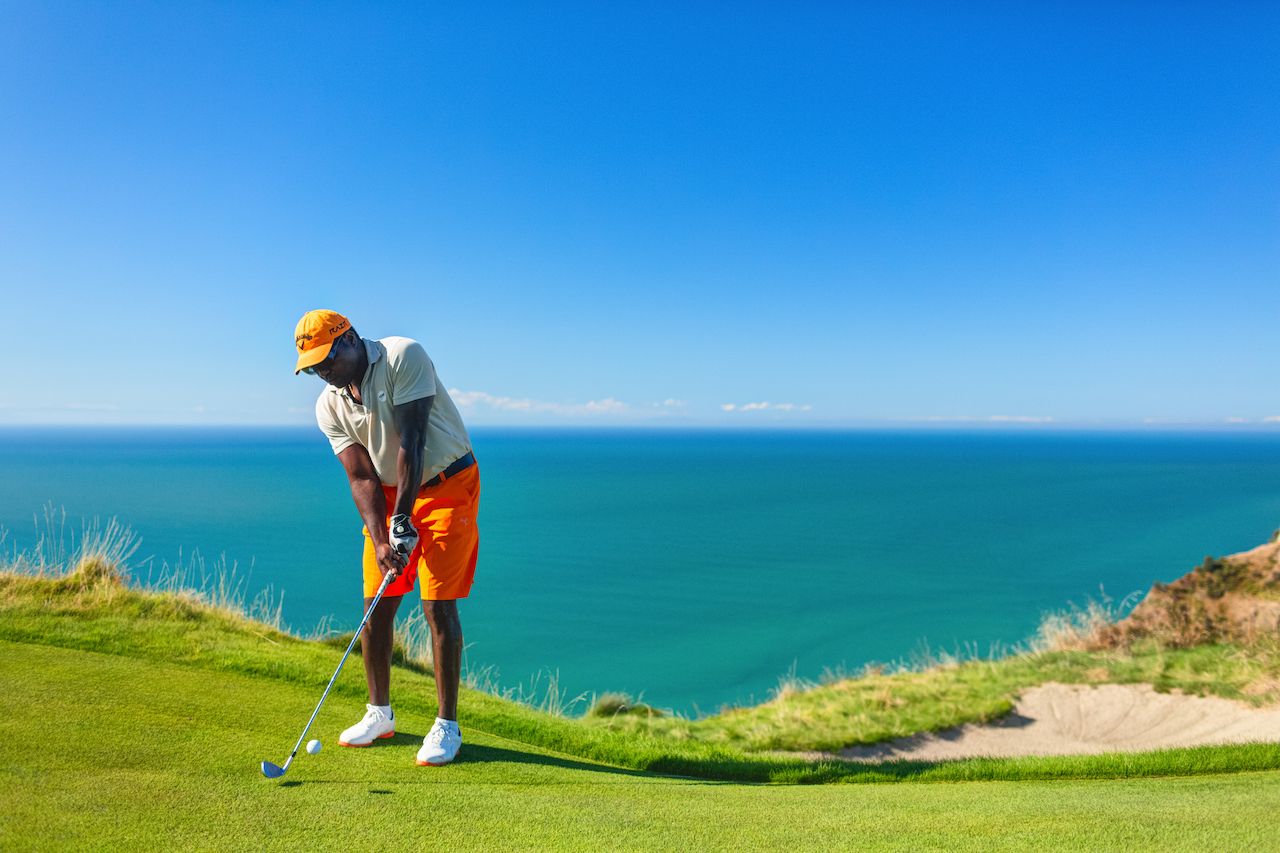 Don’t worry, this course does not live up to its name. You won’t have to be kidnapped and dragged here to give this place a try. It’s scenic enough to be the centerpiece of a special trip to New Zealand. Located in Hawke’s Bay on the North Island — New Zealand’s wine country — Cape Kidnappers Golf Course is built on a ridge-and-valley landscape and has sweeping views of the ocean from atop dramatic cliffs. Host of the PGA Tour’s Kiwi Challenge in 2008 and 2009, Cape Kidnappers has fairways perched 460 feet above the sea, holes with views of the sea, and deep ravines that present more of a hazard than a typical sandtrap. 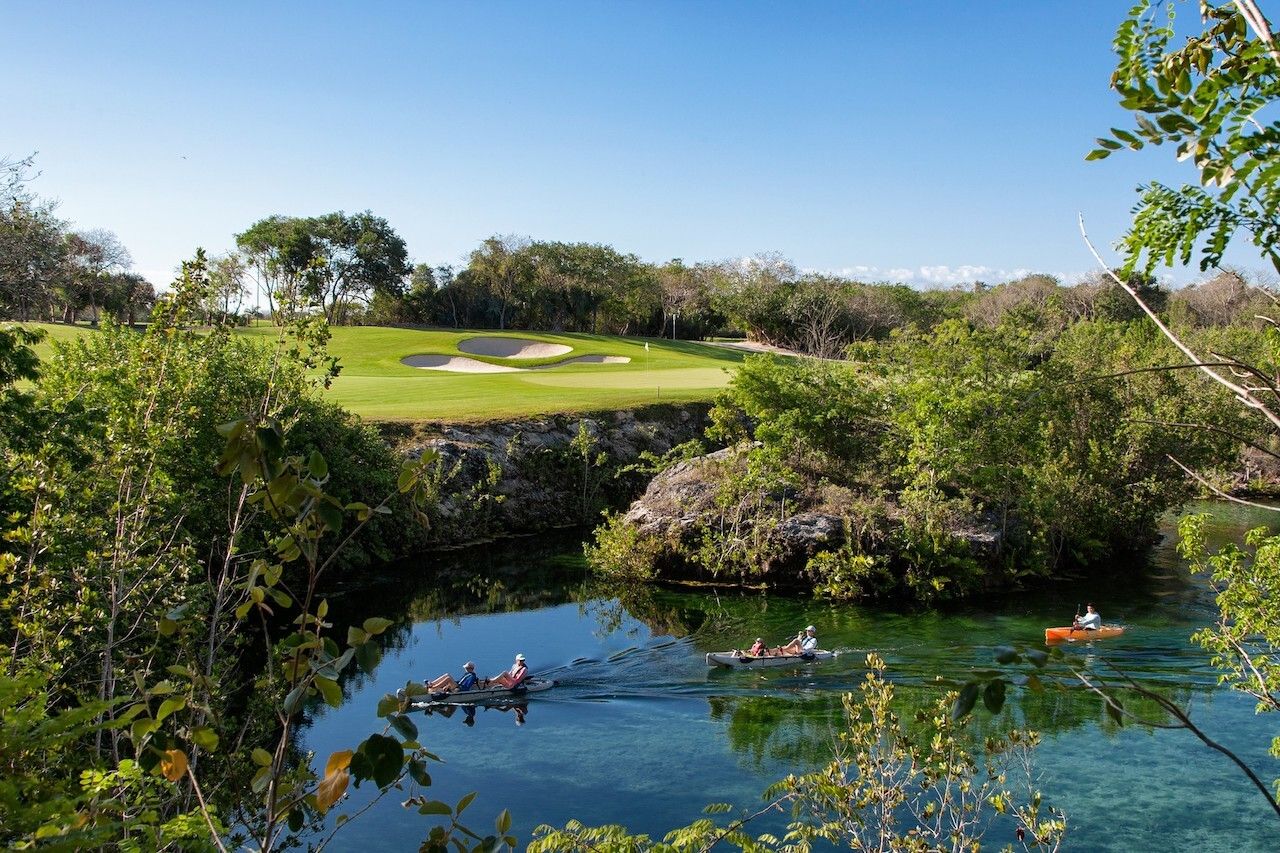 El Camaleón at the Fairmont Mayakoba is one of the most otherworldly golf courses in North America. This course in Mexico certainly lives up to its name, taking on many forms and spanning a variety of incredibly diverse ecosystems, including the Mayan jungle, mangrove wetlands, and a tropical beach. When you play this course, you’ll be golfing alongside miles of freshwater canals surrounded by mangrove trees and limestone walls. Two holes in particular have unobstructed views of the Caribbean. The hazards on this course aren’t just typical sandtraps, either, but natural elements of the environment like cenotes (sinkholes) and the canals themselves. 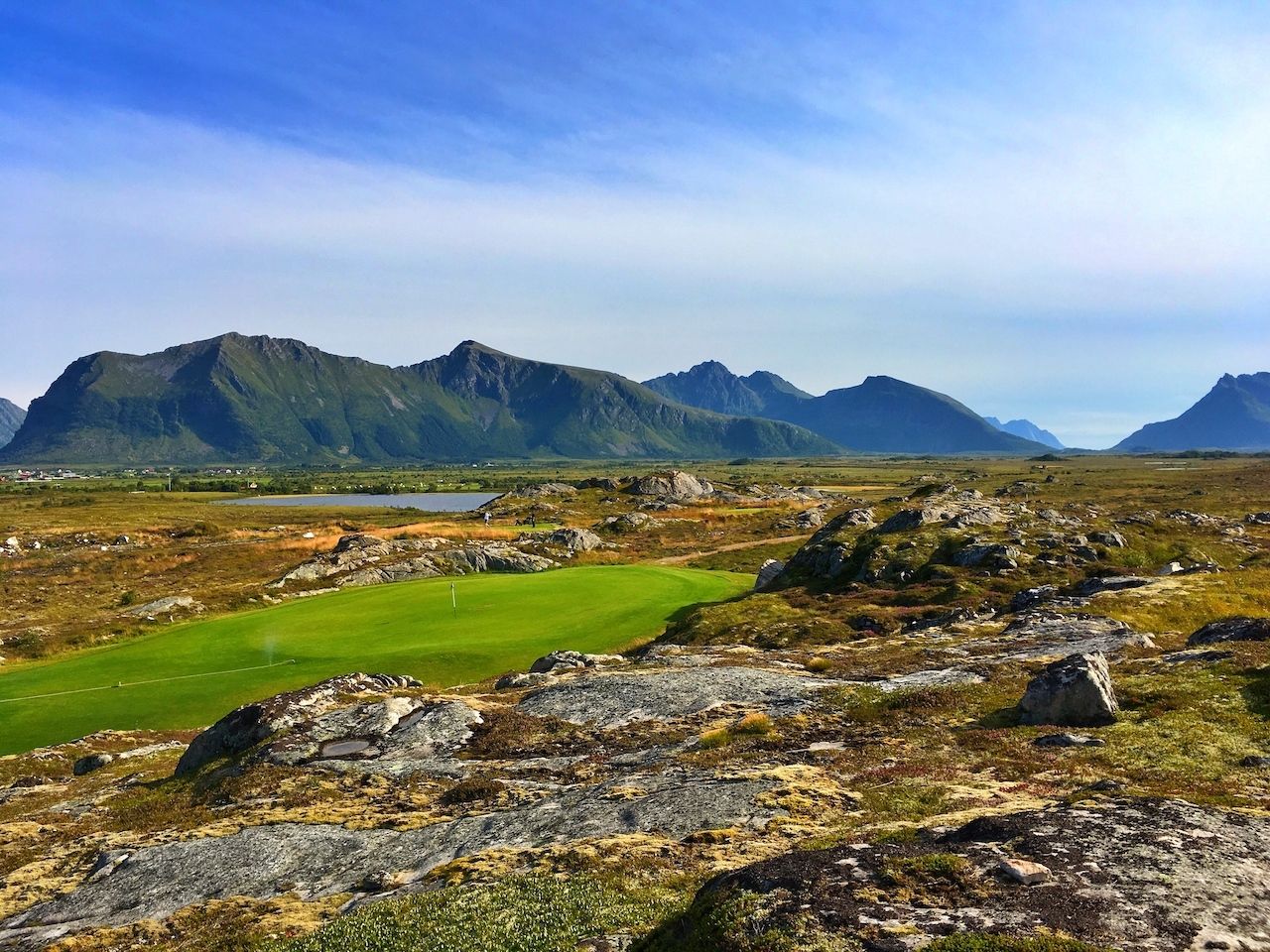 Located on the stunning Lofoten Archipelago of Norway, the 18-hole Lofoten Links has unobstructed views of the ocean. Indeed, the water serves as an obstacle to many holes themselves, and sandy beaches act as natural sand bunkers. Given the course’s northerly latitude, it’s one of the only places where you can play a round under the midnight sun, or even catch a glimpse of the northern lights. The archipelago itself is full of white sand beaches, small fishing villages, and wildlife like puffins, eagles, whales, and moose — so there’s plenty of reason to stick around once you’re done playing. 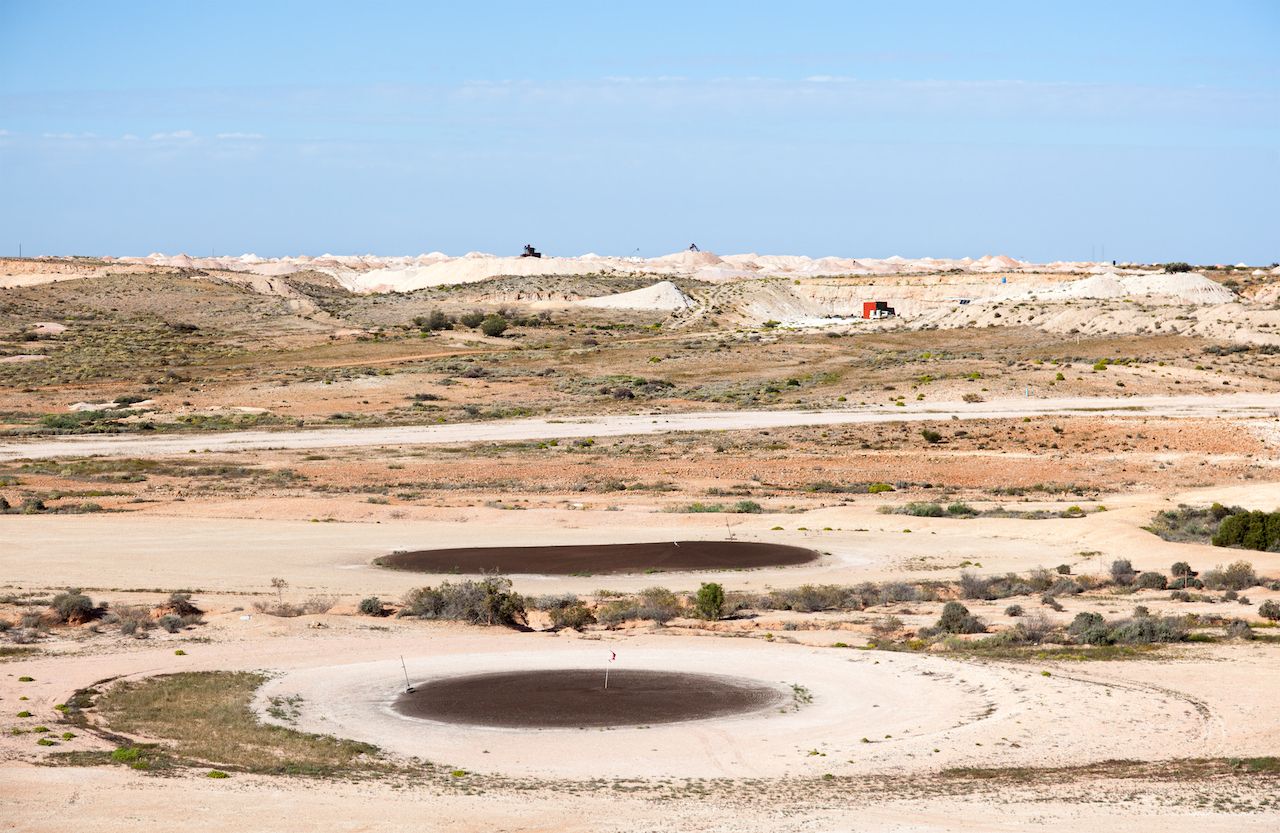 Using the term “green” at any point during your golfing experience at Coober Pedy Open Fields Golf Club probably wouldn’t be strictly accurate. Open since 1976, this unique course spans the desert flats of Coober Pedy in Australia’s barren Outback. The greens aren’t green at all but black with white fairway, and if you’re lucky, you might even find an opal while you’re looking for your lost ball. Truly one of the most unusual courses in the world, you’ll be using a piece of artificial grass to tee off (instead of a real tee), and the putting greens are actually oiled down sand called “scrapes.” It also happens to be the only course in the world with reciprocal rights to the famous Royal and Ancient Golf of St. Andrews, meaning members of Coober Pedy are permitted to play at the exclusive St. Andrews course. 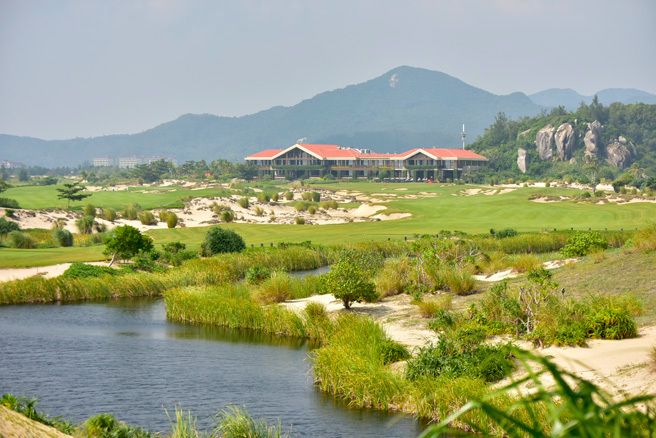 Photo: The Dunes at Shenzhou Peninsula/Shutterstock

China might not strike you as a beach destination (or a golf destination, for that matter), but The Dunes combines both. On the southeastern shore of Hainan Island, between Haikou and Sanya, the Dunes at Shenzhou Peninsula is a tropical paradise that will make you think you took a wrong turn and ended up in Hawaii. The 36-hole course on the South China Sea features natural rock outcroppings, beachside holes, and sand dunes sloping into tricky bunkers. The fifth hole is particularly picturesque, as you’ll find yourself staring straight out across the western bay before moving on to enjoy the sea views and dramatic rock formations.

Uummannaq has the distinction of being Greenland’s first golf course, as well as the northernmost course in the world. Home of the World Snow Golf Championships since 1997, the Uummannaq course changes every year due to the shifting ice and changing climate, and golfers use red balls to contrast with the color of snow. Each March a nine-hold course is set up across a field of fjords and icebergs, and players with a handicap of up to 36 are invited to play. You still have to worry about hazards, but in Greenland those hazards are hypothermia and polar bears.

OutdoorThe Home of American Golf Is in North Carolina. Here’s How To Experience It.
Tagged
Outdoor
What did you think of this story?
Meh
Good
Awesome