It’s been more than two years since the United Nations first called the situation in Yemen the worst humanitarian crisis in the world, and since then the situation has merely deteriorated. Enduring a civil war since 2015, millions of Yemenis have fled their homes or are on the brink of starvation. With coronavirus, an already desperate situation has become catastrophic.

“The armed conflict between the Saudi-led coalition and the Houthi armed group as well as the humanitarian crisis has contributed to creating unspeakable suffering for millions of civilians,” Afrah Nasser, a Yemen researcher for Human Rights Watch (HRW), tells Matador by email. “Now the pandemic is only another disaster within the already humanitarian disaster in the country.”

Yet just as Yemen needs the world’s help more than ever, it is getting less. At the end of March, as the pandemic tore into the country, the Trump Administration drastically cut humanitarian funding to Yemen to protest Houthi interference in the provision of assistance.

“USAID basically has decided to make a political point,” Scott Paul, humanitarian policy lead for Oxfam, says. “They want to demonstrate to the Houthis that no one should get in the way of, or intrude, or interfere in the work of humanitarian agencies. So they basically just cut off almost all of the assistance going to the north.”

Paul says that while both parties in the conflict have attempted to place “unacceptable” control over the delivery of humanitarian assistance, the move by USAID, the US’s international aid and development agency, has “given other parties the moral high ground to say it’s the US starving people for a political agenda and not them.”

He later adds that he thinks “there’s some truth to that. USAID is putting some of the world’s most vulnerable and at-risk people in the middle of a dispute, rather than trying to help where we can.”

Today, funding levels are plummeting when they’re needed more than ever. Just three weeks ago, a UN donor event co-hosted by Saudi Arabia raised only $1.35 billion of the $2.4 billion needed to keep the country from total collapse.

“The funding situation for humanitarian work in Yemen is, frankly speaking, dire,” says Riona Judge McCormack, Yemen spokesperson for the Norwegian Refugee Council (NRC). “Despite COVID-19 worsening the situation on every front, NGOs in Yemen actually have less money coming in than at any time in the last three years.” 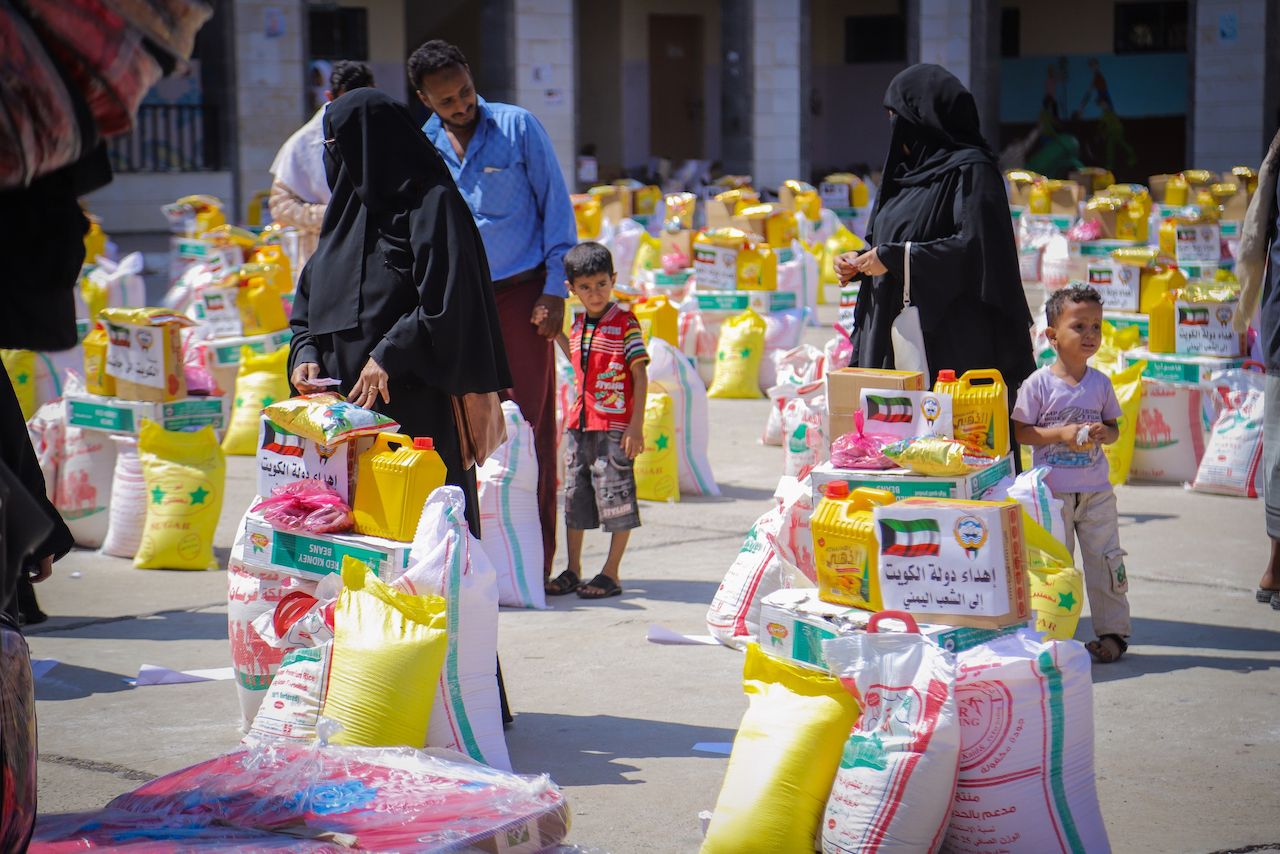 Yemen was already the poorest country in the region and highly dependent on food imports when war broke out in 2014. That year, Houthi fighters, Zaydi Shia Muslims from the north, seized control of the capital Sana’a and demanded the resignation of President Abed Rabbo Mansour Hadi. Although the Houthi represent a unique type of Shia Islam, they were historically supported by Iran, which is a Shia Muslim nation that often finds itself at odds with the Sunni Muslim world.

Concerned about Iran’s involvement, Saudi Arabia and eight other countries with Sunni majority populations mounted an air offensive against the Houthi in mid-2015. The war is still dragging on. Although President Hadi was reinstated, he is in exile in Saudi Arabia. In the meantime, Al Qaeda and Islamic State militants have taken advantage of the chaos to seize territory of their own in Yemen.

The United States has provided material and logistical support to Saudi Arabia, which is the largest purchaser of US weapons. President Trump has boasted that those arms sales are massive job creators, but his numbers have been debunked.

President Trump has also vetoed efforts to end US support for a conflict that many observers say violates human rights. In fact, a UN Human Rights Commission report said the US, in its support of Saudi Arabia, may be complicit in war crimes in Yemen.

“For the past five years now, under two administrations, the US has been selling weapons to one side of the conflict,” Paul, from Oxfam, says.

Throughout all of this, it’s the Yemeni people who suffer. Of the country’s 28.5 million people, 24 million need humanitarian assistance and 3.6 million have been forced to leave their homes, according to the UNHCR. Moreover, both Saudi Arabia and the Houthi faction have bombed civilian targets and directly attacked hospitals and even physicians — adding to the suffering of ordinary Yemenis and destroying any hope of coping with the pandemic.

“The country cannot fight both a war and COVID-19.”

“Civilians in Yemen are facing the pandemic with no fully functioning healthcare system,” Nasser says. “More than half of Yemen’s health facilities are closed or partially functioning. Since 2015, parties to the conflict have targeted not only medical facilities but also medical personnel, as health workers have been threatened, injured, abducted, detained, and killed.

“Consequently, many medical professionals have fled Yemen, further damaging the ability of the healthcare system to respond to a pandemic,” Nasser adds. She said that although fewer than 1000 cases of COVID-19 were reported, the actual numbers are believed to be much higher.

The slashing of humanitarian aid has crippled efforts to slow the spread of the virus. Over a million displaced Yemenis are living in encampments with no running water. Simple supplies like soap are hard to find. Aid agencies already working to meet this need are now coping with a funding shortage.

“We’re particularly worried right now about water,” Judge McCormack says. “At NRC, we’re already seeing entire districts cut back to half their usual water volumes, because the funding to run generators or send water by truck has already dried up. At any time, this would be shocking, but in the middle of a pandemic which can only be fought by handwashing and good hygiene it is unconscionable.”

Although, in May, USAID did provide an additional $225 million in aid to Yemen, that remains well short of the funds needed. Aid organizations insist that they are able to work in Yemen, and that humanitarian aid should continue to flow even as they acknowledge the difficulties presented by the civil war.

“We are in a moment that requires truly global solidarity.”

“Due to the ongoing conflict and the sheer scale of the needs, Yemen is a highly complicated environment to work in, but humanitarian agencies like ourselves are continuing to reach those who most need our help,” Judge McCormack said.

UNICEF has called the conflict in Yemen, “A living hell for children.” Judge McCormack described the agony for families who have had to be uprooted from their ancestral homes and their livelihoods, as their villages and farms have been destroyed, and as their family members have been killed.

“The impact on children is particularly severe,” Judge McCormack says. “It’s children and their families we’re seeing every day, arriving in desert areas or muddy fields with almost no belongings, having fled everything they’ve ever known. Two million children are suffering from acute malnutrition — that’s the kind of malnutrition that quadruples their risk of dying.”

Judge McCormack adds that “there is a shocking discrepancy between the money spent fighting this war and what’s been provided to save innocent civilians from its effects. Now is not the time to cut funding. COVID-19 is hitting a country with few defences and a population already weakened by hunger and other diseases.”

As this is happening, the resilience of the Yemeni people cannot be forgotten. They have worked hard to help each other. Judge McCormack points to the fact that 92 percent of the people working for NRC to provide aid in Yemen are from Yemen itself. But the civil war has been relentless, and without a ceasefire, ending this living hell seems next to impossible.

“There is an urgent need for a ceasefire in Yemen,” Judge McCormack says. “The country cannot fight both a war and COVID-19. Even in the middle of the pandemic, with cases hitting a peak, we’re seeing airstrikes and fighting raging on. Thousands of civilians are still fleeing each week, and healthcare facilities are still being attacked.”

The overwhelming majority, 95 percent, of Yemenis want a ceasefire. Judge McCormack says that “all parties on the ground must immediately lay down their weapons and focus on battling Covid-19.”

And while the war seems intractable, US citizens are not powerless. They can tell their congress members and senators that they disapprove of arms sales to Saudi Arabia and want the US to use its leverage to work toward a ceasefire.

“This is a complex and multifaceted conflict,” Paul says. “There is no good side and bad side, and if we’re serious about demonstrating the credibility to be a peace broker, to solve the largest humanitarian crisis in the world, we can’t be an arms broker to one side.”

US citizens should also voice their desire to see the US to lift the suspension of aid to Yemen.

“We are in a moment that requires truly global solidarity,” Paul says. “COVID is not affecting people just in one country. It’s affecting people everywhere. And in line with the response of Congress and of Americans for many decades, we want to do our part to help.”

While Congress’ efforts to stop US support for Saudi Arabia were previously vetoed by Trump, Americans can let their representatives know that they care about his humanitarian crisis. With enough votes, vetoes can be overridden. And with enough public dissatisfaction, presidents can change their course.

ActivismThe 5 Best Environmental Charities To Make Your Money Matter
Tagged
Activism COVID-19 Yemen
What did you think of this story?
Meh
Good
Awesome

The Otherworldly Beauty of Socotra Island

How To: Travel To Socotra Island, Yemen

Dreaming in Arabic: Learning in Yemen