We hope you love the spaces and stays we recommend! Just so you know, Matador may collect a small commission from the links on this page if you decide to book a stay at Yonder Escalante. Listed prices are accurate as of the time of publication.

Charles Tate knows a thing or two about RV parks. After taking an interest in the industry almost a decade ago, the financier bought a 1977 Airstream and began touring the country. He learned what RVers liked and, more importantly, what they didn’t — namely how close together the units are at most RV parks and the sorry state of most RV park bathrooms. There, Tate found his entryway into the industry, and Yonder Escalante was born.

Yonder is a 20-acre RV park in southern Utah’s Escalante-Grand Staircase National Monument that has 35 RV sites, 22 cabins, 10 renovated Airstreams, and a variety of communal spaces. I met Tate in the open-air clubhouse the morning after I arrived. I’d just finished splitting a breakfast burrito with my mom that we’d ordered from the on-site food truck, facing the cluster of cabins where our tiny-home-style accommodation was located. He was sitting in a lounge chair beside one of the unlit firepits, facing the hybrid reception area and general store. Approaching our table, he remarked how nice it was to see a mother-daughter duo traveling together, explaining that he’d founded the property with his son James in an effort to evolve the RV space. 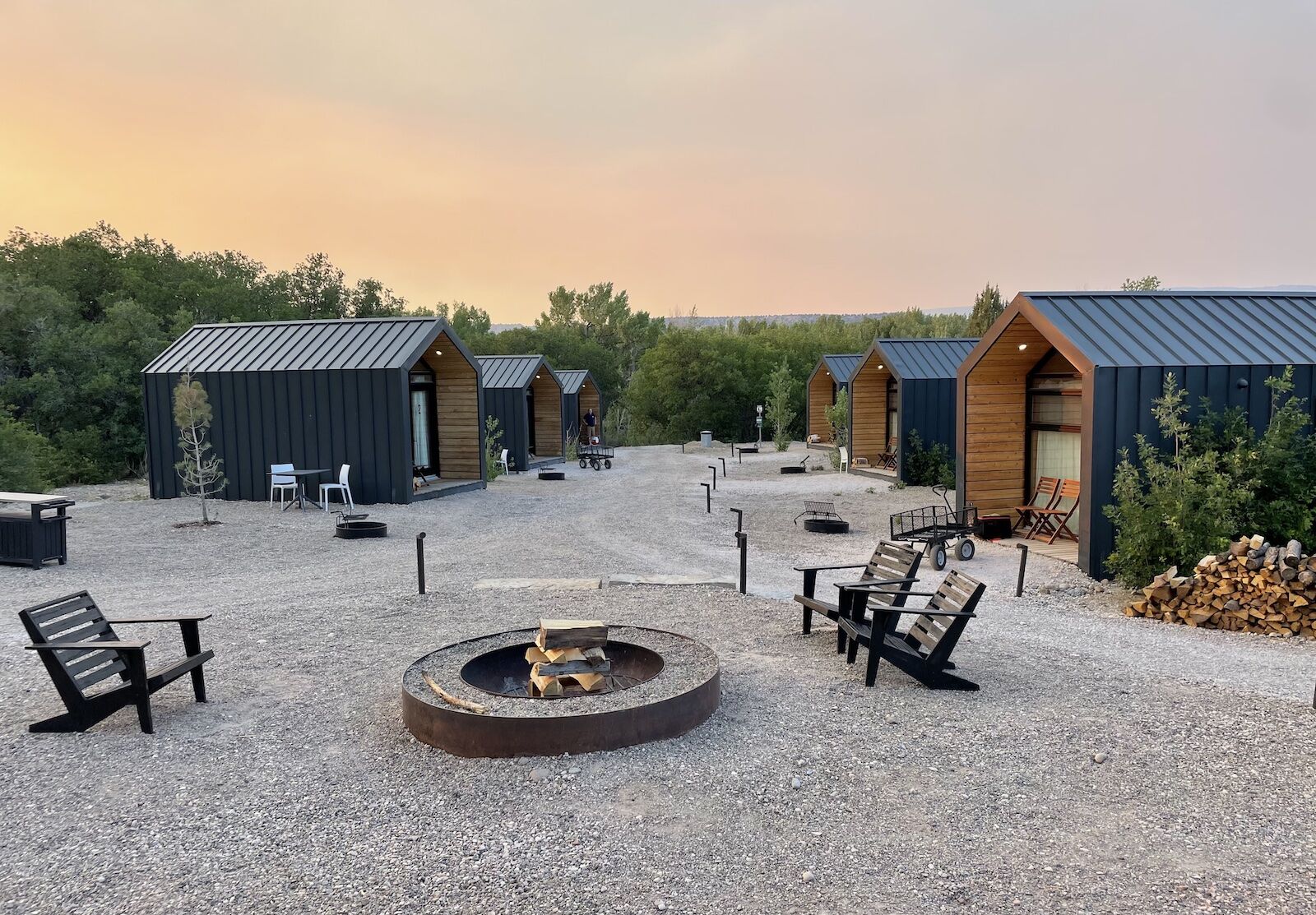 “I’ve never seen an industry that’s so typified by cheap, cheap, cheap,” Tate told us. “Everything you read is about how to go on an RV trip and spend less money, and finding a place to park is a big part of that. This is really designed to appeal to people who want a much better RV park experience, not just a parking spot.”

The clubhouse is the nucleus of the property where many guests choose to eat, lounge, work, and otherwise spend their downtime. There are communal books and board games, and on the night I arrived, a local musician was playing an acoustic set while onlookers sipped beer, wine, and mix-it-yourself cocktail kits from the general store. 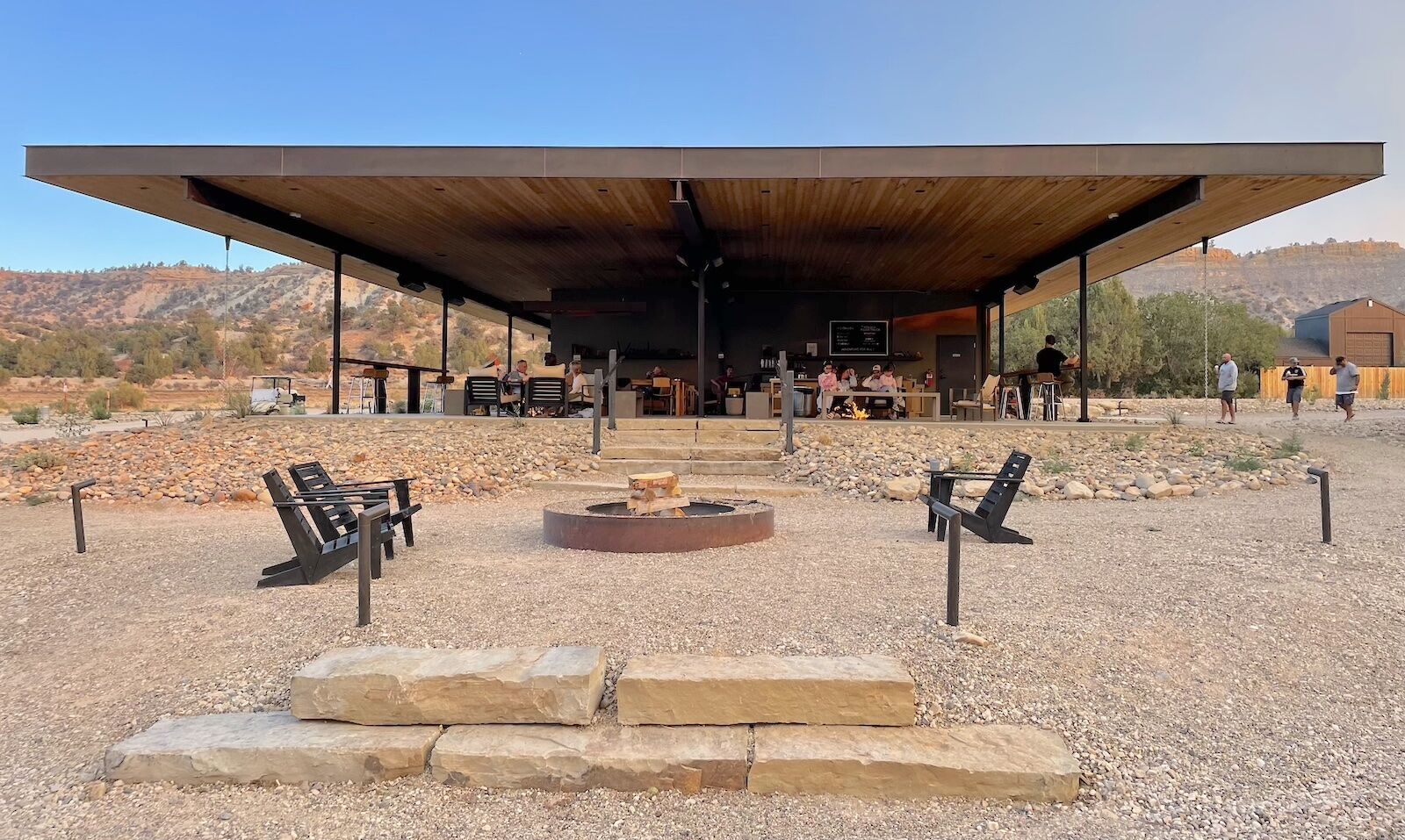 Between the clubhouse and the general store is the first block of bathrooms, which is a point of pride for the Yonder team. Having heard countless complaints about the bathrooms at most RV parks, Tate knew that he wanted to create a spa-like atmosphere with amenities such as luxury bath products, hairdryers, flat irons, and makeup remover. A second bathroom block on the other side of the property has outdoor showers with desert landscaping befitting a home patio and overhead heaters for optimal comfort.

Flippant as it may sound, Yonder’s outdoor showers encapsulate its essence: an immersive nature experience that both purposefully disappears against the rugged backdrop of the national monument and stands out as an oasis of comfort amid Utah’s hot, craggy, dusty desert. (Yonder also has an answer for the heat and dirt in the form of a large swimming pool and on-site laundry facility.) 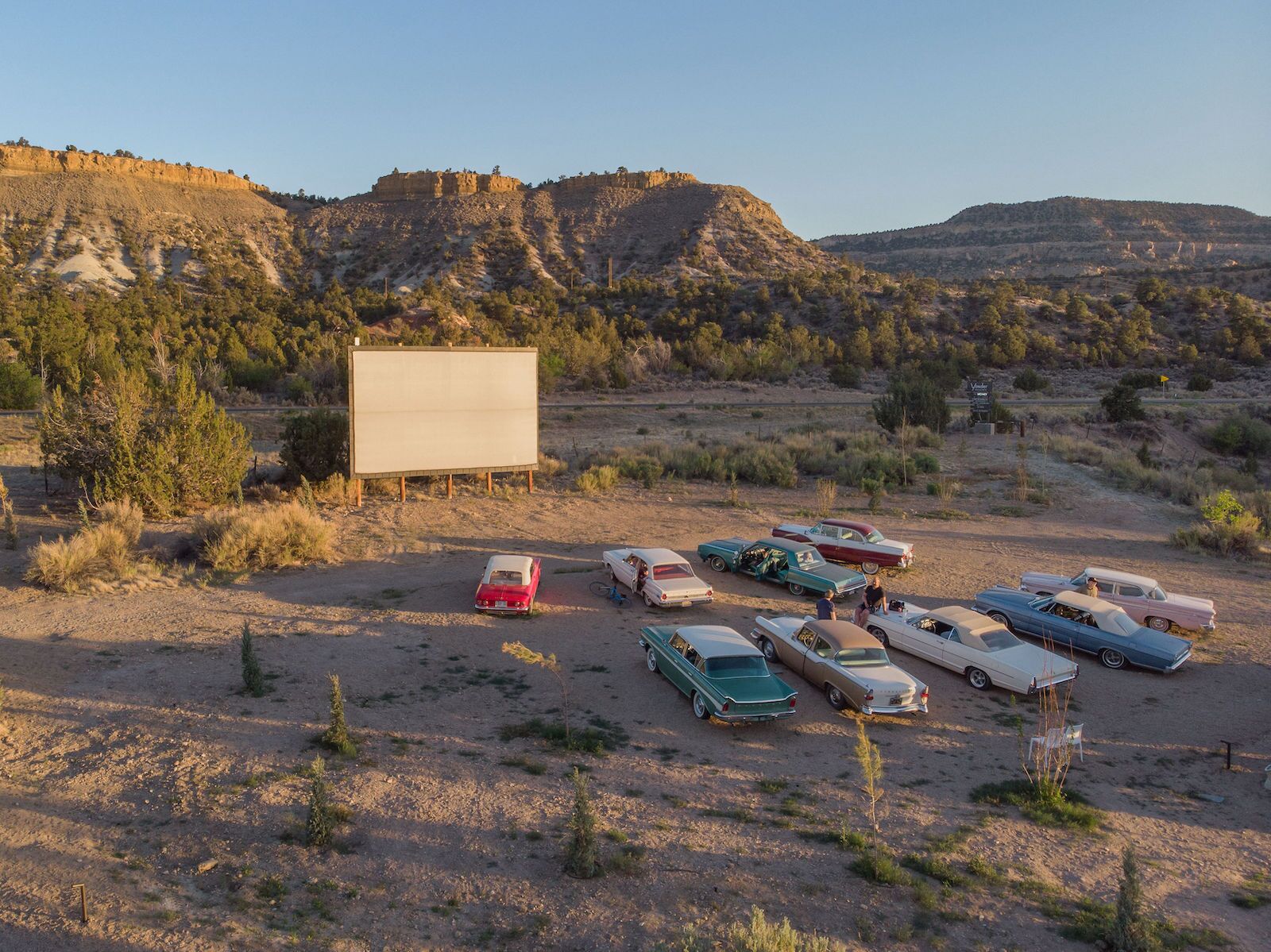 Before Tate bought the plot in 2018 it belonged to the Shooting Star RV Park, which came with its own drive-in movie theater. The drive-in is still there, although the DVD player that the old park used to show movies has been upgraded with a projector and FM transmitter. The Yonder team also drove in a small fleet of classic cars to add to the existing collection — there are now nine total — and set up a concession stand with snacks like popcorn and Milk Duds for the ultimate viewing experience. Guests staying in the cabins and Airstreams closest to the screen can also borrow listening devices to watch from their patios. Family-friendly movies — during my three-night stay the lineup was The Sandlot, Back to the Future, and Cloudy with a Chance of Meatballs — are screened every evening around dusk. 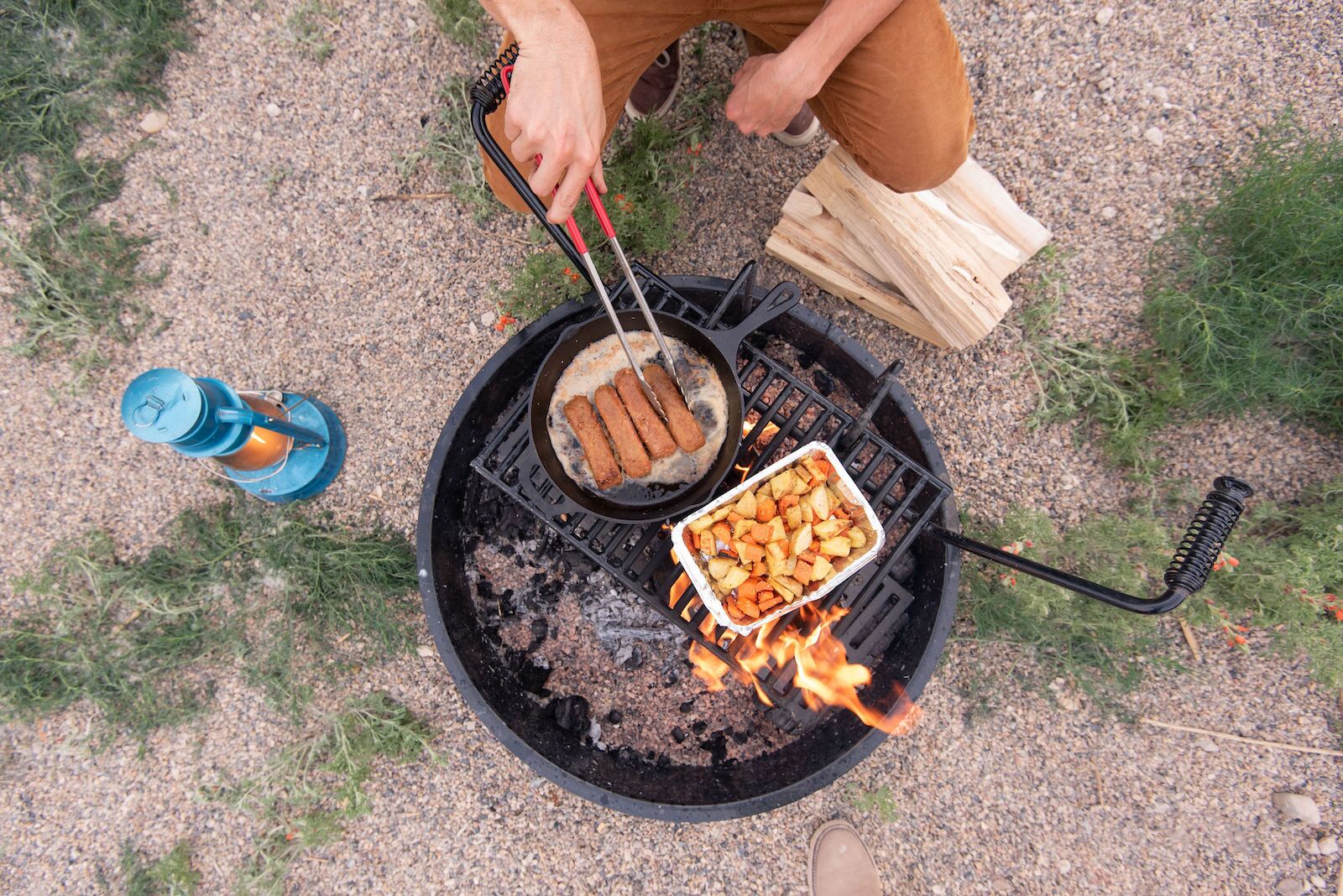 The drive-in is not the only amenity at Yonder with a built-in experience. All of the cabins and Airstreams come with private grill grates that guests can use to prepare meal kits that are available for purchase at the general store. S’mores are roasted nightly over the communal fire pits at the clubhouse, and personal s’mores kits are also on offer for private roasting.

Tate can’t take credit for the rest of the experiences many Yonder guests are after. Located off a stretch of the Highway 12 that’s been designated a Scenic Byway, the property lies midway between Bryce Canyon and Capitol Reef National Parks in the heart of slot canyon country. Hikes such as Spooky and Pekaboo Gulch, Lower Calf Creek, and the Escalante River Trail have put this pocket of southern Utah on the map for anyone who loves road trips and the great outdoors. 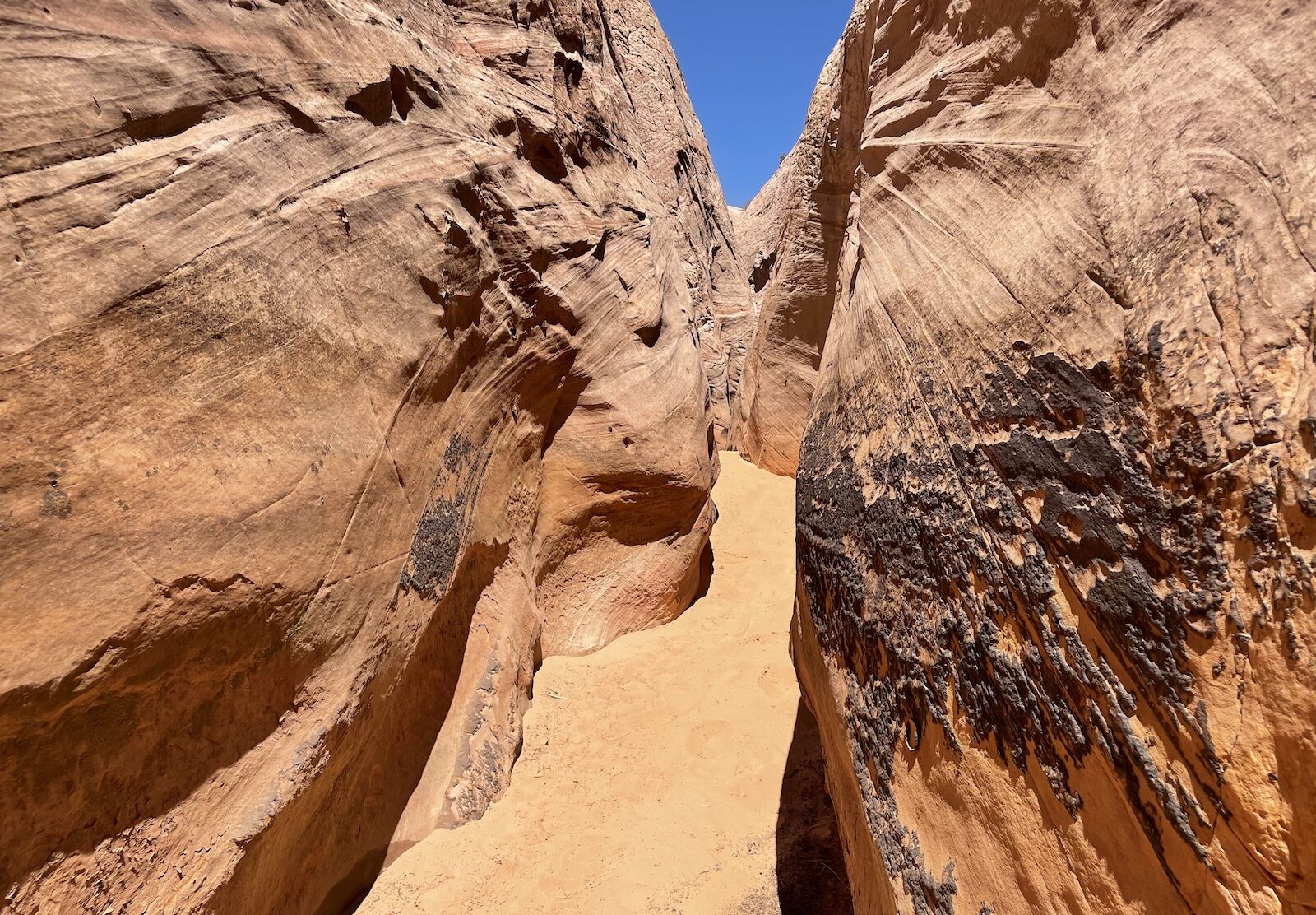 You might think that building a glampy RV park in the middle of an increasingly trafficked part of southern Utah is a recipe for lodging costs that no real outdoorsperson would be willing to pay. Not so. For the level of amenities guests are offered, Yonder’s prices are competitive with other glampsites and RV parks in Utah. Campervan sites start at $59 per night, RV sites start at $129 per night, cabins start at $169 per night, and Airstreams start at $209 per night.

I have yet to visit an RV park in an actual RV. But at half the cost of staying at one of the fixed accommodations, with all the same perks, Yonder’s RV and campervan sites strike me as a pretty great deal. Heck, I’d come back as a vanlifer for those outdoor showers alone.

Road TripsThese 11 Scenic Byways Are Some of the Most Beautiful Road Trips You Can Take in the US
Tagged
Epic Stays
What did you think of this story?
Meh
Good
Awesome