View all travel news
Top Destinations
Top CitiesView All Destinations
Trending Regions
Trending Cities
Load More
Chris Burkard and crew spend weeks, months, even years planning expeditions that result in some of the perfect days captured here. Just don’t ask them to tell you where they are.

I was hostage to a group of wave-thirsty surfers who bought a ticket for me to a secret destination. My first glance out the window told me we were arriving in the Caribbean, but from the moment the plane touched the ground to our final destination it was a series of turns I could not remember if my life depended on it. 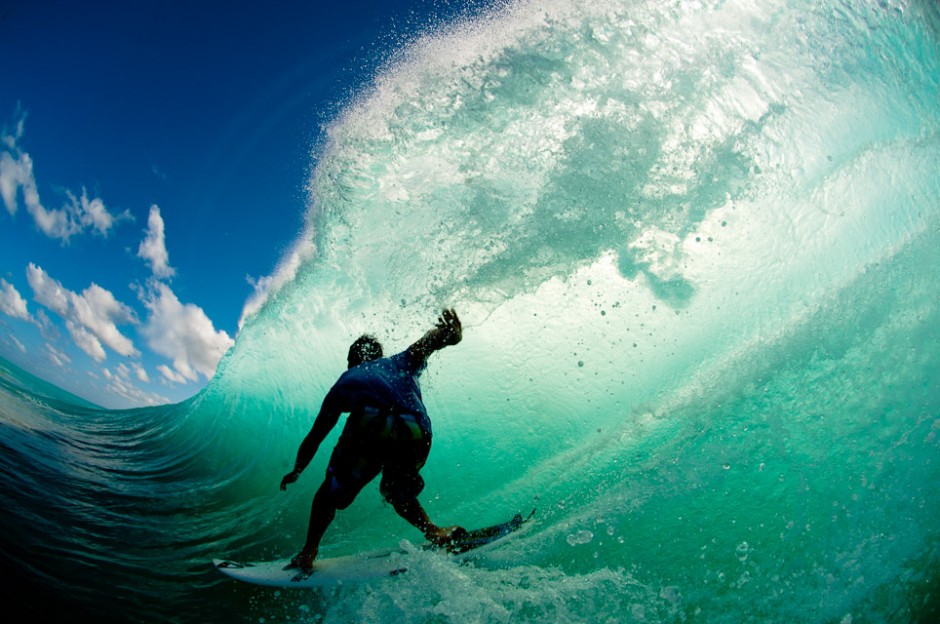 Arriving at the beach I saw the blurred shape of a perfect blue barrel, which is what we would all be surfing for the next few days. I had no clue how I got there or how to get back home, but looking at what was in front of me, leaving was the last thought on my mind.

Walking up to two fishermen, we introduced ourselves, trying to explain our search for waves the best we could. With hundreds of languages spoken in India, the chances of communicating with anyone through spoken language was slim to none. Lucky for us one of the men spoke a form of Hinglish (Hindu/English). Trying to explain to him that we were looking for big waves we hoped to ride, pointing to our surfboards as if that was any help. Staring confusedly, he only shook his head and then they both headed down to the beach. 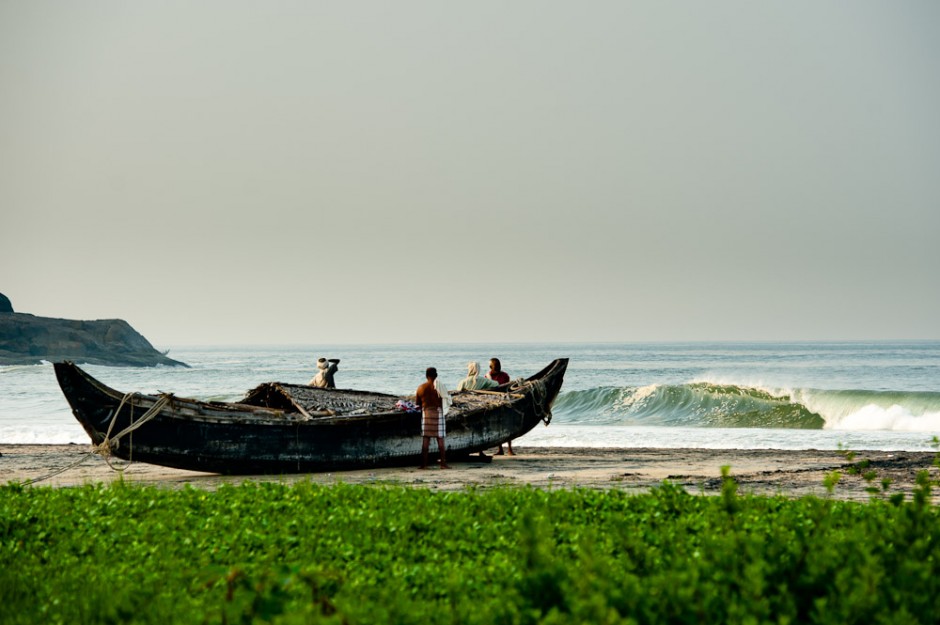 With no leads to follow, we decided to walk towards the ocean anyway and see if there was any promise of surf down the coast. The sound of a wave crashing rang in our ears and suddenly we were all still for a moment. The second wave crashed and we quickly glanced at one another and quickened our pace as we finally got a view of the ocean. Just at that moment a perfect barreling wave peeled down the beach. The fishermen stared past the sets, trying to figure out where to navigate their boat past the break. I can only smile thinking about how many days a year they had this dilemma of avoiding perfect surf breaking on their shores.

Arriving in Nantucket, the first thing I began to realize is that every spot is an ever-shifting sand bar. A spot with no shape one month is suddenly a peeling A-frame the next. Making our way around the island, we found the winds had shifted with the afternoon — sure to bring offshore winds on a particular side of the island. 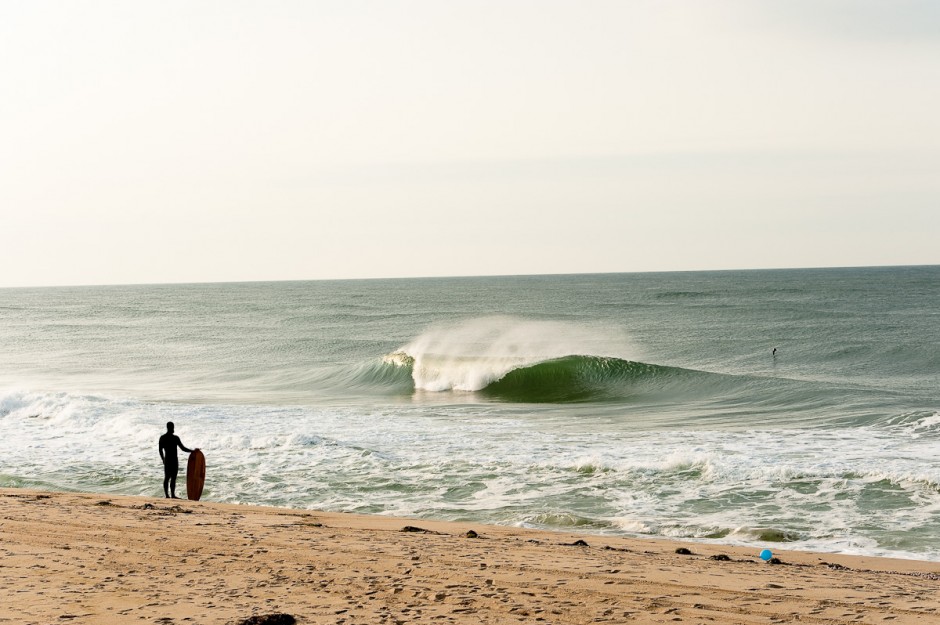 Making our way through the beach grass, we looked down upon an empty coast and a perfect peak with the winds, just as we were told, beginning to shift offshore. Hours later the wave looked much different, and in a few days the sand would probably shift. The lone wave would be gone just as fast as it appeared.

The air was cold and damp. Each step down the trail brought a little fear. Miles later the trail opened up onto the rocks and wood debris of the beach. Conifers lined the rocky coastline, and there seemed to be more bear tracks than human footprints. The number of people that know the best conditions to score this spot can be counted on one hand. 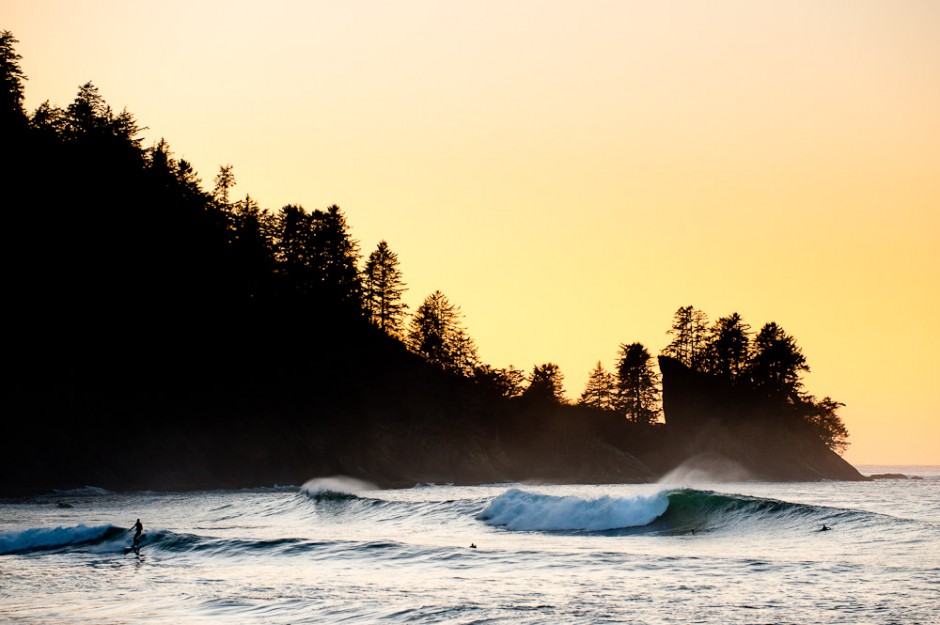 Driving up the coast, the fog remained thick. Twenty minutes inland the weather was dry and hot, but for now I remained in my winter jacket and pants. Later in the day the fog began to break apart and I got my first glimpse of the coastline. The water looked cold as ever. Not a car in sight. 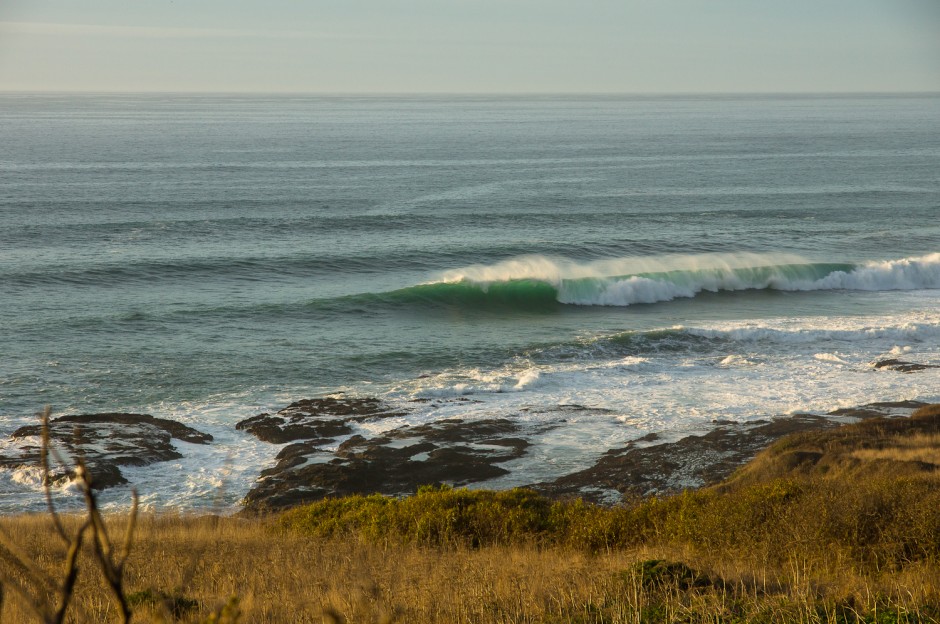 I made my way through the brush as set after set formed from the deep-water channel rushing into the rocky shore. It was well worth the wait. Now I just had to muster up the courage to paddle out.

You can map out an entire coastline and dial in the best swell angles and wind, but not until you actually arrive does everything begin to make sense. Driving the coast of New Zealand, I made sure to map out every potential break to visit and religiously checked each one. I scored some spots, but got skunked more times than not. 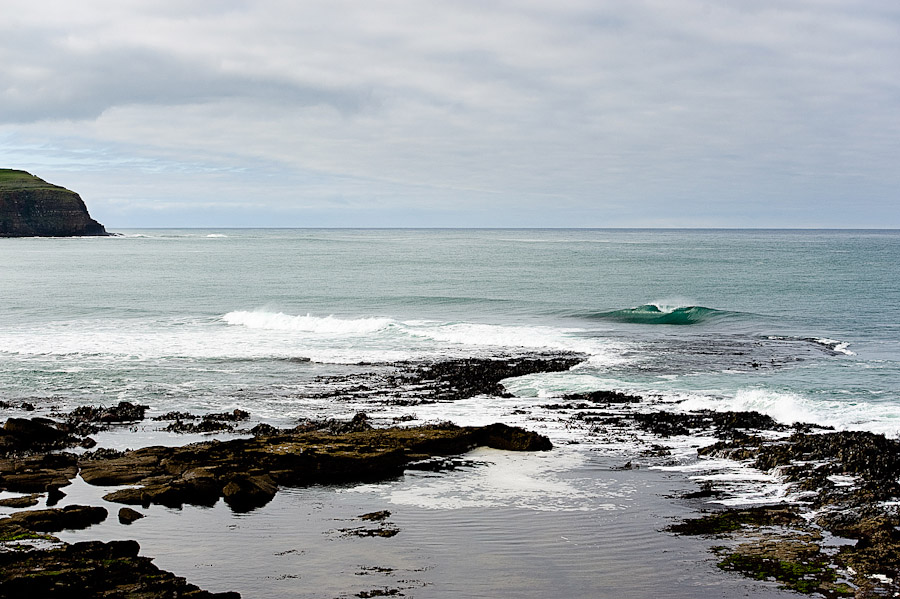 Yet with all the planning, in one moment the shape of a wave in the corner of your eye can change everything. This is when you jump from the planned to the unplanned, and it’s often the most thrilling moment of any trip. Finding this wave was just that — we pulled a sharp u-turn, then took the van into a field and began hiking down the rocky cliffs. Even if this spot had been surfed before today, we felt like explorers landing upon something better than we ever had planned. My map has notes tracking each day and wave we surfed. This wave, however, remains unmapped.

If you want to score surf in Japan it’s about who you know, and we spent the entire week befriending a local shaper and surf legend. It was amazing spending time in this culture, but the waves were not kind to us. Our final day came and we began to pack for our flight out when suddenly we learned an offshore typhoon was sending a pulse of waves. 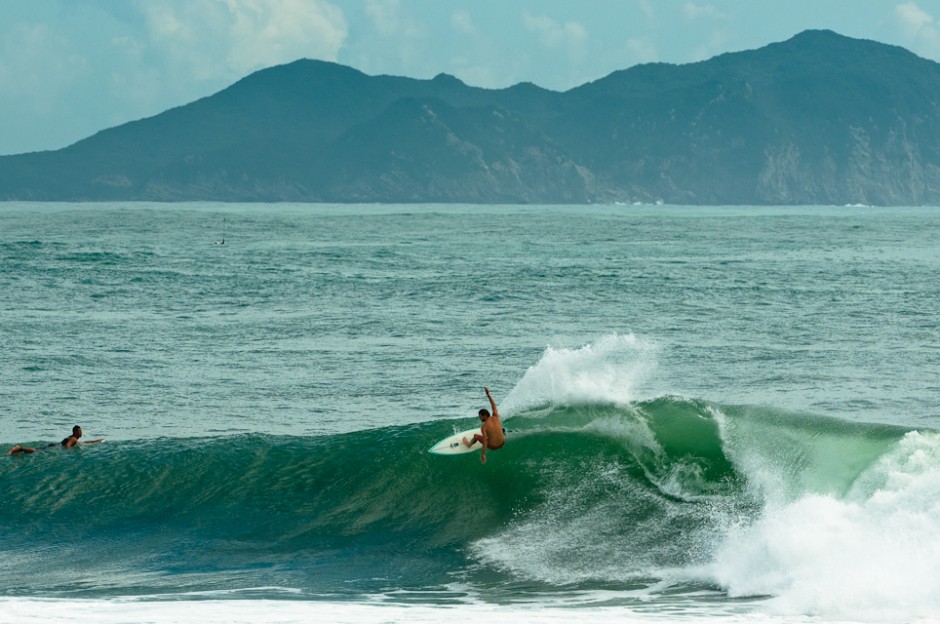 Rushing to this spot just before our flight, we surfed until the storm became too much. Running through the rain, we jumped into the van and sped to the airport.

The Indian Ocean has many world-class waves. While this wave may not be considered one, it breaks like this more times a year than you would want to count. To the children in the area the ocean is a playground, and they acted as if they had seen this scene a million times. Everyone else on this trip was freaking out at how perfect we had got it. 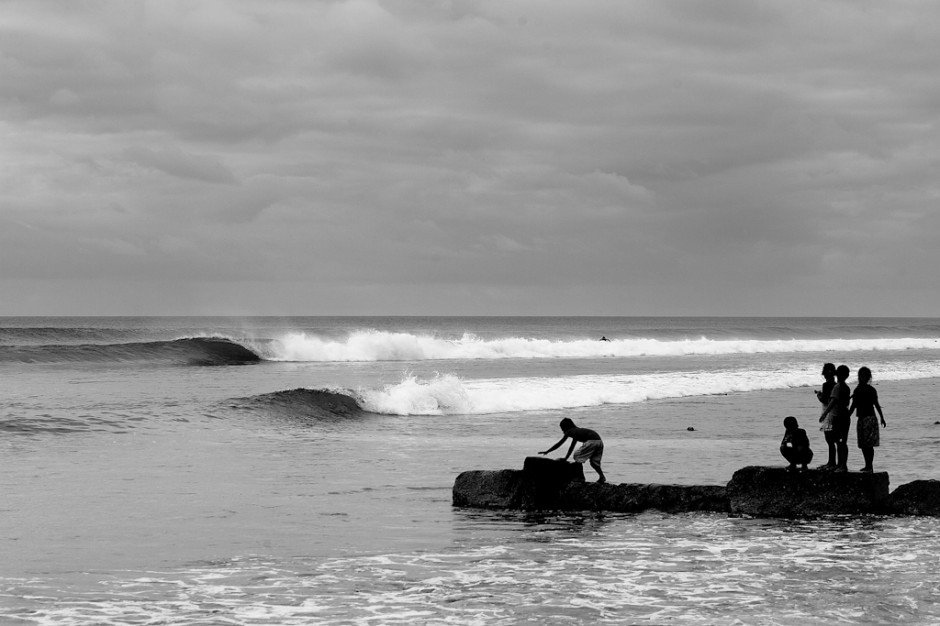 The locals swam in the shallows, enjoying the evening as a few washed clothes. It was surreal to see such amazing waves breaking with no one but a few surfers paying any attention to them. The Indians looked toward us as another set came breaking through the outside of the rocky cove. I pointed and yelled at one of the guys on the trip, “Did you see that set!” 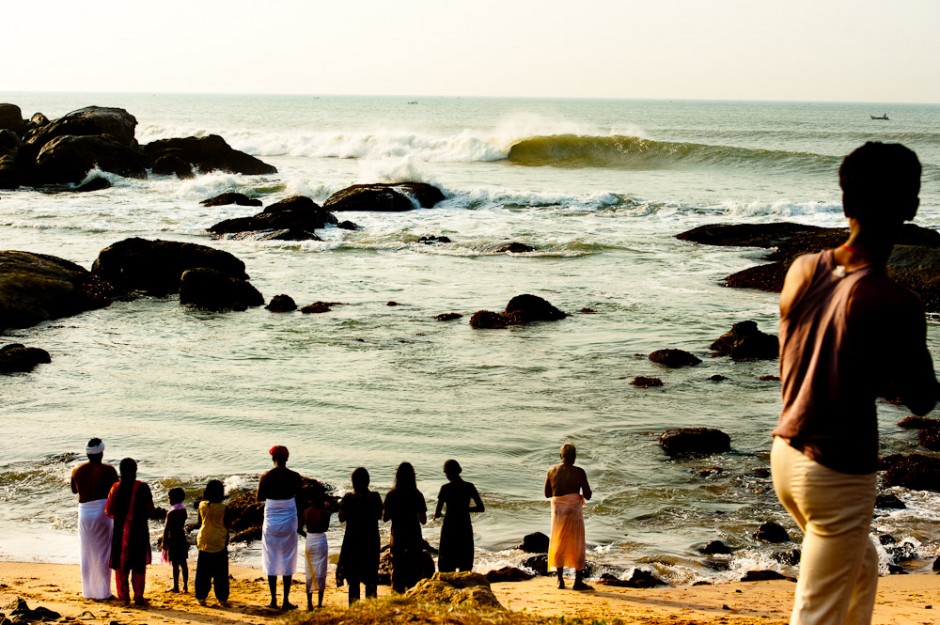 No sooner did I point then all the locals walked out of the water and began looking for what I pointed at. They seemed to be watching the wave, but I doubt many of them were of the mind to surf it the way we were. They turned and smiled, waving and pointing back at the wave. It’s no wonder no one ever hears of waves in India — most of the locals have never seen anyone riding them.

The coastline that is so often riddled with heavy onshore winds will reward those patient enough with a few glassy evening surf sessions each year. Being the only ones who were close enough to realize this in time, we had the beach and waves all to ourselves. It took years of scouring this coastline to even find this spot, which is not accessible by road and hidden beneath cliffs. 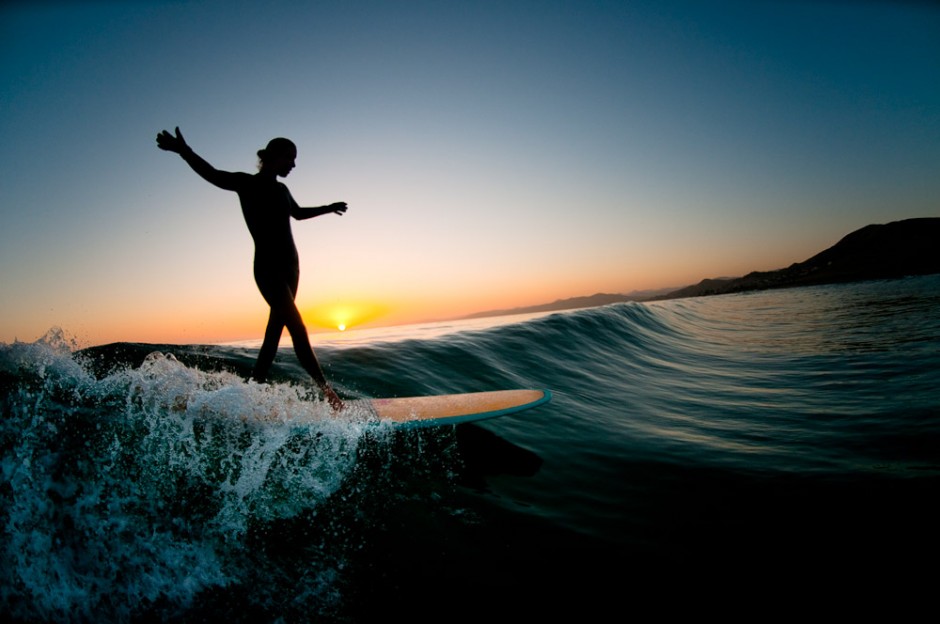