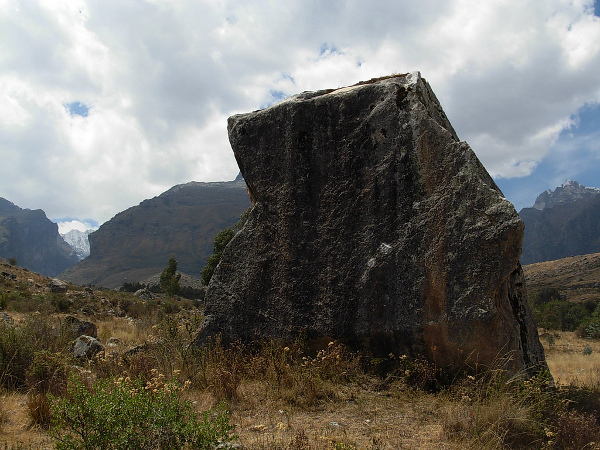 Jon Clarke explores the granite boulders of the Peruvian Andes and loses some skin in the process.

I’VE BEEN GIVEN a treasure map. I came upon it, like any good treasure map, through means too complicated to describe here. Before the cutlasses come out, this bounty isn’t to everyone’s taste: white granite boulders, studded with big, fat, painful crystals. 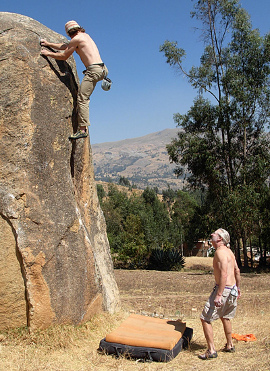 It started with a trip from my current home town of Trujillo, Peru, to the town of Huaraz in the Cordillera Blanca. I had planned on going hiking, but the treasure map–a bouldering topo–changed everything, with words like “beautiful turquoise lake,” “small paradise,” and, ominously, “horrendously good friction.”

I’m a sucker for secret spots, and this seemed to be just that. Before I knew it, bouldering had stolen the top spot among my reasons for visiting Huaraz.

I’m not much of a planner when it comes to trips. I had a head start with the topo, but I still showed up in town without any gear or local knowledge.

Against all the odds, my plans fell together in less than a day, thanks to a CouchSurfing friend, Franck Beteta Vela of Andes Camp, who fixed me up with shoes, chalk, tent, sleeping bag, and all the trimmings required to get out of town.

Accessing the local climbing community was laughably simple. Twenty minutes spent hanging around Andean Kingdom and Galaxia Expeditions. near Parque Periodista allowed me to chat, in fluent Spanglish, to a couple of the climbing guides and set up a joint trip to a local spot.

It turned out to be pretty easy to get a Peruvian climbing buddy; besides their willingness to heap free advice upon me, the guides were also looking for an excuse to go climbing in their free time. 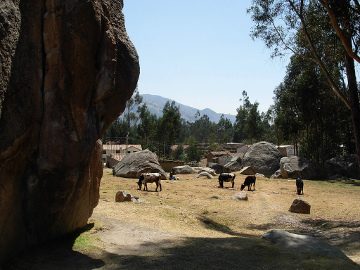 The first spot we visited was Keushu, the very same place the topo had pimped.
A bumpy combi ride to Yungay followed by a trip in a colectivo taxi brought me to Llanganuco Lodge, run by the hospitable Charlie Good and his faithful hound Shackleton. I was already in possession of the topo, but Charlie offered me the Lodge’s copy anyway.

A short walk away, I was lake-side, in range of some 90 problems spread over 21 boulders. As the topo warned, the majority of the problems had tricky sit-starts, but I managed to tick a few down on the modest end of the scale.

I was still woozy from the altitude jump, and it was slightly surreal working the problems in the perfect silence and stillness of Keushu, overlooked by the glacial peaks of Huandoy and Huarascan. I didn’t want to leave, but I had a couple of tip-offs for other spots.

Back in Huaraz, I joined forces with a couple of new bouldering compañeros and headed down to Huanchac, the best-known local bouldering spot. Located a 5-sole taxi ride from town, Huanchac is a selection of six large boulders lying between tall trees, a couple months’ worth of problems for those sticking around. 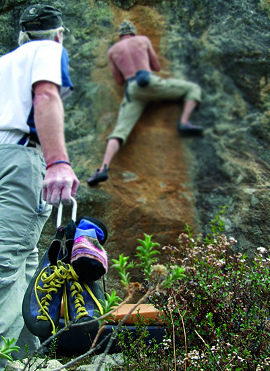 Squeezed in-between the boulders, we encountered Roger, a local climber training for his mountain guiding exam, charging up everything in huge mountain boots. A climber named Gil, a mountain man from Colorado, bellowed in victory as he mantled the final moves of a tricky overhang that he’d been working, on and off, for a week. A cow-herding señora showed up mid-session to claim site ownership and a propina; we kept her sweet with a couple of soles.

A great place to lose skin

Despite the distractions, all was going well until I slipped one too many times off the same move and, with a dull tug, felt the skin rip off my fingertips. All the tape in the world couldn’t sort my digits out, so for the following day I was confined to the role of spotter, as we bumped from Huaraz up towards the foothills of the Cordillera, headed for the Lazy Dog Inn.

Soon after, we wandered around some very large boulders as Creedence Clearwater Revival played on a nearby CD player. The problems were twenty to thirty feet in some spots, so the climbers cautiously picked their way up the chalked holds as I and the other spotters waited apprehensively some distance below, hands at the ready.

The midges were out for our blood, so after a couple of hours, we retired to the hospitality of the Lazy Dog for a very welcome cerveza.

I couldn’t face another day watching from the sidelines, so I decided to cut my trip short and retreat to the coast. Still waiting for me are the 140-plus boulders in Hatun Machay and the countless problems hidden in the valleys that wind up into the Cordillera.

With a tent, sleeping bag, stove, and enough food for a couple of days, anyone can hike up into the foothills and get the opportunity to put up new problems on untouched rock. So as soon as my fingers are healed, I’ll be back up to Huaraz to hang from the scar tissue.