The blades of the royal blue Hughes 500D rotated above my head. I could hardly breathe in the windswept air as I unloaded bag after bag onto the frozen, rocky surface. As the chopper lifted off I huddled on the ground, my gaze fixed on the terrain that would be our world for the next three weeks. There was no grass, no trees, no single soft spot in the whole basin; instead there was snow, ice, granite boulders of varying size, and the 2,000ft Mt. Proboscis — the reason we were here. We had traveled as a team of four to the isolated border of the Yukon and Northwest Territories via a series of aircraft — none of which we would see again until they came to pick us up. We were about 80 miles from the nearest signs of human habitation, on our own with the goal of establishing a new free route up Proboscis, as well as repeating another. 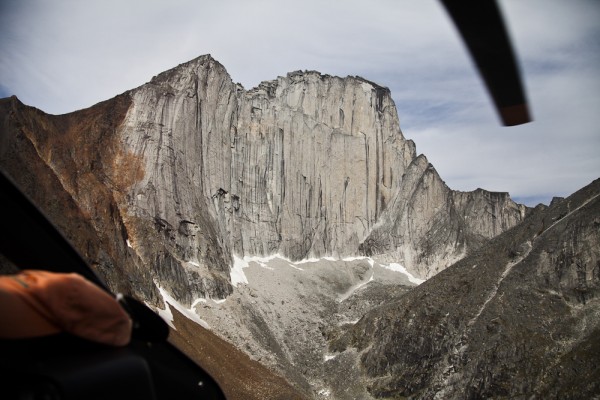 First view from the heli of the 2,000ft wall we were here to climb

In the months leading up to this moment, there had been much talk and hesitation on my part about committing to the trip. I had never been on an expedition before — sure I had done plenty of climbing in cold conditions, climbed some big walls, and had been in some fairly remote places, but never on this scale. With less experience in this kind of setting, and as the only woman, I was concerned I would be the weak link — that I wouldn’t be able to handle the environment, that I wouldn’t like it, that it would be too cold, too hard, too much. My mind changed daily until finally I decided that I couldn’t pass up the opportunity or the adventure.

The days went with each passing storm. We battled bouts of rain and snow — confined to our tents and tarpaulin kitchen — passing the time with crossword puzzles, Cormac McCarthy stories, curry dinners, expedition-style pizza parties, and bottles of whiskey until a break in the weather presented itself. Twenty days into it my husband, Ben Ditto, and I stood atop Mt. Proboscis. We had just made an all free complete ascent of the Original Route Variation (Women at Work) — grade VI 5.12 R. It had taken us 17 days and three attempts for this to happen. Weather had turned us around previously and we had gotten quite used to the cold, wet climbing as well as the possibility of retreat. As long as we were prepared we would be okay, so in our climbing kit for the day, aside from food and water, we carried jackets, rain jackets, webbing, pain killers, tape, and a knife — because you just never know. 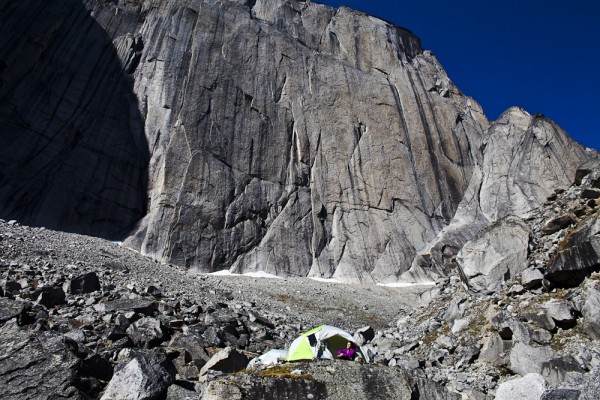 Base camp and our home for 17 days

As we stood on the top of the wall reveling in its grandeur and the vast expanse of glaciers and peaks that stretched on as far as the eye could see, we knew we were only half way — we had to get down now. We would have to descend the entire formation, pulling our ropes and threading them through the established anchors as we went, to get back to the ground. Hopefully we could descend the wall with ease, as it had taken us 13 hours to climb and it was just about dark now. There would be no room for any serious error.

The first 13 rappels went surprisingly well, aside from a baseball-sized rock that I kicked off the wall, crashing into Ben’s helmet (thankfully he was fine) and some rope trickery to avoid any snags. Three hours had passed since we started rappelling. We were making good time and were feeling a bit at ease as we descended into the first five pitches of the route, territory that had come to be quite familiar to us as we had climbed it three times already.

These sections had been running with some of the coldest water on earth and we had jammed hands, arms, and legs into these crevices as we ascended the wall. On our way down we tried to avoid the wetness as much as possible; we had had our fair share of its icy demeanor. There were only three more long rappels to the ground. And we were feeling some elation now that the ground was in sight. 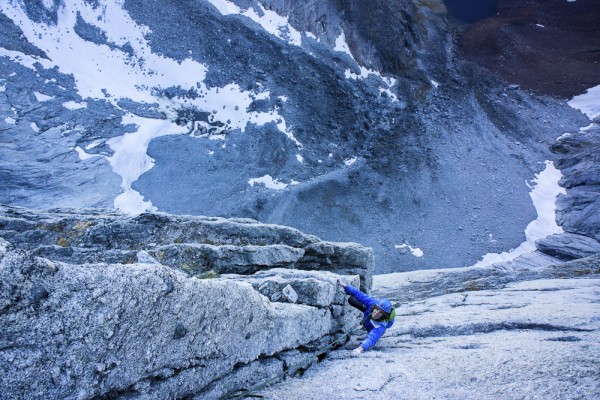 Katie on on the ascent

As we huddled together at the anchor pulling our ropes, they became snagged. They would not budge.

We pulled harder. We flung them around, hoping they would cut loose. Nothing, except a general feeling of devastation. We looked at each other, we looked above. Surrounding us was darkness, our headlamps only illuminating the immediate space around us, their light disappearing up the wall. We could just make out the blue and green pattern of nylon snaking its way up and around a series of ledgy flakes about 50 feet above and to the right. We had never really had trouble descending here before, but now it appeared our ropes were wrapped up in this mess. We were stuck up there in the dark, in the water, our friends asleep at base camp, the rest of the world hundreds of miles away.

We had two options: One of us could re-climb this soaking wet pitch and possibly sort out the stuck bits of rope, or we could cut the rope and continue with whatever was left. It was around 1am, we were tired, we were cold, and neither one of us could muster the psyche to go back up. We went for option two and out came the knife. The sharp metal cut through the rope and we hoped for the best as it sprang upwards and vanished. Down came a pile of cord at our feet consisting of one full 70-meter rope and what turned out to be only about 50 feet worth of the other line. Tying the two together would be useless — we would be better off using the one 70-meter rope. Relieved to be done with the stuck-rope scenario, we proceeded with our descent. 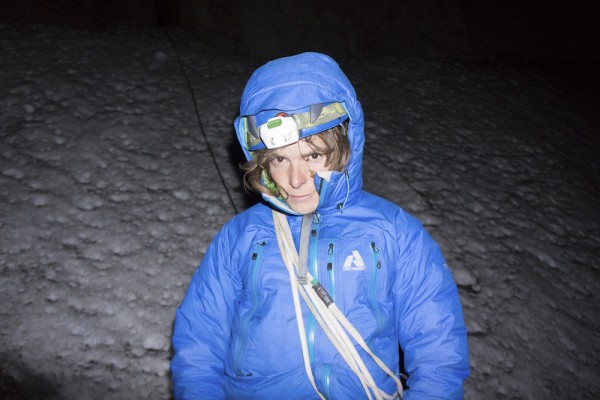 Cold and exhausted after a harrowing descent in the dark

However, our line wasn’t long enough to descend to the remaining three established rappels. Alarm came upon us. All we wanted was to be back in our tents with the promise of warmth and comfort. But, because our line wasn’t long enough to reach the rappel anchors, we had to build intermediate anchors, leaving some gear and webbing behind on the wall. This took more time, patience, and awareness. With bleary eyes and swollen fingers, we set about the next task of placing gear into cracks and fissures and equalizing them with webbing and finally attaching a carabiner to them so we could run the rope through it to descend. A simple task that is standard practice for us, but something that felt like quite a chore during our 17th and 18th hours of hanging around in harnesses, the pressure of which was cutting into our legs and hips, making our bodies scream for release from this wall.

The last 500 feet — something that should have taken about an hour — turned into five rappels in three hours. At the last rappel, too tired and weary to build and leave yet another intermediate anchor, we fixed our 70-meter rope to the existing anchor and used it as a single line all the way to the ground. Its full length stretched thin, giving us our final escape to the world below. Around 4am, we were finally back on the rocky ground. It had taken us six hours to get down. We stripped ourselves of harnesses and helmets, stretched our weary bodies, drank our remaining sips of water, and staggered down to camp with the moon-cast shadow of Mt. Proboscis to our backs.

The sun shone bright that next day — heating up our cold world. The excitement of our accomplishment kept me from sleeping too long that morning. I was proud of myself for having made the choice to be part of the expedition. We had become the second group in the history of the place, dating back to 1963, to free-climb Mt. Proboscis in a single day — a truly rare and unique experience. I was proud that I had been able to set aside all fear and worry about the what-ifs and unknowns and put myself out there.

Tagged
Climbing Northwest Territories, Canada Ambassadors
What did you think of this story?
Meh
Good
Awesome
✖
travelstoke
Download the mobile app
stoked by