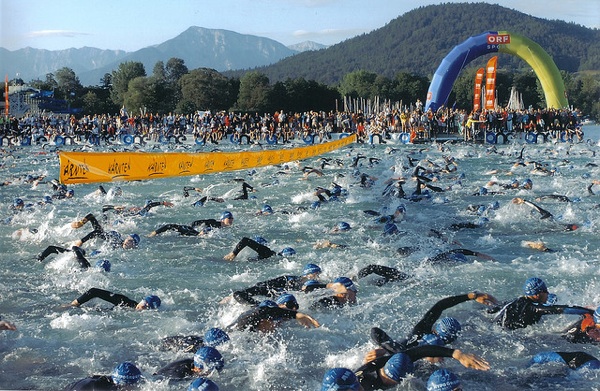 How traveling long distances for racing can be dangerous, and what you can do to prevent injury.

THOSE OF YOU who plan on making a long trek to Western Australia for your next Ironman or to New York’s upcoming marathon may want to think about extending your ticket by a few days.

Last week, ABC News reported the story of Chris and Tammy Lifka, a husband and wife pair of athletes who ended up under medical care after a recent race. Shortly after completing an Ironman and driving 17 hours from Colorado back to their home in Chicago, Chris, 41, began experiencing pain in his midsection, a condition that lasted a several weeks. After coughing up blood, he was admitted to the emergency room, where doctors determined he had blood clots in his lung.

Tammy, also in her forties, had fallen off her bike during a race, and after finishing, piled into the car for the ride home. Her leg began to swell, and she noticed how heavy her arm was feeling. Both conditions were attributed to clotting in her bloodstream, her doctors suspecting it was the ride home in addition to her fall that was the cause. 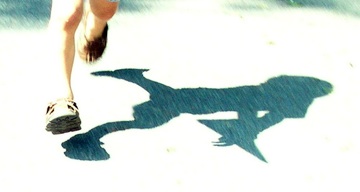 Both Lifkas are in tip-top shape and are not the usual case studies when it comes to the condition known as Deep Vein Thrombosis. DVT occurs when a blood clot forms in one of the body’s deep arteries due to lack of circulation, and typically in the legs. Clotting can cause permanent damage to the effected limbs, and if the clot travels to the lungs, like they did in Chris Lifka, the resulting pulmonary embolism may be fatal.

In addition the blood that Mr. Lifka experienced, travelers should look out for breathlessness, dizziness, chest pains or a quickened heart rate as signs of pulmonary embolism. (The first stages of DVT in the limbs are characterized by painful swelling, discoloration, and heat at the site of clotting.)

Travelers usually hear about the risks of DVT when on long flights–hence, all those airplane pamphlets with the silly cartoon characters doing squats and ankle rotations. There’s a common misconception that only the elderly, the obese, and others with poor circulation are at risk for the condition. The truth is that anyone can get DVT, and long periods of inactivity, whether driving or flying, restricts blood circulation and increases its likelihood.

Combine traveling great distances with having just pushed your body to extreme exhaustion–after creating microscopic tears and fractures in muscles and bones, which sets off natural blood coagulation–and even top-notch athletes have something to think about. Combine this further with the inevitable dehydration that slows blood circulation, and the competitors have something to really worry about. For Tammy Lifka, a minor spill off her bike added a light trauma to the mix, increasing her risk of clotting that much more.

For athletes, it might be the post-event where the risk is greatest. This is because right after all that exertion, blood pressure drops along with most body functions. Many racers can attest to how locked up they get after crossing the finish line. It is that immobility that interferes with normal blood flow throughout the body, causing blood to almost “gel.” 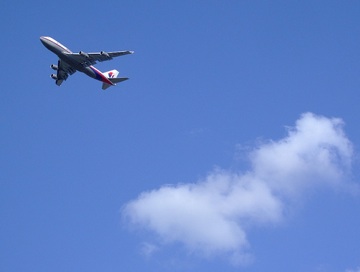 By sitting down for long periods after that and putting pressure is put on major leg arteries, causing blood to accumulate in other parts of the body, the condition drops into a downward spiral.

Of course, there are a few precautions that can help minimize the risks of DVT in traveling athletes. The below section, however, should not replace medical advice or the self-monitoring that should be part of every athlete’s recovery regimen. Just remember, if it feels wrong, stop:

1. Hydrate during and after the event. It is common knowledge that hydration is one of the most important factors in performance and recovery. When it comes to DVT, it could be potentially lifesaving by flushing the blood and bringing back normal circulation. Monitoring your urine color for a full day after the race will help you ensure that you are getting the fluids you need.

2. Stay mobile immediately after the event. Making sure that you don’t fall to the ground or allow your body to lock up after the event can seem inconceivable after a grueling race. But when it comes to DVT, it’s important to keep the tissue active by walking around or some light dynamic stretching to allow blood flow and the heart to return to normal functions at a natural pace. 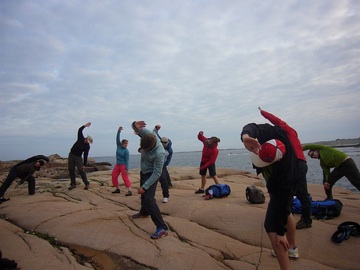 3. Hold off on immediate long-distance travel. If you can extend your stay after a competitive event even for one day, it can serve the purpose of allowing your body to recover. This may be impossible with busy schedules which is why hydration as well as doing some exercises, provided below, are very useful.

4. Exercise during distance travel. Below are a few yoga-influenced moves that can be done during your trip:

– Hip and ankle stretch: While sitting, cross the right ankle over the left thigh. Inhale and then exhale will folding over at the waist. Take 10-15 long breaths there before switching feet.

– Sciatic nerve and hamstring release: While sitting, take one big inhale, and then exhale all your air out. Squeeze your sit bones and navel in and hold for 15 seconds.

– Seated twist: While sitting, lengthen your spine and inhale. On an exhale, use your arm rest to twist the torso to the right. Hold for 10-15 breaths before switching sides.

– Warrior II: If you can stand up, take one big step so your legs are in a straddle. Bend the right knee to 90-degrees, and straighten the left. Extend arms to your side and look over your right hand. Squeeze the fingers and rotate the wrists while maintaining the pose for 1-2 minutes. Switch sides.

– Forward bend: From a standing position, extend your arms overhead and stretch up, coming to your toes if you can. Hold for a few breathes before folding forward over your legs, bending your knees to increase mobility. Hold for 1 minute. Repeat 2-3 times.

Still want to start long distance running after this article? We can show you how to become a road warrior.

How to plan for 2021 travel in the age of COVID, according to 23 travel agents
How to choose between an RV or van for your next big road trip
Everything Americans need to know about traveling to Mexico right now
I felt safer traveling to Aruba during the pandemic than I have in the United States in months
The best stops on the Blue Ridge Parkway