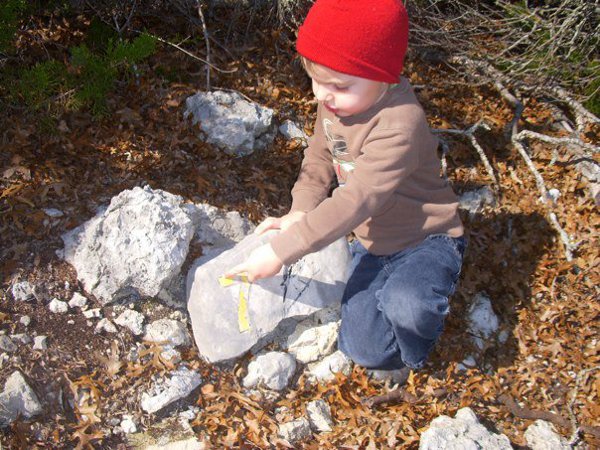 Andrew kneeling at Marker 7. All images by Becky Sampson

Lindi Horton finds something less ordinary when hiking with a child in Texas’ Warbler Vista.

But unlike those other parks, the 3-mile hiking route at Balcones Canyonlands National Wildlife Refuge, Warbler Vista’s longer name, is a five-minute drive from my home outside of Austin, Texas. And it was finally on a recent spring hike with a four-year-old named Andrew that I began to appreciate what was always in my own backyard. 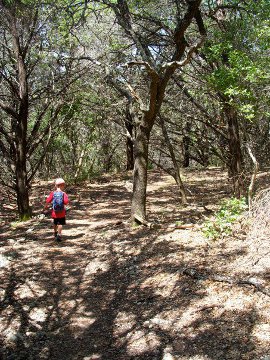 Andrew’s parents, my friends Jim and Becky, had picked me up early to visit Warbler Vista. We stepped from the sunny parking lot into the trail entrance upon our arrival, where a tree canopy protected us from the Texas sun.

We walked single file leading to the trail, the signs for the 19 markers appearing to be freshly updated, which the illustrated park pamphlets also indicated. By Marker 4, we took our first break.

Learning from previous trips, Andrew’s parents and my friends, Jim and Becky, had devised games when taking their son hiking to help keep the momentum going without exhausting him.

Jim would usually carry Andrew in his backpack half the time as we counted in Spanish and English. This time, Andrew had developed some endurance, but still required frequent stops, often involving food.

Jim drew a package of string cheese from his bag, which Andrew quickly consumed. By Marker 9, he wanted another snack, so we paused, and I noted to myself to always remember snacks when hiking with kids. 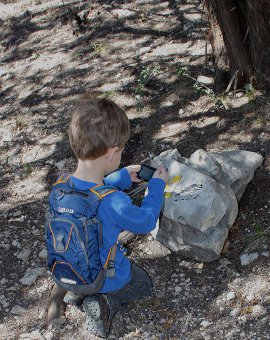 I looked around me. An ice storm in 1997 had uprooted a large oak tree, creating a canopy gap, which marked the ninth stop. Beyond the trees, the opening revealed Lake Travis and Lago Vista, and seeing them from this angle reminded me of how far we seemed from the city.

Grasses and scrubs had filled the gap left by the uprooted tree, the pamphlet pointed out. The path wound into a ravine. Cacti grew straight from rocks giving the trail its name, the Cactus Rock Trail, which was also home to the endangered Golden-Cheeked Warbler and the Black-Capped Vireo.

Andrew insisted on learning the call, whose cadence made it sound like, “Please, please your teacher!” It felt strange to say it, but as we repeated it, it began to feel more natural. We walked the trail repeating the song, beginning to enjoy it. We stopped again, this time listening for a return call to little success, with only the chirping of other birds filling the silence.

As we rounded Marker 15, we finally heard the return call. We stopped again to listen, this time surrounded by cherry bud clusters scattered around the ground. I picked up one of the shells and rolled it between my fingertips. I threw it back into the woods, hoping the fruit would provide some food for the deer or birds. 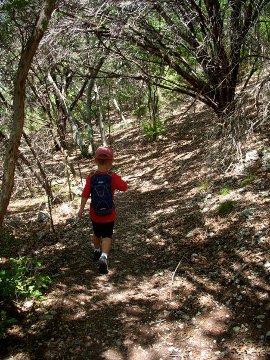 Andrew off for a hike

Those thoughts were interrupted by the sight of a man precariously perched on the hillside, while cleaning Marker 19. A blanket protected him from the rocks and twigs below him, but it didn’t prevent him from sliding down the hill.

“Thankfully, this is the last one for 10 years,” he laughed, as he etched the outline of a bird and the number into a rock with a scalpel.

His name was Jerry England, and as Andrew squatted next to him, he explained how he was a designated friend of the refuge and how he had illustrated the pamphlets we had been using. He flipped over a trading card he had modified into a paint pallet, mesmerizing Andrew as he painted Warbler’s beak in the marker with shiny, black paint.

We all watched quietly this man, someone who I was sure I had passed before, take the pride in work. It was work that had allowed me to enjoy this hike–and not become lost during it–for the years I’d been living outside Austin, and I felt instantly grateful.

We approached the final bench along the trail. Andrew attempted to sit on the bench as it teetered over.

Jim sat his Camelbak down. Opening it, he offered Andrew a variety of snacks, pulling out sandwiches, nuts and more string cheese.

There were endless options, and we sat together while he made his choice and found immediate and simple satisfaction. It was a similar feeling that I had as we left the park, the sun dipping into the horizon. It was the first time I was reluctant to leave Warbler Vista, and the first time I had wondered why I had ever found this place to be so ordinary.

Check out how to get fit in the Great Smoky Mountains on mSports.