TEVA has teamed up with Matador’s global community of outdoors fanatics to show you how to escape to adventure in 12 cities across America. In addition to the article series, we’ll be running an ongoing photo contest. Send us a photo of yourself adventuring abroad or in your back yard and you might win a free pair of new TEVAs.

Lying smack-in-the-middle of Tennessee, the Music City is just three hours from both the Mississippi River and the Appalachian Mountains. But Nashvillians can find plenty of adventure escapes at home in the Cumberland Valley.

Escape Time*: 20-30 minutes
Payoff: 25 miles of nature trails approaching the rocky banks of Percy Priest Reservoir, where you can cast a fishing line for bass or catch some solitude by skipping rocks off the glassy lake

Long Hunter State Park was always my go-to spot on Sundays for nursing hangovers with some quiet hiking. It’s a quick drive southeast of the city–not at all overused–and worth visiting during the warmest or coldest months.

Like many of Nashville’s best outdoor locations, it’s situated on the J. Percy Priest Reservoir, where fishing, swimming, kayaking, and sailing are all easy options.

A favorite part of Long Hunter is its expansive rocky lakefront with stones varying from bench-size boulders to pebbles.

A great trail in the park is the Jason Allen Arboretum Trail at Couchville Lake that winds throughout Tennessee’s first certified arboretum. The hard-surfaced path is free of barriers and includes stencil drawings of each tree species, essentially creating an open-air tree museum.

Unlike most arboretums, where trees are planted for the sole purpose of creating a forest of diverse plantlife, these trees were already growing naturally around Couchville Lake.

Escape Time*: 5-10 minutes
Payoff: The best view in the city from the highest point in Nashville

Most Nashvillians know about Love Hill, the city’s highest “natural” point that’s been giving couples panoramic views of the city for decades. What most don’t know is that it’s actually a grass-covered water storage reservoir, and that it’s also one of the best routes for a quick, intense hill climb whether you’re walking or jogging, as the Love Circle road that winds up is also a circular track.

Love Hill’s summit is a place you’ll remember, one of few in Nashville where you can take in the contrast of the ever-under-construction skyline and the distant forested hills of the Cumberland Valley. During the Fourth of July, this is easily the best spot to watch Nashville’s epic fireworks show.

Escape Time*: 30 minutes
Payoff: Over 100 miles of streams along one of the Cumberland River’s main tributaries, just 25 miles west of the city

One of the best things about kayaking or canoeing on the Harpeth River is that put-in and take-out spots can easily be within walking distance of each other. I recommend parking at your take-out spot, but it’s up to you.

The disastrous flood of May 2010 has closed a few put-ins, but as the Harpeth stretches for more than 125 miles, it shouldn’t be hard to plan a route for any kind of float. Check out the Lower Harpeth Blueway Map — you can buy a waterproof version for $5.

If you live in Tennessee, odds are you’ve experienced whitewater rafting, but even if not, you’ll be fine running the Harpeth’s Class I and II rapids. This is a relaxing escape you can make any weekend year-round. A few historical Native American sites can be found along many parts of the river, as well as the immense Mississippean burial ground of Mound Bottom in Harpeth River State Park. 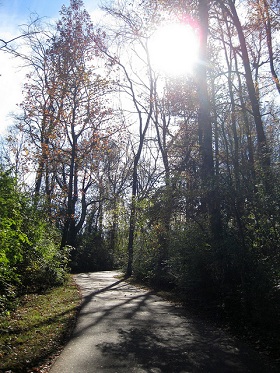 During the first half of my college career, no one was hyping East Nashville. But by my senior year at Vanderbilt University, it had become the new home to most of my favorite young professors, and Five Points was a VandyBubble escape and Rosepepper first date spot. If you can hold the door (and your tequila), it’ll be a good night.

If you haven’t yet acquainted yourself with East Nashville, Shelby Bottoms is a good place to start. It’s the most convenient urban park in Nashville in addition to being the largest, located just northeast of the city center. If you’re in the Vanderbilt area you can make a perfect 90min round-trip ride from campus to the park’s riverfront greenways.

Once you’re there, the trails are flat and wind through the park that opened in 1909 — this is not a repurposed urban zone — and you’ll pedal along the river and under train track trestles.

*Estimated travel times do not include traffic delays

Adventure had, check out Nashville: Get Your Honky-Tonk On.

39 of the most breathtaking natural wonders in the world
Flights to nowhere are growing, and they’re an insult to the planet
Stay overnight in a fire lookout tower for a sky-high wilderness escape
David Attenborough joins Instagram and gains millions of followers in just one day
Video shows the terrifying moment a massive iceberg flips over on two ice climbers
✖
travelstoke
Download the mobile app
stoked by