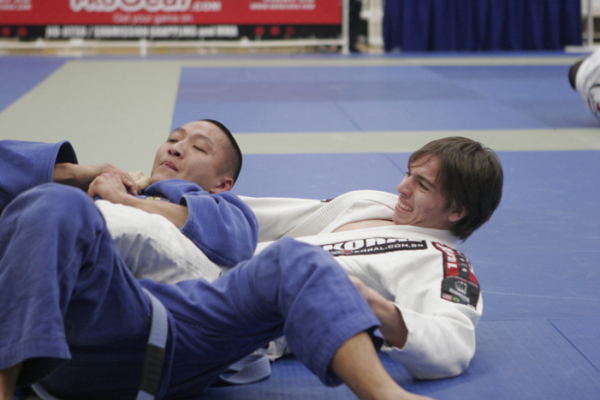 BEFORE I CAN BLINK, I’m lying flat on my stomach with Jairo smushing my face into the mat with his forearm. His fist pins my hand behind my back. I try to move, but I cannot, not even a little.

“This is not a good position for you,” he says. “If I want to, I can finish you now.” I quickly remind myself of what Jairo told me before we began the lesson–that he is a spiritual man, a man of God. I’m grateful when he lets me stand up again.

I’ve come to the island of Santa Catarina in southern Brazil to study with Jairo Teixeira, a master of Brazilian Jiu-Jitsu. I always wanted to know why the Brazilians have their own national version of a Japanese martial art. After all, Japan is on the other side of the world. How did Brazilian Jiu-Jitsu become so popular?

As we sit on the mat during a break, Jairo, a big man with cauliflower ears, a toothy grin and green eyes, explains it all it to me. 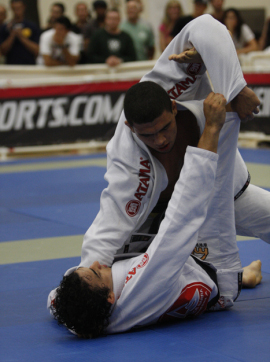 Brazilian Jiu-Jitsu was invented by Helio Gracie, a skinny boy who lived in Rio de Janeiro. His family had learned the secrets of Japanese Jiu-Jitsu from a Japanese master named Mitsuyo Maeda, who went by the ring name of Conde Koma.

The Gracie family taught Jiu-Jitsu in Rio, but Helio was forbidden from fighting. He was too weak, too fragile. Then one day, a man came for a private lesson. The regular teacher was late, so Helio, who loved to watch his brothers practice, taught the man.

Afterward, Helio became a regular teacher at the academy. Through patient experimentation, he adapted Japanese Jiu-Jitsu for self-defense on the streets of Rio.

Today, many consider Brazilian Jiu-Jitsu the most efficient way to neutralize a real attacker. It allows you to fight from the ground, to turn a weak position into a strong position. Brazilian fighters now regularly win mixed martial arts competitions on the world circuit.

The break is over and we grapple again. I try to throw Jairo. “No, no,” he says. “Relax. Your body is too tense. When you fight, you have to keep your body loose. When you are tense, you stop thinking. This is how you defeat yourself.”

Later he showed me how, if you can maintain your composure under attack, you can use the opponent’s strength against him. “People are afraid to clench,” he told me, “they are afraid to take on their problems close-up. But in Jiu-Jitsu, we learn to grapple with our enemies at close quarters. The closer you are to your enemy, the more protected you are.”

I straddle him again and Jairo effortlessly rolls me over onto my back. I try to stop him, I really do, but I’m powerless in his hands.

After practice, we sit in a café together, talking. I ask him about how his spiritual life twines with his martial art. “When I started Jiu-Jitsu, I was afraid. I felt like a dead chicken,” he says. “But I didn’t give up. Suddenly, I wasn’t afraid anymore.”

He smiled his toothy grin one more time. Brazilian Jiu-Jitsu had made another disciple.

What did you think of this article?
Meh
Good
Awesome
Bookmark
Posted In
Travel
Destinations
Rio de Janeiro, Brazil