View all travel news
Top Countries
Top CitiesView All Destinations
Trending Regions
Trending Cities
Load More
This Friday Fun is about an ad from South African airline Kulula that managed to rouse the ire of FIFA — despite not mentioning it or the World Cup by name.

THE AD, WHICH ran in mid-March, was part of a marketing campaign by Kulula that poked fun at both recent airline price-fixing scandals and FIFA’s strict control over the use of the World Cup name. It featured pictures of soccer balls, stadiums, and fans blowing vuvuzelas, with the text “Official National Carrier of the ‘You-Know-What’.”

FIFA’s response? Threaten Kulula with legal action if it didn’t withdraw the ad.

“They said we cannot depict the Cape Town stadium, we can’t use soccer balls, or the word ‘South Africa’, and the depiction of the national flag is not allowed,” Kulula marketing manager Nadine Damen said.

FIFA officials said the ad broke laws against “ambush marketing”, the practice of marketing a company as if it were related to an event it has not sponsored.

Soon afterwards, Kulula came back with another ad that “clarified” their complete lack of involvement with the W**ld C*p. Take a look: 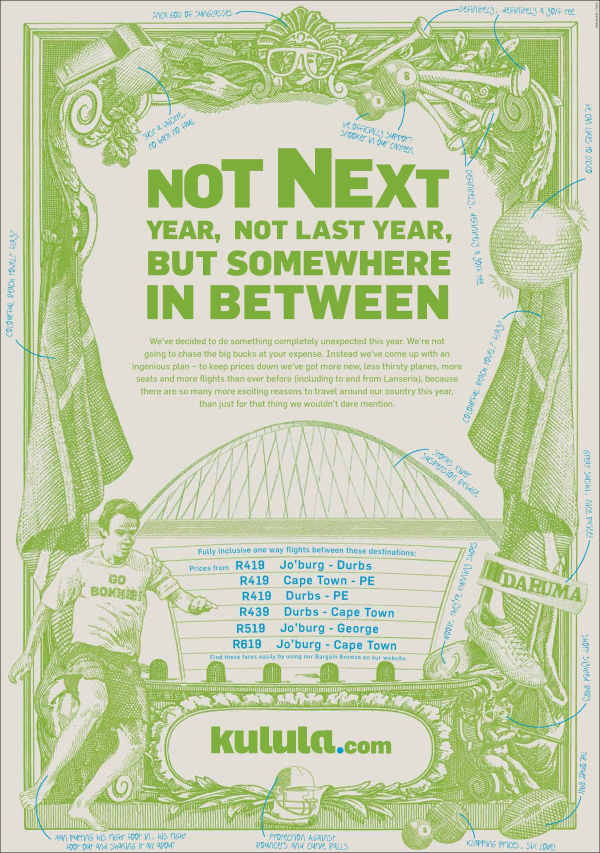