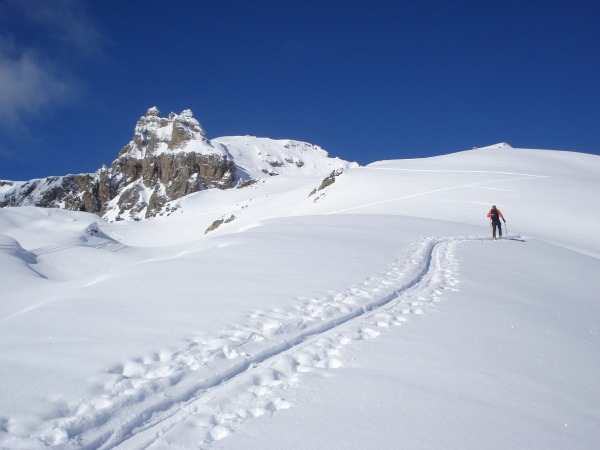 Nikki Hodgson ponders personal growth and her love affair with a new pair of skis.

The moment I get home, I pull my new Dynafit Haute Route Plus skis out of the bag, holding them at various angles in front of the mirror. I like the way I look. I am transformed into a braver, bolder version of myself. Someone who carelessly slings Dynafit backcountry skis over her shoulder after a weekend spent in the Alps.

I dump the remaining contents of the ski bag onto the floor. A pair of pale blue skins uncurl themselves at my feet. I pick them up and study them, the fur-like traction on the bottom. 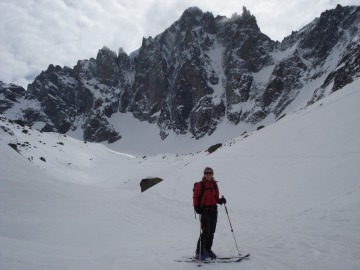 Ripping the paper off the adhesive side of the skins, I attempt to put them on. I dangle one skin a few inches from my ski and try to straighten it out. It gets stuck on my foot and I hop around with my ski in hand trying to pull the adhesive backing
free.

As soon as I free my foot, I set my ski down and step backwards directly onto my ski crampon. Whirling in pain, I knock my skis over. There is an unsettling crash, following by me swearing.

My best friend drops me off at the airport. It’s become something of a tradition. Every year we pile into the car at some ungodly hour and head to SFO, where I wave good-bye as I stand on the curb surrounded by whatever it is I’ve decided I can’t live without for the year. This time I’m moving to Switzerland, and despite not knowing how to ski, I’ve decided I can’t live without my ski gear.

My brand new backcountry skis are nestled in with my high heels and Banana Republic blouses I’ve managed to snag off the racks of various Berkeley thrift stores. My $15 dollar boot bag houses the Scarpa Magic ski boots I bought on E-bay. Various last minute items have been squashed in alongside them. A pair of socks, my favorite bra, the razor I almost left in my carry-on, a book of French grammar drills. I hand them all over to the United Airlines representative behind the counter. 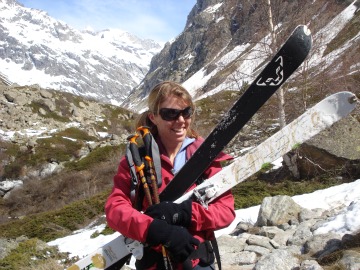 I spend the next few months scraping, skidding, and falling down snow-covered slopes in both Switzerland and France. I long to imitate the beautiful, perfect turns that my skiing companions so effortlessly execute.

My skis are beautiful, lightweight and marvelously constructed. I notice this while lying on the ground with one ski wedged underneath me and the other a few meters up the slope. The ski brake worked perfectly, stopping my ski within a few feet of
where I stumbled forward and continued down the slope like a starfish tumbling in the tide.

Stepping off the plane and back onto French soil I’m surprised by the gust of warm air that hits my face. I’m braced with too many jackets and my warmest boots, prepared for an onslaught of frigid alpine air that never reaches me. The heaters in the waiting room are on full throttle, attempting to shield passengers from a winter that hasn’t fully committed.

Pulling my skis out of the bag, I run my fingers along the shallow scratches carved into the base. Lasting evidence of the rocks I ran over last season. Despite the pathetic images of me bouncing and skidding unsteadily down various mountain faces, I’m eager to be back.

We pile into JéJé’s car, which we’ve affectionately dubbed the Moroccan taxi. Five people and their accompanying ski gear are crammed into the little red Renault with the broken doors. My skis are lashed to the top, my Scarpa boots are sitting in my lap.

We awake the next morning in our rented chalet. Three more friends have joined us. Eight pairs of skis, skins, and boots are strewn about the living room as we grab beacons, shovels, and avalanche probes, stuffing them into our packs alongside down jackets and chocolate bars. 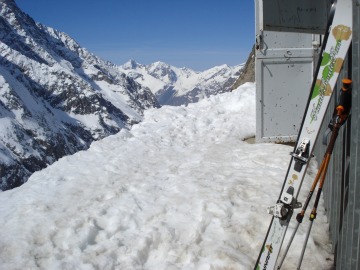 I line up the toe of my boot with the pins of my binding and snap in. Against the muted winter colors, the sky is bluer, sharper. Every sound is amplified. The crinkle of a granola bar wrapper, the lid of my water bottle slipping back onto its threads, the nylon of my jacket rubbing against my pack. The snow squeaks underfoot.

I can see the peak rising just above us. As the slope gets steeper I look only at my skis. This is what I remember from the climb. Brown and green flowers painted on my right ski, a map of Chamonix to Alagna scrawled across the left.

Two hours later we reach the top, my first summit on skis. I collapse into the snow and drink down the stillness, savoring a moment I first envisioned one year ago. Leaning against my pack at 2,800 meters with my skis in hand, I feel like a braver, bolder version of myself.

I scrape the snow from around my bindings then peel the skins off. The scratches in my skis no longer seem like testaments of failure. Like the pencil marks my mother used to chart my growth on the kitchen wall, my skis remind me of older vantage points, and the person I’ve grown into.

Learn more about our Gear as Memoir series.