“THE MAYANS believed that caves were the gateway to the underworld,” says my bearded and amicable guide as he leads me deeper into the forest. Dave “from the Cave” (as he likes to say), is wearing dirt-stained coveralls and a hard hat, the appropriate attire for someone who enjoys spending countless hours deep inside the blackness of the earth.

“Scientists say that only 10% of the world’s caves have been found,” he continues as we cross a wooden bridge over a river, slats creaking under our feet. “That means on Vancouver Island alone, there are hundreds that still remain hidden.”

Dave arches an eyebrow and pauses for dramatic effect.

I scan the forest, thick and dripping here in Horne Lake Caves Provincial Park. First opened in 1971, the park was formed to protect the karst (eroded limestone landscape) features and caves cut into the relatively soft rock beneath our feet. The caves were formed from the continuous flow of water seeping in through the cracks, shaping and carving for tens of thousands of years. The familiar stalagmites and stalagtites that define this underground realm are formed by dissolved calcite, built drip by drip.

“TWO OF THE CAVES in the park are already spoiled,” Dave says. He explains how decades of explorers trampling through the underground has contaminated the calcite, transforming sparkling crystal waterfalls faded mounds of the color of clay. “We still allow visitors in those on their own. But the real beauty is Riverbend.”

We continue on the trail until reaching an opening in the earth. A shaft of sunlight breaks through the trees, revealing the mysterious entrance to the park’s star attraction. Dave lowers himself down, using all limbs for support, strongly resembling Gollum, the cave-dweller from Lord of the Rings.

“He was the ultimate caver,” Dave responds when I mention the similarity. As I step down to the gate that blocks the ladder into the depths, I utter a quick prayer for the battery life of the only “Precious” down in the dark: my headlamp.

Dave retrieves a set of keys from his overalls and unlocks the gate. It swings open with the satisfying squeal, and he motions me to cross the threshold. I’m swept forward by tendrils of air that glide along my exposed skin, as if I’m stepping into a lung of the earth. There’s clatter behind me as Dave locks the gate behind us. He explains it’s just a precaution, to keep unguided visitors from following behind.

Somehow, it still makes me a little nervous. 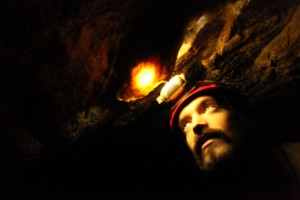 Dave illuminates the rock with this headlamp.

“We’re now in the Twilight Zone.”

AS THE THEME music plays in my head, Dave explains how this area of every cave got its name because it’s the last place light can reach before heading deeper into the depths.

“How do you know so much about caves?” I ask.

“My dad,” Dave replies. “He loves caves. I grew up exploring with him in Pennsylvania.” There’s a touch of nostalgia in his voice, as he reflects fondly on the memories. I wonder if perhaps a disagreement had come between them and if they’d grown apart over the years.

“Are you still close with your Dad?”

“No…” he responds. “He’s back in Pennsylvania.”

“Oh. I meant like… emotionally. But nevermind. What does he do?”

“Cave guide,” Dave says, matter-of-factly. “You ever get out that way, ask for Marty. He goes by the nickname: ‘Marty who likes to Party.’”

WE PLUNGE DEEPER into Riverbend Cave, our headlamps illuminating the path–over rolling shelves of rock, plodding through mysterious streams, shimmying into thin crevices only to open to echoing rooms.

“All of these caves were carved by thousands of years of water melting and draining into these cracks, slowly wearing down the limestone. This shows you the power of water.” Dave speaks with clear awe of the unfathomable geological forces at play.

We arrive at a pool of water, calm until the sound of our movement disturbs the surface. “Look closely,” he says, pointing at a mound of stalagmites on the far side of pool. I peer at the mound, uncertain what I’m looking for. “Now, look in the water.”

I see it easily: the mound now resembles an upside-down Buddha, serene and chubby. His features are worn smooth, but I can still determine the smiling face.

“Remember, this is the underworld. We disturb the spirits when we enter their domain.” Dave’s flashlight in his hand casts deep shadows on his face. “The Buddha here soothes the souls of the restless.”

After a moment of respect, we bow our heads, and continue onward.

AT THE MOTION OF Dave’s hand, we stop. “Here is good.” He reaches up and flicks off his headlamp. I do the same, and we’re quickly plunged into complete and utter darkness. In the distance, I can hear the echoes of a distance stream. The edges of the cave, which were discernible moments before, are now spatially impossible to sense.

I listen to my own heartbeat.

“After three weeks of total darkness, you lose the ability of your eyes,” Dave’s voice breaks the tension. “Your body just shuts them off. No need for’em.”

I imagine my life, abandoned in this blackness, unable to navigate the treacherous path back to the entrance.

“After a few months with no sun, your hair will turn white. Your body can’t make the pigment anymore.”

A sense of loneliness creeps into my bones. I wonder how anyone could stand a life in the caves, let alone make it their occupation. Here there were no creatures, no semblance of sentient life of any kind. Just cold, dank, bleakness, stretching to the core of the earth.

I can’t see his face, but I picture him mulling the question.

“There’s a mystery down here. In these places that not many people get to see. I like to show them the beauty.”

I gaze around in the blackness, and for a moment, I sense what he means.

“My dad and I used to spend so much time in the caves. I really enjoyed that with him,” he continued. “In fact, you know what he told me one time? He said that’s the way we can keep in touch when he’s cave guiding back home. We can communicate with each other through the cracks.”

A white flash and suddenly Dave appears with his headlamp shining, a grin on his face.

Thanks to Horne Lake Caves for the experience. If caving isn’t your cup of tea, you can also try a kayak trip with Adventuress Wilderness Adventures. After a day outdoors, bonus points for relaxing at the Grotto Mineral Spa (thanks to Tigh Na Mara Resort for hosting me).

Tagged
Outdoor Hiking Trip Planning
What did you think of this story?
Meh
Good
Awesome

Kentucky Has Over 130 Caves. These Are the 7 You Don’t Want To Miss.
The 8 Best Rivers in Washington State for Salmon Fishing
Scuba Divers Just Pulled 25,000 Pounds of Trash From Lake Tahoe. Here’s the Wild Stuff They Found.
Nevada Is One of the Best States for Stargazing. Here’s Where To Go
5 States With the Most Scenic and Laid-Back Nude Beaches

5 Things You Should Definitely Do on Your Next Trip To Parksville, BC

Hiking Taboos: 9 Things You Should Never, Ever Do on the Trails