I have to say, I had the best seat in the house. I rigged a portaledge opposite the steep wall, and could watch climbers battle up the routes and observe the milling spectators. I was watching and photographing two days of the SCS Open National Championship, which is meant to sift out the strongest four men and women, who would later join the US Climbing team and compete together on the international climbing circuit. 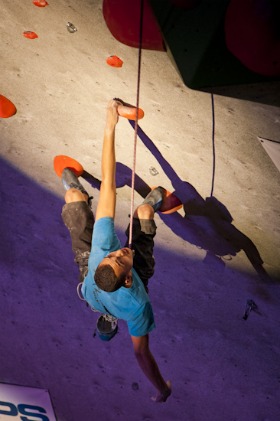 The top six men and women would be eligible to compete in October’s IFSC Lead World Cup, also held in Boulder, and would hopefully build the United States’ reputation for strong sport climbing, one that has always lagged behind the Europeans’.

The only one downside to my birds-eye view was that I couldn’t move. Not only was I unable to roam the floor with my camera like I normally would, Friday night I was stranded in the rafters for the five hours of qualifiers. Luckily, someone sent up water.

On that evening, 19 women and 33 men faced a qualifying round of two “difficult” sport routes that meandered up the longest, steepest wall at Movement Climbing + Fitness. Each competitor had seven minutes to climb the first route, one minute to rest, and then seven minutes to climb the second route. Over 200 spectators came to witness the nine women and twelve men who would make it to finals.

On Saturday night, that elite selection tested their strength on final routes for each of the men and the women. High schooler Sasha DiGiulian, whose boyfriend was men’s team favorite Magnus Midtbø of Norway, and who has climbed the hardest routes of her career in the past several months, recently joined the elite group of women who have climbed the difficult grade of 5.14c. 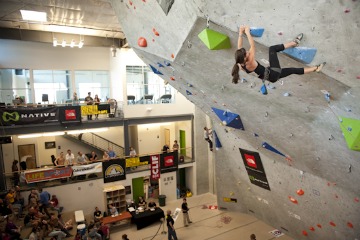 She breezed through the two women’s qualifier routes, as well as the women’s final route landing the number one spot, with local Paige Claassen close behind.

DiGiulian was ecstatic after winning the competition. “Prior to this, I was climbing at the Red River Gorge for nine days and then only trained in the gym for two days,” she continued with a huge smile. “These routes were very different from the style at the Red. The finals route was really well set. I didn’t even feel pumped!” 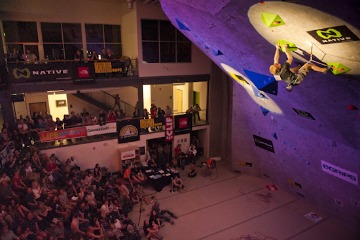 The men’s field was closer. Boulder local Matty Hong and Californian Carlo Traversi outclimbed Midtbø on the finals route, but with the cumulative scoring, Midtbø emerged the winner.

Speed climbing was more laid-back, but still competitive. Spectators listened to Guns n’ Roses’ “Welcome to the Jungle” while the climbers, many of whom were in the final difficulty round later that evening, joked around and took turns seeing who could scale the wall fastest. For the women, world speed climbing champion Dana Riddle took first, then Amanda Sutton and Delaney Miller. For the men, Alex Johnson snagged first, Joshua Levin and Mark Puccio, respectively.

Behind the scenes, USA Climbing Director of Operations Kynan Waggoner and a team of hard-working route setters led by Chris Danielson strove to create routes that would perfectly separate competitors by skill, but still demanded power, endurance, and outstanding technique. 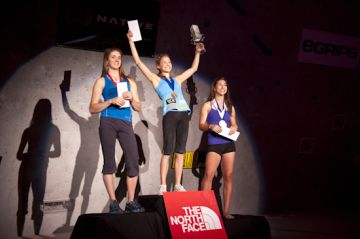 “On the whole, it went really well,” Danielson said. “We had to space out the top five guys at the headwall, and the wins were within tenths of a point. It’s exciting. And for the women, clearly the best climber won, so I’m happy with it.”

I also can’t complain. In addition to watching some fierce competition with a perfect view, I got some pretty rad shots.

Check out Caroline’s photographic coverage at the American Bouldering Series on Matador Sports.

Check out Lucid Dreaming versus the Game: The US Hardest Boulder Problems Compared for interesting data on US bouldering problems.