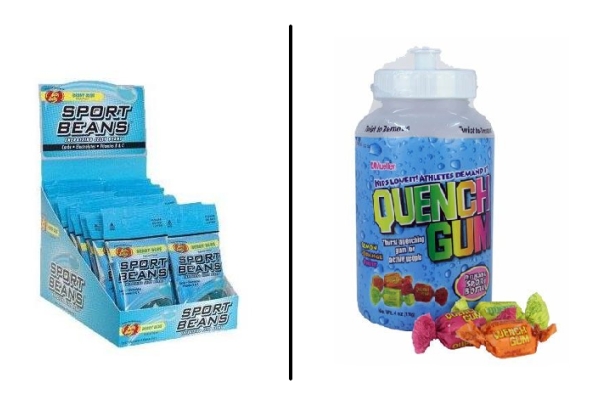 We put our sweet tooth to the test with these high-performance confections.

I’ll just come out and say it: my idea of high-performance sport nutrition has never involved candy. Vegetables, whole grains, protein – all of those things. Gum and jelly beans – not so much.

Enter Quench Gum and Sports Beans, two candies that pledge to improve performance by providing athletes with the vitamins and minerals that they need to function.

It sounds like something too far-fetched even for Willy Wonka, but both products claim to have science on their sides, as well as a stable of professional athletes who use their products.

We put Quench Gum and Sports Beans to the test, taking them first to the football field and then to the tennis courts, to find out whether they could deliver.

Quench Gum has been around for over 30 years, so it’s not really anything new. Created and marketed by Mueller Sports Medicine, Inc., Quench Gum’s pitch is that it supposedly helps eliminate the sensation of thirst in athletes, though it doesn’t actually prevent dehydration.

The gum has an equally long history of use by professional athletes. According to the Quench Gum website, the Harlem Globetrotters were Mueller’s first customers, buying $90 worth of the gum at a conference. Today, Quench is the official gum of the MLB’s Milwaukee Brewers.

Quench Gum is available at most major sporting equipment stores, in chunk and stick form.

The Verdict: big thumbs down.

Our testers found very little to like about Quench Gum. For starters, it’s difficult to chew. When first unwrapped, the chunks are like rock. It takes some serious jaw work just to get these pebbles started.

Then there’s the lip-puckering sour taste. Which would be a bigger problem if the gum didn’t lose its flavor after about a minute.

The kicker is that Quench Gum didn’t really do much in the way of relieving thirst. In fact, some people who tried the gum said that it made them feel even thirstier. By the end of the test, some participants were turning down the gum outright.

Sport Beans, made by jelly bean colossus Jelly Belly, are a relatively new concept. The premise is that the beans, which contain a mix of vitamin B, vitamin C, electrolytes, and carbohydrates, boost blood sugar levels and fuel muscles to provide maximum power output during exercise.

As evidence of Sport Beans’ effectiveness, the Sport Beans website contains a copy of a study by the University of California Davis Sports Medicine Program indicating that the carbohydrates in Sport Beans are about as effective in boosting performance as other comparable supplements.

The Verdict: thumbs up.

We’ll be honest: eating these beans didn’t make us into Olympians. But they were pretty delicious.

While the jury’s still out on whether Sport Beans do much for athletic performance, the extra-large pieces were everything we could want in a jelly bean. The beans were big, juicy, and a little less chewy than their conventional cousins, and the single-serving packets stowed conveniently in shorts pockets.

All in all, a good candy.

And the winner is…

Sport Beans, all the way. While the performance-boosting claims of both candies were dubious at best, Sport Beans’ superior taste and convenient packaging won them big points with our reviewers and ended up taking home the candy crown.

Sports jelly beans? Thirst-quenching gum? Something even weirder? What’s the oddest sports supplement or gadget you’ve ever tried? Sound off in the comments section below!