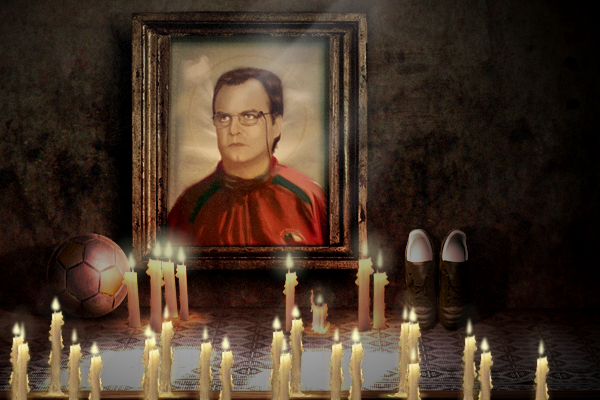 Chile has fallen hard for Marcelo Bielsa, the Argentine-born coach who on Saturday led the country in qualifying for its first World Cup is 12 years. President Michele Bachelet has praised Bielsa as “an example and role model for young people”, while model Pilar Jarpa has even called him a “sex symbol.” A recent poll in El Mercurio newspaper ranked him as Chile’s best trainer ever.

Now, two fans have taken the praise a step further with PrendeleUnaVela.cl, a website that asks the Vatican to canonize Bielsa as the “saint of Chilean soccer” and asks visitors to show their devotion to “San Marcelino” by lighting 100,000 virtual candles in his honor.

The idea of Bielsa as a saint may seem rather silly (though definitely more plausible than the image of him as a sex symbol), but the campaign has caught fire, with 66,479 candles lit as of Tuesday.

Besides lighting candles, visitors to PrendeleUnaVela can download worship-ready images of Bielsa, complete with red tracksuit and halo, or offer tongue-in-cheek prayers to “San Marcelino” asking him to bless the selection on the field.

“Glorious San Marcelino, powerful protector and savior of Chilean soccer, at your feet I lay bare my spiritual and sporting necessities,” begins one petition. “Throw your gaze of goodness upon my Chilean heart so that my soul might experience triumph. Amen.”

In return for all this veneration, the site asks Bielsa to prove that he’s worthy of sainthood by performing the “Three Great Miracles” of Chilean soccer: qualifying for South Africa 2010, advancing to the second round, and winning the tournament.

After Saturday’s 4-2 victory over Colombia, Bielsa can call the first miracle done. The two that remain may be a bit trickier: Bielsa’s one trip to the World Cup, with Argentina in 2002, ended with his team being eliminated in the first round. If he took Chile to the second round, it would be his best result yet.

Still, co-creator Felipe Abufele says that he has faith.

“He’s the only one who has made Chile good with the ball, and that’s a miracle, the unrecognized first one,” he said.