ON MY DAILY skate to the Sakanat metro stop, I feel very far from California. When I skate through Ma’adi, one of the greenest and most affluent suburbs in Cairo, Egypt, jaws drop. Much like Dogtown’s Z-Boys–the Santa Monica skate crew who took boards to the streets and revolutionised skating culture–I get a good dose of incredulous looks as I thunder down the road.

If they knew I was on my way to tutor their children, the sons and daughters of the Egyptian elite, they’d do what most do when disbelief is piled on that type of incredulity: they’d bust out laughing. I could easily join them too because for a guy like me, someone whose life was changed in 1987 by a single skateboarding scene in “Police Academy VI,” to end up on a scholarship in the Middle East at a major university, how could I not?

On my daily skate to the Sakanat metro stop, I feel very far from those early days in my garage in Anchorage, Alaska when I tried to teach myself the tricks I’d seen on the big screen and dreamed of California, my last stateside home before coming to Cairo.

Instead of the sunbleached blonde girls I’d come to know, I see women whose eyes are lined with black kohl and whose veiled hair is modestly pinned in place. Instead of the ubiquitous baseball hat and board shorts, that unisex uniform in California, I see turbans and galabayyas, the floor-length gown worn by both men and women. 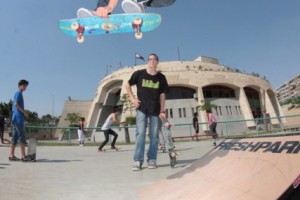 IN OVERCROWDED Cairo, the competition for space is fierce. Rattletrap Fiats, bicycles, scooters and rickety Peugeot taxis battle noisily for their share of the road. Dilapidated minibuses scramble around the city’s arteries, unrepentantly belching noxious smoke.

They whiz about the roundabouts, where Egyptian families often picnic on the circular patches of grass. Two lanes often end up accommodating five cars. Passing on either side and driving down the middle of the road is perfectly acceptable and triple-parking in downtown is the norm. Skateboarding in Cairo is definitely an extreme sport.

Some Cairenes smile at my skateboarding acrobatics, give me the thumbs up or even yell, “Meya, meya!” (literally meaning “100! 100!,” but translating as something close to “Awesome!”) as they sip their shai (tea) or puff on their sheesha (water pipes) in the city’s endless cafes.

Others get scared and shoo me away. Some picnickers and passengers turn puzzled faces as I skate by. With petrol this cheap, why would anyone be pushing himself around? More warn me that I can’t “play” there anymore. One time, after I ground my way across some grimy marble stairs at the metro stop, a stout, matronly woman in a veil waddled up to me, wagged her finger and yelled in English, “This is Metro, not club!”

Despite the occasional scolding, there’s something exhilarating about freewheeling my way through all this mayhem. And here are five of the best places to get onboard.

If it’s not being occuppied nor the revolution televised when you arrive, grind the pink granite benches and sail across the silky-smooth surfaces in front of the Mogama (a Kafka-esque, bureaucratic behemoth of a building across from the American University). A crowd of curious (and vocal) onlookers is guaranteed. For a true “Vanilla Sky” moment, come during Ramadan and show up here just before iftar (the breaking of the fast): you’ll have Egypt’s Time Square all to yourself.

If you’ve got the wherewithal (and good travel insurance), ollie the double set of stairs in the hotel’s rear arcade where knee-high ledges abound and opulent marble walls await for your nose-sliding and wall riding pleasure. Watch out for the security forces here though. If you wake them from their normally sonambulant state, they can sometimes be less than amicable. 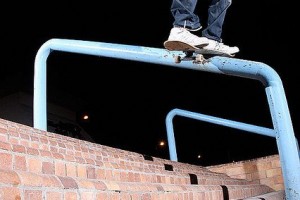 Homesick for the anonymity of the California streets? With the highest number of expat skaters in Cairo, resigned acceptance from the locals and the only mini-ramp in town – Ma’adi, a well-to-do tree-lined suburb, feels about as close to the U.S. as you can get this side of the Nile. For the exact whereabouts of the mini-ramp, a four foot tall, eight foot wide plywood playground, check out Sk8boarding in Cairo.

Paranoia has worked in our favor here. There’s a five-block radius closed off to traffic; local businesses suffer, but skateboarders can session here without the ubiquitous fear of being mowed down by a Peugeot. Smooth blacktop streets and zero traffic equals a flatground haven (a rarity in overpopulated and densly packed Cairo).

Skate across this 1930s bridge from downtown into Zamalek (Cairo’s version of New York’s East Village) and partake of a Cairene ritual: the Evening Promenade. If you just so happen to have met your own Anthony or Cleopatra, take him or her here after a good skate sesh for the views of the major downtown landmarks and a Nile cruise on a felucca decked out with disco lights and blaring Arabic pop music.

Author’s note: Tap into the Cairene and Alexandria skate communities at SkateIMPACT.

Tagged
Cairo, Egypt
What did you think of this story?
Meh
Good
Awesome

Why You Should Travel To Egypt Right Now

May 1, 2012 Karen Dion
✖
travelstoke
Download the mobile app
stoked by