WESTERN SAHARA continues to witness one of the world’s most persistently ignored and legally unambiguous violations of human rights. Often referred to as “Africa’s last colony,” the country (it’s a country) was occupied by Morocco immediately after former colonial master Spain departed and has never seen freedom since.

The Sahrawi people, Western Sahara’s original inhabitants, live under a brutal police state in the country today, while hundreds of thousands who fled the occupation continue to wait in refugee camps in neighbouring Algeria for the day they’ll be allowed to return. Between those who fled and those who remain under Moroccan oppression lies a 2,500km wall and mined zone that makes the Korean DMZ look like its wall builders were lazy.

The UN agreed in 1991 that the Sahrawi people should have a referendum on whether to keep Moroccan rule or have their own state. Morocco, realising the obvious outcome of such a poll, has never allowed it.

The Sahrawi, for their part, have been trying to build international support for their cause for years through documentary films like Sons of the Clouds and bringing people to see the camps in Algeria and learn more about the history of their struggle. One part of this advocacy is the unusual marathon-between-desert-refugee-camps that is the Sahara Marathon.

I spoke to Mattie Durli, one of the organisers, to find out more about it.

RS: How did the Sahara Marathon come about, what is it, and how is it organised?

MD: The idea of the marathon was originally that of an American, Jeb Carney, who was involved with the Sahrawi cause and thought the race was a good idea to raise awareness of the situation in the Sahrawi camps and fund solidarity projects. Over time, more people got involved — mainly groups from Spain and Sahrawi institutional authorities and volunteers — but the first group of organizers was very small.

I came from Italy to participate in the first event, after which I and few others from other countries became more involved in the organization. Nowadays the two main solidarity associations that help organize the marathon are El Ouali in Italy and Proyecto Sahara in Spain, but we also receive assistance from volunteers in many other countries (I won’t list them because I would forget some…), who help us to promote the event, give information to participants from their countries, and even organize the trips to the camps. It’s a team job. 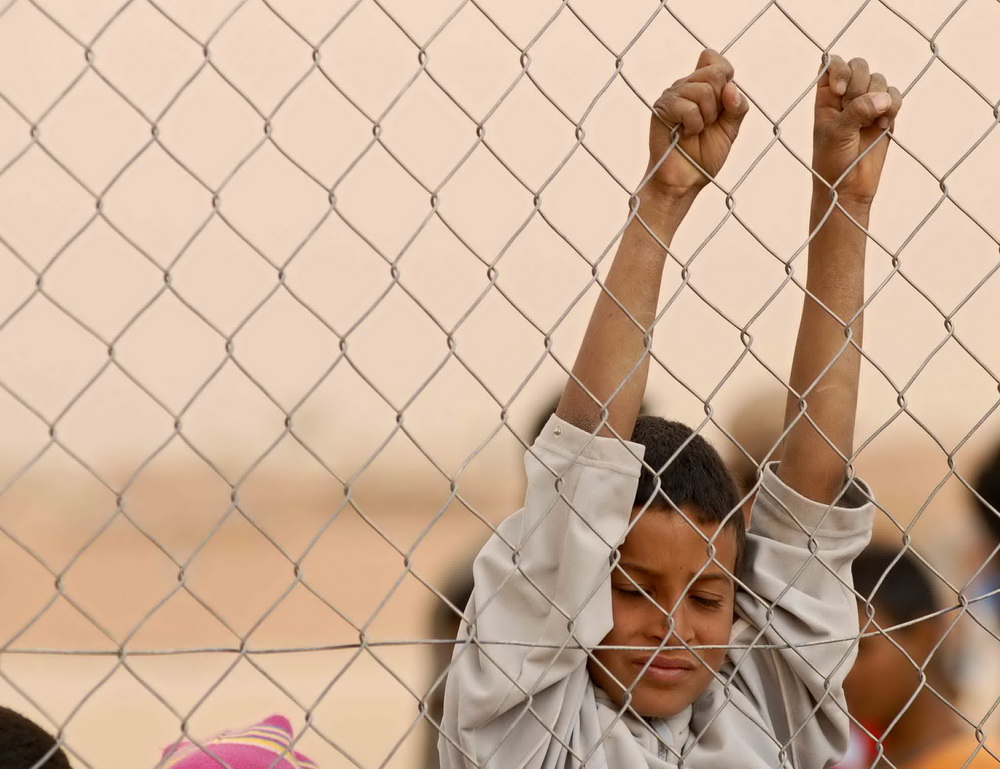 The basic idea is to bring people to visit the camps, for more than a quick weekend stay or to simply run a race. We want the participants to get to know the people and the place. For this reason, all the participants are hosted by Sahrawi families. Every family takes care of a group of 4-5 participants. They give them accommodation and food and pass time with them, trying to make this visit the most enjoyable one possible. The races occupy just one day in the overall schedule, but participants have 5-6 days to visit the camps, the schools, see the infrastructure there, and to participate to conferences and talks. We want them to fully understand where they are and who the Sahrawis are.

There are 4 races: the classic marathon (tough, but finishable by any runner who has completed a normal marathon), the 21km, the 10km, and the 5km… We don’t want this to be an elite race; we want anyone to be able to participate. Including many of the local Sahrawi kids.

The marathon connects 3 of the 4 refugee camps, and the biggest part of it is in open desert. Organizing the race is difficult, compounded by the problems of arranging accommodation for the 300-400 participants, and of getting the people to the camps in the first place. In fact, the camps are 1 hour by road from the Algerian city of Tindouf, which foreigners can reach only by plane from Algiers. Furthermore, participants from certain countries need a special visa, which must be requested from the Algerian embassy through the Sahrawi delegate in that country.

The easiest way to get to the site is via the charter flight that Proyecto Sahara organizes from Madrid, but participants will still need assistance just to get to the camps, because it’s not an easy destination. Once competitors have arrived at the camps, we mostly just coordinate the work of the Sahrawi institutions. They provide most of the resources.

For those unfamiliar with the Western Sahara occupation, can you give a brief background to the issue?

I’ll try to put it simply, but on our website readers can find a lot more information. First of all, the race is not in Western Sahara itself, but in the Sahrawi refugee camps in Algeria, very close to the border. In 1975, Western Sahara was the last colony in Africa, inhabited by Sahrawis and occupied by the Spanish. When Spanish decolonization began, and Spain was about to give back the country to the Sahrawi, Morocco invaded from the north and Mauritania from the south, and the Sahrawi started to fight to free their country. 200,000 of them, mostly women and children, escaped through the desert and reached Algeria, creating refugee camps there that would be safe from bombing by the Moroccan forces.

The war continued until 1991, when the UN promise of a referendum to allow Sahrawis to choose self-determination or continue under Moroccan rule led to a truce. It has been 22 years now, and nothing has happened. The Sahrawis are still waiting for a solution after 37 years of life in the camps. There’s much more than this, of course, and I would invite anyone interested to read the documentation on our website.

How does the marathon tie in to the work of helping the Sahrawi cause?

Mostly by raising awareness and getting media attention, but also to show 300-400 people every year what it means to live in a refugee camp. The Sahrawi are waiting peacefully for their rights to be respected. There’s no war going on, no violent deaths. Very basic necessities are addressed — food is provided — so they are not starving. Despite this, the situation remains unacceptable, but — in the current world — it’s a situation that’s not considered interesting enough to be portrayed by mainstream media.

From some of the ESPN footage on your site, it looks like you’ve had corporate sponsors for the event. Was it hard to convince them to involve themselves in advocacy like this? 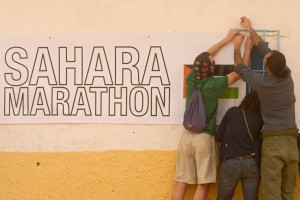 We don’t specifically search out sponsors for the event, though they are always welcome! For the races we accept donations in the form of material and sports gear for the young Sahrawis, and material needed to organize the race. We do also offer some visibility, but most of those who help do so because they think it’s a good way to give some support. The Sahara Marathon is run by volunteers and is a nonprofit event. All the costs are covered by the participants’ registration fee.

Where do the competitors come from?

Mostly Spain and Italy, then Europe more generally, and some from further afield. We normally have representatives from 20-30 different countries.

Newcomers to this issue who end up Googling Western Sahara, or who have seen documentaries about it, will come across many stories of landmines and the Polisario’s battles with the Moroccan government. Is the marathon safe to do?

Well, landmines left over from the war will be a huge issue for the Sahrawis the day they go back to their country — hopefully soon — but the refugee camps and the marathon are not in Western Sahara but in Algeria, where no landmines have been planted. And it’s the same regarding the conflict: The war stopped in 1991, and was never waged in Algeria, where the refugee camps are.

Unfortunately, another issue arose last year, when three NGO workers (an Italian and two Spaniards) were kidnapped from the camps by some men from Mali. Though this didn’t happen during the marathon, and the captives were freed in the end, the event changed things a lot, and is something we feel we need our participants to know about. Otherwise, though, the camps are one of the safest place in North Africa, visited by thousands of volunteers every year, and without a single other incident in 35 years.

If someone is interested in competing, how can they best get in touch to find out more?

They can go to the www.saharamarathon.org webpage, and check if there’s a contact in their country, or write to me at mdurli@saharawi.org.

Are there memories from previous marathons that stand out for you?

Every year is different, because every year is a brand-new challenge. In 2004 the marathon started with a clear blue sky, and after 30 minutes a huge sandstorm hit. Most of the participants managed to finish the race anyway — though with a visibility of only a few meters. Some people got lost but were found after a few hours — we were much more scared than they were. 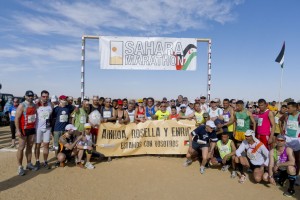 Then, a few years ago we had briefing and dinner by candlelight, because the power generator broke. It was quite romantic…

And every year, the day after the marathon, we organize the children’s race, when we give a t-shirt and a small toy to 1,000 kids who run a short race. Even with the help of the teachers of the schools to control them, it’s almost harder than to organize the adult marathon…but it’s awesome to see them so eager to run.

Finally, is there anything else you would like to tell those considering getting involved in the 2013 marathon, or supporting the cause of Sahrawi self-determination?

It’s not just a race, it’s a life experience. If you’re an experienced runner, the marathon is a very tough race in the desert. If you’re not, there are shorter races to suit everyone. And if you’re not a runner at all, you have the occasion to participate in a very interesting trip…and walk 5km in the desert.

If you’re interested in the Sahrawi cause, try to look for solidarity associations in your country — they can surely help you get more information or become directly involved in a project.

Tagged
Running Algeria
What did you think of this story?
Meh
Good
Awesome

Isabelle Eberhardt: The cross-dressing adventurer who decamped to the Algerian desert

The World’s Most Spectacular Roads

May 22, 2011 Kellen Eilerts
✖
travelstoke
Download the mobile app
stoked by