In part two of Jon Clarke’s ongoing quest for tube, the author goes to the town of Lobitos in Peru, where he has an unpleasant run-in with a local.

IN THE NEXT TEN HOURS, I’m going to suffer three setbacks to my attempt to surf my first tube. The last one will put me out of action for weeks. I guess sometimes things just aren’t meant to happen.

It’s my last opportunity for a while to get my first barrel. I’m exchanging coastal Peru for inland Brazil in a few days. A combination of favourable swell charts and stories of the incredible waves of Lobitos have brought me to this semi-deserted ex-petroleum town.

I pull my board out of its generously padded bag in Nacho’s surf hostel. The goons at El Dorado Bus Company have done a fine job: there’s a hole in the tail. Cracks run all the way to the leash plug. The bottom layer of the board separates when I press down on the top. This board is at the point of having its ass torn apart. Grinding my teeth, I ask Nacho if there’s a shaper in town.

There’s a whale’s skull in the front garden. Nacho wanders up to the side gate of the house and shouts over it. A half-naked guy wanders out of the gate, scratching himself.

“Darwin is lazy, so you’ll have to sit next to him and make sure he does the repair or you’ll be waiting for days,” Nacho explains as Darwin blinks at us both. Dutifully, I stick around to make polite but insistent chat as Nacho heads off down the track. Darwin saws the dead fibreglass off the tail and spreads a thick mixture over the exposed foam. “It will be dry in a couple of hours,” he tells me as hundreds of tiny, hungry midges orbit our heads. 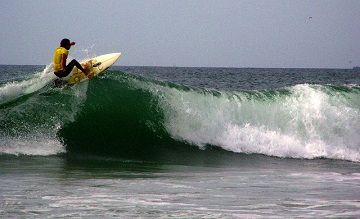 While I’m waiting, a surfer named Al from Manchester offers to show me the local grocery. We dash across the burning hot sand between tumbledown wooden houses. The shop is almost empty, filled mostly with tins. A selection of rotting produce sits under towels. “The fruit delivery arrives tomorrow,” the store owner explains. We settle for instant noodles, bread and a safe-looking pineapple.

On the dash back I feel a dull thump on the ball of my foot. I look down to see thick red liquid already spreading between my toes. A quick inspection confirms my suspicion: I’ve just torn a hole in my foot.

“Never, mind,” Al cheerfully offers, “We can glue it shut. I did exactly the same when I got hit in the head by my board last week.” He dips his head, parting his hair to display a purple scar. Back at Nachos, I dribble antiseptic over the thick flap of skin, poking grains of sand out of the inside of my foot. Al pushes the flap shut and squeezes a generous dollop of glue around the ragged edges. I’m fixed.

I cautiously walk down the steps from the hills surrounding Lobitos’ famous wave. There are already ten people in the water, all paddling steadily to keep on the point where six-foot waves are peeling down into the bay. Each wave has two or three surfers paddling onto it, shouting at each other and dropping in. 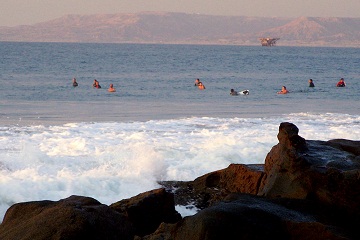 I wade through the rumbling leftovers of the waves. Peruvian families splash around in the shallows twenty feet away from the spot where Al got the gash in his head. It’s a pretty easy paddle out, and I’m soon at the takeoff.

The atmosphere in the water is intense, and the quality of surfing is high. Surfers paddle further inside in a game of chicken to make steep drops onto waves and get priority. People drop in on their waves anyway. Everyone is out to get their own, and screw the rest. Thirty minutes in, I manage to get a small wave that someone doesn’t shout me off or steal. The numbers in the water have doubled, with more people steadily arriving in the line-up.

Thirty minutes is all I get. As I’m paddling up to the takeoff I hear I some angry chat behind me. Next thing, there’s a tug on my leash. I sit up on my board and turn around as a thick-set Peruvian paddles up to me and gets in my face.

“Va p’alla.” Get out of here. I stare at him blankly, confused. “Va p’alla,” he repeats, pushing me and pointing back towards the shore. “Que he hecho?” I reply: What have I done? In reply, he slips off the back of his board, and with the force of its buoyancy assisted by a shove, slams the sharp point of the nose into my ribcage. I’m totally caught off guard, and off balance. I flail around and by the time I’m back up straight again, he’s back on his board, staring at me. 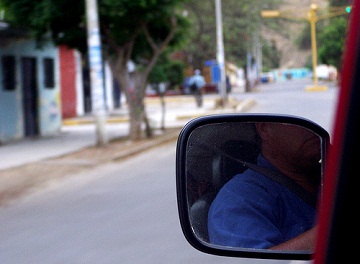 I’m not a fighter, and floating on a board surrounded by twenty Peruvians seems like a bad place to start; I turn back to the beach and start paddling. Perhaps one of the nearby waves. They aren’t the grinding barrels of Lobitos, but at least I’ll be surfing without any trouble.

That’s when I stretch ahead for a paddling stroke and feel a pop in my side, accompanied by a stab of pain. I know straight away – this is the end of my surf trip. The rest of the day is going to be land-locked, watching other people tuck into tubes until I get the bus back home.

As I’m dragging myself out of the water I paddle past a wide-eyed foreign kid, too young for a shaving razor. “What the hell was his problem?” I explode, wanting to express the injustice of it all to someone. “I’ve never surfed anywhere like this,” he replies in a quavering Irish accent.

I shake my head and continue limping towards the shore with a spreading dull ache in my side, leaving him absorbed in his own private terror of a day at Lobitos.

Read part one of Jon Clarke’s quest for tube.