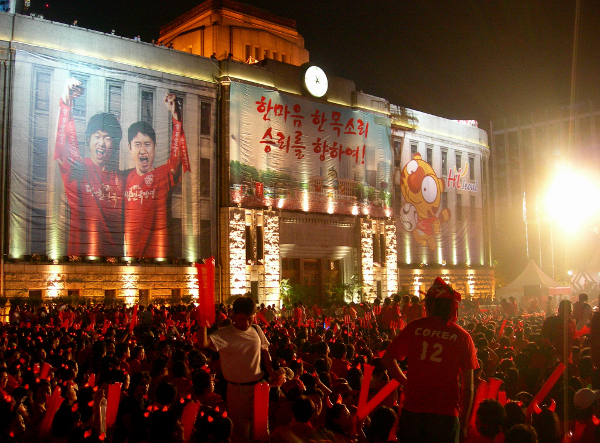 The Red Devils will be playing at least three games in South Africa, and the country is taking to the streets, bars, and restaurants to watch. Rob McGovern suggests the following places for a uniquely Korean World Cup experience.

Baseball stadiums, football stadiums, and any large open areas, especially ones that usually hold performances. will likely host outdoor screenings of games. These places will be the most densely packed with supporters, and as Korea doesn’t put too many restrictions on public alcohol consumption, flowing with soju and Hite, Korea’s most popular beer. 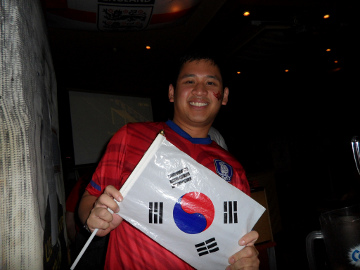 The best way to find out where the games will be screened outdoors near you is to call your local tourist office by dialing your area code followed by 1330.

Both expat and normal Korean bars all over the country will be installing large screen TVs and even projectors to attract World Cup patronage. Due to the time difference between Korea and South Africa, some games will kick off at 3:30 am Korean time, so Korean bars will likely only stay open late for games involving Korea.

Expat bars are a good choice for their traditional late hours. With England, the USA, Australia, South Africa, and New Zealand at the tournament, expat bars may also offer the best value for money, as good cheer and beer will be flowing in until at least the end of the group stage. 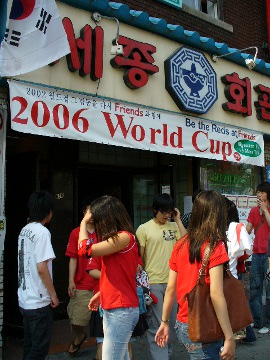 Korean meat houses, or gogi jip, are no-frills places, full of simple tables with grills and fridges full of beer, and are particularly popular on weekends. They’ll be crammed full of inebriated, middle-aged Korean men eating foods like sliced belly pork, pig neck meat, boned and unboned chicken feet, pig cheek, grilled intestines, and a Korean favourite, galbi, while watching whichever game is on. Every city, town, village, and hamlet has some incarnation of a gogi jip.

If you want to forgo the food, then the ka maek, literally beer stores, are the places to go. As humble as the gogi jip, these places also do exactly what they promise. Refrigerators full of beer and soju line the walls and that is about it. Their small kitchens usually offer snacks of dried white fish, dried and roasted squid, or egg rolls to give the heavy drinking patrons something to nibble on while chatting loudly or, for the next four weeks, shouting at the TV.

Jjimjilbangs are essentially saunas, and usually stay open all night. Unlike Western saunas, jjimjilbangs are very cheap places to spend a day, a night, or both. You can eat, drink, have a massage or get scrubbed down by a man (or a woman) with a rough cloth. Jjimjilbangs are also evidence of how much Koreans love TV: they’re packed with plasma screens.

In the segregated areas you can, after scrubbing yourself down, relax in pools of varying water temperatures while watching TV, sit naked with a lot of naked Korean men, in the changing room, if that’s your thing, while watching the TV, watch in one of the communal areas, or sometimes, as is the case is in my local jjimjilbang, on a big screen in a reasonably-priced restaurant.

Where would you watch the World Cup in South Korea?