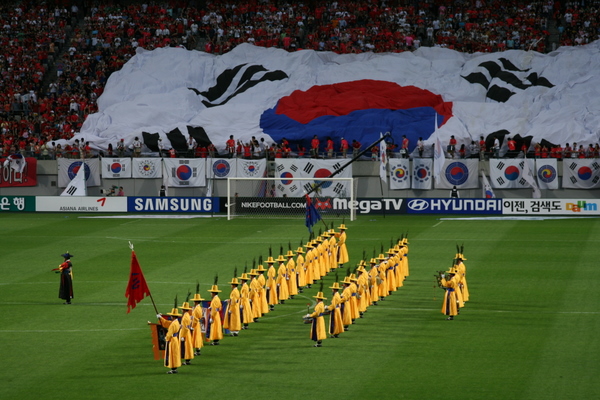 2010 will be the first time that North and South Korea compete in the same World Cup. Matador Sports’ Lindi Horton breaks down what to expect from a potential Korea-Korea match-up.

Even soccer isn’t immune to the tension between South and North Korea. In 2008, North Korea forfeited their home field advantage after refusing to fly South Korea’s flag or play their national anthem at a qualifying match in Pyongyang, leading FIFA to move the match to Shanghai.

After a 1-0 loss to South Korea in April 2009, North Korea coach Kim Jong Hun went even further, accusing the opposing team of poisoning North Korea’s players. With both teams qualified for South Africa, their next game could be at the World Cup

With seven consecutive World Cup qualifications and two Asian Cup championships, South Korea is the better-placed team in the Korean clash. Still, the South Korean team has only won a single game out of their past four with North Korea: the other three matches ended in draws.

The team is currently coached by Huh Jung-Moo, a former player credited with ending Korea Republic’s long absence from the World Cup in 1986. In his strategy for the tournament, Huh has looked beyond North Korea, emphasizing conditioning to make South Korea competitive against stronger European teams.

Key players for South Korea include captain and Manchester United midfielder Park Ji-Sung, who was a member of the country’s 4th-place team 2002 World Cup team. 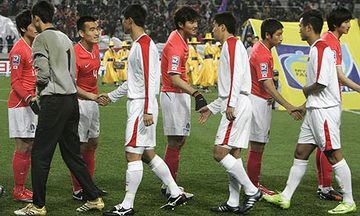 North Korea is better known for their women’s soccer teams than for their men’s squad. Only three of the team’s players, Kim Yong Min, Ri Chang Ha and Yong Kwang Min, are signed with foreign clubs. The country’s last appearance at the World Cup was in 1966.

North Korea has a history of getting into trouble with FIFA. At a 2005 qualifying match against Iran in Pyongyang, fans began to throw stones, bottles, and chairs onto the field after the referee refused to award North Korea a penalty kick following a controversial play. Riot police were called in after fans blocked the Iranian team from leaving the stadium.

As a result, North Korea forfeited it’s home field advantage for their qualifying match against Japan, which FIFA relocated to an empty stadium in Bangkok.

Even at 750-1 odds to win in 2010, the North Korean coach Kim Jong-Hun told Korea News Daily that Korea DPR “will prove that we are not going to the World Cup just to make up the numbers. We are confident about competing against the best teams.”

The team plans to play the ultra-defensive 5-4-1 formation in South Africa.

While Korea Republic players generally reside in South Korea, North Korean players’ loyalties can get a bit more complicated, with most players living in either South Korea or China. In a recent interview with Reuters, Japanese-born player An Yong-hak said that he considers himself to be Choseon rather than North Korean.

I’ll represent North Korea at the World Cup …but I feel I’m also at home here in the South,” he said.

Check out our World Cup profiles of South Africa and the United States.