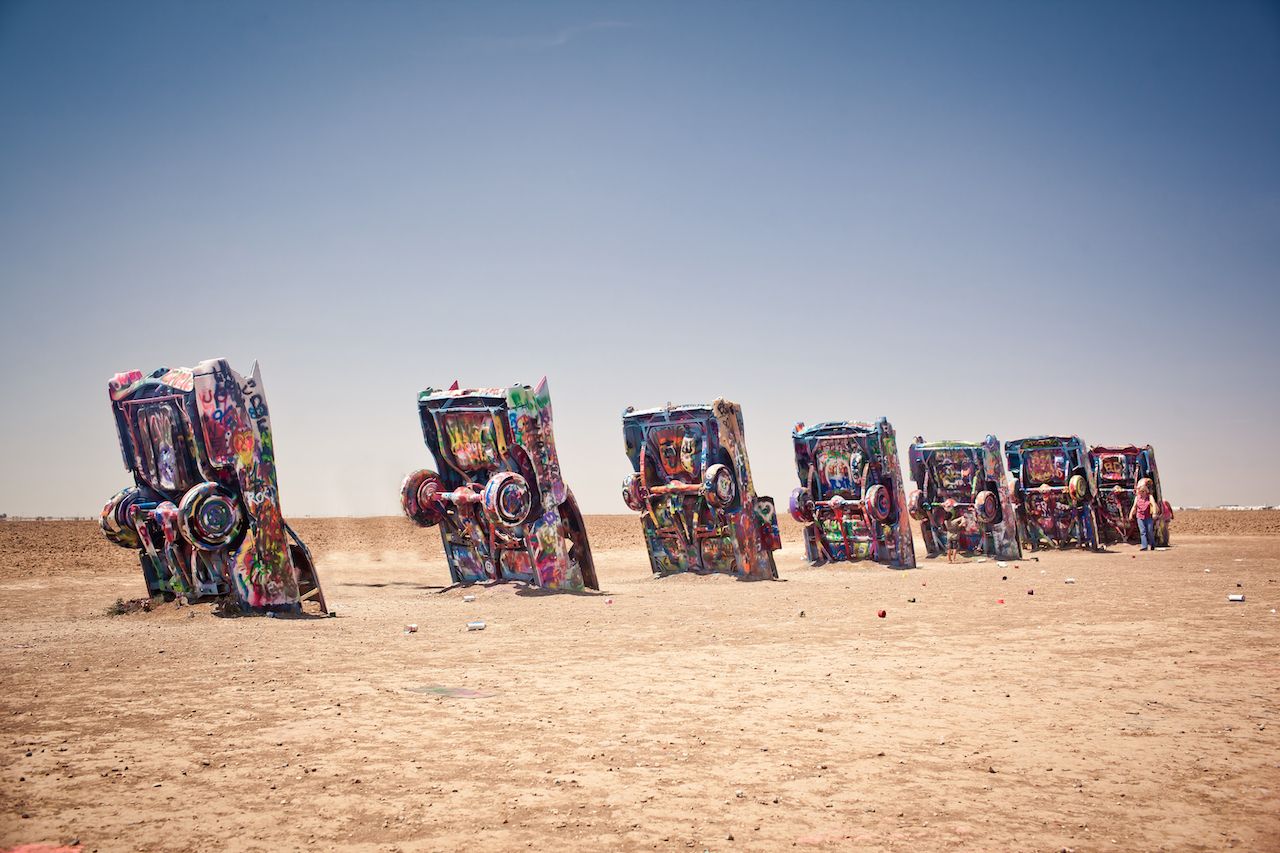 A public art installation by members of the Ant Farm, Cadillac Ranch is a row of Cadillacs buried nose-first into the ground. The angle at which they jut out of the earth corresponds to the Great Pyramid of Giza.

The treehouse, built by Minister Horace Burgess, contains 80 rooms, including a church and a bell tower. Minister’s Treehouse was closed by the state fire marshal in 2012. 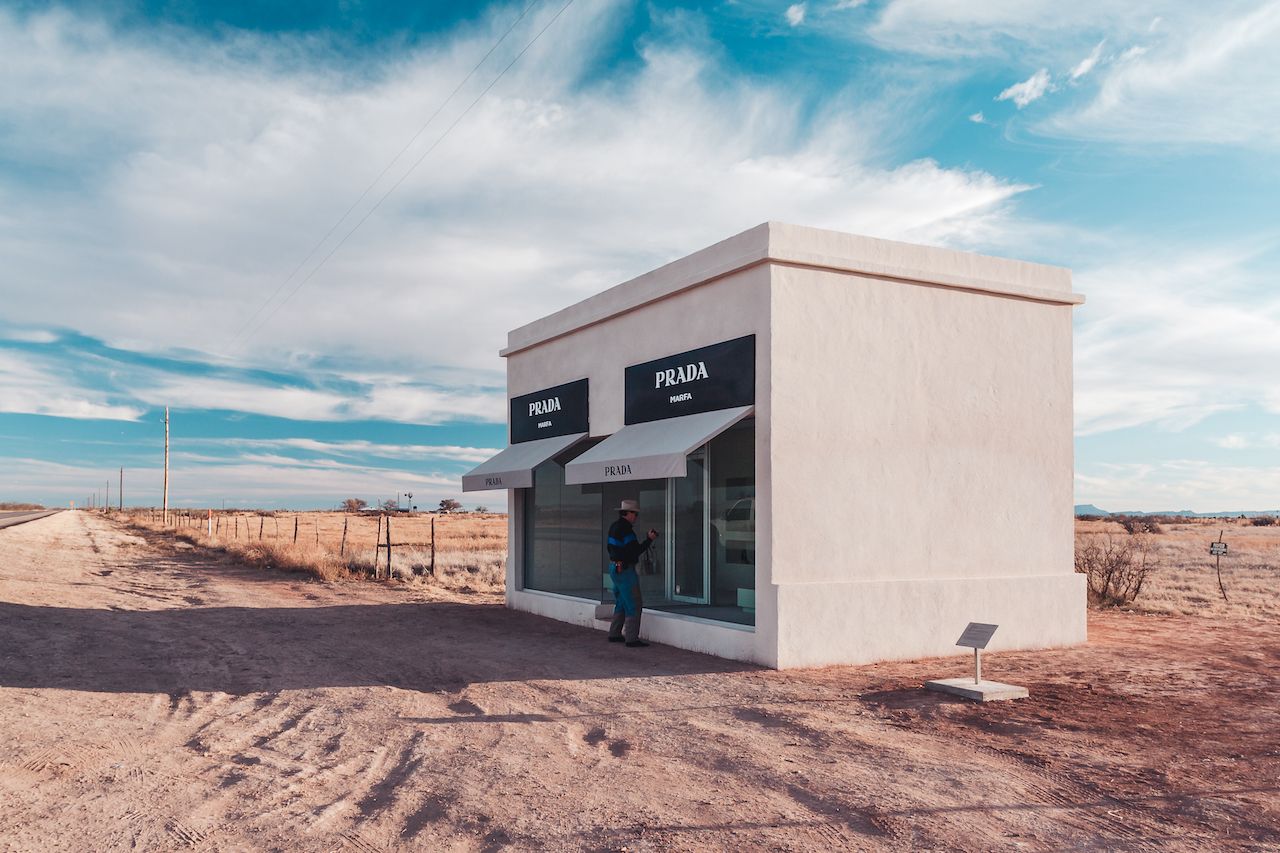 An art installation by Elmgreen and Dragset, Prada Marfa is a building (miles from the nearest town) resembling a Prada store. The store is never open, and the door is nonfunctional.

Harvey is a 23-foot-tall rabbit (with a human body). The fiberglass statue used to have a service station man’s head before he gained his new ears. 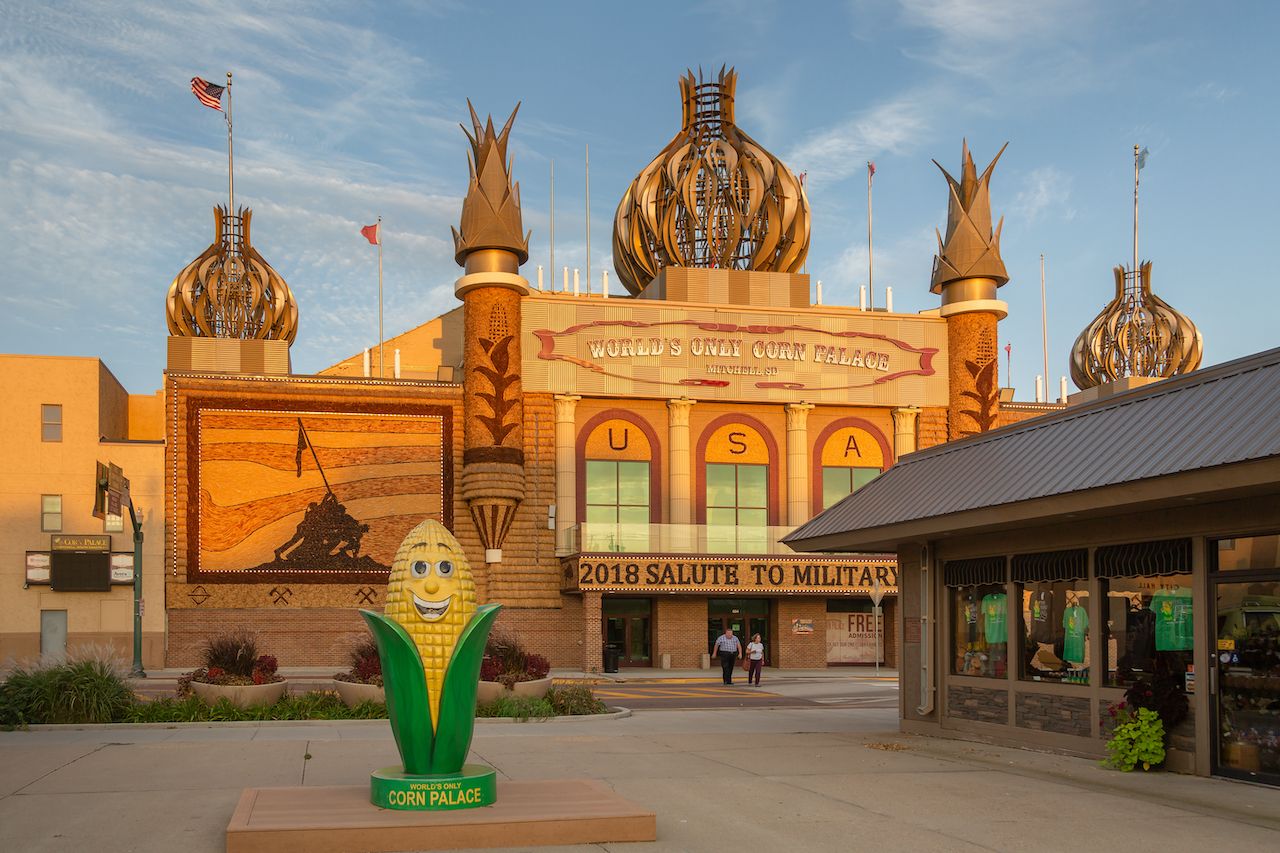 The Corn Palace is a building built in the Moorish Revival architectural style. The murals covering the building are made of corn and other grains. The site is visited by over 500,000 people annually.

While appearing to be a giant peach upon first sight, the Peachoid is actually a 135ft-tall water tower. (What a surprise. I know.) 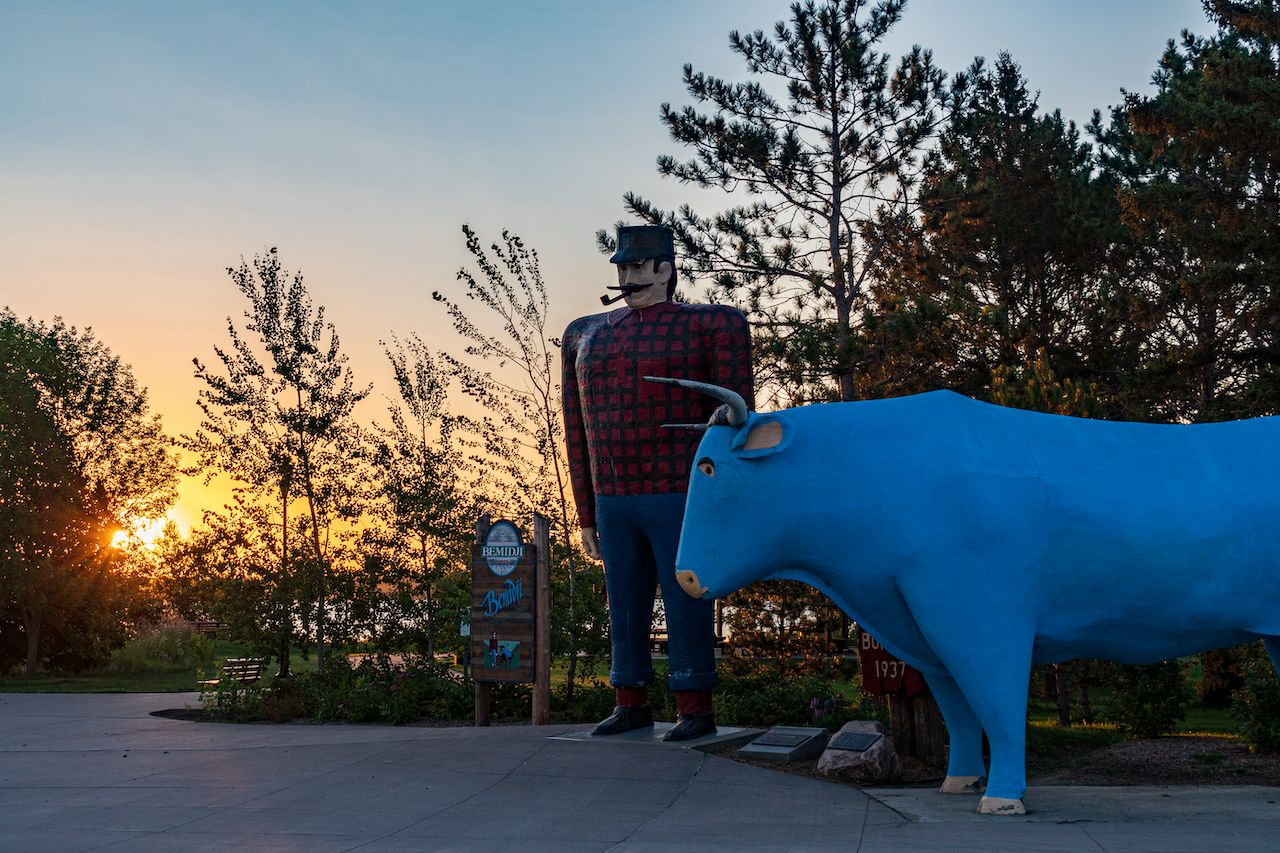 The statue of Paul Bunyan is 18 feet tall — Babe is 10. Like so many entries on this list, these statues attracted a lot of the earliest road trippers in the 20th century.

The World’s Largest Six Pack was originally built in 1969. These tanks, which have since been painted over in a different style, contain 22,220 barrels of beer. 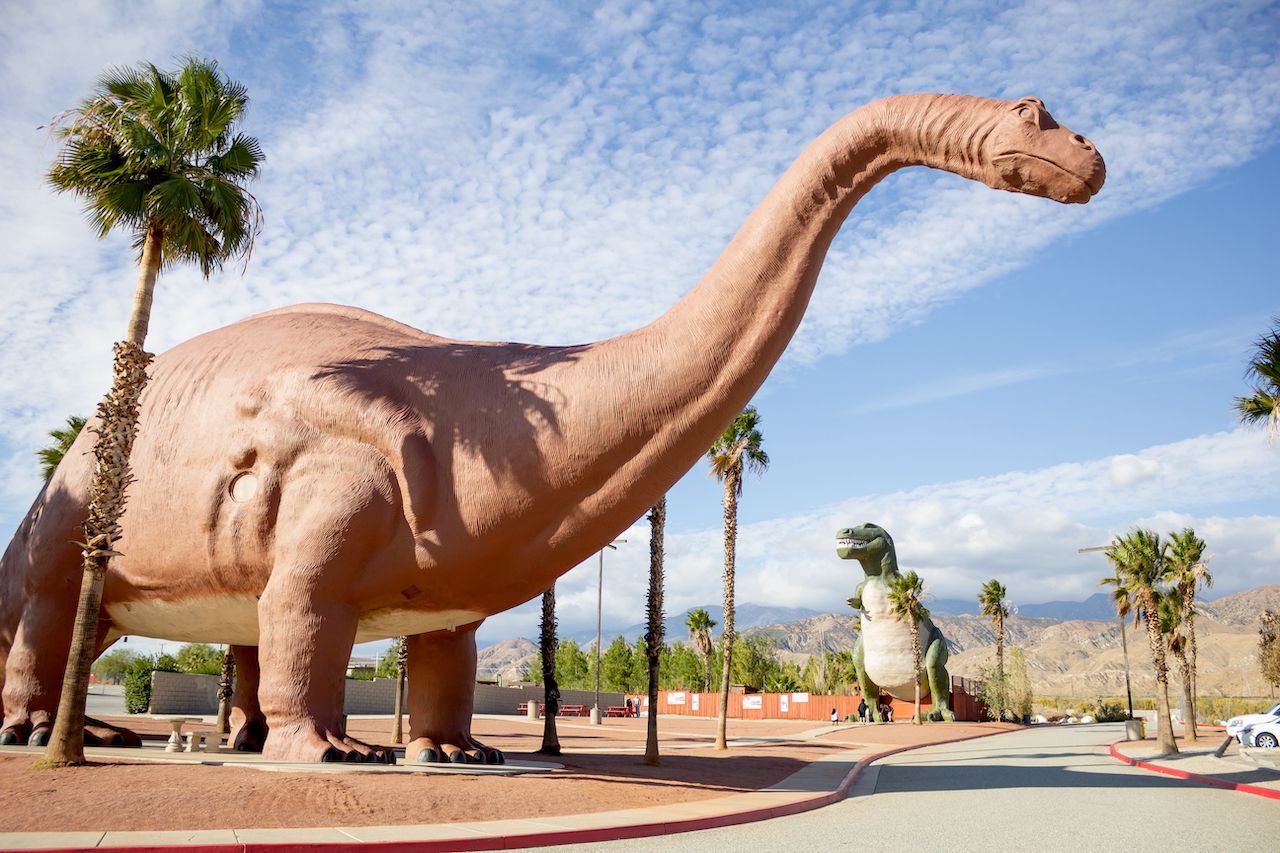 Located in Cabazon, California, Claude Bell’s Dinosaurs (also known as the Cabazon Dinosaurs) include a 150-ton Apatosaurus-shaped building, as well as a 100-ton Tyrannosaurus Rex sculpture.

A water tower designed in the shape of a ketchup bottle, the World’s Largest Catsup Bottle made its way onto the National Register of Historic Places. 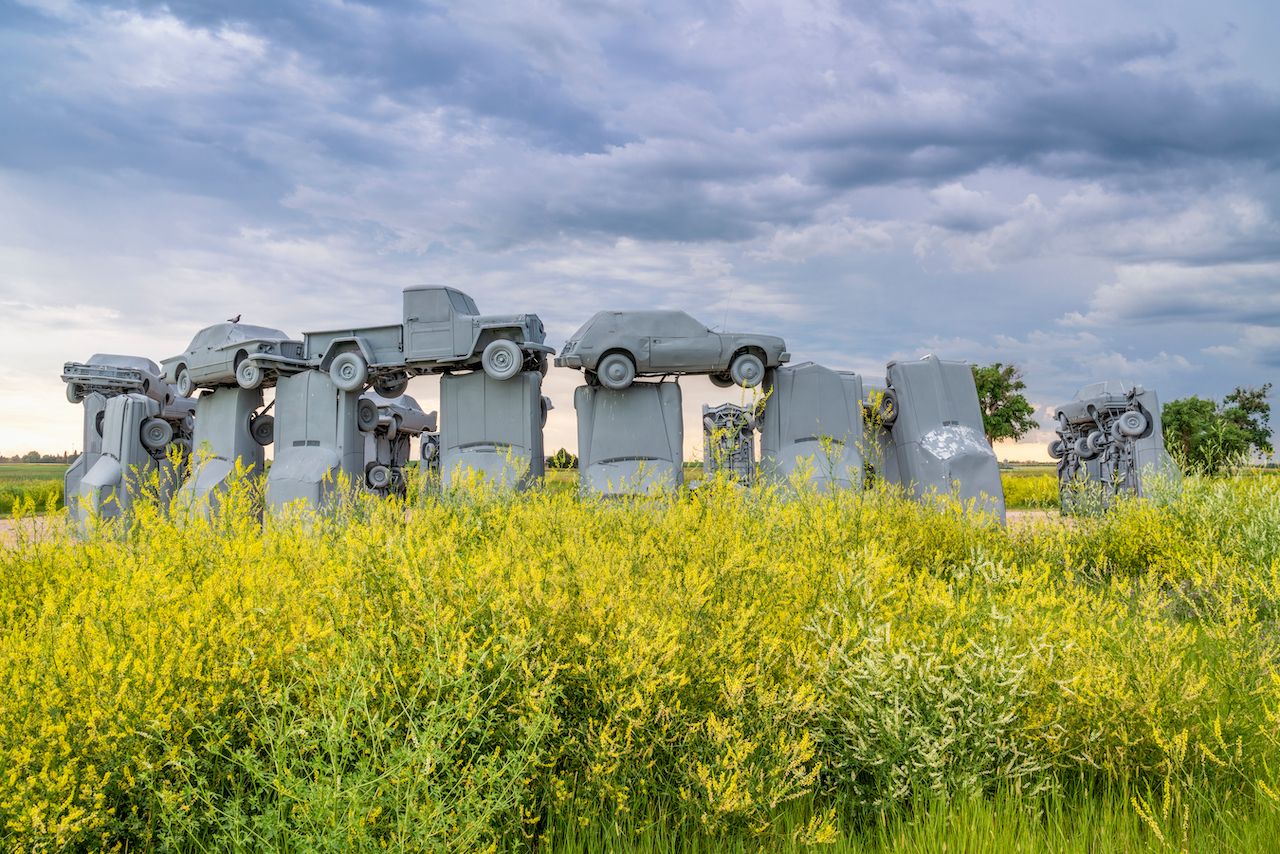 A replica of Stonehenge, Carhenge features 38 automobiles spray-painted gray. Jim Reinders built the site in 1987 as a memorial to his father.

The Flintstones Bedrock City is a small theme park and camping resort in South Dakota. Entering the theme park costs $10, while a season pass runs $15. Take that, Disney. 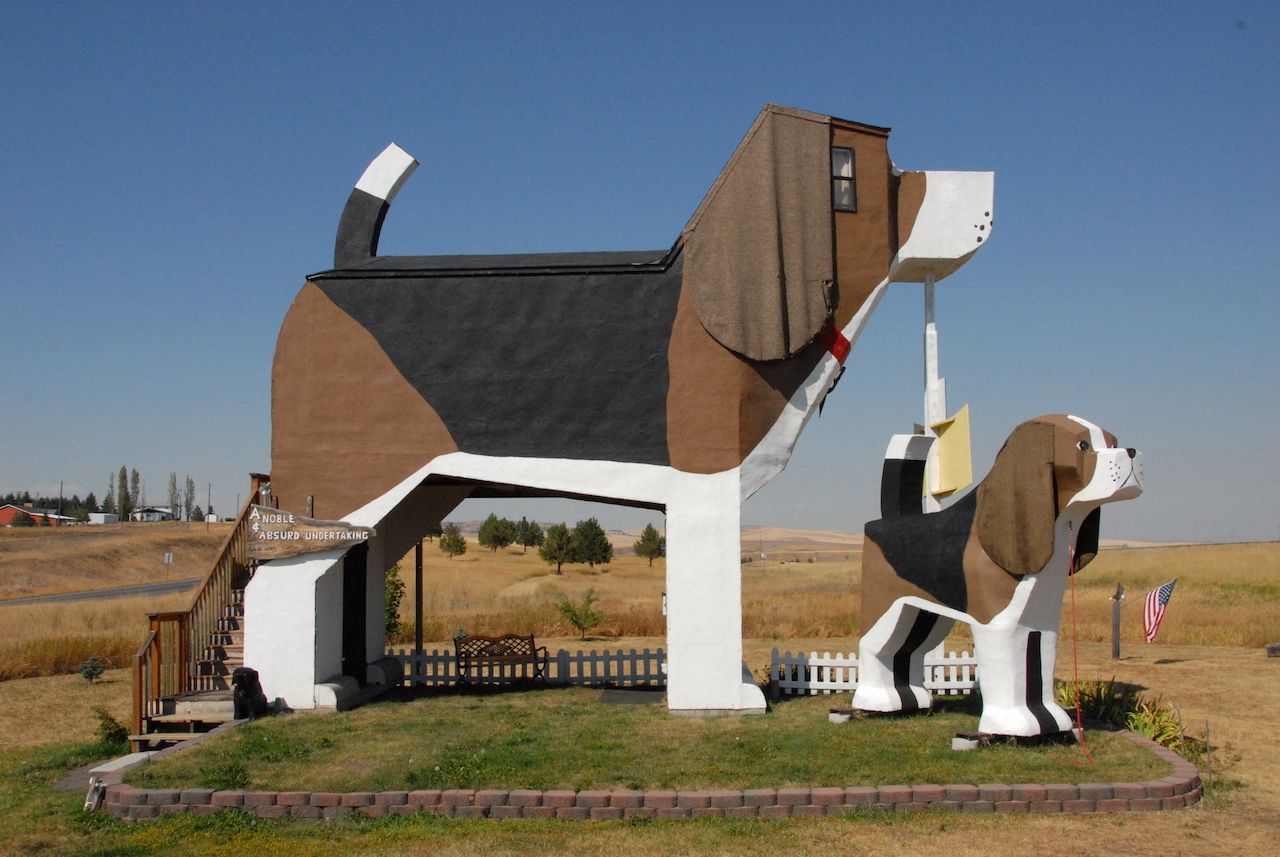 The World’s Biggest Beagle is actually a bed and breakfast. Locals refer to the 30ft-tall two-story building-dog hybrid as Sweet Willy.

Difficult to find, the abandoned large loaf of bread in Urbana still attracts tourists. It sits behind an old factory on private property. 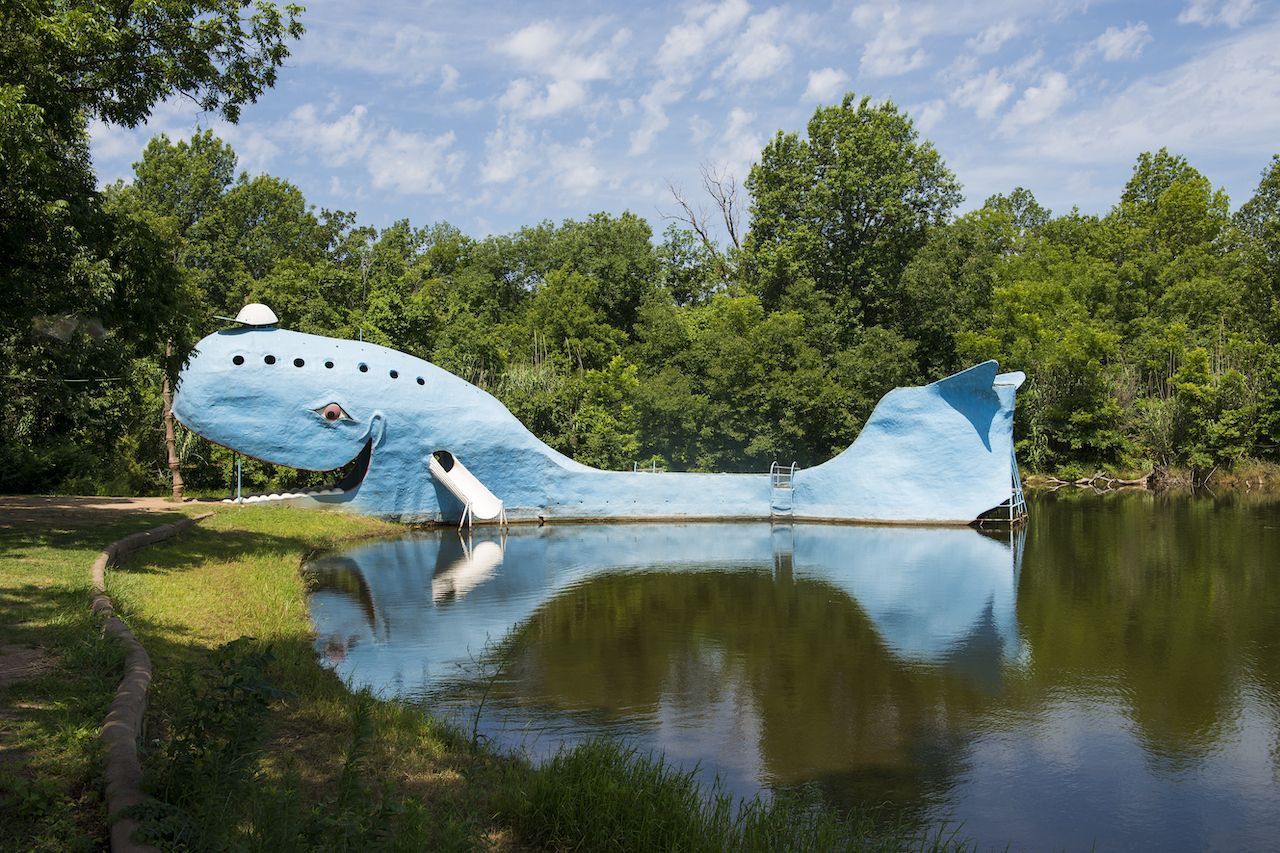 Found off of old Route 66, the Blue Whale of Catoosa sits in a pond were locals and visitors used to be able to swim — notice the slide coming out of the whale.

Found in North Dakota, the Wee’l Turtle is an 18ft-tall structure made of 2,000 wheel rims, built in 1982 by George Gottbreht. 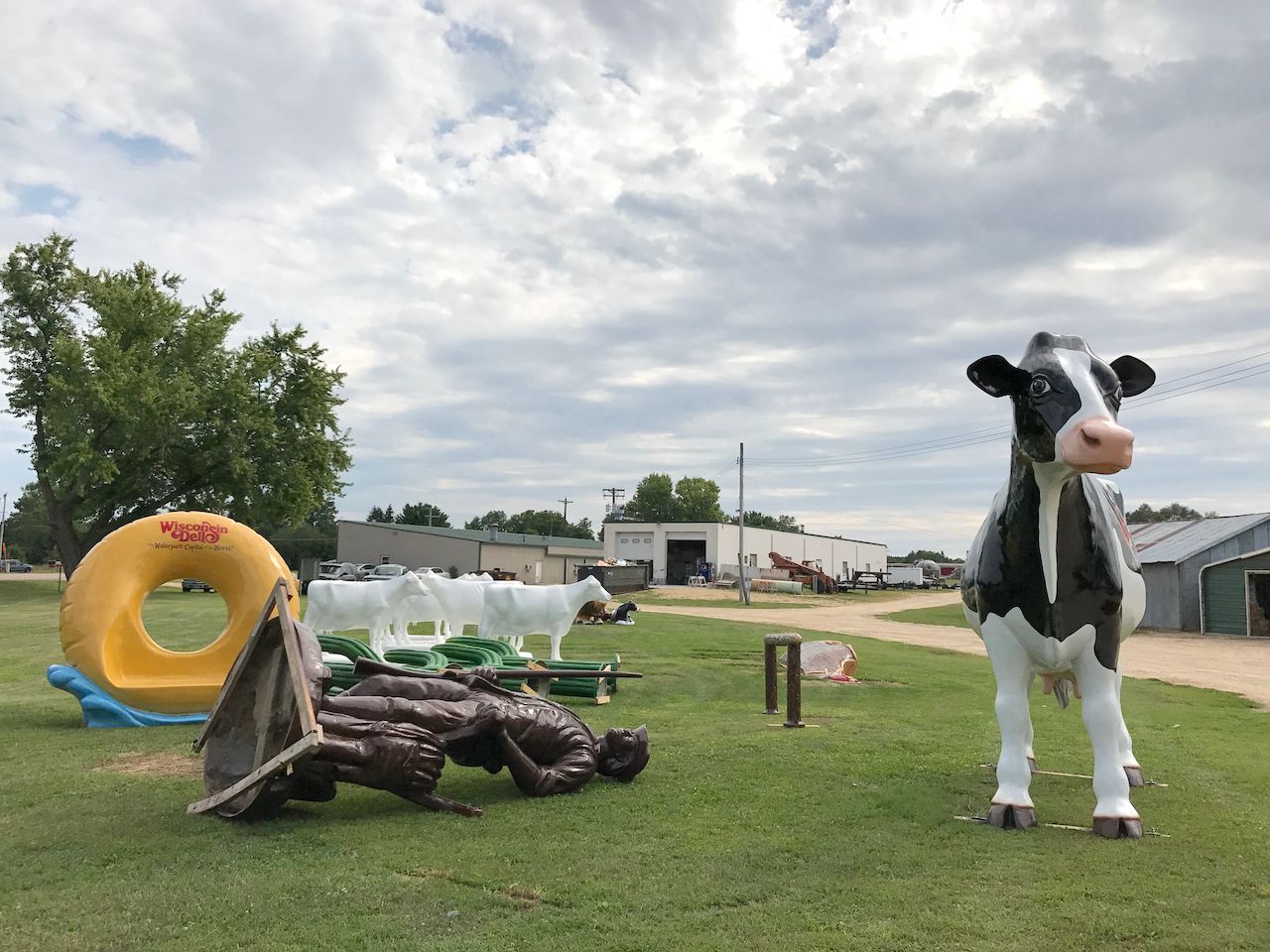 Fiberglass, Animals, Shapes, and Trademarks Corp. can be found in Sparta. You’ll also find dozens of the fiberglass molds they make right in their backyard.

The Devil’s Rope Museum is dedicated in its entirey to barbed wire. The building in which the museum sits is a converted brassiere factory. 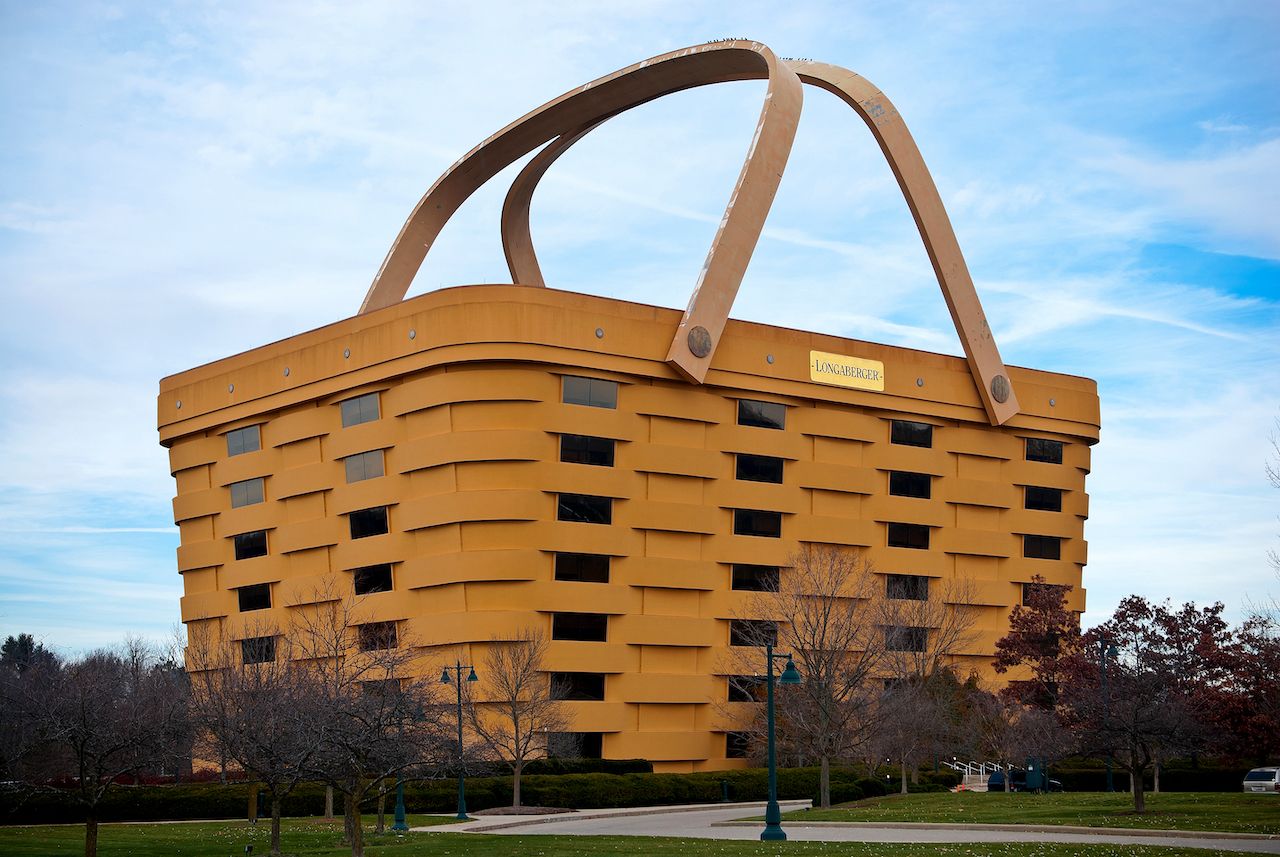 Upon first sight, the structure may appear to be a sculpture, but it’s actually an office building for the Longaberger Basket Company (which, unsurprisingly, manufactures wooden baskets).

The Skunk Ape (also known as the Florida Bigfoot) is a hominid cryptid which supposedly lives in Florida. Despite its remaining undiscovered by the scientific community, there’s research to be done! 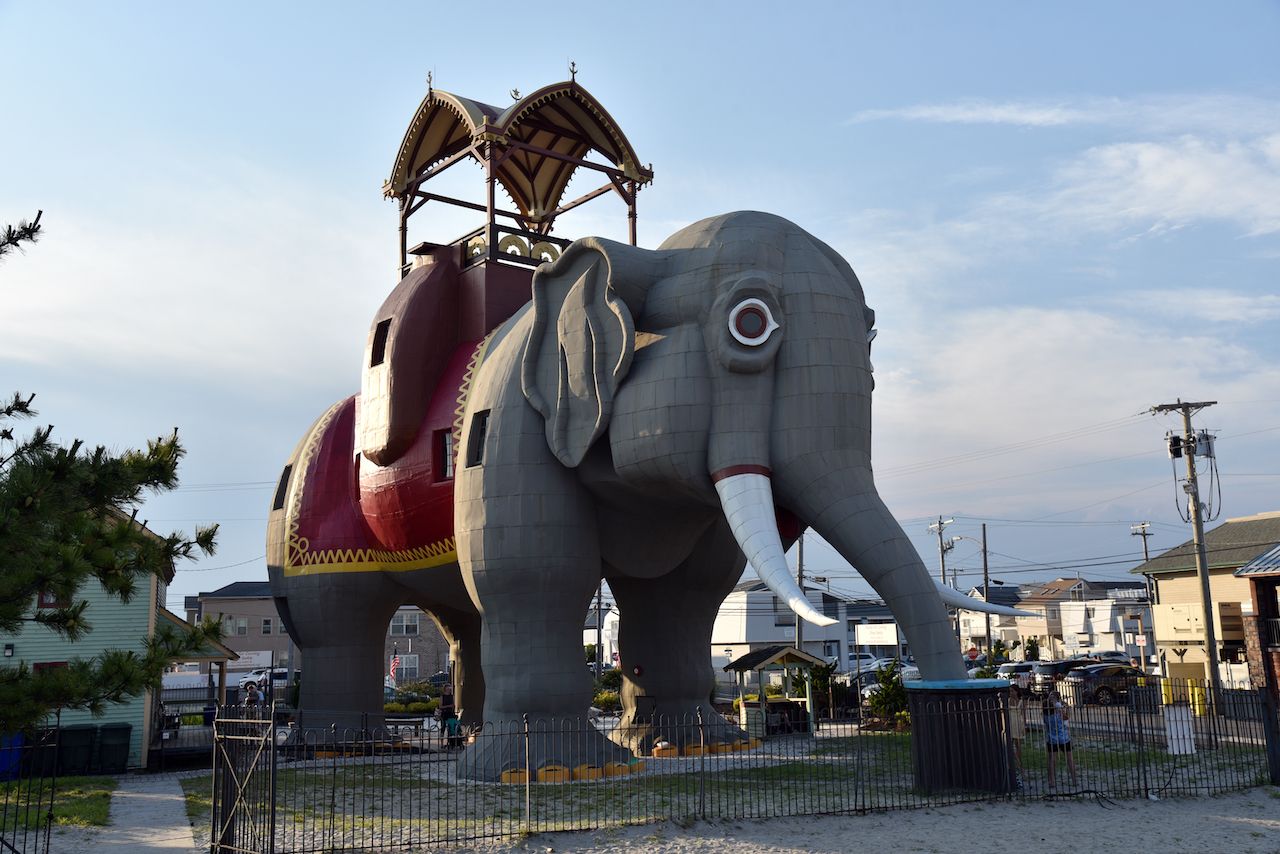 A great example of novelty architecture, Lucy the Elephant is a six-story building. The structure was built with hopes of increased real-estate sales and tourism. 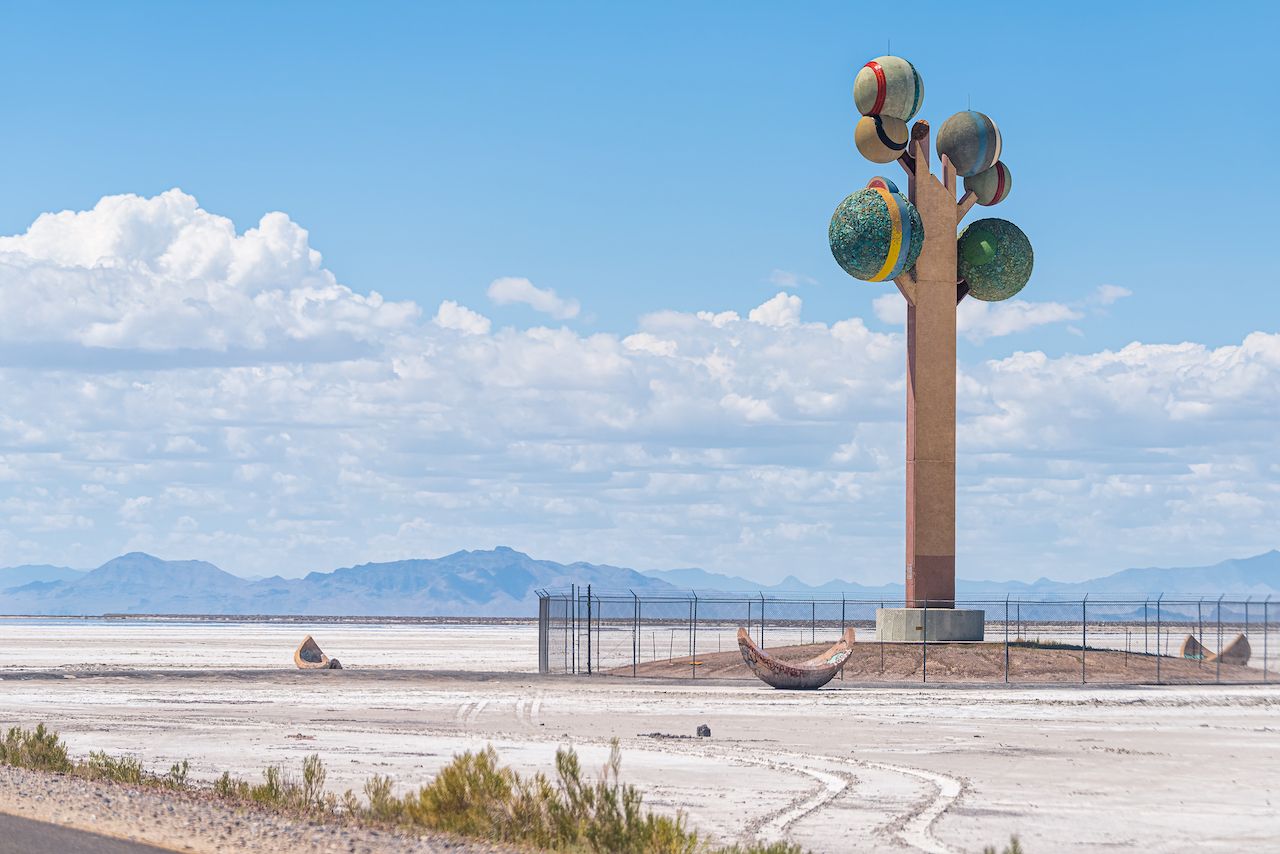 Also known as The Tree of Life, Metaphor: The Tree of Utah is an art sculpture created in the 1980s by Karl Momen. The statue is made of concrete and natural minerals native to Utah.

A replica of England’s Stonehenge, Stonehenge II can be found in the Texas Hill Country. Additionally, two Moai (the famous heads of Easter Island) have also been erected on the site. 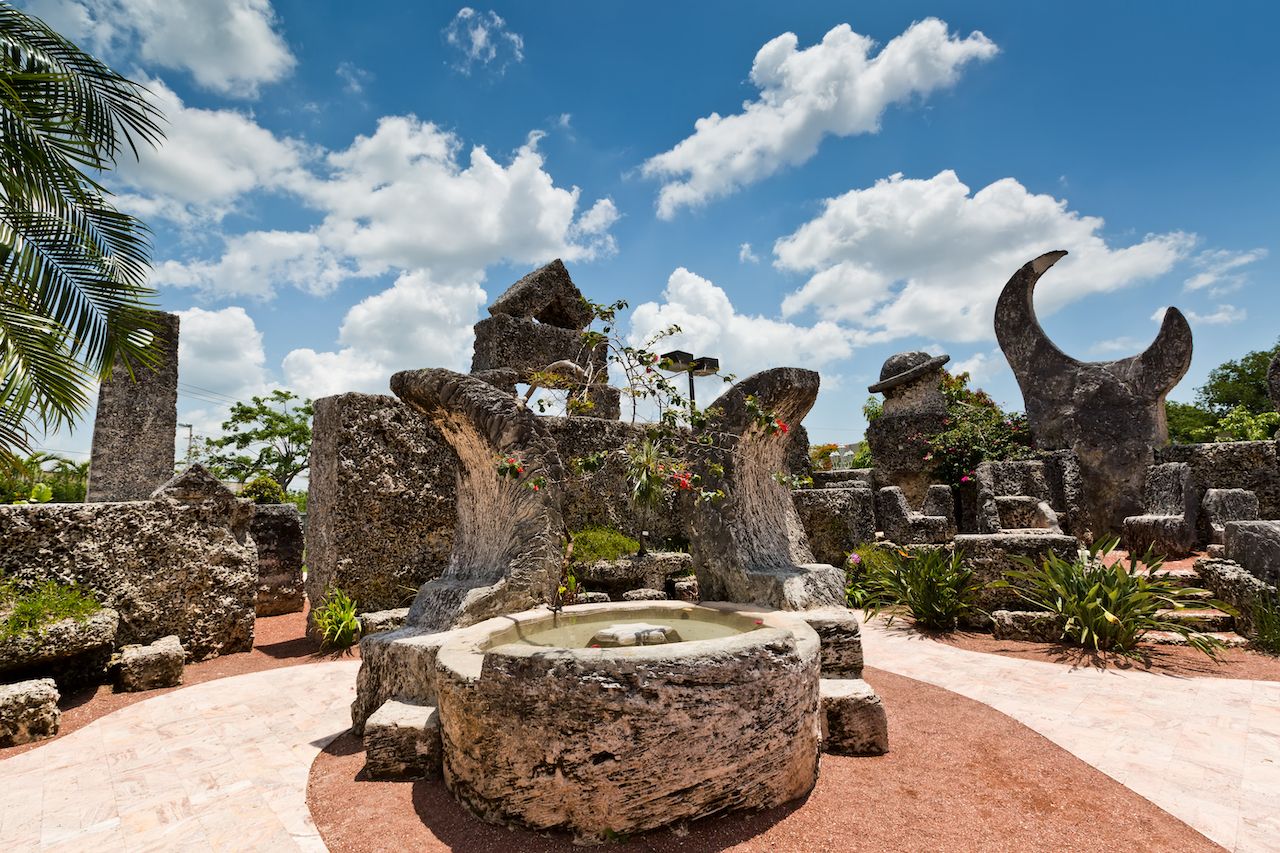 The Coral Castle is a stone (and coral, obviously) structure built by Edward Leedskalnin. It took Leedskalnin 28 years to build.

Vent Haven claims to be the only museum devoted to ventriloquism, with a collection of over 700 ventriloquism-related items and dolls. 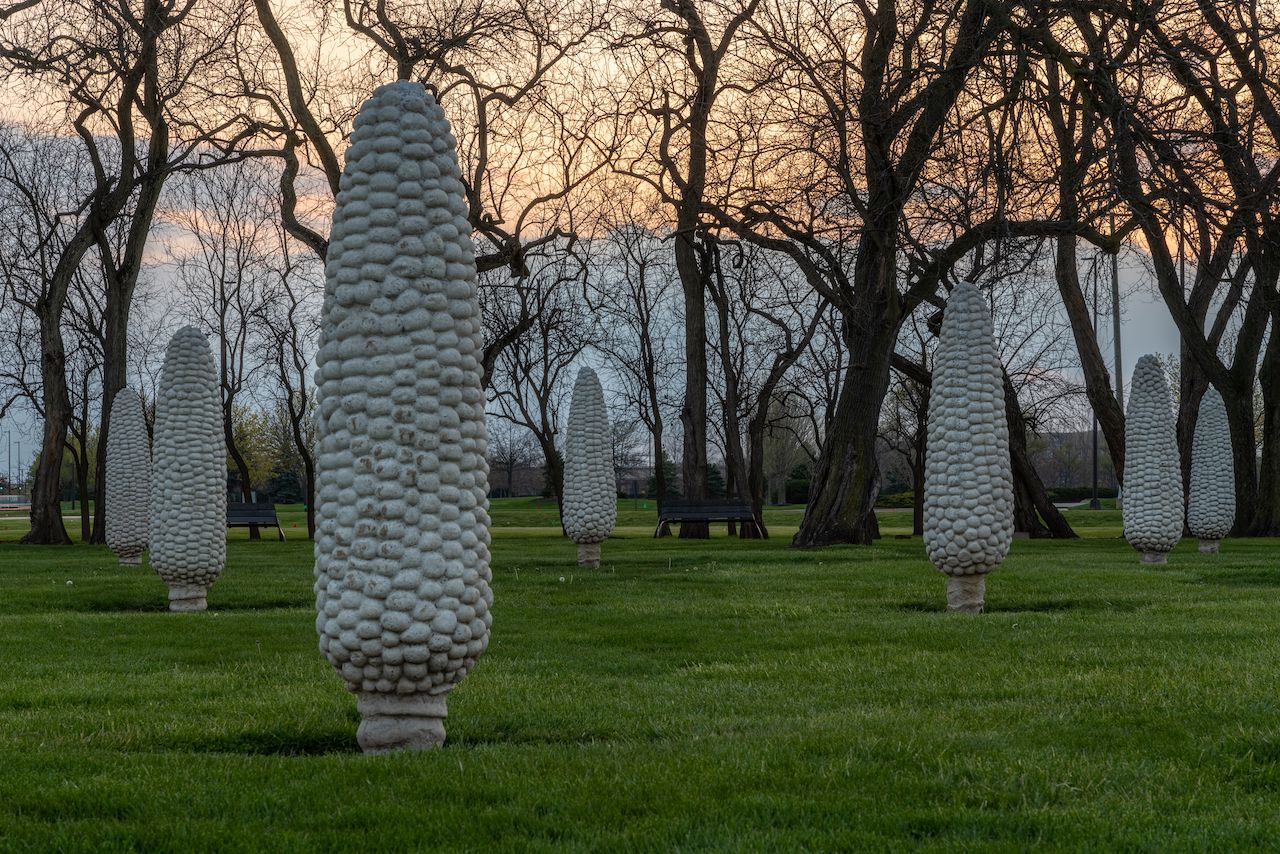 Also known as Cornhenge, the art installation Field of Corn (with Osage Orange Trees) was publicly funded and consists of concrete ears of corn placed in rows. 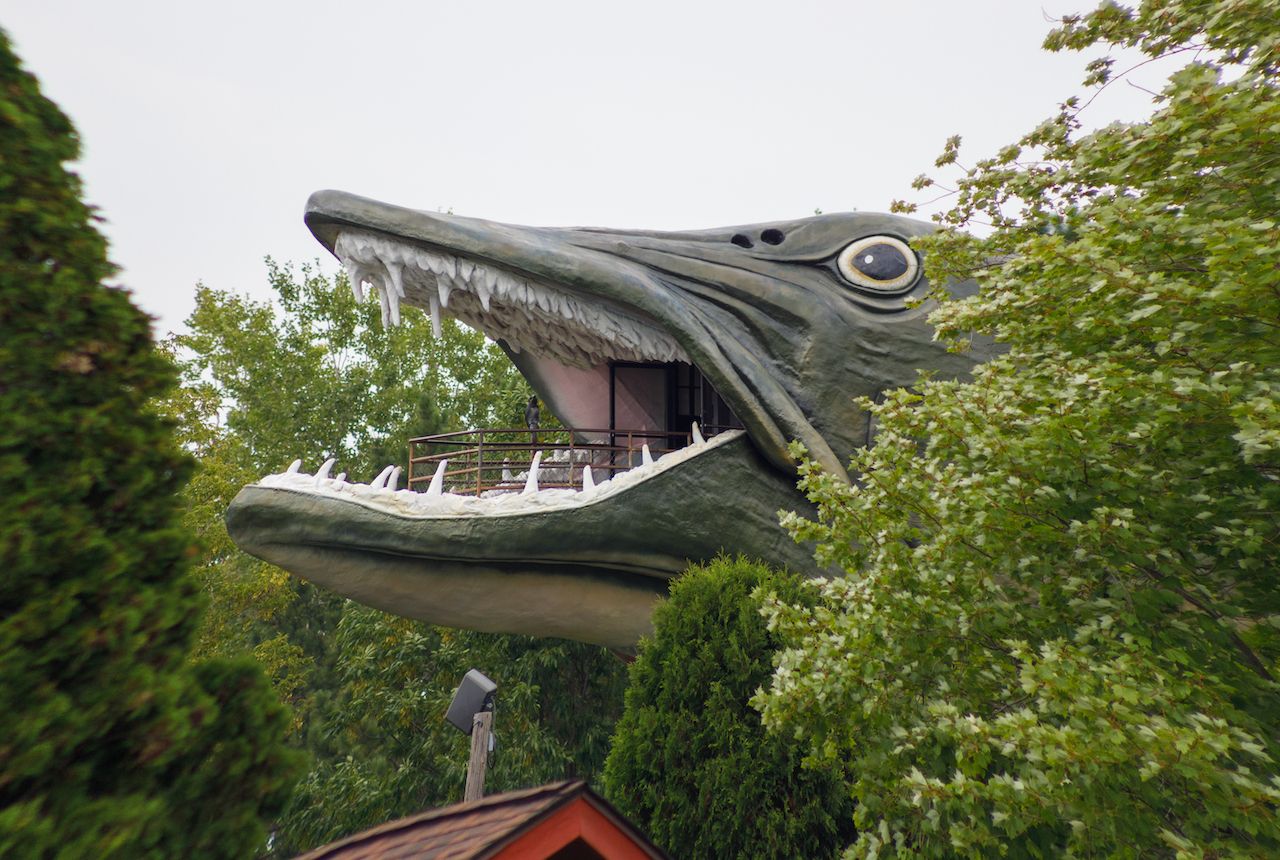 The National Freshwater Fishing Hall of Fame and Museum is just that, a museum. The notable part? One of its buildings is a 143ft-long fiberglass sculpture of a fish (actually made by F.A.S.T. Corp).

Mammy’s Cupboard, a restaurant on US Route 61, is built in the shape of a skirt with a woman adorning the top. Her earrings are made of horseshoes. 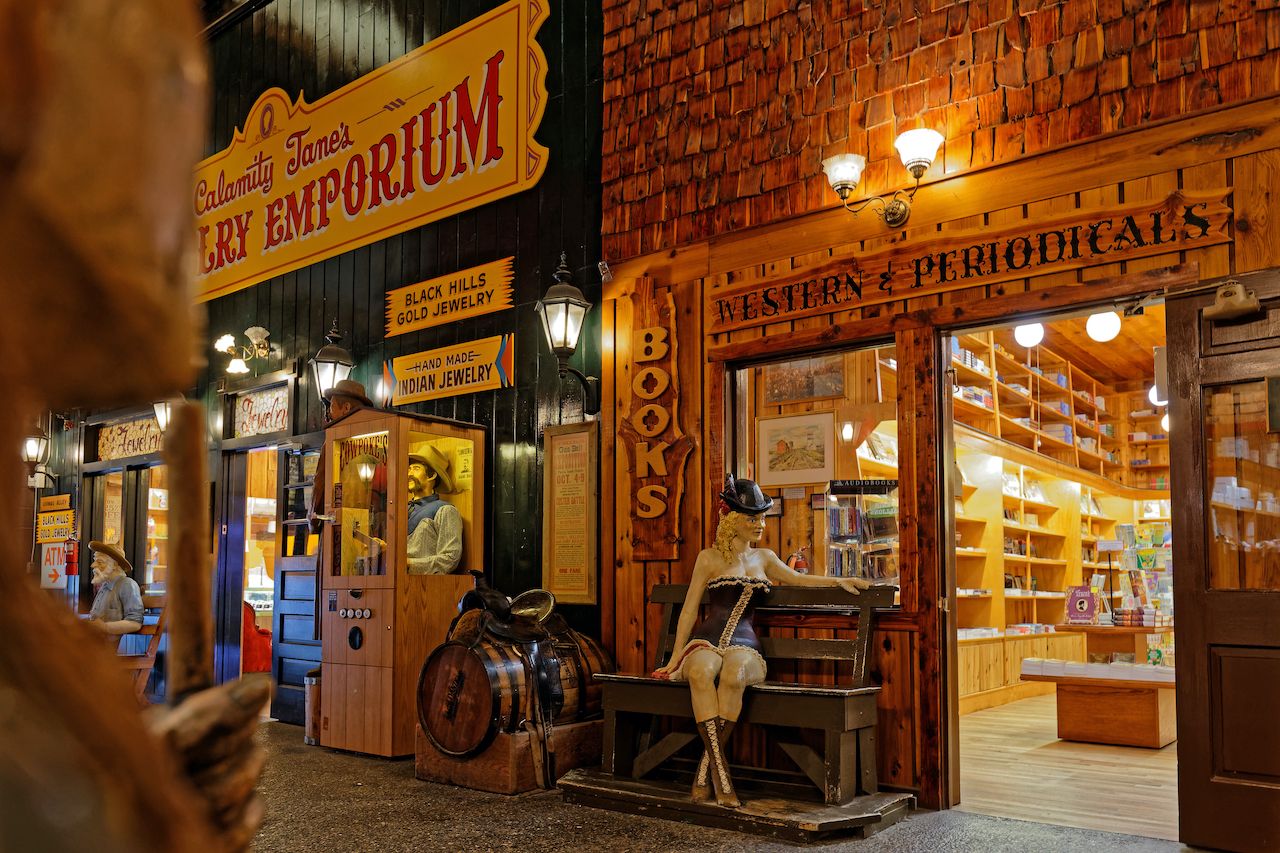 Wall Drug Store is a shopping mall and large tourist attraction in the city of Wall, which had a population of 766 as of 2010.

A sculpture garden off South Dakota’s Interstate 90, Porter Sculpture Park is home to many sculptures made of salvaged materials. The largest is a 60-foot-tall bull head. 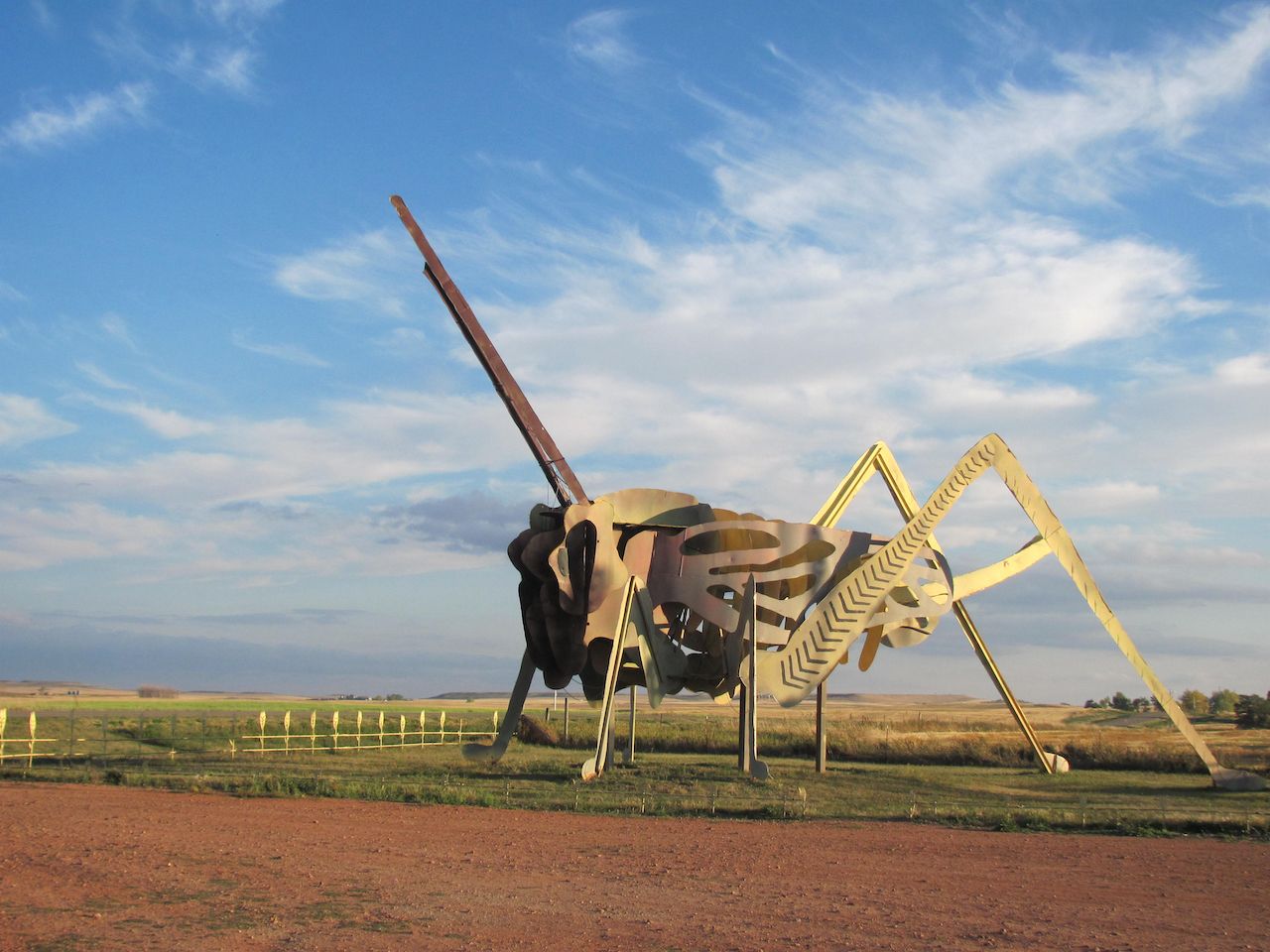 The Enchanted Highway is said to be the world’s largest scrap-metal collection. The sculptures are found intermittently alongside a highway (which has no highway number) in North Dakota.

The statue of Albert the Bull was built, mostly of concrete, in 1964. It measures 33 feet tall and 30 feet long and weighs a monumental 45 tons. 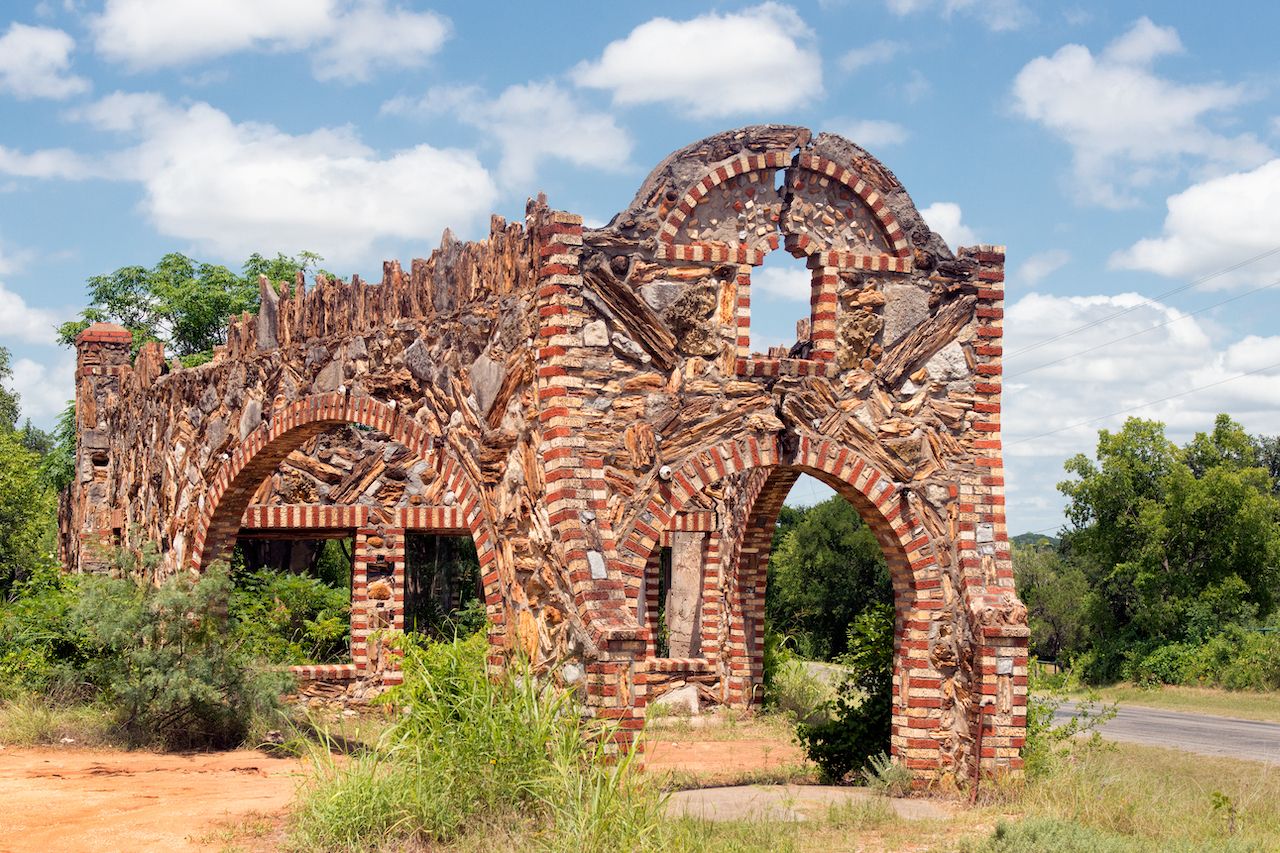 E.F. Boydston built a gas station (on land he paid $400 for) in Decatur, Texas, in 1927. Years later, he decided to adorn the outside with petrified wood.

The 33ft chair was originally built as a promotional effort for Miller’s Office Furniture in Anniston, Alabama. Ten tons of steel were required to construct the chair. 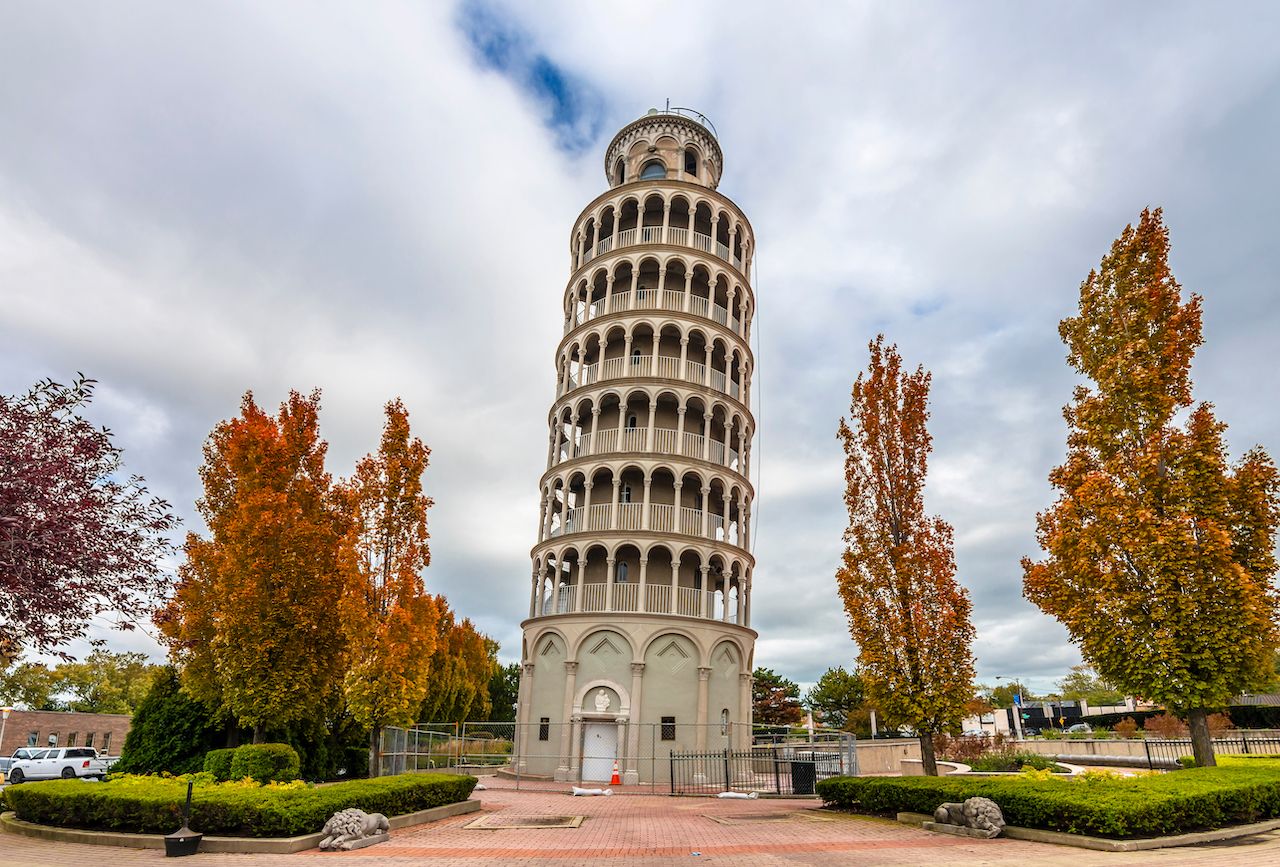 Dinosaur Gardens Prehistoric Zoo isn’t exactly a zoo — it’s a park with sculptures of dinosaurs and cavemen. For some reason, there’s also a statue of Jesus Christ at the front of the park. 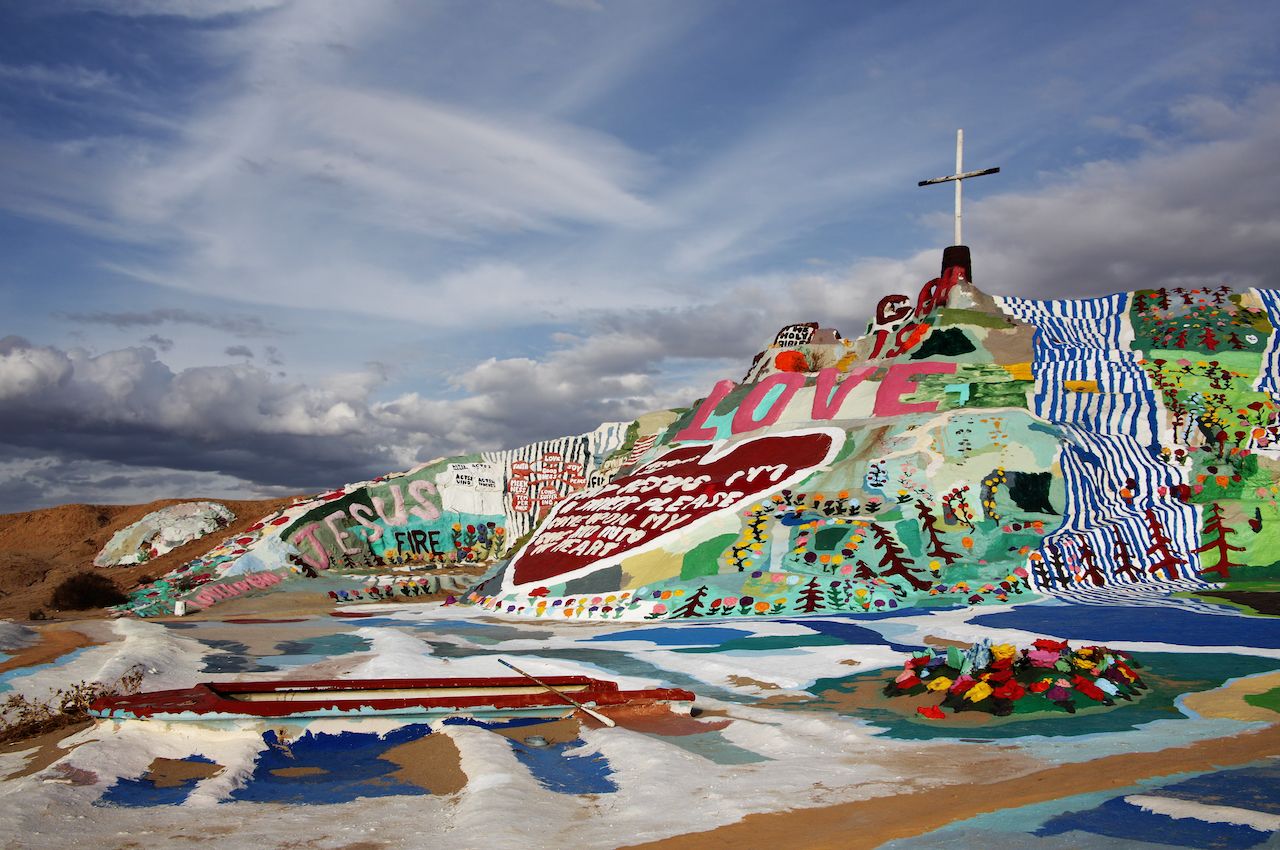 An art installation built by the late Leonard Knight, Salvation Mountain contains murals of Bible verses and Christian quotes. It made an appearance in the 2007 film Into the Wild.

The World’s Largest Ball of Twine in Cawker City was built as a response to the Minnesota town of Darwin’s efforts to grab the title.