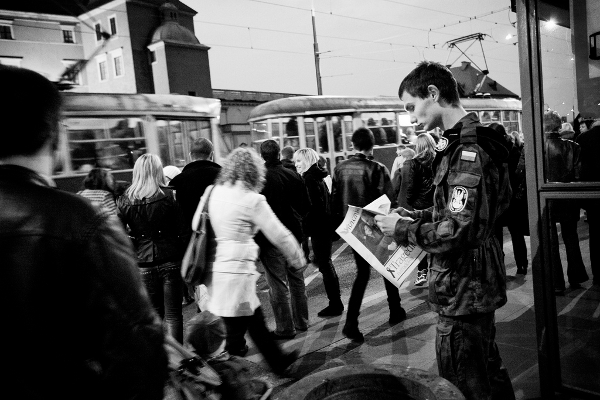 Chelsea Rudman offers some answers to the question, “Why Warsaw?”

I WAS STRUCK by the dominance of the color gray as I walked through the gateway stamped with the blocky letters “Warszawa Centralna.”

I had just happened to arrive in Warsaw on a cloudy day, and the white-washed sky seemed to exaggerate the drear of the city’s low-slung concrete buildings squatting in patches of overgrown weeds. The cars, buses, street stalls, and even stern-looking people all seemed dressed in muted tones, fading towards one color: gray.

I hadn’t planned to come to Warsaw on my trip — I ended up there to apply for a visa — as guidebooks and friends had warned me off Poland’s capital, calling it, well, really ugly.

Indeed, brutally razed by the Nazis and then rebuilt by the Russians in Communist concrete, Warsaw is no looker. But as I explored the gritty streets and learned about Warsaw’s place in Polish history, I started to feel that it deserved a better reputation.

It doesn’t have the glitter and glamour of Krakow’s medieval ramparts and Wawel Castle, but Warsaw, more than most cities I’ve seen, helped me understand the spirit and strength of its people’s nation. 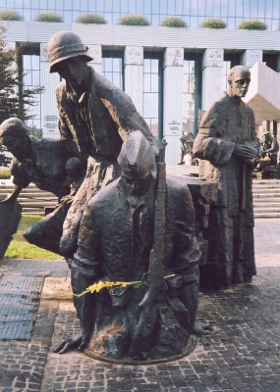 After securing a room in a hostel built in the former offices of a USSR Sugar Committee, I headed for the Warsaw Rising Museum.

This turned out to be an excellent place to start, as it gives a thorough primer on one of the most formative events in Poland’s recent, tumultuous history. I vaguely remembered the words “Warsaw Uprising” from a high school textbook, but I knew almost nothing, before the museum, about the bitter rebellion Warsawians led against one of the strongest armies ever massed.

For close to two months, militias, mostly civilian, flung up barricades in the streets and smuggled weapons through sewer tunnels, struggling to retake their city block by block. Surrounded by the Nazis, with no hope of winning without Allied help, the Warsawians fought their desperate battle until food was so scarce they fried donuts in perfume and graveyards were so full they buried their dead in the streets.

The Allies never came, and when the Warsawians finally surrendered, the Nazis marched the entire population out of the city and systematically demolished it. As my audioguide put it: “We are talking about the evacuation and destruction of one of the largest cities in Europe, the capital of one of its largest countries.”

The museum documents the struggle with cases of militia armbands and weaponry alongside replicas of underground radio stations and torn letters delivered by the Uprising postal service.

I spent nearly three hours here, but even that wasn’t enough to read the text at all of the museum’s 50+ exhibits. At 5 PLN (US$1.50) with my International Youth Travel Card (10 PLN regular price), it’s an amazing value, though the 10 PLN audioguide was probably a bit excessive. 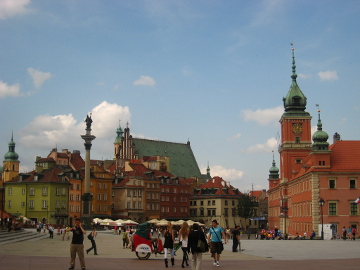 2. The tram and Stare Miasto

I grabbed a rattling tram north towards, I hoped, the city’s Old Town, or Stare Miasto.

I couldn’t decode the Polish route listed at the tram stop, and the cars stopped so often it might have been faster to walk, but the lively, clattering tram ride was a good followup to the sober museum.

It was less crowded than any metro ride I took in the city, and filled with everyone from teens toying with iPods to grannies carrying sacks of cabbage, it made for great people-watching.

Having visited the museum, I had an even deeper appreciation for Warsaw’s “Old Town,” which, unfortunately, isn’t very old anymore. Before the war, the neighborhood housed important political and cultural centers dating from the 13th century through the 20th, but like most of Warsaw, it was destroyed by the Nazis after the failed Uprising.

Miraculously, most of the Old Town has been painstakingly rebuilt, and while the paint jobs looked fresh, many of the buildings seemed so architecturally accurate that it was hard to believe I wasn’t seeing originals.

My tour started at the north end of the neighborhood, at the crumbling, red-brick Barbican, a medieval watchtower with old city walls. I headed south through the arch down a road lined with vendors selling beer-swigging folk dolls and gaudy Polish flag t-shirts, then walked out into the Old Town Market Place to admire the bright pink Royal Castle, where every Polish monarch lived from the 16th century until Poland’s third partition in 1795.

I ducked under an awning to get out of the light rain and snapped a few pictures of the domed roof and clock tower, watched by a few tourists drinking expensive coffee at one of the outdoor cafes.

Further south, the tight ribbon of squares and back alleys opened into the Royal Route, a long street lined with both ancient and modern government headquarters.

I did my best to decode which palace was which using the “Warsaw Directory” my hostel had given me, but the rain was falling harder, and there were really a lot of palaces. I stopped in front of the Presidential Palace, taking a moment to read the exhibit memorializing President Lech Kaczyński, who had died tragically in a plane crash one month before my visit.

Finally, I moved on to the gates of Warsaw University to admire the academic buildings and long courtyards and, more importantly, look for dinner. 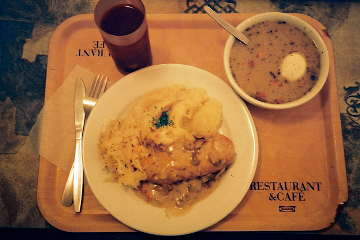 I had vowed to eat local specialties as much as possible on my trip, so I found a pierogi restaurant.

My hostel had recommended a place just south of Stare Miasto called Pierogarnia na Bednarska, tucked around the corner from a small park.

I stared blankly at the Polish listings scrawled on the blackboard for a minute before asking a group of British businessmen for recommendations. They laughed and indicated a stack of English menus on the counter.

I ordered, by pointing, the vegetarian sampler, a plate of tasty dumplings whose fillings included potato and cheese, spiced bulgur and mushroom, and garlicky spinach. It was delicious and, at 18 PLN (US$5.50), a reasonably priced dinner.

My original dinner plan had been to find a mleczny bar. It means “milk bar,” but these cafeteria-style restaurants serve up a wide selection of traditional Polish food. I’d heard their sparse decor, simple food, and long lines made them some of the most authentic holdovers from the Communist era, but the infamous Cockroach Bar I’d searched for near Warsaw University was apparently closed.

I got the mleczny experience the next day, though, while wandering a different neighborhood with Antoine, a French traveler I’d met at my hostel. The Ząbkowski Bar, with plain cloth curtains, plastic chairs, and a badly translated menu, lived up to expectations.

Antoine and I tried to decode the garbled English — what the heck was “chicken thick?” — then wrote our order in Polish on a scrap of paper and passed it to the elderly cashier.

The food was probably the best I’ve ever been served with a steel ladle. And the prices were Communist-era, too: a cucumber salad, plate of pierogies, piece of chicken (“chicken thigh,” as it turned out), and soda cost me 13 PLN (US$4). 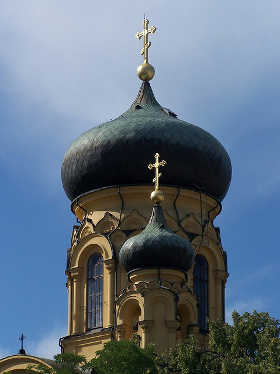 I needed to stay in Warsaw until the next morning to drop off my visa application, but I lingered for the entire day to explore further. Antoine suggested that we check out an older neighborhood across the river, Praga Północ.

Amidst the Communist low-rises, we saw some of Warsaw’s only surviving prewar buildings. The giant blue onion domes of St. Mary Magdalene church, one of very few Orthodox churches in Poland, were visible even before we’d finished crossing the Wisła.

We wandered along the flooded riverbank until we stumbled into a sprawling outdoor market, which Antoine, skimming his guidebook, decided was the Różyckiego Bazaar.

Asian hawkers called to us from behind heaps of baby clothes, slinky dresses, and faux-designer jeans. I bought a long white skirt for 25 PLN (US$7.50) that I somehow loved, though it was too big and looked like a tablecloth.

After our mleczny bar lunch, we walked past the Koneser Vodka Distillery, hoping for a tour or at least some free samples. Apparently tours can be arranged, but we couldn’t find an obvious guest entrance, so we read about the factory’s history on a sign outside before looping back towards the bridge.

As I lugged my backpack past abandoned buildings and shattered windows on my way to the train station, I wondered, again, what had ever made the Soviets prize bleak concrete as a building material. 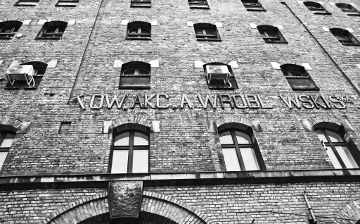 Even with the sun shining brightly, the towering Palace of Culture and Science next to the train station looks like the Adams Family mansion, gloomy and grimy.

But I didn’t like Warsaw because it was beautiful (or not). I liked it because in spite of everything it was still there, once again the heart of a thrice-divided but proudly resurrected Poland.

For another Matador report from Poland’s capital, check out Lauren Lim’s The most kick ass flat in Warsaw.

Tagged
Culture Guides Warsaw, Poland
What did you think of this story?
Meh
Good
Awesome

39 of the most breathtaking natural wonders in the world
Support women artisans in Mumbai on these incredible eco-fashion walking tours
The world’s 5 most beautiful alphabets you’ll never learn to read
7 spectacular national parks to visit this fall
Before you head outdoors, be sure you’re respecting sacred grounds

7 signs this is your first time in Warsaw

Polish prostitutes: Meet the forest whores outside of Warsaw