I’M A COFFEE CHAIN REFUGEE, desperately seeking independent cafes with personality and a cohesive soundtrack for my daily respite, but choosing where to get my daily brew can be like dating. I figure it’s okay to be picky, especially when I’m sharing patio spaces smaller than a Queen-sized bed. In Toronto, this is who I’m heavily attracted to.

I’ve always wanted to be the type of regular that wordlessly slides a toonie across the counter and, with a nod from the barista, is served up a medium-medium roast to go. Just enough room for cream.

Sandwiched between Adelaide and King, Jimmy’s on Portland Avenue is a hive of activity, with folks focused on laptops and tiny fluffy dogs in studded collars holding patio turf out front. I’ve eaten my way through the entire baked good selection and back, but I still swoon over their dense sea salt brownies, sweet potato and pecan muffins as big as baseballs, and butter tarts that rival my grandmother’s best effort. I marvel at the hearts, shamrocks and ferns expertly rendered in the milk foam by Max, Charlotte, Miles, and Ash whose artistry reliably creates a happy 30 minute block in my day.

Soundtrack: Lionel Richie, The Muse, Tokyo Police Club.
Tip: Buy a half pound of the “Dean” (medium roast) or “Hendrix” (dark roast) beans for home ($8 each). 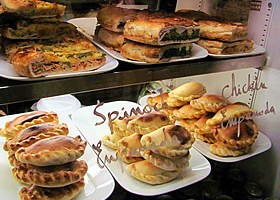 The blackboard menu seduced me. Try the submarino de chocolate — a dark chocolate bar melted in steamed milk ($3) — and cafe caramelo — a latte with a shot of dulce de leche ($3.75). Pair with an alfajor (think: gourmet Wagon Wheel, $2) or a substantial spinach and ricotta empanada punched up with chimichurri ($2.75). Tuck yourself away in one of the dollhouse-like rooms or poke around the wares while you caffeinate and sway to the brooding lyrics of The Wilderness of Manitoba.

Located at the bottom of Bathurst at Niagara, Thor is a showcase of Scandinavian aesthetic. Diligent baristas value perfection over speed. Little Dragon, CFCF, and Ladyhawk gently thump over the purr of the behemoth “Slayer” espresso machine (price tag $15,000 and the only one in the city). 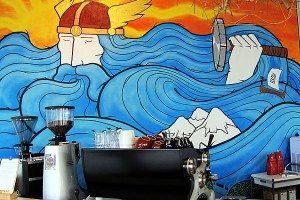 The “Hit & Run” is a clever feature: dopo espresso to stay + dopo house Americano to go ($4.75). “Thor’s Hammer”, or mjolnir ($4), is the equivalent of a blaring alarm clock / cold shower. The sugar and caffeine hit is a one-two punch: two shots of espresso with a dollop of dulce de leche served in a shot glass.

If you’ve already had your coffee intake for the day (is that humanly possible?), Thor sells 100% fruit Asian-Mexican fusion ice pops called el chinitos ($3.50). Flavors rotate, but ask for the spicy pineapple (holy hot ice pop!) and stay tuned for the mango lassi or lychee.

With a collection of over 2,200 unique games and sweet-as-pudding Nutella lattes for $5 bucks, this Koreatown cafe on Bloor attracts a steady stream of gamer diehards and the curious. There is a $5 fee (unlimited time) to play one or more of their shelved classics like Roller Coaster Tycoon, Hungry Hungry Hippos, Q*bert and Adios Amigos. 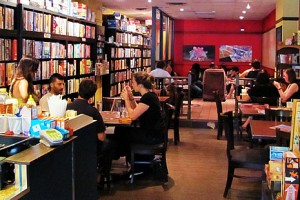 Top old-school choices are Sorry!, Jenga, and Connect 4. Most popular party game? Cards Against Humanity. Other popular picks are Word on the Street, Pandemic, Dominion, and The Settlers of Katan. Their website lists their flabbergasting inventory alphabetically. Check out their blog for game reviews, game designers’ nights, and upcoming tournaments.

Perched on the hill overlooking Riverdale East Park on Broadview Avenue, the view from this cafe is that famous snapshot of the Toronto skyline you’ve seen on postcards. 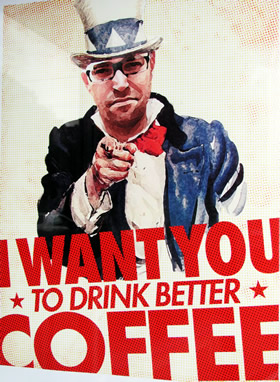 Regardless of the season, there is a definitive linger longer element to Rooster. Ample patio space, a communal harvest table that can seat eight newspaper readers, and well-loved arm chairs provide seating arrangements for intro and extroverts. I routinely beeline for the storefront barstools to lean my elbows on the salvaged wood counter tops.

The double-shot soy latte is like drinking a cloud. Team up with the gentle heat of a Frisbee-sized ginger cookie.

Soundtrack: Bird chatter from the patio, the occasional rumble of the streetcar, and the hum of bike tires and longboarders coasting south.

“I don’t know mediocre,” owner Aman Patel tells me. “There are other people who do that, not me.” Patel spontaneously joined me on the patio and explained the genesis of the Indian Rice Factory’s expansion into the cafe biz. 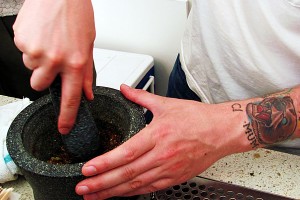 After 42 years, he felt there was a need to reconnect with the local community on a different level, and coffee was the perfect segue. A block from the Tarragon Theater, the Howland Street espresso and chai bar is generating a dedicated following. Once you discover the back patio, a quick coffee can easily turn into two.

I was easily convinced to try the peppery and spice-licked custom chai ($4) ground with mortar and pestle, and they do make an “Indian coffee” which is essentially a latte, but the espresso shot and milk are steamed together. Patel insists on “dippers”: Parle-g brand digestive biscuits (3 for $1) or the Indian rusks for a fully authentic experience.

Soon he will be serving pakoras with tamarind (Tuesday-Sunday) and Indian ice cream. In the meantime, prior to the grand opening in July, Dufflet Pastries granular biscotti and buttery date squares fill the gap quite nicely.