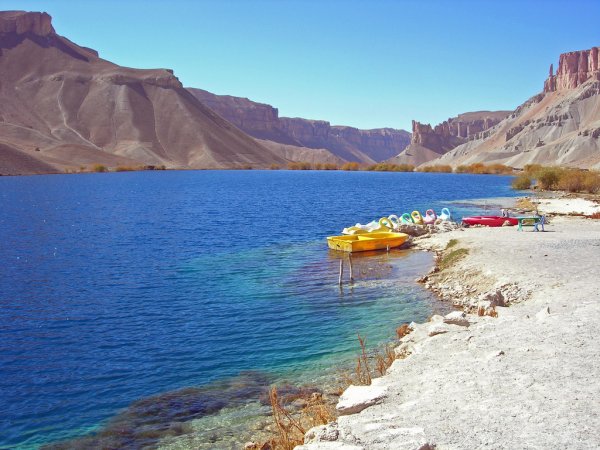 “In the stillness of the high, thin air, the blue and turquoise waters are often like glass, perfectly reflecting the slopes around them.”

Near-continuous violence since the Soviets invaded in 1979 has been effective at erasing Afghanistan from most tourists’ maps.

But it seems the government is hoping for a change with the creation last week of the country’s first national park. In addition to attracting visitors, the park should provide vital protection to a region where it’s been lacking in the past.

Band-e-Amir National Park is located in central Afghanistan’s Hindu Kush Mountains and includes five high-altitude lakes. Nearby Bamyan Valley made headlines in 2001 when its massive, 1,500-year-old Buddha statues where dynamited by the Taliban.

The park’s establishment could also tip the scales in the region’s favor regarding its pending candidacy for UNESCO World Heritage status.

Visitors will still have difficulties to contend with — ongoing military actions being the first that comes to mind, as well as a local fishing method utilizing hand grenades. But the park also offers much in the way of pristine nature, according to BBC reporter Alan Johnston:

“In the stillness of the high, thin air, the blue and turquoise waters are often like glass, perfectly reflecting the slopes around them.”

For more on this fresh travel destination, check out the BBC’s take here.

Alan Johnston isn’t the only one reporting from the ground in Afghanistan. Matador members YoLeven and moshdeh are currently in-country, and they’ve posted a couple killer blogs about their experiences.

Other ideas on travel to protected natural areas, including some as unexpected as this one, can be found in 13 of the World’s Richest National Parks.

Tagged
Travel Afghanistan
What did you think of this story?
Meh
Good
Awesome

How to rock a war zone