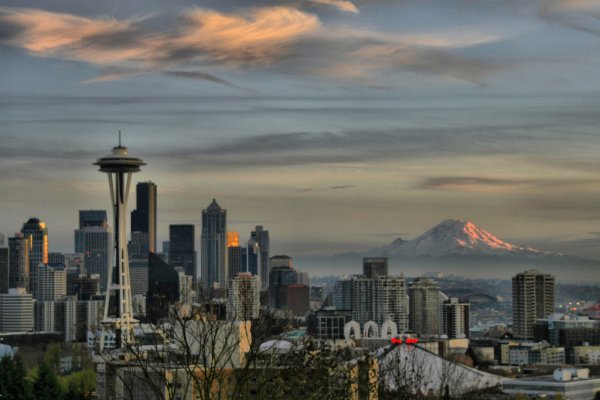 In down economies, trips to Notre Dame, the Egyptian pyramids, and Machu Picchu sometimes have to wait. Luckily, your urge to travel and discover doesn’t have to.

America’s one big place, and while the following destinations aren’t necessarily carbon copies of the big-name international draws, approached with the right attitude these one-of-a-kind sights might just tide you over till your bank account starts cooperating.

You’ve imagined yourself riding up to Petra with your Indiana Jones hat on. Don’t lie. 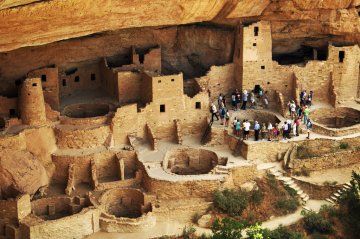 There’s something truly majestic about structures carved into rock; fortunately for Americans the Southwest is an archaeological playground, and a cheap one at that.

You’ll need a park ranger escort when visiting this particular site, which stays open just long enough to let you glimpse the dusk light creeping into the kivas. You might also catch a black bear, coyote, or mountain lion on the hiking trails.

It’s even rumored Spielberg intended to film here but met with objection from local tribes — so have at it, Indy.

There’s something about the Palace of Westminster that makes you want to eat a scone and conquer the world. 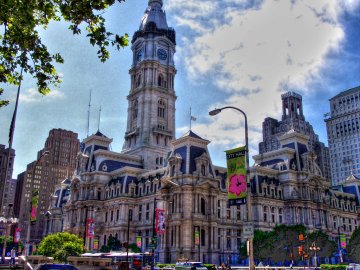 Funny thing is, the city halls of many ‘Thirteen Colonies’-era locales tend to possess a similar architecture — Philly‘s is by no means an exception.

It even has a clock tower reminiscent of Big Ben, and if you get bell withdrawal you can pay a visit to America’s most famous, resting nearby: the cracked Liberty Bell.

Still missing an Abbey? Head across the street to the impressive Grand Lodge Temple, the center of the city’s Freemasonry.

Given the heaps of theories regarding the placement of the Pyramids of Giza, it’s not surprising historians and archaeologists are also fascinated by these dozens of flat mounds scattered in geometric patters — remnants of the mysterious Mississippian culture of almost a thousand years ago.

The nearby museum is currently being renovated, but if you enjoy the whole mound thing then do yourself a favor and check out the UNESCO site of Cahokia in Illinois, which has similar features and is over ten times as big. 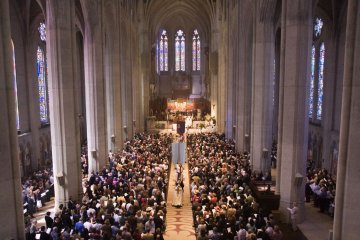 You can check off both French and Italian artistry with a visit to the Gothic Revival Grace Cathedral and its two replicas: the Gates of Paradise that face the Duomo in Florence and the labyrinth in Chartres Cathedral.

You might even feel the hunch creep up your back at the sight of the towering stained glass — especially the intricate Twenty-Third Psalm window.

The all-male choir gives fantastic performances in December, and San Francisco native Ansel Adams’ take on the cathedral’s angles can sometimes be caught in real-life display inside.

What’s better than the abandoned cityscapes of Angkor Wat or Machu Picchu? How about one that’s still in use — just a few hours east of the Grand Canyon is one of the oldest continually occupied settlements in the U.S.

Even more incentive to make it here: the Hopi residents may not allow photos of the site, but they’re incredibly warm to visitors.

These carvings may not be as old as those at Abu Simbel, but they sure are higher up.

The four political giants make for an inspiring visit, and the best part is you don’t have to worry about that temperamental police escort through the windy desert. The light hits Teddy, Tommy, Georgie, and Abe quite well at almost any time of day.

Additionally, you can get your Cold War history fix at a genuine Minutemen Missile facility less than two hours south — they even have a “Self-Guided Cell Phone Tour” for all you DIY-ers. 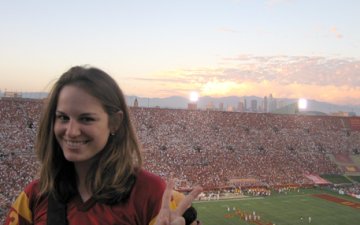 Please your inner gladiator and attend a football game here between USC and UCLA.

The stadium’s hosted the Superbowl, the World Series, and the Summer Olympics twice. Oh, and it can seat just under 100,000 people — twice as many as Rome’s Colosseum.

Maximus would have made one hell of a tight end.

No photo of Shanghai is complete without the Oriental Pearl Tower across from the Bund, and the same could be said of this Seattle icon. Both have revolving restaurants and killer views. Besides, the 45 million visitors since its opening can’t be wrong.

Trekkies and Browncoats might also get a kick out of the science fiction museum right there at the Seattle Center. 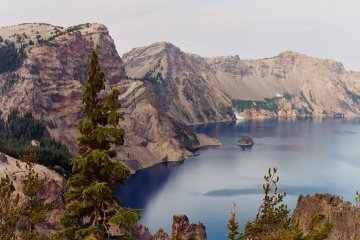 There are no whitewashed towns clinging to its cliffs, but if a volcanic caldera like Santorini is what you’re after, try this crazy puddle.

With no sources in or out, the water is some of the purest and clearest in the world.

In the wintertime, the snow around the rim glistens. You can warm yourself up in the Rim Village Cafe — and you won’t find a better view.

If the travel bug is still biting after you check out these American alternatives, you might be interested in reading about Why You Should Travel During The Global Recession and How To Travel The World For Free (Seriously).