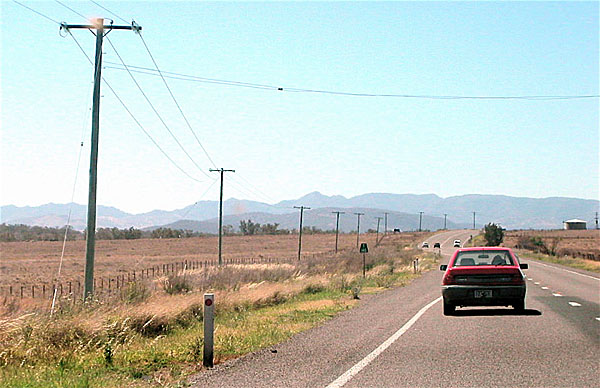 Most backpackers take a night bus for this popular leg in Australia. Here’s an alternative route.

“THE ONLY BEAUTIFUL thing about the Pacific Highway is it’s name,” a Dutch guy told me in our hostel when I explained our planned route. “There is another way to Byron Bay, though.”

From the Blue Mountains, head north to Wiseman’s Ferry — the historic point for crossing the Hawkesbury River. It was from here that Australia was first explored to the north, and it’s now the gateway to the Yengo National Park, the largest in New South Wales.

Although no bridge exists, free ferry service across the river is available. Once north of the Hawksebury, the Settler’s Arms in St. Albans makes for a good rest stop and a refreshment. The walls of this 170 year-old pub are covered with pictures of the village’s ancestors, smiling gamely from cricket pitches and village fetes. 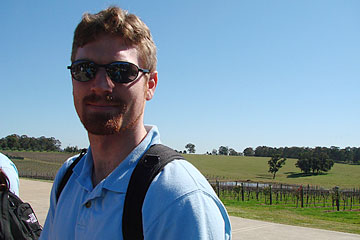 St. Albans is on the Great North Road that follows the original convict road, parts of which can still be seen. The next town is 40 kms north down a dirt road.

“You English would call it a country lane,” the Dutchman said, grinning as he explained the route to us. “Bit long for a country lane though!”

The bumpy drive is worth it for the Kodak moments and that unfamiliar, yet welcoming feeling of complete isolation; we didn’t pass another car. Kangaroos escape the searing heat under distant trees and horses graze, moving from one paddock to another.

The road twists and climbs through the forest, lined by tiny waterfalls on one side and sheer drops on the other before rejoining the wide pastures of the valley floor. The gum trees are apparently full of koalas, but since they sleep eighteen hours a day, they can be a challenge to spot.

The road eventually leads into the Hunter Valley, one of Australia’s best-known wine regions. Viticulture in the area wasn’t set up to make outstanding wines, merely to provide a tourist attraction for holidaying Sydneysiders. Then they discovered they could make some of the world’s best Semillion.

Tyrrell’s in Glenbawn and Polbolkin and the Warraroong Estate in Lovedale showcase some of the area’s finest. 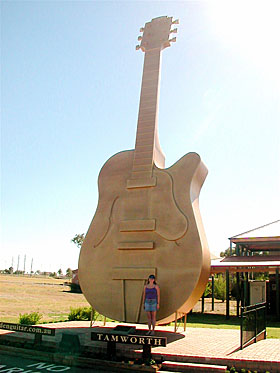 For somewhere to sleep, there is free camping and amenities within stumbling distance of the wineries in Broke.

Tamworth and the big guitar

Next stop on the New England Highway is the country music capital of Australia: Tamworth. An annual festival is held here in mid-January when the celebrities of the country music scene gather in what is otherwise a backwater town.

A ten-meter guitar guards the entrance. Paradise Tourist Park is the closest camping area to the centre and nicely positioned on the river, but one night is enough to explore the town unless it’s festival season.

After Tamworth, Armidale is next up, which is the starting point of the Waterfall Way, along which you can turn off every few kilometers to take one in.

TIP: Make sure you’re fully fueled up before driving Waterfall Way as petrol is scarce. Also, try not to drive at dusk and nighttime; this is kangaroo territory. 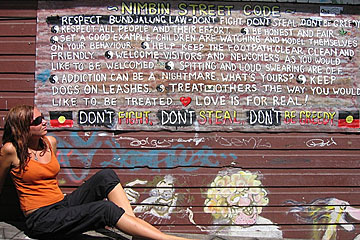 Lonely Planet says, “A visit to Nimbin is highly recommended.” The pun was lost on me until we got to the town.

On the map it looked the same as all the other dusty villages we had passed through, its name in small font on the thin line of a country road. In reality, it’s bright, colourful, and teeming with people smiling sedately through clouds of smoke.

One more stop before Byron Bay

From Nimbin, it’s only one hour to Mt. Warning, Australia’s most easterly mountain and the final calling point on the way to Byron Bay. The 5km, 4-hour trek to the summit is usually started at 3 AM to give you sunrise views. After the descent, it’s only 45 minutes to your destination.

If you have a favourite roadtrip movie scene, why not post it here? The 5 Best Roadtrip Scenes of All Time.

What did you think of this article?
Meh
Good
Awesome
Bookmark
Posted In
Travel
Destinations
Sydney, Australia

10 sides of Sydney that you’ve never seen before

Alaias: How an old-school board is making surfing greener

How to see the largest amethyst cave in the world: Australia’s Crystal Castle

Ruminations on architecture as culture, the value of open spaces, and vans

18 signs you were born and raised in Sydney, Australia