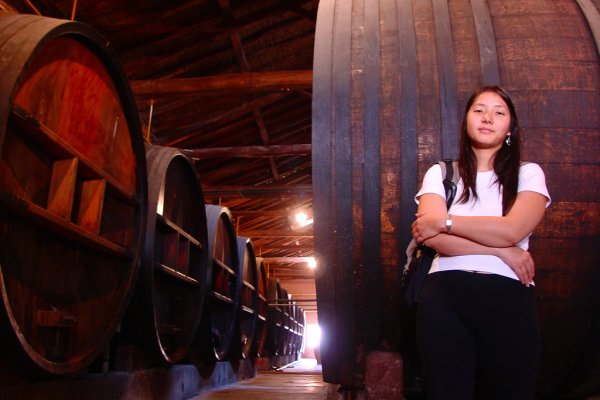 Here’s what you need to know about the most popular tourist activity in western Argentina.

TOTAL GAUCHE travelers may not know Mendoza is the destination for affordable wine tourism.

But gauche or not, most backpackers passing through this western Argentine provincial capital of 110,000 end up hopping on a bike to tour the wineries and bodegas just south of town, in the suburb of Maipú.

This full-on collision of budget travel and established, upper-crust tradition is fun to partake in, but there are lots of ways to do it wrong. Here’s how to do it right.

Maipú is about 15km southeast of central Mendoza. Taxis and remises can take you, but by far the cheapest transport (unless you’ve got a big group) is the city bus. Unlike the buses in Buenos Aires, Mendoza’s run on a card system. They accept coins too, but do NOT give change. 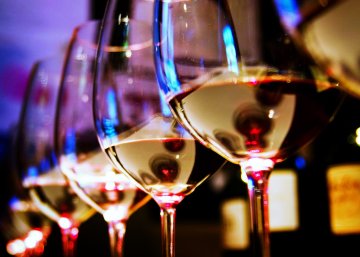 Rechargeable tarjetas Mendobus can be purchased at most kiosks in town, with a 3-peso deposit — a good investment if you’re staying in Mendoza a few days. The fare to Maipú is 4 pesos one way.

If you’re unsure where to get off, just tell the driver “camino de vino.” The main street is Urquiza, and you’ll see the dedicated bike path at the side of the road before you need to hop off.

It’s best to have a bikeshop picked out beforehand so the driver can let you off at the proper stop — they’re not all right next to each other.

The most popular are Coco Bikes (Lonely Planet’s pick), BikesAndWines, and Mr. Hugo, spaced out at various points towards the northern end of Urquiza. 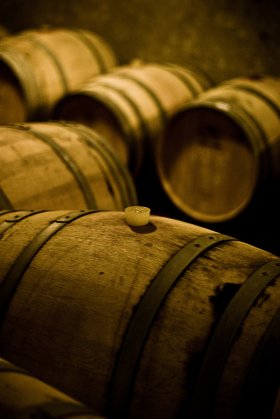 Coco Bikes is pretty cheap (20 pesos per bike per day) and, according to LP, will shuttle you down to the end of the road so you only have to bike back up (I was never able to confirm this).

I can’t recommend BikesAndWines. I talked with a guy whose plastic handlebar had melted off after he left the bike in the sun for a while. He rented from BikesAndWine.

Mr. Hugo appears to have something of a racket going, with flyers in all the Mendoza hostels. My bus driver nodded in satisfaction when I told him that’s where I was headed. The bike was good quality, but the 30 pesos was an overcharge. Try to talk him down to 25.

Each outfitter should provide a crude map of the route and the different bodegas, along with info on how much tours cost at each and how late they’re open.

Basically you’ll be cycling south down Urquiza, with most of the stops off little side roads. Tourist police patrol the area, but if you stray beyond the final bodega on any given road, you’re on your own (there are signs warning you to turn back).

Note: The following recommendations are listed from north to south:

1. On Montecaseros, the large-scale, old-school winery at La Rural has an interesting museum. Admission includes a tasting of one less-than-stellar wine, but it’s free.

2. A bit farther down Montecaseros, A la Antigua is my pick in the liqueur/chocolatier category. It’s a small operation run out of a residence, producing olive oils, liqueurs, hard liquors (including absinthe), and various sweet and savory spreads. The 10-peso tour fee lets you taste pretty much whatever (and however much) you want. 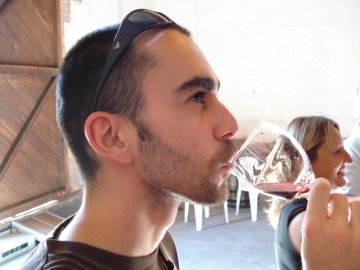 3. Even if this is your first day in Argentina, you may have heard of Trapiche‘s wines — they export widely. Impress friends back home by touring the modern facility, which is on Nueva Mayorga, east of Urquiza. Cost: 25 pesos.

4. Farther south, on Perito Moreno, is another modern operation, Tempus Alba. Admission is a bit steep at 20 pesos, but the grounds are nice, and they offer a tasty lunch menu.

5. By far my favorite was Familia Di Tomaso, right on Urquiza. This is one of the oldest bodegas in the entire region. The 10-peso tour is great value and includes tasting of 6 wines. I also picked up 3 bottles of their 2004 Malbec reserve for just 95 pesos (~$25US) each. Delicious. And their restaurant’s outdoor seating is quite atmospheric on a sunny day. They’ve got the whole package.

6. I didn’t make it down to Carinae, the last winery on the route, but I heard good reports.

Caveat: Don’t expect a tranquil Sunday ride. Likewise, this might not be the best outing for a first-time cyclist. The dedicated bike path you see from the bus lasts only until the first roundabout (maybe a third of the 12km route). From there, you’re teetering on the edge of a fairly busy, narrow road. 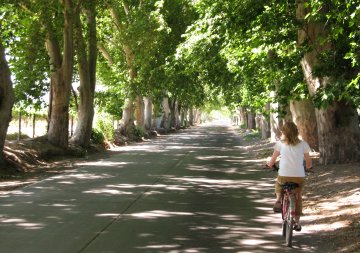 Helmets are a good idea, if your bikeshop provides them. But mainly, if you go in anticipating something different, you’ll likely be disappointed. Browse blogs posts from Maipú to see what I mean.

Check the weather. On sunny days, sunscreen and ample water are needed, whereas for cold and rain (less common) you’ll want waterproof layers.

Packing tip: Make sure your purchases are well-padded and securely closed before putting them in your backpack or bike basket. I opened my pack at the end of the day to find the lid to a bottle of chili sauce had come open, painting everything a nice bright red.

And finally, if you’re just passing through Mendoza and don’t have time for the bike tour, stop by Sastre Burgos, a vinoteca four blocks north of the main plaza on Avenida Mitre. Their wines are delicious and the 15-peso tour includes a tasting of 15 of them.

For broader treatment of the region’s grape offerings, check out Trips’ Escape To Argentina Wine Country. Then, move on to these other Matador wine titles:

Castles, Wine, and History on The Cathar Trail

Tagged
Travel Mendoza, Argentina
What did you think of this story?
Meh
Good
Awesome

20 epic wine regions to visit before you die

10 tips for renting a car in Argentina