Getting to Santa Rosa (the border)

You’ve been on this boat for three days, floating the Amazon from Iquitos, with nothing else to do but cradle yourself in your hammock and read. Before that it was three days in another boat down the Maranõn River from Yurimaguas.

The sunsets, orange and violet and blue like you’ve never seen, still impress, but the riverbank scenery — sometimes dense green, sometimes flat, sometimes with villages of wood houses and thatched roofs, other times villages with packed markets and mototaxis — no longer does it for you.

A family of three sleeps in a single hammock next to you. The boat is full beyond what you imagined possible, and the only free place to sit other than your hammock is the bench directly in front of you, where your boyfriend is now stationed. The man who sleeps next to him and his young daughter are also seated there.

You’ve run out of conversation topics with these people.

The air is strangely quiet considering the constant noise that’s haunted this journey: max-volume music from the bar, babies crying, children running around screaming and bumping into your hammock, men squabbling over card games, and the cry of vendors who board at each stop: “cigarrillos, cigarrillos, cigarrillos,” “periodicos, hay periodicos,” “pollo asado, hay pollo asado señores, polloooo asadooo.” 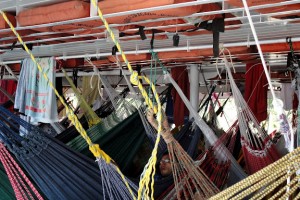 2. Hear everyone say you’re arriving in Santa Rosa. Feel skeptical…you’ve heard it at least three times in the past two hours. Only believe it once you see the bar closing and your hammock neighbour packing up.

Feel self-conscious about your sweaty, unbathed, hammock-imprinted skin as you see made-up girls leave the bathroom. Remember the “turd on the water-tank” episode from day two and trust your decision not to use the showers.

Try to distinguish the three banks at the triple border of Brazil, Peru, and Colombia. As your boat passes an armored navy vessel, think back to the stories of middle-of-the-night pirate attacks the drunken Peruvian told your boyfriend last night.

3. Santa Rosa is a tiny island with not much more than one dirt road, some restaurants, and the police and immigration offices. Your boat doesn’t really stop there, but at an islet just upstream.

Ask your hammock neighbour if that’s the place you need to go, and laugh at your boyfriend when he suggests you might be able to walk or swim it. Instead, try to disembark as fast as you can to catch one of the few motorized canoes revving outside. Be careful on the slippery gangplank that (barely) prevents you from taking a mud bath.

Put a waterproof cover on your backpack; these boats float, but they flood, too.

4. Feel nervous when the immigration officer asks if you’ve been to see the police, even though you have no reason to feel nervous, then relieved when your told it’s part of your border-crossing protocol. Walk to the next building and sit for 15 minutes while a policeman stares at your passport and back at you and hands you a paper saying you have no criminal record. Wonder how he figured that.

Back at immigration, get stamped out of Peru. Take another motorized canoe to Tabatinga (Brasil). 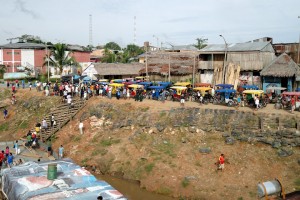 5. If you’re in a hurry to catch the next boat to Manaus, don’t trust the boatman when he tells you it’ll be quick to drop off two other passengers in Letizia (Colombia) first. If he suckers you into it, don’t complain when he can’t find room to dock his boat in Letizia and has to wait; he’ll just say “it’s life.”

Pay him three soles on arrival in Tabatinga and get the change in any of the three currencies, as they’re all accepted in town.

6. Feel apprehensive about riding a scooter taxi carrying backpack and hammocks. Find out there’s one car taxi in town. Pay ten reais and try to rationalize the extra expense. Realize that divided by two it’s only two reais more than the scooters. Ask the taxi driver to take you to immigration and trust him when he tells you it’s the Policial Federal you want.

7. Wait an hour amidst other travelers. Hear their stories and feel happy your Portuguese passport entitles you to enter without a visa. Argue with a Brazilian who tries to cut the queue and gets away with it. Realize it’s pointless. Get stamped for 60 days.

8. Walk to the Porto Fluvial to check if the boat for Manaus really leaves today and discover you have to wait until tomorrow. Feel relieved not to have missed it, but frustrated to be stuck here for the night. Silently curse as you buy your boat ticket for twice what the boats in Peru cost.

Pray for food other than rice and chicken (which you’ll get) and bathroom water that’s not brown (which you won’t).

Midday sun, your soggy backpack, and the apparent ugliness of everything around you start taking their toll as you look for a place to sleep. There’s trash in the streets. The houses are blocks of partially painted cement, some with holes in the walls. From a balcony, some drunk people yell in your direction. Breathe deeply, don’t let the crankiness show, and keep walking.

9. Find the street with the three pensões. Stay at any of them; they all look bad and cost 20 reais (12USD) a night for a double with a bathroom separated by a curtain. Take a cold shower (because it’s hot and because there’s no other option) and start feeling better, almost smiling at the hand-sized spider on the wall next to you.

Eat salad and pasta at the “by weight” restaurant. Ignore the alarm in your head while swallowing the fresh veggies you don’t know how / if were washed. You need them after a week of rice-and-chicken diet. 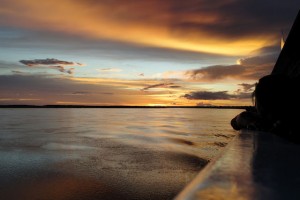 10. Withdraw reais from the ATM at Banco do Brasil for the next four days on the boat. See the people walking and driving along the palm-lined main avenue, back and forth from Letizia, Colombia. Wonder about the absence of border control.

Realize this part of town is not as depressing as where you’re staying, but it’s still not pretty — too many warehouses and too much trash.

Relax and sleep the rest of the day.

11. Get to the Porto Fluvial to catch the boat two hours in advance like you were told; the queues are already enormous and will keep growing behind you. Everyone is wearing flip-flops and carrying bags full of presents except the four German-speaking guys in front of you.

Feel a bit nostalgic for Christmas at home.

Learn from the Brazilian girl behind you that the boat will be overbooked because it’s the holidays. She’s very happy you speak Portuguese and doesn’t stop chattering. She’s going home on break from university. Stutter a shocked “sim” when she asks you if Portugal is a country in Europe.

12. Peek at the front of the queues an hour later, when you see movement. Notice the border control you thought to be lacking — army men carry shotguns and shout orders, bags are lined up on the floor for dogs to sniff. In the next room the same bags are hand searched while people stand in line, arms and legs spread, waiting their turn.

13. Post-dog-sniff, watch the German-speaking guys try to get their tickets. They’re told the boat is sold out. They try to explain in English that one of the vendors told them, four hours ago when they got there, that they should buy tickets when boarding the boat. No one understands them.

Help them out by translating and then putting pressure on the vendor who made the mistake. It works. They’re Austrian and will follow you for the rest of your Amazon journey.

Work it with your boyfriend and the Austrians to leave the maximum space possible between hammocks to be able to move on and around them but not enough that another hammock can fit between.

14. On the boat, get to the top floor. Your travel guide says to avoid it because of the noise from the bar. You know better by now (it’s always cooler and less crowded, and loud music is better than loud engines), plus you saw how full the other two floors already are.

Start putting up your hammock. Take it down when a crew lady tells you you can’t put it up here. Explain there’s no room below. She states there’s plenty and people can only come up top when there’s no more. She sounds angry and turns her back when you’re still speaking.

15. Look at the queue still outside and wonder how the hell everybody will fit. Downstairs you see hammocks, people, and bags set atop one another in rows so close you can’t see the floor. Go back up.

A guy from the crew (probably sensing your desperation) advises you to keep your stuff in a corner and wait. When more people get aboard they’ll allow hammocks here. Explain what’s happening to the Austrians. Hold your ground even when the lady comes back screaming; 30 minutes later permission is officially given.

16. Put up your hammock next to a wall, on the first row from the outside. Work it with your boyfriend and the Austrians to leave the maximum space possible between hammocks to be able to move on and around them but not enough that another hammock can fit between. It’s a very delicate balance and requires sitting on them to occupy as much space as possible.

Stay there until you’re sure no one else needs room and convince a pushy guy that his hammock couldn’t possibly fit between yours and your boyfriend’s.

The boat has been on the water 30 minutes. Breathe deeply and realize you’ve been clenching your teeth for the past hour.

Relax in your hammock. Before your eyes close, notice the river getting wider and the jungle closing in on the banks. Your last glimpse will be of enormous palm trees towering above dense jungle. It’s impossible to see beyond the first line of trees.

17. Wish for pink dolphins and more beautiful sunsets (which you’ll see) and monkeys (which you won’t, but boy will you hear).

5 Lessons in Responsible Tourism I Learnt in the Peruvian Amazon