JUST GETTING INTO A COUNTRY like the U.K. as a tourist can be a nightmare (Tom Gates has that story). When you’re hopping in and out on a visa run, success is even more dubious.

Will you have to relate all the intimate details of your life again like last time, or will you glide through like a ninja tooth fairy, the way you did the time before that?

Ultimately, your success depends on your preparedness, flexibility, and — ahem — sobriety. Here are the steps to take when your visa’s clock needs another windup.

Round One: Choose Your Opponent

1. It’s inexplicable how the post-flight frenzy inevitably puts your entire plane (and five others) ahead of you in line. This, however, is a gift, as it gives you a few extra minutes to watch the victims up front interact with your potential suitors — allowing you to make an educated decision.

2. Should you select the same or opposite gender? This is tricky. If you’ve been considered attractive by someone other than your mother and spot an immigration officer who might agree, go for it and skip to step 5. Keep in mind that after a cross-country flight everyone somewhat resembles an inbred swamp creature.

3. Scout for any old man that might drop presents in chimneys or an old woman whose grandchildren you might resemble. If they’ve worked this long, they probably lost the chip on their shoulder and replaced it with a soft spot. 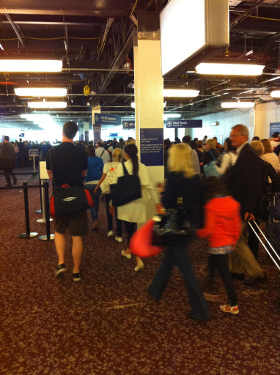 4. Newbies, 30-somethings, and anyone who reminds you of your least favorite schoolteacher should be avoided at all costs. Anyone aware that your future happiness depends on the stamp in their hand already has the advantage.

6. With a group or a buddy of the same sex, you are now officially BFFs — even if s/he abandoned you in a bar at four in the morning last night for a local fling. Being close as a unit gives off a trustworthy vibe. Your stories must align exactly. People often get held for mismatching details that sound fishy. Be familiar with step 9, especially.

7. With a partner or buddy of the opposite sex, same goes: leave any outstanding issues at home. Stay close — one of you might not even need to speak. Glowing like honeymooners (even if you break up in baggage claim) might score you bonus points.

8. If fate put you in the wrong place in line and you’re about to be directed to any of the sadists mentioned in step 4, ABORT. The easiest method? Tying your shoe. Wave the people behind you ahead until your immigration soulmate is available.

Round Two: Work the Story

9. Deliberately leave out anything unseemly about yourself — that includes your wallet being stolen and/or that disease you may or may not have. This seems obvious, but you’d be surprised what some people admit to in order to evoke sympathy (i.e., if you got smashed on the plane, and they haven’t noticed yet, best not to point this out).

10. Manage your appearance. Scrub away offensive forehead tattoos your friend may have drawn last night. Even if you’ve been bunking with questionable company, try to look like someone who can tell shampoo from detergent. 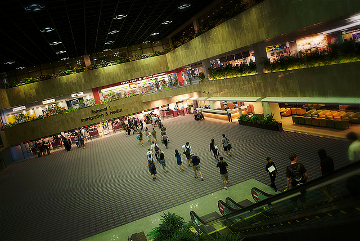 11. If you have a recent bank statement proving you won’t mooch off the system, bring it. If not, consider asking a trusty relative to transfer a few hundred bucks in there — just for five minutes so you can print out the proof (bribe them with kitsch from your travels; this never fails).

12. Bring all supplemental materials that might help: contact numbers, medical records, proof that your reason for needing an extension actually exists (rental contract, wedding invitation, concert tickets, etc). Your best bet is an e-ticket for a return flight out of there. Consider booking a low-fare flight somewhere fun (big shout-out to Ryanair) so you have the proof but won’t mind eating the cost if you choose to miss it.

13. Like poker, everyone has a tell. When they ask why you’re coming back, observe what words they respond to. Are they impressed with your imminent law degree? You’re scouting the esteemed universities while you’re visiting, of course. Do they perk up when you describe your friend/host’s pet? You need to feed it in the next two days, or it will surely meet a gruesome death.

14. If a certain angle isn’t working, ditch it. Don’t backtrack or explain too much. Be succinct, casual, and confident. Remember, they’re trained to people-read and see thousands of fools like us every day. Be politely and sincerely engaged in the conversation at hand, but don’t lurk on them while they type. If you don’t look concerned, they’ll have no reason to be. 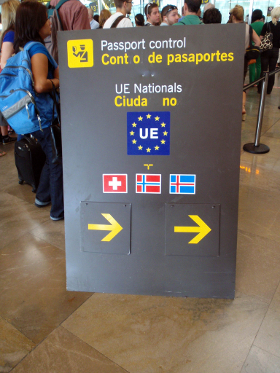 They’re not buying your story. They’ve found a loophole. They’re hormonal. For whatever reason, you’re still standing there awkwardly while Hilda and Gunter in the next booth pass through hassle-free. You’re starting to sweat.

15. It’s time to budge a little — provide an end-date. If you hoped for a three-month stamp, offer to finish your trip in a set number of weeks instead. It’s better than being in your hometown this time tomorrow. Chances are they’ll offer you a buffer period or just give you a strong warning.

16. If you were going the sincere route before, now’s the time to be creative. What dire reason made you return? A professional contact? A friend’s sick relative? Spiritual research?

17. If creativity didn’t work earlier, now’s the time to be sincere. Freely admit how passionate you are about visiting, but have a valid reason (besides the baklava).

18. If it comes to dire straits, chance turning the waterworks on — mildly. Can’t cry on command? Look pensive and confused. Try to make the I.O.’s emotions (if they have any) win over their professional instincts.

Round Four: The Exit

20. Rusty’s Rule: Remember what Brad Pitt’s character Rusty says in Ocean’s Eleven? “Don’t use seven words when four will do… Be specific but not memorable, be funny but don’t make him laugh. He’s got to like you, then forget you the moment you’ve left.” Wise words.

21. Klung-clunk. Next! Congratulations — you’re recharged, your bedtime’s been extended an extra hour, your ex has given you another shot! Go celebrate. Now that your game has gone into overtime, be careful not to take any unnecessary risks. And above all, don’t forget or try to overstay your visa’s new expiration date.

Make the most of it this time!

For something a little different, check out David Miller’s Notes on Backcountry Visa Renewal.