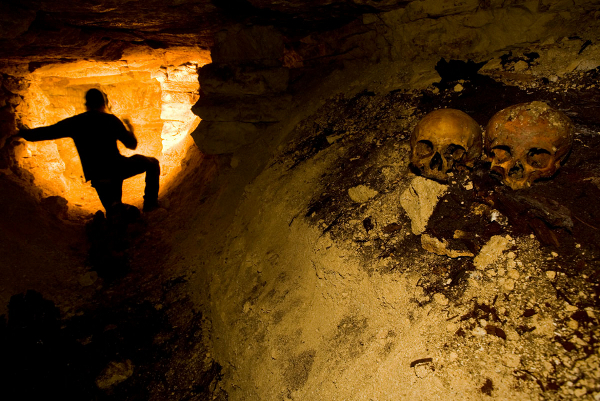 All photos courtesy of Steve Duncan. All rights reserved.

Olivia Dwyer speaks with Duncan about why he likes to climb around in sewers and what advice he has for prospective urban explorers.

[Editor’s note: Make sure to check out Photo Essay: Exploring Sewers, Utility Tunnels, and Catacombs Around the World, published yesterday at Trips.]

Steve Duncan has been an urban explorer for over a decade, first venturing underground as a student at Columbia University in New York City. Since then, he has entered underground worlds across the United States and Europe, including the limestone quarries under Odessa in the Ukraine and caves used to store beer by breweries in St. Paul, Minnesota.

In 2004 and 2005, Duncan hosted the Discovery Channel show Urban Explorers, and he has appeared on the History Channel as an expert on New York City’s underground. Most recently, his expeditions — and his photography — got some press following a week-long expedition into underground Manhattan with Erling Kagge, a Norwegian polar explorer.

But he keeps it all in perspective, saying, “I think that ‘urban explorer’ is a way of saying I’m an explorer — but not a real explorer, so don’t expect me to walk a long way.”

Now he’s back at grad school in California, where his studies in public history keep him away from storm drains and train tunnels more than he would like. He took some time during office hours to talk about how to become an urban explorer, why he spends time wading through sewage with cockroaches, and the history lessons he’s learned underground.

OD: Where did you get the skills that translate into urban exploring? 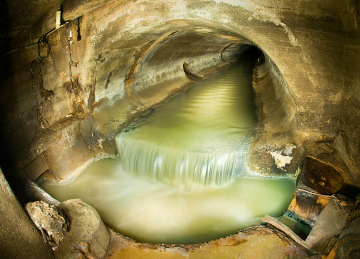 SD: Most of it just kind of happened along the way. I came to New York to go to college at Columbia University. I fell in love with New York right away and started off my urban exploration by doing all the touristy stuff. Back when I first came, I thought of going to Times Square as a crazy exploration.

About midway through my time at college I took my first urban history class … and thought this is interesting stuff and I started seeing the physical traces of it in New York. Over the next few years, as I was poking around, that was the period that I just started doing the things I do now.

I tried to drag along friends who took photography classes and had cameras and they were not enthused, or they didn’t get what I envisioned. I got my first camera and took nothing worth saving for the first two years. I picked up photography that way and fell in love with it. …

I did get into spelunking a little bit, but that was at the same time — I’m trying to remember now if I went into a natural cave or went into a train tunnel first.

What do you need to have in your bag to explore the underground in an urban environment? 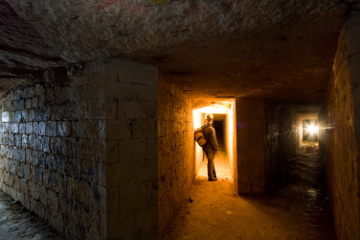 When I go to sewers, that’s probably the most gear-heavy, and then it’s hip or chest waders, and an air meter.

I try to take some kind of gloves for pretty much everything at this point. Especially after a couple years ago, when I had a minor fall in an underground river and something punctured my hand. By the next day it was this infection and I came close to losing the hand or the arm. I was in the hospital for 10 days.

The standard caver rule is at least three sources of light. For train tunnels where you’re closer to civilization that might not be necessary, but for sewers, I think that’s definitely a good rule to go by. A headlamp, a backup flashlight, and then a little light. For sewers, I’ll try to wear something like a soft-shell jacket that I can zip up around my neck.

Depending on the city there’s different fauna. In London, I saw a lot of rats in sewers, and in New York there’s a lot of cockroaches. There’s nothing that creeps me out more than seeing giant massive cockroaches lining the wall of a tunnel and thinking of them dropping down and getting into my shirt.

You mention cockroaches and sewers, two things most people try to avoid at all costs. What draws you back to these places?

It’s just really fucking cool. I love most the older, Victorian-era construction underground. I keep going back to sewers because those are just the prime example of this amazing urban infrastructure that is so rarely seen, so easily overlooked, and so vital to the cities today, as well as to the historical approach to the city. But it can also be true of train tunnels and utility and steam tunnels.

I never like having to try to put my tripod away in my backpack when there’s bits of shit and toilet paper stuck to the bottom of it.

I really love the excitement of being in this [space], of having it to yourself, in an incredibly huge, densely populated city and having this really vast arena that you can explore. … It becomes more exciting the more you realize how important these things are. You look at something like Haiti and the cholera outbreak there — that’s inadequate sewers. There’s the excitement of knowing how a good city works.

I never like having to try to put my tripod away in my backpack when there’s bits of shit and toilet paper stuck to the bottom of it. Sure, that’s nasty, but a healthy sewer actually doesn’t even smell that bad because it’s flowing — [it smells] kind of like a barnyard. Unfortunately, a lot of the older sewers aren’t that healthy and you get a lot of really nasty areas. But, you know, if it was easy everybody would do it.

What do you think you’ve learned by traveling close to home, delving into layers of a city that most people never see? 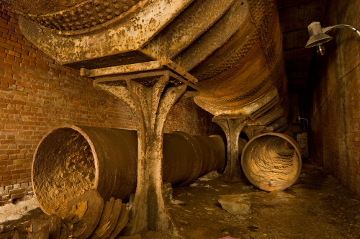 I think the past is somewhat like a foreign country in a lot of people’s heads, and I definitely started off with that excitement, that time capsule thing of going to see a place underground that’s connected to the past and feeling that I’m setting foot in a place that took me back 100 years.

I don’t exactly see it that way anymore. I see it as something where there is both past and present. Realizing that it’s not alien and that that change can take place over time makes you realize that we do have — it sounds like a cheap inspirational thing — but that we do have the power to make change ourselves.

In December, you did an underground expedition in Manhattan with Erling Kagge, a Norwegian who explores natural wilderness. Did you share a common language and a similar approach?

What’s always hard for me to find is people who are not just willing but excited to do really dumb things with me. …

Erling was super excited about it, he was like, “Yeah, definitely, not only am I in love with spending a week underground but I’m so excited about it that I’m going to provide the willpower and the motivation.” Which was very important to me… to that extent, I think the spirit was really similar, what I considered an excited foolishness.

I think that Erling has a commitment and a self-vision that far exceeds my own.

Has there ever been a moment where you’ve gotten yourself into trouble or experienced something that made you think twice about doing it again? 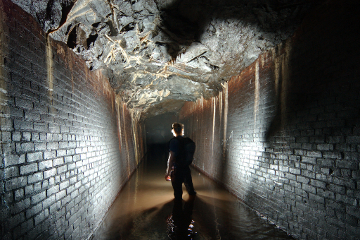 If you were to walk blindly out into the street crossing Broadway at noon and almost get run over, it wouldn’t make you rethink crossing the street, or living in New York. It would make you think, I’ve got to pay more attention to where I’m going.

It’s always been like that — I’ve always thought, I need to be more careful and not do really dumb shit. I haven’t known it was dumb shit when I’ve done it; it’s only afterwards that I realize there are these hazards there that I need to pay attention to.

What do you tell people who ask for advice on how to start urban exploring?

I say research history and poke around, because history a lot of times is really boring by itself, unfortunately, when you don’t associate it with a part of the real world. And when you just run around exploring, a lot of times that can be fun but it doesn’t communicate any stories. But when you do a bit of both, it can tell you a lot about places and it makes both a lot more exciting.

When people ask me about, specifically, “I really want to do urban exploration, what tunnel should I go into or what should I climb?” I tell them I can’t really recommend that they do anything illegal, and that it wouldn’t be exploration if they had a guide. But I wish them luck. I do think people learn more when they discover it on their own, even if it’s something that everyone else in the world knows.

Visit Undercity.org to see more of Duncan’s photography and watch a video of his explorations.

For more on the Paris Catacombs, check out Below Paris: How to Get Under the City of Lights.