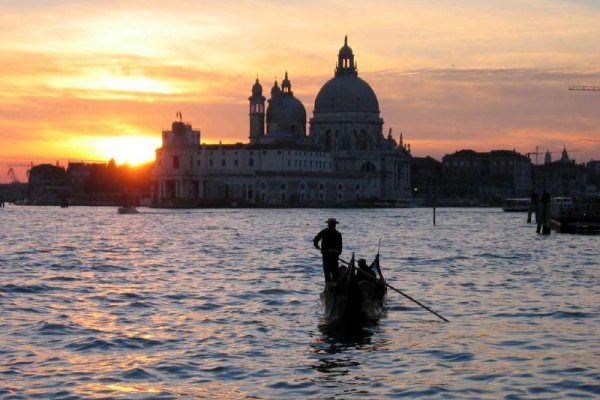 Venice has a reputation for being expensive, but many of the city’s most interesting sights are actually free.

One of the world’s greatest open spaces. While it’s also a honey pot for swarms of day-trippers and other visitors, the Piazza is vast and backpackers coexist peacefully with the well-heeled tourists who enjoy overpriced drinks and orchestral music at the café tables. 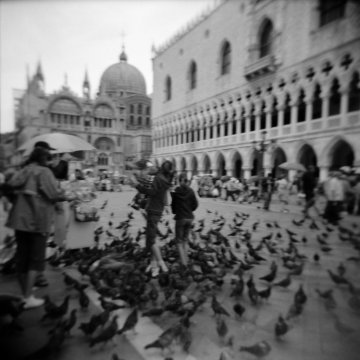 The only trouble is the kamikaze pigeons. Some Venetians claim that pigeons outnumber the tourists. Certainly there are plenty of them. And they fly with abundant ammo.

Tip: Pigeon victims suggest letting the poop dry before brushing it off; this may work on clothing, but it’s less effective when a balding scalp or your vintage Carrera shades have been targeted.

St. Mark’s Basilica is both a house of worship and a monument to kleptomania. It was built to house the bones of St. Mark, whose remains had been stolen from Egypt by Venetian merchants; and the building is filled with sculptures, religious objects, and other booty hauled back from Constantinople and other faraway places during the Crusades.

The cathedral’s five-domed exterior is a riot of Byzantine architecture. The interior is equally spectacular, with gold mosaics that come to life from 11:30am to 12:30pm, when the church is illuminated.

The Grand Canal is the main aquatic thoroughfare in central Venice. The S-shaped waterway follows an ancient riverbed from the Tronchetto parking island all the way to Piazza San Marco.

The best way to see the canal is by riding the No.1 waterbus from the railroad station in the direction of San Marco — preferably in the evening, when the palazzi along the canal are floodlit or illuminated from within.

As the vaporetto waterbus zigzags between stops on both sides of the canal during its 40-minute journey to San Zaccaria, you’ll pass under three bridges and see dozens of palaces built between the 12th and 18th centuries.

Another perspective from which to see Venice is offered by the bridges that cross its canals: the Ponte degli Scalzi, the Rialto Bridge, and the gorgeous wooden Ponte dell’Accademia. 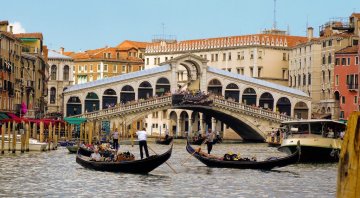 Go to the top of any of these, find a place at the railing, and watch the constant stream of waterbuses, barges, water taxis, police boats, ambulances, and gondolas pass by below.

The Rialto is the one everyone wants to see. It’s been the main pedestrian crossing between the two banks of the Grand Canal since 1591.

The shopping arcade that runs up the center and over the top of the bridge was built for a structural purpose: the rows of covered arches help stiffen it, allowing 24 feet of clearance for boats — including the galleys that existed in the 16th century, when the bridge was built.

If you’d like to ride a gondola but aren’t willing to spend €100 or more for the privilege, you can cross canals in a traghetto gondola ferry for pocket change — the best transportation bargain in Venice.

The Rialto Food Markets are working markets where Venetians do their grocery shopping six days a week. There are two markets north of the Rialto Bridge in San Polo. 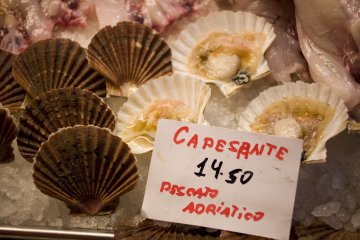 The Erberia sells fruit and vegetables. By noon, most of the action is over, so arrive early for shopping and discreet photo shoots. Just beyond this, fishmongers at the Pescheria sell fish, octopus, squid, clams, and other aquatic edibles.

Before bellying up to the crushed-ice trough to take a snapshot, remember that the person you’re elbowing out of the way may be a chef trying to buy the sardines or cuttlefish you’ll be eating for dinner.

Venice’s Ghetto was the first segregated Jewish community in Europe. It has several interesting characteristics, like the low-ceilinged, multistory apartment buildings built to accommodate a dense Jewish population, and the upstairs synagogues that served Jews of different nationalities.

Venice’s Jewish population fell sharply during WWII, but it has grown in recent years because of an influx of Messianic Jews from the United States. So if you see men in black hats and side curls, there’s a good chance they’re from Brooklyn.

To experience the “real Venice” (and no, it isn’t completely gone), head into the side streets away from the major thoroughfares and the big squares. 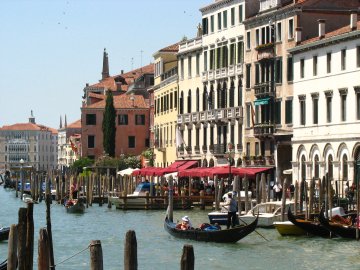 Just as important, you’ll see how Venetians live. Today, only about 62,000 people reside in the historic center (compared to the 180,000 in the heyday of the Venetian Republic), but they still hang out in neighborhood bars, shop from local vendors, and hang their laundry from clotheslines above the street.

Besides St. Mark’s, the largest of the no-admission churches is another basilica: Santa Maria della Salute, which is near the mouth of the Grand Canal and the Dogana, Venice’s old customs house.

The massive eight-sided building sits on more than 100,000 wooden pilings. It was completed in 1681 as a “thank you” gift to God and the Virgin Mary for allowing the plague to kill only one third of the city’s residents. Salute means “health.”

Check out the links below for more details on visiting Venice:

What did you think of this article?
Meh
Good
Awesome
Bookmark
Posted In
Travel
Destinations
Venice, Italy

Dear travelers to Venice: Please don’t come until you have understood these 11 things

A run through Venice

Carnival in Venice is lame

On not seeing Venice in Venice

10 places to see before they disappear

Venice Carnival: One of the world’s sexiest parties