Horseback riding looks so romantic in the movies. It’s not.

I’ve made notes-to-self on this before, but I forget, and so I’ll message myself again: Don’t book a massage appointment the day before horseback riding, because you’ll undo all the feel-good after 30 seconds of trotting. Come to think of it, just don’t go horseback riding. Ever.

We’d been cooped up indoors drinking mojitos at Las Cuevas Hotel in Trinidad, sidelined by Tropical Storm Isaac, again. Our Adventure Center (now Exodus Travels) guide, Leo, suggested that we sign up for a horseback ride into the Valle de Ingenios to El Cubano in the morning. Mid-ride, he said, we could take a plunge in the Rio Guaurabo and picnic at the foot of a waterfall.

Over 20% of Cuba’s land is environmentally safeguarded, which ranks it amongst the highest of any nation. The reef system, mangrove swamps, and dense tracts of rainforest near Trinidad are teeming with unique species, like the Little Goblin Bat, the prehensile-tailed hutia, and the world’s smallest bird, the bee hummingbird. I wanted to get into the thick of the forest to see one myself.

Our cowboy guide, Yariel, was straight off the cover of a Harlequin with his sideburns, a suave smile, and dusty jeans. He easily lifted all of us onto our horses, even Francis, who towered over him at 6’3″.

My mount was Mauritio, a muscle-bound, silver and grey speckle-coated horse. Yariel handed me the reins and placed his firm hands on mine, demonstrating the proper hold — one-handed steering. He showed me how to turn left and right by pulling on the reins attached to a bridle in Mauritio’s mouth. Pull back? That meant stop or slow the hell down. It seemed easier than learning to drive standard. 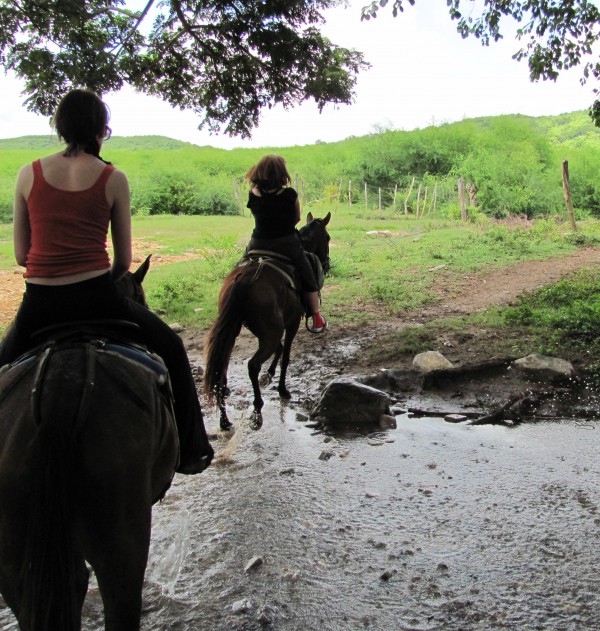 Our tour would take us through the cobblestoned streets of casco historico (old town) and break right into the misty hills of the Sierra del Escambray range towards Parque El Cubano. I looked at the vultures reeling above our heads. The sky was cloudless and impossibly blue — we would not be rained upon. I pointed out the mockingbirds trailing us to my tour-mate Jacqueline before they looped off into the sugarcane fields.

I felt a bit sorry for Mauritio as soon as we cut left to the main road. Trying to walk on cobblestone in flip flops was near impossible — I couldn’t imagine doing it with slippery hooves. Leo told us to rest assured that horses in Trinidad wear shoes with protrusions on the heels called “caulkins” or “caulks” for additional traction.

We’d been told to wear long pants, but I couldn’t bear my jeans in the soupy weather. Even in my capris the humidity was unbearable. Mauritio had a penchant for puddles and the deepest sections of the river anyway, and after the first crossing I was caked in mud up to my knees. When a farmer casually passed on horseback, Mauritio gave chase, jockeying for position. My tour-mates had competitive horses as well, who constantly vied for the lead, seemingly oblivious to their passengers.

I was soon lacerated like mad from thorn trees on the side of the path. I was certain I could feel trench foot coming on. The muscles in my back were cement, the massage I’d had the previous afternoon, evaporated. When another group of riders tried to nudge by, my rogue alpha galloped to the lead, abandoning my tour-mates with such speed (and in a wake of mud) that I quickly lost sight of them. I had to wait, helplessly, until Yariel caught up and reunited me with the group.

We stopped for fresh sugarcane juice. “Guys, it’s our Cuban Gatorade,” Leo promised. Two men worked in tandem, stripping the thick husk from the bamboo-like cane stalks. Taking turns feeding the canes into the primitive juicer and cranking them through the steel plates of the press, we watched our juice squeeze out into a pail. It tasted like diluted celery or cucumber water, with a tart smack of lemon. Cane juice has the same amount of calories as table sugar, but it’s loaded with trace minerals and vitamins. A glug of rum would have made it even better.

Later, we arrived just downriver from the promised waterfall, our bladders full from the sugarcane juice pit stop. Yariel picked us off our horses with a broad smile and a “bueno”? He pointed upstream as he tied up the horses. “Seven minutes, you will see. Waterfall.”

The 60-foot ribbon cascading into a deep turquoise pool was an oasis. Other riders and hikers had already gathered on the slippery rocks. Braver types were cannonballing and diving in headfirst from rocky outcroppings. I was still walking off my horse legs. I felt like I was trotting, even at a standstill. 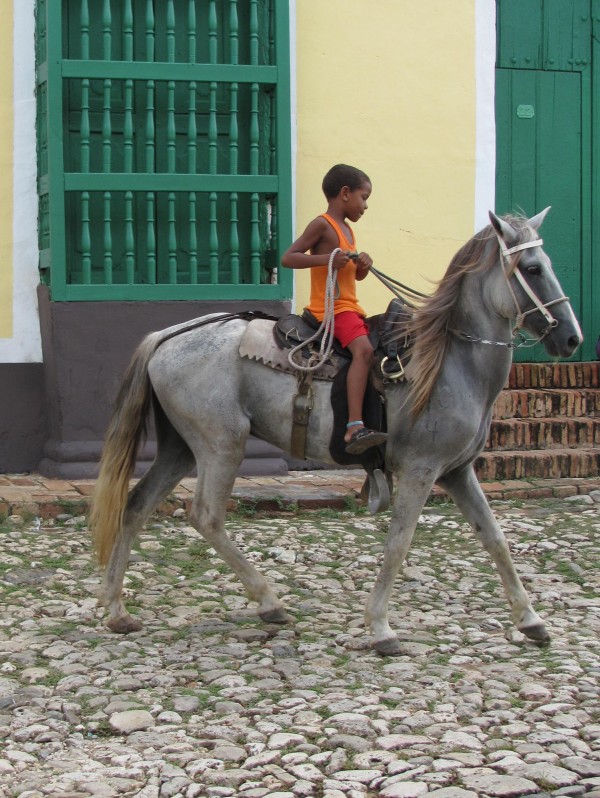 I dipped my feet in, numbly eating my stale ham and cheese sandwich, and struggled to find a comfortable position on the rocks. I couldn’t stop thinking that we had another 1.5 hours in the saddle until we were back at the hotel.

When we returned to the horses from our lazy lunch at the falls, I asked Yariel to show me the proper riding technique, demonstrating my experience thus far with a pantomime. I slammed my bum against an imaginary saddle and winced.

“Sorry, my English is not so good. But, you know salsa dancing? Like that,” Yariel said, moving his hips in a fluid figure eight. And at that moment, I lost all hope.

Horseback riding tours can be arranged through a private operator at Hotel Las Cuevas (visible on the hill above town) with morning or afternoon departures for CUC$25.

It’s suggested that you pack your own lunch and water. Beer, juice, pop, and halved coconuts with honey are available for purchase at the waterfall. Sugarcane juice is sold midway for CUC$2. Suerte.

[The author is a Matador Traveler-in-Residence participating in a partnership between MatadorU and Adventure Center. During 2011/12, Adventure Center is sponsoring eight epic trips for MatadorU students and alumni.]

Tagged
Travel Adventure Center: Travelers-in-Residence
What did you think of this story?
Meh
Good
Awesome