The theme of this year’s Travel & Words Conference for Pacific Northwest travel writers was “sustainable, green travel and tourism” – something that struck me as ironic as I sat in a room filled with journalists, editors, and travel PR folks who had most likely clocked hundreds of thousands of collective miles in jet fuel since the start of the year.

We discussed what ‘sustainable’ means, examining the United Nations definition of the word: “Meeting present needs without compromising the ability of future generations to meet their needs.” We listened to panels and sat in roundtable discussions that covered everything from food photography to pitching magazines, but all with the shared angle: “How do we do these things in a way that is mindful of sustainability?”

I left the conference with a few concrete ideas and an invitation to visit the Long Beach Peninsula in southwest Washington, where I might put those ideas into practice.

Long Beach is where Lewis and Clark first laid eyes on the Pacific Ocean, ending their journey. It’s a 28-mile-long arm of land with state parks, wildlife refuges, museums, and people who seriously know their stuff when it comes to sustainable (and delicious) food.

That was actually the theme of my visit to Long Beach – “Dining at the Source,” an itinerary that included cranberry farms, seafood markets, and clam digs. My New Orleans upbringing dictates that even though I’m open to trying nearly any food, if fresh seafood is available all other menu items may consider themselves pwned. I arrived on the peninsula with a personal challenge in mind – eat oysters at least two meals a day.

Rise of the shellfish

“The last remaining oyster station in Oysterville.” That’s how Oysterville Sea Farms was described in my itinerary. It sounded so desolate and hopeless, an epic oyster dystopian. If even Oysterville only has one oyster station left, what hope is there for all of shellfishkind? I wondered how the recession was affecting all of these small, local businesses who relied so heavily on tourism.

Not so bleak, it turned out. Every chef I spoke with, every farmer and gardener who proudly showed me the results of their hard work, all shared one thing in common – growth. 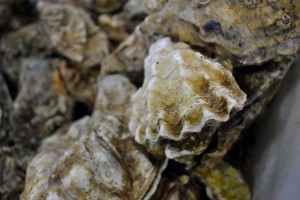 Like Jeff McMahon, who moved around the kitchen preparing a beautiful soufflé and explaining how the Pelicano Restaurant is now offering seasonal cooking classes, with room for up to 25 students per class. Or Jimella Lucas, who fed us the succulent oysters that have made her Klipsan Market Café locally famous, then led us out back to show us the new, thriving community garden behind the restaurant. Or Teri Dodson, owner of the wonderfully tiny Tuscany Cafe, who is expanding into the catering world with her new project, Beach House Catering Company.

And won’t someone think of the oysters? I spoke with Bob Moore, retail manager of Oysterville Sea Farms, the now-infamous (in my mind) “last oyster station.” Struggling? Far from it.

“Our expansion has really been customer motivated,” he told us. We stood out on the back deck overlooking the bay; a family sat around a nearby table, eating chowder and baskets of fried oysters. “They wanted food, so we started serving food. They wanted to have a microbrew or a glass of wine with that, so just last year we brought in Mt. Baker Vineyards. We carry their wine exclusively, and we have our own blend that Dan (Driscoll, owner) and the owner of Mt. Baker Vineyards came up with – we call it Oyster Blanc.”

“And the oysters?” I asked, stuffed from my own oyster lunch but still concerned about an oysterpocalypse.

“The oysters are done by the bushel, and we probably harvest, on average, 50 to 100 bushels a week,” Bob said. “We probably do at least 7 or 8 thousand pounds of clams a year.”

The Washington Department of Fish and Wildlife regulates razor clam digs strictly; each digger must possess a permit and is strictly limited to 15 clams each. The last dig of the season fell on my last day in Long Beach, and a local resident named Sue was kind enough to show me how to use a clam gun and find the telltale “donut” in the sand that indicates a clam is hiding. 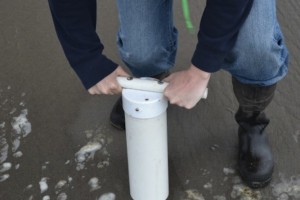 Sue dug her limit in less than half an hour – for me, it took most of the morning. It was drizzly and gray, and hundreds of people wandered along the beach in thigh-high rubber boots and hoodies, stopping every minute or so to stab their clam guns into the sand and twist.

“What’s your favorite way to prepare your clams?” I asked Sue. She pointed to a donut.

“Fritters,” she said, watching as I twisted the gun. “Oops, think you cracked the shell there. Did you hear that?”

I pulled the gun out and the broken clam fell out, along with a pile of wet beach.

“It’s alright.” She picked it up, brushed it off and tossed it into my net. “Yeah, I have a really good recipe for razor clam fritters. I can give it to you if you’re interested.”

I drove home with an ice chest full of Long Beach razor clams, most of them whole. Sue’s fritter recipe was delicious.

If you get to spend some time on the peninsula, witness the community’s expanding food scene for yourself at one of these spots.

I enjoyed both breakfast and dinner here, and yes, both meals included oysters. Specifically, pan-fried oysters with herb scrambled eggs and baked oyster half shell with spinach, mushrooms, and parmesan cream as a dinner starter. The scallops with fiddlehead ferns were also delicious.

The menu is seasonal but may include rockfish filet, Chinook salmon, seafood chowder, and braised pork back ribs. While I didn’t get to sample it myself, others in my group raved about the hazelnut meringue and Grand Marnier ice cream sandwich with cherry sauce.

Cranberries are native to the area, and once I managed to stop stuffing my face with oysters to try some, I discovered my love for this fruit is stronger than I originally thought. Walking tours are available, and you can find jellies, chocolates, cake mixes, and more in the gift shop. The cranberry creamed honey I took home was gone all too soon.

“Have you been to Jimella’s yet?” Once two Long Beach chefs had asked me this on two separate occasions, I knew this place would be something special. Not only can you get exquisite baked, pan fried, or raw oysters here, you can also buy them fresh by the bag to take home. And Nanci’s incredible desserts are the only thing I can imagine worthy of topping of a meal made by Jimella.

This is the only deeded tideland in the world. Owner and oysterman Dan Driscoll has enhanced the area with gravel to attract the clams, because the flats are mostly mud, which suffocates them. While oystermen on the east coast or on the Gulf call themselves harvesters, these guys are farmers because they work the grounds. “There’s no big mills, no ship building, no ship traffic, no oil rigs,” Bob stated. “This is one of the last pristine bays left in North America.”

Tuscan fare served up in a cafe so small and comfortable it actually demands I use the word cozy. A wonderful rosé, a caesar salad, and a massive plate of pasta with more shellfish than the bay made for an excellent meal here.

The kitchen is on display here, and I sat and gawked while Chef and owner Michael Lalewicz prepared fried artichoke flowerets, Southern Comfort pork shoulder, and pan fried oysters. This is one of those places that makes me wish for a bottomless stomach; when I go back it’ll be to try the Dungeness crab mac n cheese.

This was my last meal in Long Beach – breakfast before the drive home. I opened the menu and spotted the jambalaya omelet, two words I have never seen together but who honestly should have hooked up long ago. The dinner menu includes crab beignets, brandied cream of tomato soup, wild salmon, local razor clams and, of course, oysters.