THE AMERICAN INVENTOR Thomas Edison (1847 – 1931) remains the third most prolific inventor, holding 1,093 U.S. patents. Edison made the light bulb famous but he did not invent the first camera, that honor goes to Louis-Jacques-Mande Daguerre in 1836, although a quick Google search will reveal that photo-optic technologies have existed for many hundreds of years.

Edison did invent the Kinetoscope, or peep-hole viewer, first publicly exhibited May 20, 1891 and displayed the first commercially exhibited motion pictures in the US in 1894. The Kinetoscope model would be the standard of cinematic projection until the advent of video in the 1950’s. 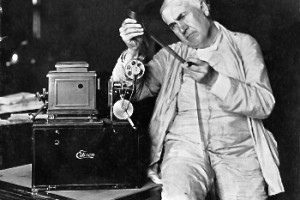 From 1894 to 1918 Edison Studios produced nearly 1,200 films. Among those were some of the first travel films produced. The tourists riding covered wagons through Yellowstone and busy street scenes of Seattle and Chicago are likely the earliest such footage ever captured.

“I am experimenting upon an instrument which does for the eye what the phonograph does for the ear, which is the recording and reproduction of things in motion ….” –Thomas A. Edison, 1888

Enjoy some of Edison’s greatest hits from his earliest contributions to travel film making.

Surely Thomas and crew didn’t think of themselves in terms of ‘travel film producers’ let alone ‘travel video ninjas‘, but they were the first to bring American audiences scenes of London and Paris among hundreds of other hitherto unseen people and places.

With these brief vignettes, audiences were for the first time taken some place through the power of motion picture. Not 100 years since Edison’s Kinetoscope hundreds of millions of people carry tiny cameras in their pockets. Now media permeates our lives and there is more video on YouTube than has ever been broadcast on television, ever.

What is now common place began with a breakthrough that would rightly seem like a marvel of magic.