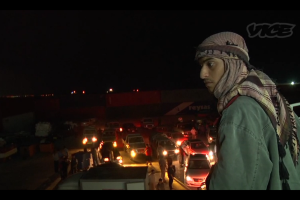 Young rebel fighter on his way to Misrata. Photo by VICE

No matter how much news you watch on TV, you will never see scenes like the ones shown in VICE’s “Rebels of Libya.” VICE’s Shane Smith and camera crew venture to Misrata, a city surrounded by Gaddafi’s forces, to film the Libyan rebels on the front lines. Smith comes away with a story about people fighting for an abstract concept of freedom. Abstract, because many were not born yet when Gaddafi came to power 42 years before.

“I was shocked by how young many of them were. Barely past puberty and fighting with whatever they could find (one guy had a spear gun), they displayed so much heroism and courage that I would tear up while talking to them.”

This film places you right in the center of the conflict and illuminates what keeps the rebels fighting against better weapons and tough odds.

Video created by VICE.com.
Tagged
News Libya
What did you think of this story?
Meh
Good
Awesome