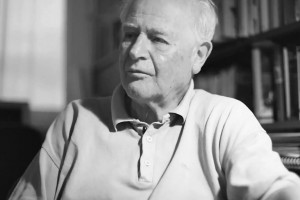 Professor Gerhard Baader in his study in Berlin. Photo by Stuart Holt

The Most Interesting Person Project is a series of interviews in which each person interviewed gives the name of the person they think is the most interesting person they know. That person then gets interviewed, starting the cycle over.

I’ve also included a short interview with the filmmaker.

-How do you choose the first person in each trail, and Prof. Gerhard Baader in particular?
I try and start with people who, as a group, represent the variety of cultural activity in a place in time. In Berlin, this manifested in films of an academic, a visual artist, a musician and a political activist. Professor Baader is the Academic, but of course this label belies the depth of his character. As a Jewish Holocaust survivor and vocal Socialist active during Berlin’s painful and complex transition from Fascism to Communism and Capitalism, he has been victim of, participator in, and witness to, some of the most significant events in modern Western History.

-What was the most important thing you got from your conversation with Prof Baader?
It’s sad that we seem to resent referring to history more avidly in contemporary debate than we do. People tend to think our current context is new, but in fact we appear to be in the midst of an economic crisis and political power shift which is not hugely dissimilar to the economic crisis and political upheaval that was boiling over when Professor Baader was a boy. I think it is in our interest to learn as much as possible about these parallels so we can be equipped to avoid the human suffering that could occur as a result. Professor Baader has done a huge amount to help us draw such parallels.