View all travel news
Top Countries
Top CitiesView All Destinations
Trending Regions
Trending Cities
Load More
The camera is rolling as we orbit the earth, visit the surface of the sun, and surf the rings of Saturn.

THE SURFACE OF THE SUN boils as millions of solar loops the circumference of several earths flicker in and out of existence. In the year 2011, after hundreds of thousands of years of humans and hominids craning their eyes to the sky, we can look upon the sun with such bald intimacy it is nearly startling.

By the time I was old enough to even want to become an astronaut, it was dreadfully obvious (to me at least) that I lacked the brains and fortitude. My moonwalking would have to be in my socks on the kitchen linoleum, but I never lost my wonder for what was up there. 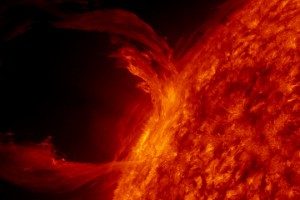 The vid above is less than 2 weeks old, the latest from the folks aboard the International Space Station. Watching it led me to binge on astronomical documentaries, Apollo mission footage, satellite images, Mars rover simulations, Hubble after Hubble after Hubble. In the last 24 hours I have scanned countless videos to find those that evoked in me (the 30-year-old me and the 10-year-old me) the biggest sense of awe.

My criteria was that the video must be actual footage — no computer graphics, no charts, no scientist exuberantly pontificating on coronal mass ejections — it must be real video, as opposed to static images (there goes Hubble), and they must all offer something that juxtaposes and complements the other selections.

What I am left with are groundbreaking images of our sun, bizarre views from distant satellites, melting GoPros launched 22 miles above the earth, and vintage footage of landmarks in our evolution of space travel. Enjoy.

The Solar Dynamics Observatory is one of the most advanced imaging spacecrafts ever devised. NASA’s goal with SDO is to understand how the sun generates and structures its magnetic field and how that magnetic energy is released and affects the earth. What that means for the rest of us is unprecedentedly awesome images of the sun. Just for fun, go to the SDO website and see what the sun looks like right now in 20 different spectra.

Where does ‘space’ begin? The distance agreed upon is 100km straight up, and in 1946 a V2 Rocket launched from White Sands, New Mexico, penetrated that barrier and brought back black-and-white footage of the earth from space and the rocket’s tumbling descent back to terra firma. This was the first glimpse that the world at large had of the earth from space.

Compare this vintage footage with the GoPro video below. They are very nearly one and the same — separated by 65 years and a vast gulf of technological advancement.

There are now dozens of amateur space videos online. Any smarter-than-average person with a few hundred bucks and some free time can devise a balloon or rocket that will penetrate the space barrier and bring back footage of the swirling blue against the infinite black.

It almost looks fake. The Vietnam War-era footage of the cosmonaut has the herky-jerky quality of bad stop-motion animation. But to the chagrin of the American space program, the space walk was real and was a major victory for the Soviet Union in the space race. What strikes me about this video is how vulnerable Alexei looks, how completely out of control his space walk seems. It’s almost cruel to dangle him out there, but someone had to be the first.

Sidenote: Alexei almost didn’t make it back into the craft. His suit was too rigid and he damn near got stuck outside orbiting the earth forever. Upon return, his craft crash landed in the mountains and he was almost eaten by wolves.

On June 30, 2004, the Cassini spacecraft entered orbit around Saturn to begin the first in-depth, up-close study of the ringed planet. The footage in “Cassini Mission” was captured by NASA and the European Space Agency with the Cassini Imaging Science System.

This is what space travel might look like in a bad dream. I find this video to be extremely haunting. It’s like David Lynch on crack on Saturn.

All hail Semiconductor! Taking thousands of pieces of raw solar data made available via open-access archives, Semiconductor has brought together some of the sun’s most captivating unseen moments.

The filmmaker on the process of creating “Brilliant Noise”:

These images have been kept in their most raw form, revealing the energetic particles and solar wind as a rain of white noise. This grainy black and white quality is routinely cleaned up by NASA, hiding the processes and mechanics in action behind the capturing procedure.

Most of the imagery has been collected as single snapshots containing additional information, by satellites orbiting the Earth. They are then reorganised into their spectral groups to create time-lapse sequences. The soundtrack highlights the hidden forces at play upon the solar surface, by directly translating areas of intensity within the image brightness into layers of audio manipulation and radio frequencies.

Skip Marfa for These True Small Town Texas Experiences
The Ultimate Food Tour of New Haven, the Birthplace of American Pizza
This Historic Castle Distillery Is the Best Place To Drink in Kentucky Bourbon Country
The Truth About Artificial Vanilla Extract (and Why You Should Always Splurge for Pure)
Watch: Here’s Why Campfire Smoke Always Blows in Your Face