Casa Malca, in Tulum Beach, Mexico, is one of the most luxurious hotels in the area. It has five-star ratings across multiple booking platforms and the building itself has been carefully renovated to preserve its original charm. Casa Malca’s unique architecture stands out against the lush tropical surroundings, boasting breathtakingly beautiful views of the Caribbean Sea. It also has some pretty unique features, like multiple oversized modern art installations — and a hidden underground pool.

The high-end Casa Malca is in Tulum but a bit removed from the crowds of Tulum’s beach clubs as it sits at the southern end of Tulum Beach. It’s walkable to restaurants and shopping but backs to a nature preserve, rather than hotels filled with hip 20-somethings. 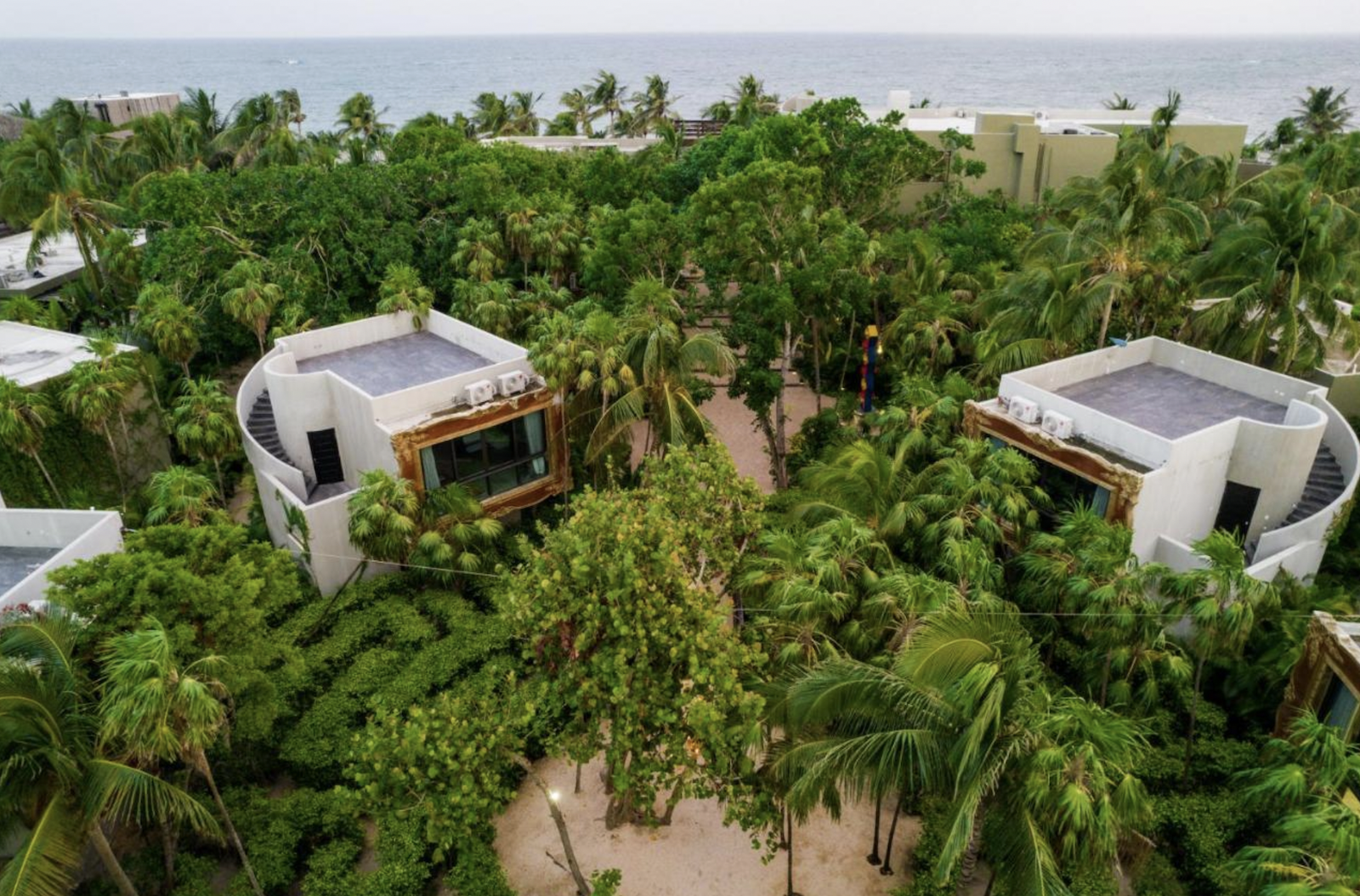 The history of Casa Malca 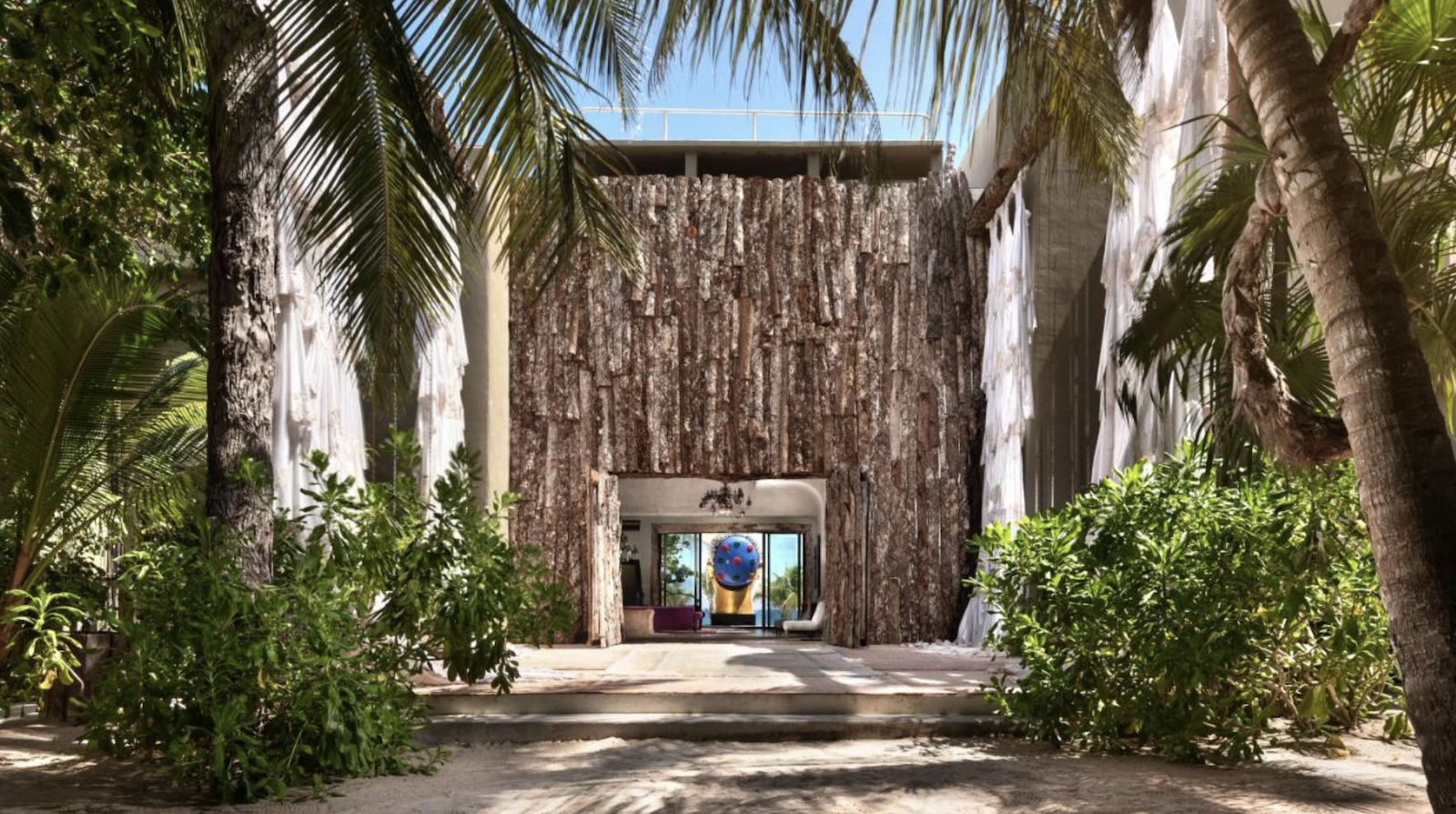 Casa Malca is steeped in history, having been passed down through generations of the same family for over five decades. The hotel was formerly known as Palacio de las Salinas and served as a private residence until 2012 when it was converted into a boutique luxury hotel. Casa Malca does an excellent job of preserving the historical essence of the property while providing guests with modern amenities.

But of course, Casa Malca’s most famous owner was surely Pablo Escobar, a Colombian drug lord who was one of the most notorious criminals of the 20th century (and who the popular netflix show Narcos was about). He led the Medellín cartel, which was one of the most powerful and violent criminal organizations in history. Escobar was responsible for the production and distribution of large amounts of cocaine and other illicit drugs, and he used his wealth and power to corrupt politicians, law enforcement officials, and others in positions of authority. He was eventually killed in a shootout with police in 1993, but his legacy as a notorious drug lord lives on.

However, Escobar’s actions did make him one of the wealthiest men in Central America, and he owned many properties in multiple countries. Casa Malca was a vacation home for his family, though it sat unused for many years after his death. The current owners updated it to its current glory, adding more rooms, introducing contemporary art, and updating the property to include features like a full-service spa. Nowadays, guests come for its luxurious amenities, stunning surroundings, and commitment to preserving Mexican culture and history – making it an unforgettable.

The pools at Casa Malca 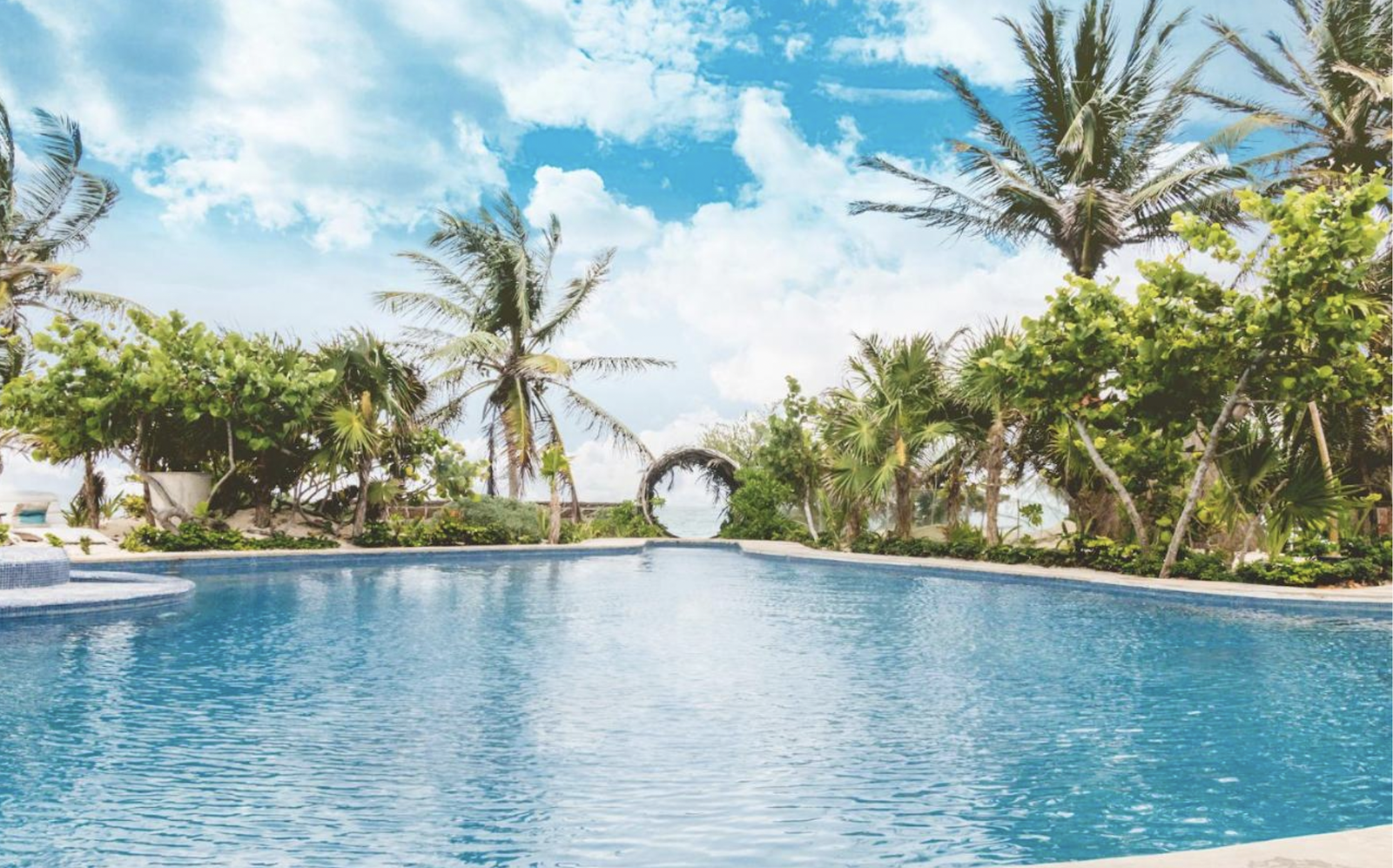 The pools at Casa Malca are some of the most spectacular in all of Tulum. Casa Malca has three different pools (plus the beach, of course) and each has a variety of lounge areas ranging from cabanas to sun chairs to hanging swings and hammocks. Options for swimming include the shallow yellow-tiled infinity pool, the main pool surrounded by swaying palms, and the underground blue grotto pool. Naturally, there’s drink and cocktail service available at all the outdoor spaces.

Getting to Tulum and what to do

Tulum is a popular tourist destination in Mexico, known for its beautiful beaches, Mayan ruins, and eco-tourism. If you’re coming to Casa Malca from the US, the easiest route is to fly to Cancun and take a bus or shuttle to Tulum. Cancun is the nearest major airport to Tulum and has direct flights from many cities in the US. The drive to Tulum beach usually takes about 90 minutes, though traffic in Tulum Beach proper usually moves pretty slowly.

Some unique things to do in Tulum include:

The Tulum ruins are a well-preserved Mayan archaeological site sitting at the northern part of Tulum beach (so you’ll probably want to bike there, rather than walking). The ruins are a popular tourist attraction and offer a glimpse into the history and culture of the ancient Mayan civilization.

Tulum is home to a number of beautiful cenotes (natural sinkholes) and underground rivers that are popular for scuba diving. There’s also lots of tropical ocean diving just north in Playa del Carmen, Canun, and Cozumel. Most of the diving is beginner-friendly, with great visibility and few currents. You can even dive with sharks if you visit during the right season in Playa.

Though many cenotes are known for freediving and scuba diving, there are plenty that guests can visit just for swimming and snorkeling. These natural sinkholes are filled with crystal-clear water and are a unique and beautiful natural attraction in Tulum. You’ll find cenote tours in the area and many hotels and bars may even have their own on-site cenotes.

Tulum is known for its laid-back, bohemian atmosphere, and yoga is a popular activity in the area. There are many studios and retreats that offer yoga classes and workshops for all levels, and you’ll also find yoga retreats at the various beach clubs and hotels along the sand. Many of the beach clubs are more focused on wellness than partying.

About two hours from Tulum is Chichen Itzá was one of the largest Mayan cities ever built and is a sprawling complex with multiple temples, buildings, and more. You’ll probably want to go with a tour guide to this UNESCO Heritage Site as there’s not a ton of on-site signage. Casa Malca’s concierge can assist with booking tours.

How much does Casa Malca cost per night? 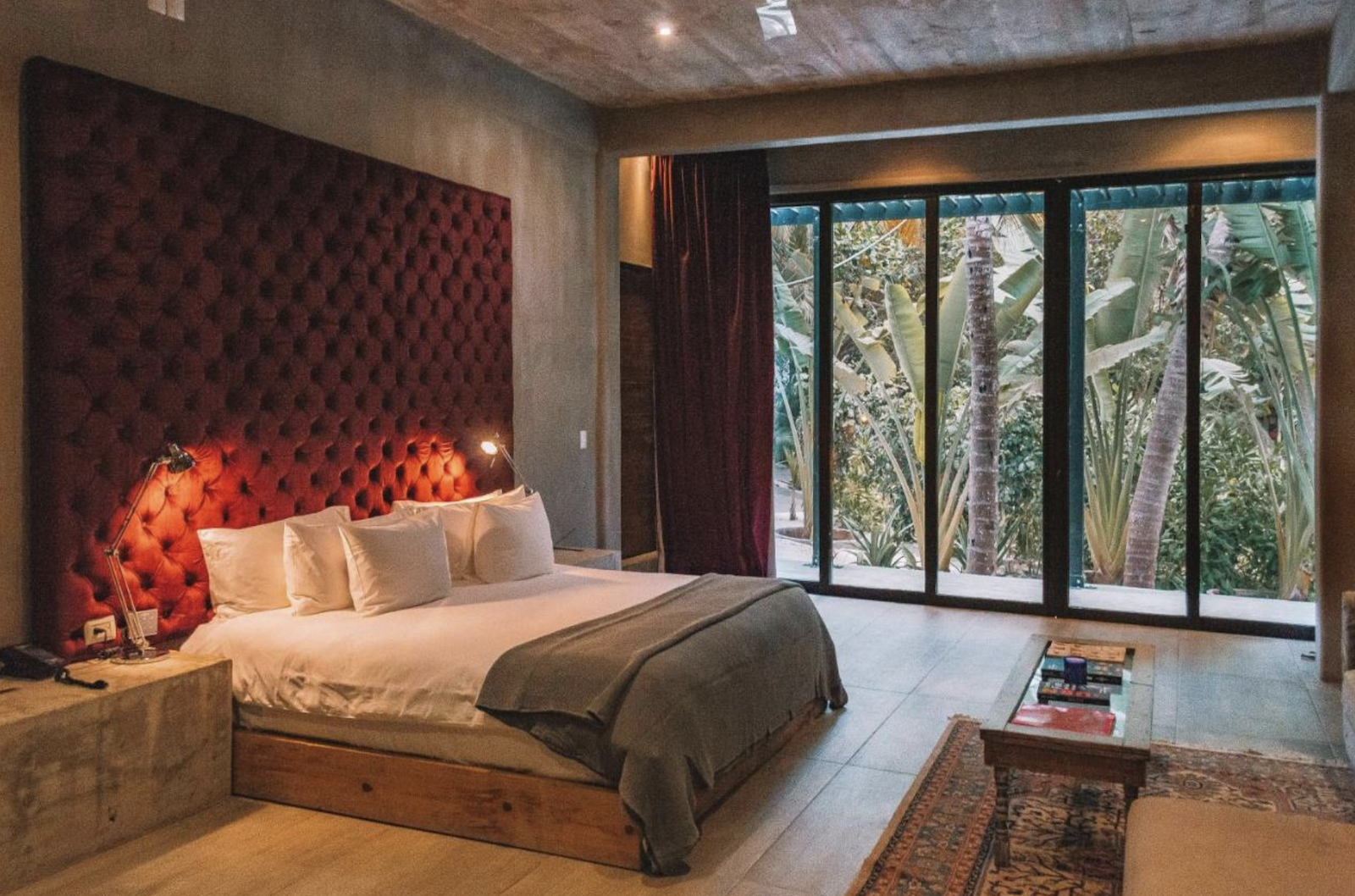 Casa Malca is a luxury hotel and priced accordingly. And in general, Tulum is one of the most expensive destinations in Mexico. Casa Malca offers a variety of different rates depending on the type of room and package, but generally, you should ecpect to pay around $500 per night for a basic suite with two double beds. Rates can go up to over $2,000 per night for a luxury suite with its own private pool.

Epic StaysThis Mexico Hotel Has Hands-Down the Coolest Outdoor Bed in the World
Tagged
Epic Stays
What did you think of this story?
Meh
Good
Awesome